A frail Jack Charlton is sitting at home towards the end of his life as wife Pat tells him about the letters still sent in by adoring Irish fans remembering the two great World Cup adventures and beating England at a major tournament.

‘They think a lot of you, don’t they, in Ireland,’ she says soothingly. Jack’s blue-chip eyes look confused behind a pair of spectacles before the response finally comes: ‘No idea.’

Dementia is one of the subjects covered in a wonderful and poignant documentary Finding Jack Charlton that airs 9pm tonight on Virgin Media One. 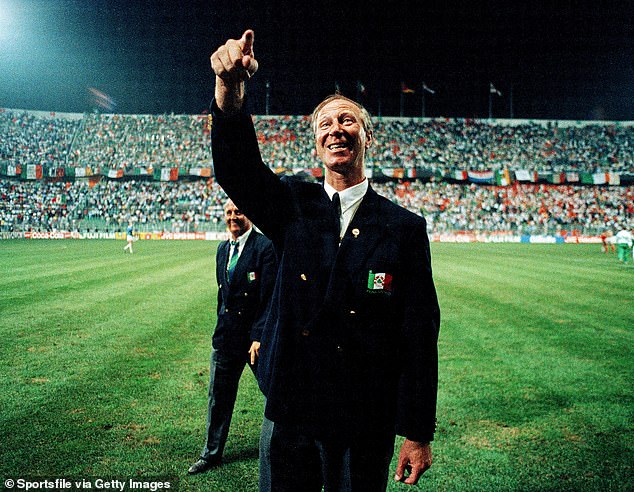 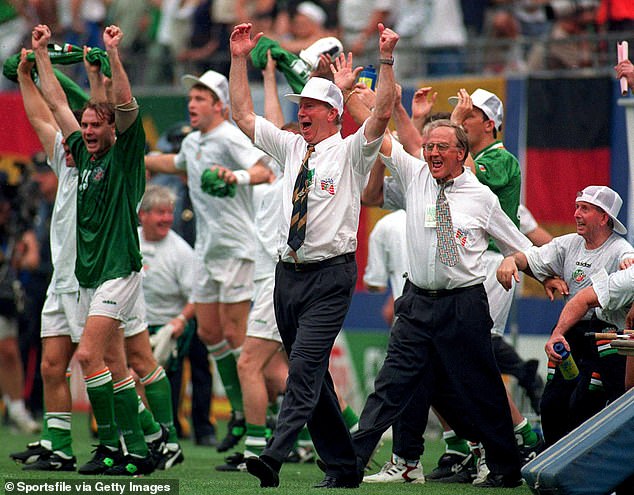 So too is the rift between Jack and Bobby, the two Charlton brothers from Ashington who won the World Cup together.

And his remarkable 10 years as manager of the Republic of Ireland, which will be his defining legacy, with his centre-forward Niall Quinn acknowledging: ‘Jack showed you could be English and be in loved in Ireland. Being a man of all people, he played his part in the peace process.’

As his son John put it: ‘He did more in his lifetime than people do in 10. I don’t think there is anything he regrets.’

Dementia is an important issue of our time and by allowing the cameras to roll as Jack declined before his death from lymphoma last June, the Charlton family have allowed for a uniquely insightful documentary to be made.

Once famed for his robustness – ‘I was a batterer, a destroyer, a fouler,’ he admitted candidly on the Parkinson show – this Jack is reluctant to step outside to feed the ducks because he feels the cold. He has to be reminded on returning home to remove his coat and hat. 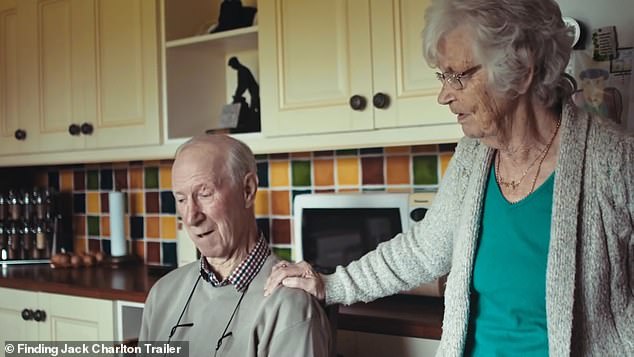 Towards the end of his life the former Ireland manager, pictured here in Finding Jack Charlton, couldn’t fully remember the success he had as a player and boss

But there are beautiful scenes too, playfully giving a sweet to his grand-daughter, or fishing again with John and casting expertly. When Jack died last summer aged 85, there was a sense of relief the cancer had taken him before dementia could rob him of all faculties.

‘He’s not the same Jack,’ explains Pat during the documentary as she adjusted to the role of full-time carer.

‘Every now and again you see bits of him, it’s just his memory is not there. Dementia. I didn’t want him to know. I just wanted him to think he’s got a bad memory. And his stock in trade is “I’ve no idea”.

There is a moving scene where Jack looks at old footage on a laptop and recollects Paul McGrath, his best and favourite player. There are also tears when Jack views himself singing Blaydon Races in front of the Irish squad at the Italia ’90 World Cup, the tears because he can’t recall the moment. 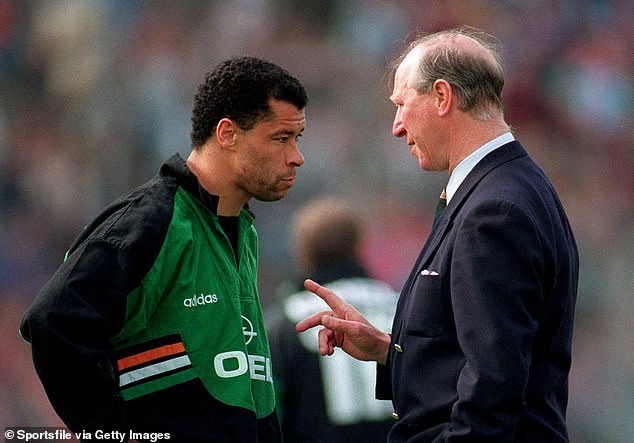 What a life John ‘Jack’ Charlton had, leaving his mining roots in the north-east of England to conquer the footballing world and become a national treasure twice over. He won the World Cup with England as a player in 1966 but believes his achievements as Ireland manager overshadowed even that.

They certainly thought so, granting him honorary citizenship, though Great Britain never gave him the knighthood Bobby received.

Interestingly, 1990 appears more important than 1966, which tallied with Jack’s own view of his achievements. ‘The joy for me was what we achieved in Ireland,’ he acknowledges.

Ironically, the special relationship didn’t start that well. FAI President Des Casey reveals he needed to call Jack three times to even get him interested in considering the job. 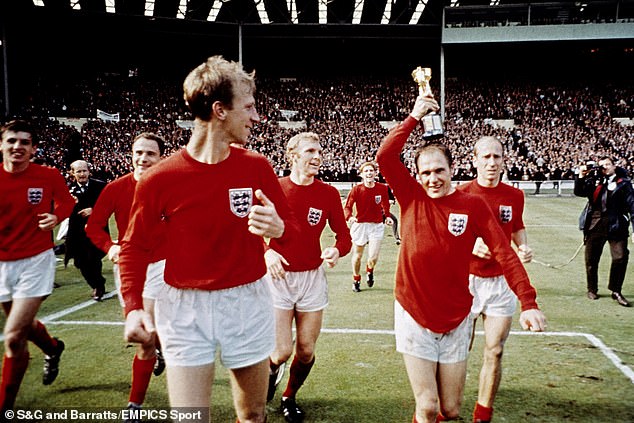 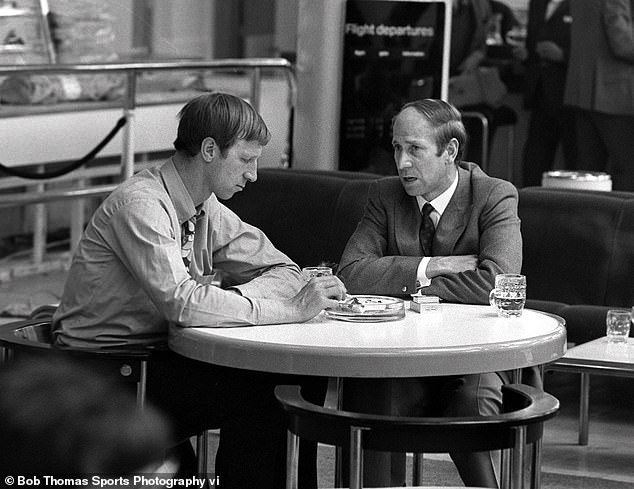 But the two Charlton brothers, from Ashington, were too different to be close-knit

Once appointed, the Irish nation wasn’t exactly cock-a-hoop at having someone over the water. ‘I was disappointed,’ admits McGrath. ‘Why would we need an Englishman of all people to run our soccer team.’

The Charlton family have kept hundreds of notes scribbled by Jack over the years, ranging from family matters to football tactics and philosophy. Particularly instructive was the one that said: ‘Be a dictator but be a nice one.’

Jack’s Ireland sacrificed style for substance and he demanded his talented players chased and harried the opposition into making mistakes – a forerunner to today’s press.

Dissenting voices were blown away as Ireland reached Euro ’88, their first ever major championship, and then beat England in their first game.

It was clear from this programme that represented payback for Jack, who had once applied to be England manager and got no reply because the FA bigwigs didn’t like him.

‘It had been Jack’s ambition to manage England,’ reveals Casey. ‘Their chairman Bert Millichip told me, “Des, I fear you’ve made a very grave mistake appointing Charlton”.’ 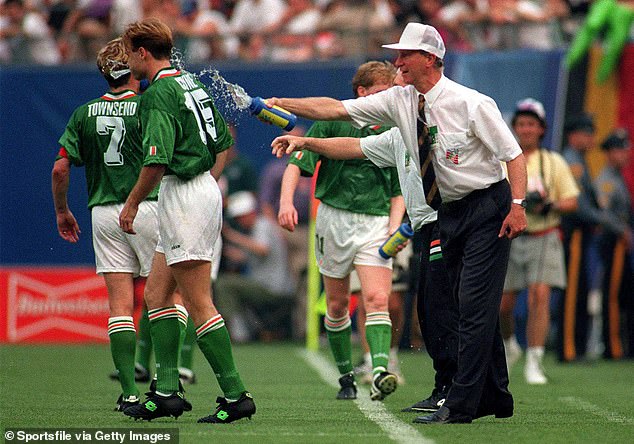 The momentum in Ireland engineered by Jack changed them as a country following a decade of economic turmoil, mass emigration and IRA terrorism.

Violent republicanism had claimed the Irish Tricolour flag as their own but that began to alter when thousands of normal citizens packed stadiums from Rome to New York to support Big Jack’s team.

‘We took that flag back and flew it with pride. Jack Charlton did that,’ said drummer Larry Mullen of rock band U2.

‘Jack changed the whole trajectory. It didn’t take for a lot for people to grab onto because it was the only good news.’

In Dublin, 500,000 people came out to greet Jack’s heroes when they returned from Italy having reached the quarter-finals. ‘I’ve never been present at the end of a war but it did have that feeling,’ recalls renowned author Roddy Doyle about the ecstatic homecoming.

Comedian Brendan O’Carroll, later to find fame in Mrs Brown’s Boys, attributed Charlton’s success to the common sense of KISS – ‘Keep it Simple, Stupid.’ O’Carroll discovered Florida by following Ireland at the 1994 World Cup and liked it so much, he now lives there. 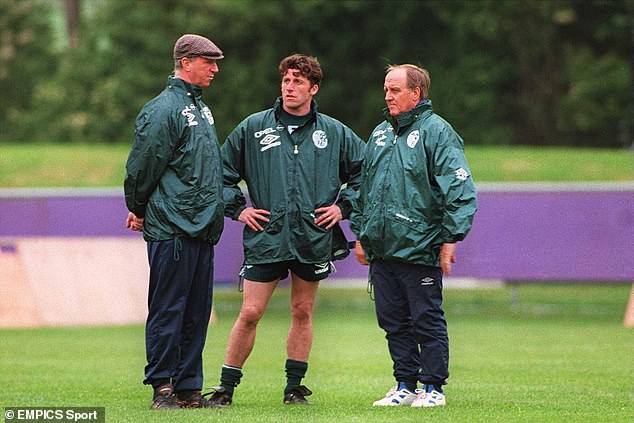 The political sensitivities never went away. The team were accompanied by armoured cars for a qualifier in Northern Ireland, a match against England was abandoned in 1995. Jack’s method of coping was by trying to treat people as people.

Admirably, there is no attempt to whitewash the more dogmatic side of his personality. O’Leary, not Jack’s favourite player, records he received little warmth after the famous Romania win. Doyle says Jack was wrong to bar TV pundit Eamon Dunphy from press conferences because of criticism over playing style.

On the flip side, humanity and humour were integral parts of Jack’s character. Relating how the future Mr and Mrs Charlton were introduced, their son John says: ‘They met at a dance. He told her he was Jack Charlton and played for Leeds United. She said she was Doris Day and she was a film actress! Without her, he wouldn’t have been as successful as he was.’

Pat saw his behaviour change post-dementia. He’d become more emotional. In the film, he was visibly affected during a visit to support the Northumberland disabled anglers.

Interestingly, she isn’t sure he would have wanted to change anything. ‘When Jack first played, the balls were heavy. Whether it was heading the ball as much as he did, we don’t know. It is like boxers getting hit in the head. 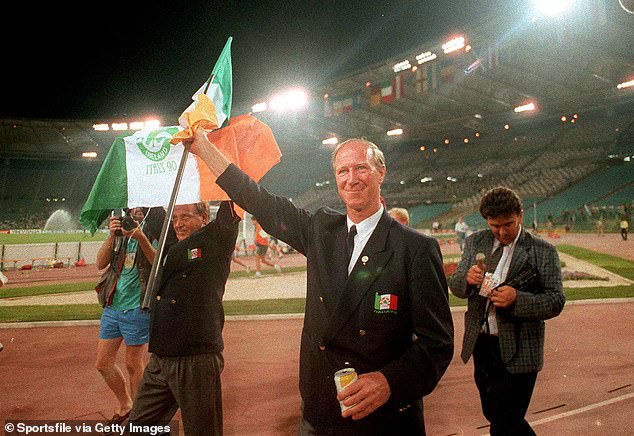 ‘He has enjoyed his football. Would you take that away from him? I don’t think so.’

The reality is Jack and Bobby were too different to be the close-knit brothers Hollywood script writers would have preferred.

‘Everyone in Ashington would tell you Bobby Charlton was going to play for England. Our kid had everything,’ said Jack, who was the gruffer and more uncompromising of the two.

There is a brilliantly awkward TV meeting between them in the 1970s when they were managers of opposing teams, Middlesbrough and Preston.

Jackie the outdoor hunter/gatherer gives Bobby some dead game as a well-meaning gift. Bobby, the more polished superstar, just about accepts with as much grace as he can muster.

‘There would be something on the TV and Jack would make a comment as if “Bobby doesn’t know that, he’s wrong”,’ says Quinn about their later relationship. ‘There certainly wasn’t a pouring of affection for his brother.’

For the family, there is comforting footage from the 1990 World Cup when Bobby interviews Jack for the BBC and tells him how proud he is of his brother. ‘Fantastic,’ said John, emotional watching. ‘The sad part about it, I haven’t seen my Uncle Bobby for a long, long time.’

McGrath’s contribution is essential to the programme and getting to the core of Jack Charlton.

As part of Ireland’s minority black population, McGrath used sport to beat racial abuse but later faced severe problems fighting alcoholism. Big Jack always stuck by him and, extremely rarely for him, apologised when he’d been too severe.

‘Jack Charlton defined my life,’ said McGrath. ‘He understood that I loved him.’

Finding Jack Charlton is on Virgin Media One at 9pm on Sunday March 28.