TV legal star Robert Rinder has offered a reward for the recovery of his mobile phone after he was mugged on a London street.

The star of Judge Rinder said he was targeted by three boys wearing balaclavas on bicycles in South Hampstead. 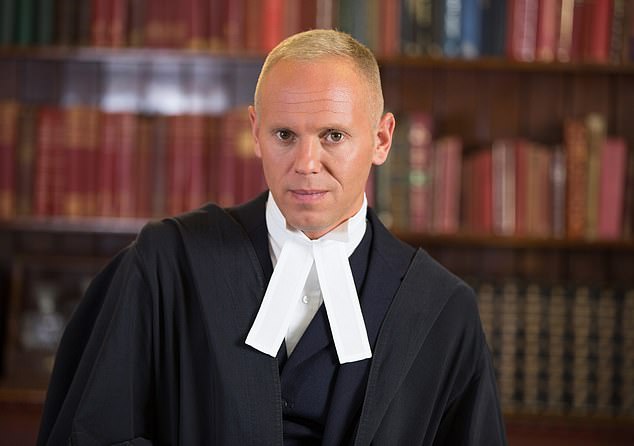 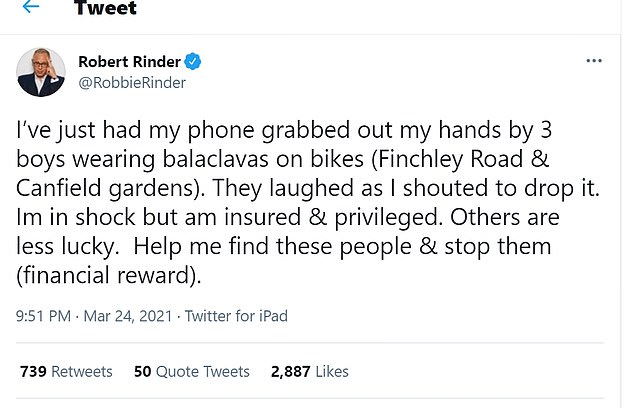 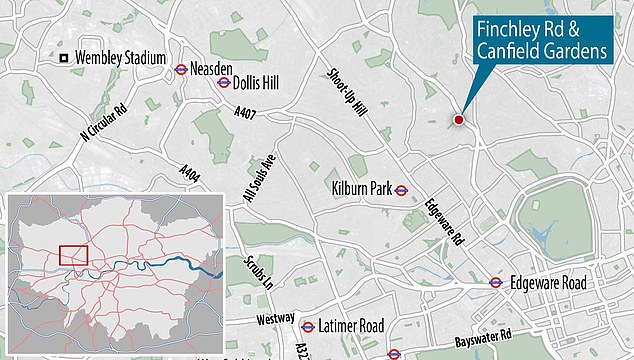 ‘They laughed as I shouted to drop it. I’m in shock but am insured & privileged. Others are less lucky. Help me find these people & stop them (financial reward).’

A Scotland Yard spokesperson told MailOnline: ‘Police are investigating after receiving a report of a theft at approximately 20.40 hrs on Wednesday, 24 March on Finchley Road.

‘Three males dressed in black approached the victim and took his mobile phone.

‘Enquiries are on-going. No arrests at this early stage.’

Last weekend, Rinder was been named winner of ITV special All Star Musicals after dazzling with his rendition of Be Our Guest from Beauty And The Beast.

Rinder opened the show dressed as candlestick Lumiere and impressed the expert panel of Elaine Paige, Trevor Dion Nicholas and Samantha Barks with his showmanship.

Nicholas told Rinder he was ‘dripping with showbiz glitz and glamour’ while Paige praised his ‘pristine’ vocals and said he was ‘guilty of an excellent performance’.

The judges gave him 30 stars out of a possible 30.

He was named winner of the show after the scores of the expert panel were combined with the votes of the virtual studio audience.

Rinder said: ‘I was watching backstage and the talent, the beauty, the enthusiasm and the joy of everybody, I’ve had the best time ever and have done it in front of people I admire so much.

‘Open the theatres and bring us more joy.’

During the show, broadcaster Peston performed Luck Be A Lady from Guys And Dolls.

Afterwards he said: ‘That was the scariest thing I’ve ever done by quite a wide margin.’

Barks told him: ‘You did not make a fool of yourself at all, this is so different from the guy I’m used to seeing on my TV giving politicians a hard time.’

Walsh performed Flash Bang Wallop from Half A Sixpence, while Hynes performed When You’re Good To Mama from Chicago, and Singh sang Come What May from Moulin Rouge.

Bradshaw-White performed This Is Me from The Greatest Showman.

The programme, hosted by John Barrowman, also featured a performance by Carrie Hope Fletcher from the new musical Cinderella.

The Met Police said mobile phone theft is a major problem in London with thousands of devices taken each year.

Traditionally, thieves would pickpocket their victims or use table surfing.

However, over the past couple of years the number of thefts involving criminals using mopeds or bicycles has increased dramatically.

The Met advises mobile phone users to be aware of their surroundings to reduce the chance of having their handset stolen, especially in high threat areas.

According to Scotland Yard:

They are also monitoring stores that sell secondhand electronics to prevent them from dealing in stolen phones.

The areas around Camden, Islington, Westminster, Hackney and Haringey have the biggest problems of mobile phone theft.