The Internet has been awash with memes since Bill and Melinda Gates announced their divorce yesterday.

Bill and Melinda Gates, one of the world’s richest couples, are getting divorced – with Melinda saying the marriage is ‘irretrievably broken’ in divorce filings that also reveal the couple have no prenup agreement.

The Gateses fortune of $130billion make them the fourth-richest people in the world, behind Bezos, Elon Musk, and French luxury goods owner Bernard Arnault. 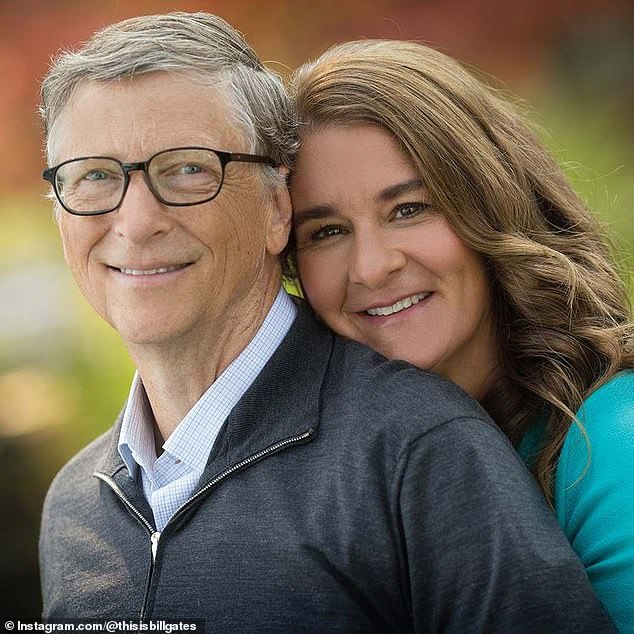 In a joint statement posted to their Twitter accounts on Monday, the pair said their work with the foundation will continue but their marriage will not, adding: ‘We no longer feel we are able to grow as a couple in this next phase of our lives.’

Many have taken to Twitter in the wake of the couple’s bombshell announcement, with the platform inundated with memes, some of them referencing Bill Gates’ technology giant Microsoft. 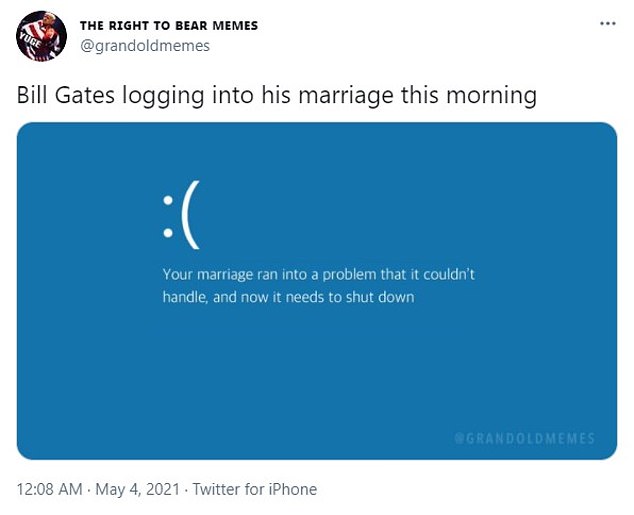 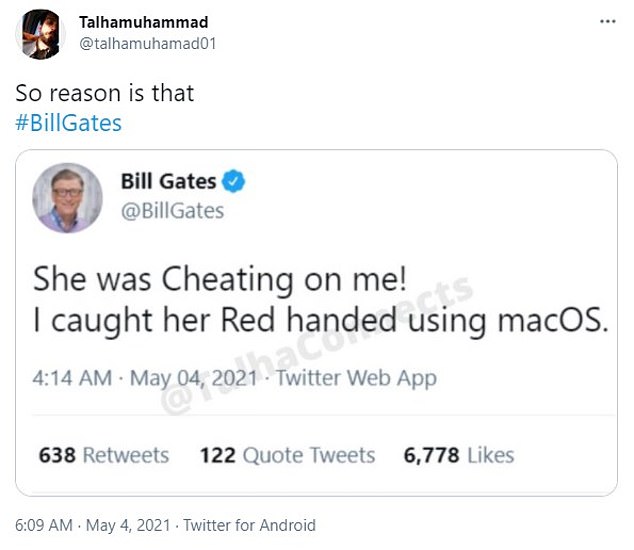 Many have taken to Twitter in the wake of the couple’s bombshell announcement, with the platform inundated with memes, some of them referencing Bill Gates’ technology giant Microsoft

‘Bill Gates logging into his marriage this morning,’ one tweet read, alongside a Microsoft error image reading: ‘Your marriage ran into a problem that it couldn’t handle, and now it needs to shut down.’

Another Tweet read: ‘Are Bill and Melinda Gates really going through a… you know… *windows 98 shutdown sound* divorce?’

One tweet joked: ‘She was Cheating on me! I caught her Red handed using macOS.’

Other Twitter users seemed delighted that Melinda Gates would now be single, with one person writing: ‘So what I’m hearing is… Melinda Gates is single now?’

Referencing Bill Gates’ fortune, one Twitter user suggested that the billionaire’s divorce attorney would be happy with the news. 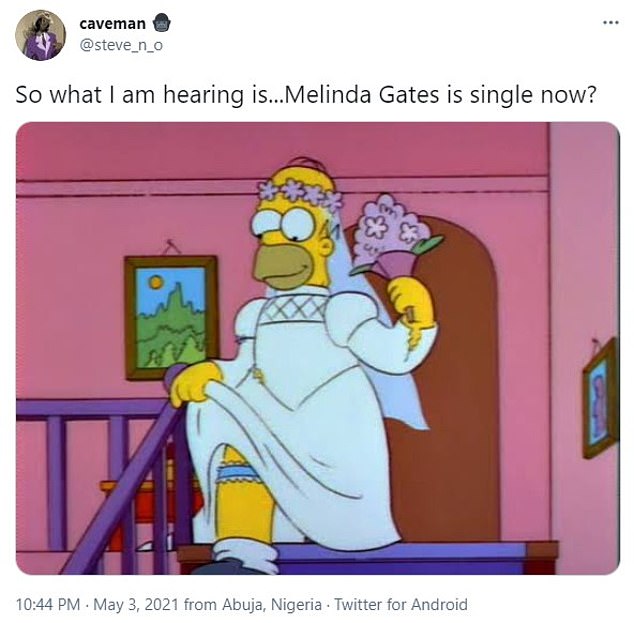 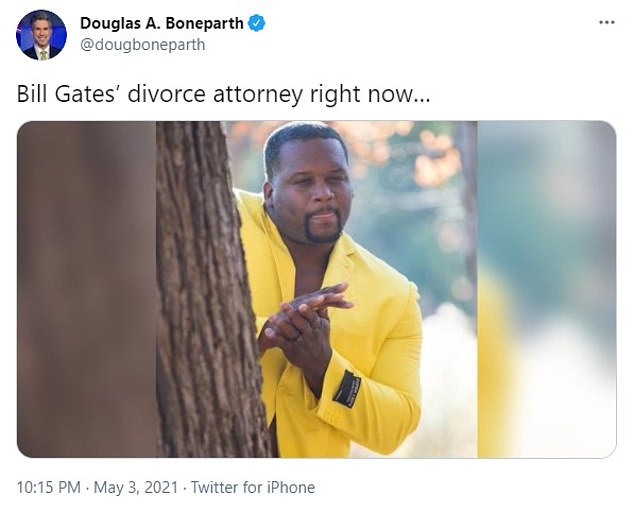 Another meme referenced Jeff Bezos, another billionaire who divorced from his wife in 2019. Jeff kept 75 percent of their joint stake in Amazon – then worth $144billion – leaving MacKenzie with a quarter worth $35.8billion.

While the couple have no prenup, it appears a lot of the work of dividing up their estate – which includes properties in five states, a private jet, an astonishing art collection and a fleet of luxury cars – has already been done, as their divorce papers repeatedly refer to a ‘separation contract’ which both have signed. The contract itself has not been made public.

Bill and Melinda both posted the same joint statement about their divorce on Twitter, which read: ‘After a great deal of thought and a lot of work, we have made the decision to end our marriage. 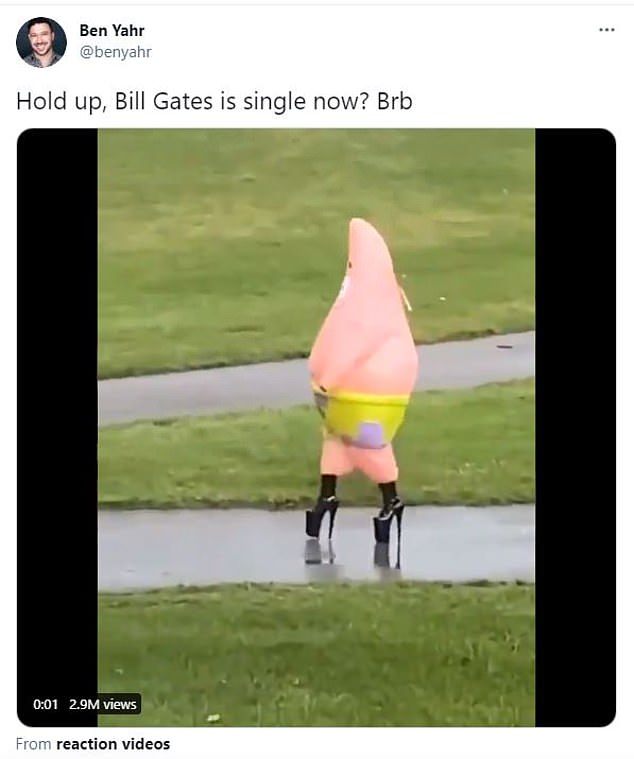 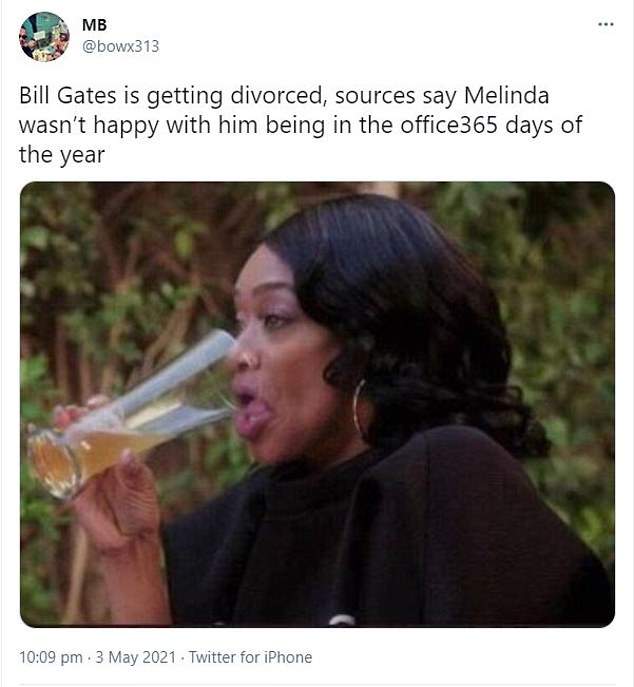 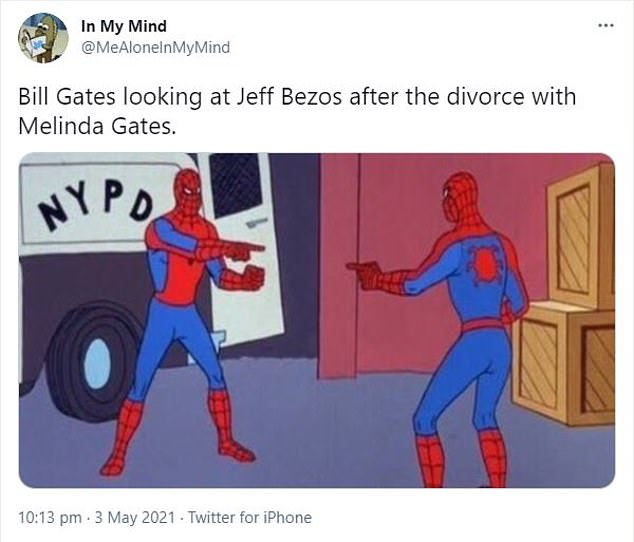 Another meme referenced Jeff Bezos, another billionaire who divorced from his wife in 2019. Jeff kept 75 percent of their joint stake in Amazon – then worth $144billion – leaving MacKenzie with a quarter worth $35.8billion

‘Over the last 27 years, we have raised three incredible children and built a foundation that works all over the world to enable all people to lead healthy, productive lives.

‘We continue to share a belief in that mission and will continue to work together at the foundation, but we no longer believe we can grow together as a couple in this next phase of our lives.

‘We ask for space and privacy for our family as we begin to navigate this new life.’

The announcement comes less than two weeks after they made their last public appearance, virtually, at a COVID event for healthcare workers.

Bill was already a billionaire when he married Melinda in the early 1990s.

He founded Microsoft in 1975 and became the world’s youngest billionaire in 1987 at the age of 31.

He also met Melinda that year when she was working at the company where he served as CEO.