The UK could miss out on millions of doses of the coronavirus vaccine if the European Union suspends deliveries to countries outside the bloc.

Britain is expecting to receive another 9million jabs over the next three weeks from Oxford/AstraZeneca’s factories in Wrexham and Oxford and Pfizer/BioNTech’s production centre in Puurs, Belgium.

But if Eurocrats decide to blockade vaccine exports across the channel, the American drugs company Pfizer will be left unable to ship supplies bound for the UK. This would mean the 3.5million doses from the company set to arrive by mid-February would be stuck inside the EU.

There are fears any cut in deliveries could leave the UK unable to meet its target of jabbing 15million of the most vulnerable by mid-February. This includes the over-70s, vulnerable, NHS staff and care home residents.

AstraZeneca’s boss has promised to deliver 2million doses every seven days over the next three weeks, and Pfizer has also agreed to send 3.5million jabs over the same period of time.

But it is not clear how many doses are already sitting in Britain’s warehouses, which ministers are refusing to reveal because of security concerns. Vaccination figures suggest millions have already been delivered.

The vaccines minister Nadhim Zahawi said today the EU’s threat to block supplies of the Pfizer vaccine would not affect the UK’s stocks, adding he was ‘confident’ they would arrive on time.

And the Health Secretary Matt Hancock warned at a conference last night that supply remained the ‘limiting factor’ in Britain’s Covid-19 vaccine rollout.

The UK has already vaccinated more than six million of the most vulnerable against the virus, as it steams towards its mid-February target. 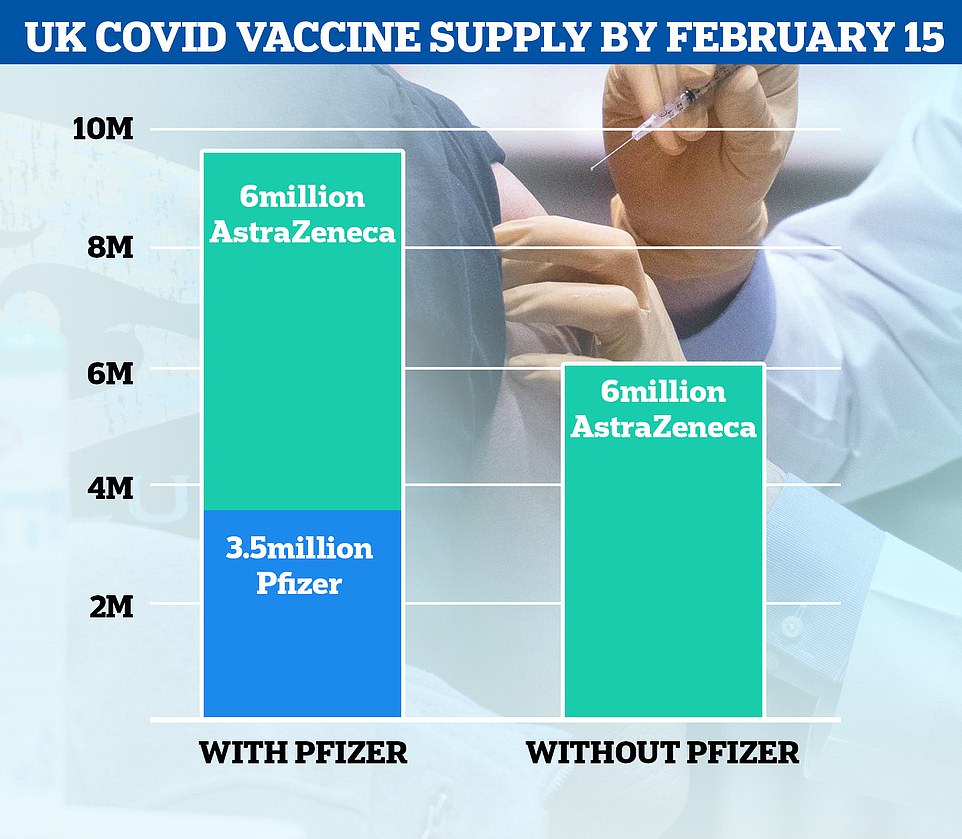 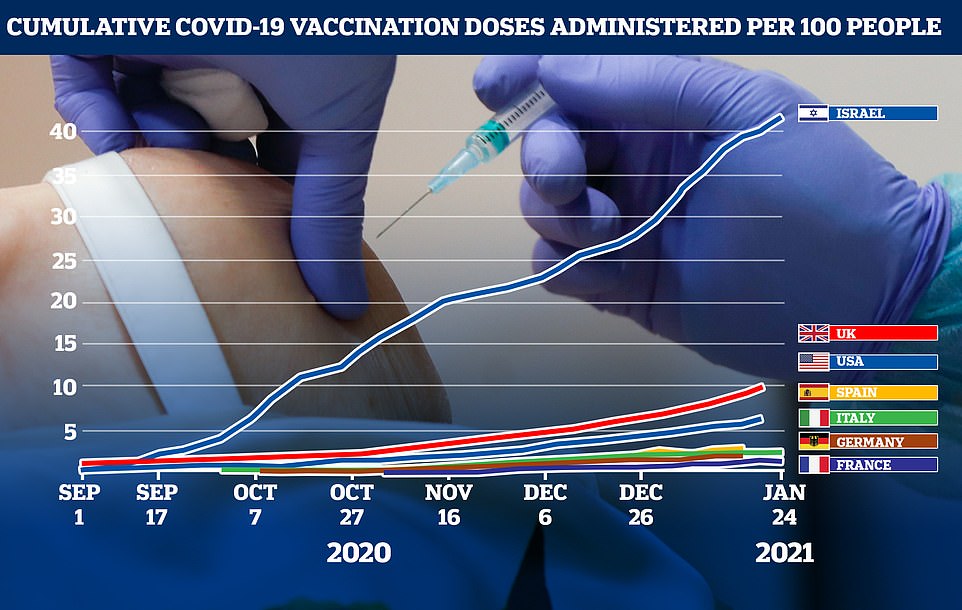 Europe’s vaccine roll-out was already among the slowest in the world, but has been hit by further problems as France’s Pasteur Institute mothballed its jab on Monday and AstraZeneca cut supplies to the bloc by 60 per cent due to ‘supply issues’

Scientists slammed the spurious claim overnight after it was published by German newspaper Handelsblatt, which said government sources had warned the jab only appeared to be eight per cent effective but didn’t publish any data to prove it.

Oxford University rubbished the report, saying there was ‘no basis’ for the allegation, and that their data has already been ‘released transparently’.

AstraZeneca, manufacturing the jab on behalf of Oxford, said it was ‘completely incorrect’.

And scientists added they had ‘no idea’ where the figure has come from, adding that it was not proved by research on the vaccine.

Germany has now confirmed there is no data to suggest the effectiveness of the vaccine is that low and that the European Medicines Agency will decide whether to approve the jab on Friday.

It is not clear where the eight per cent figure emerged, with a political correspondent at the German paper saying senior sources in the government had given it to him without scientific data.

Politico suggests that the study in which the results were published – where eight per cent of people were in the 56 to 69 age group – may have been misread, but this has not been confirmed.

Asked whether deliveries of the Pfizer jab could be delayed, Mr Zahawi said he was ‘confident’ they would be arrive on time.

‘Pfizer have made sure that they have always delivered for us, they will continue to do so,’ he told Sky News.

‘We have got 367million vaccines that we have ordered from seven different suppliers, so I’m confident we will meet our target and continue to vaccinate the whole of the adult population by the autumn.’

He also sought to dampen fears the UK would not meet its target if doses were held up at the border, saying the programme remained ‘on track’.

The minister later told the BBC that supplies were ‘tight’, and ‘lumpy and bumpy’, but stressed deliveries would come through.

Conservative MPs have warned that any delay to vaccine supplies from the EU could ‘poison relations for a generation’.

AstraZeneca is expected to start delivering 2million doses a week by the end of the third week in January, its president Tom Keith-Roach told Parliament’s Science and Technology committee on January 13. If the target has been met, it means the UK will receive six million doses over the next three weeks.

The drugs company had already supplied 1.1million doses by January 1, and initially aimed to hit 2million by January 10.

Pfizer will be delivering a further 3.5million doses by mid-February, reports the Telegraph.

Ministers have refused to reveal how many doses are already sitting in warehouses across the country ready to be sent out to the most vulnerable.

But they have repeatedly warned that supply remains the ‘limiting factor’ in the race to rollout the jabs.

Once delivered, they are transferred to warehouses before being distributed to vaccination centres.

The Pfizer jabs have to be defrosted from -75C (-104F), but those made by AstraZeneca can be kept at the same temperature as a household fridge.

Almost half a million received a jab on record-breaking Saturday, suggesting ministers may have millions of doses already stockpiled to turbo-charge the largest vaccination drive in the country’s history.

It comes amid a bitter feud between the European Union and AstraZeneca over vaccine deliveries, with the company saying it won’t be able to provide the quantities it promised in earlier orders on the original timescale.

In response, the trade bloc – which has not even approved their vaccine – has threatened to halt exports of Covid-19 shots, which could include millions of Pfizer doses bound for Britain.

EU health chiefs have ordered drug companies to tell them when they are exporting to countries outside the union – meaning American giant Pfizer will need to let Eurocrats know when it tries to send doses to the UK.

The jab has already been approved in the UK, as well as Argentina, Dominican Republic, El Salvador, Mexico and Morocco, while Canadian officials have asked for more data before approving the vaccine.

The Oxford jab is cheaper and easier to store than the rival Pfizer/BioNtech vaccine – which is also being used in Germany.

The Oxford vaccine can be stored, transported and handled at normal refrigerated conditions. This is unlike the Pfizer vaccine, which needs to be kept at minus 70C.

But the Oxford/AstraZeneca vaccine came under fire last year when initial tests showed the vaccine was 62 per cent effective when two full doses were given at least a month apart.

This was less than the Pfizer and Moderna vaccines, which were both shown to be 95 per cent effective.

Katherine Schwarzenegger grins from ear-to-ear as she heads to tennis with...

Nun pleads with police not to harm protesters in Myanmar after...