The ‘eye-watering’ salaries being paid to some academy chain leaders is ‘verging on criminality’, a union chief warns.

The new president of the NASUWT teaching union, Phil Kemp, also warns of a ‘Wild West’ school system in England.

He claims education is ‘too often’ in the hands of a small group of academy chain chief executives.

In a speech to the NASUWT’s virtual annual conference, Mr Kemp is expected to hit out at the ‘huge salaries’ of academy chain leaders which he says have ‘little if no impact on student progress’.

Mr Kemp, a North Tyneside teacher who works with pupils who have been, or are in danger of bein, excluded from mainstream schools, will call for ‘significant and targeted funding’ for schools. 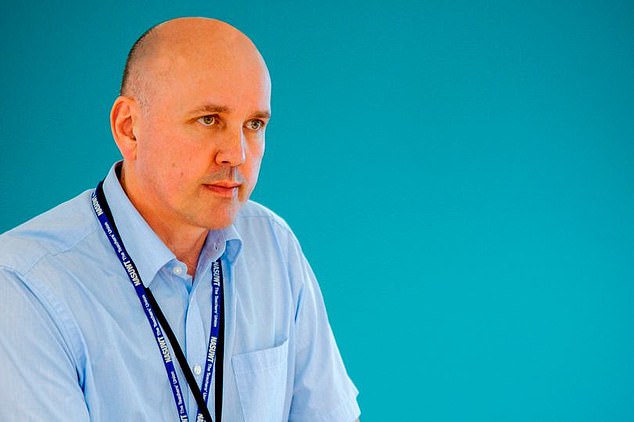 Phil Kemp, the new president of the NASUWT teaching union, slammed the ‘eye-watering’ saleries of some academy chain leaders

He will say: ‘The salaries being paid to individuals in some of these academy trusts is not just eye-watering, it’s verging on criminality in my view.

‘So many salaries, paid for from the public purse, rising over the £200,000 mark, and some well-publicised, almost reaching half a million pounds.’

Addressing the conference on Friday, Mr Kemp will call for the national pay scale for all teachers and heads to be reintroduced ‘as soon as possible’.

Academies, which are state schools that sit outside local authority control, have more freedom over areas such as the curriculum and staff pay.

‘The snouts have to come out of the trough and the public purse protected from those who will take advantage of the increasing deregulation of our education system. Those taking these huge salaries should hang their heads in shame,’ he will say. 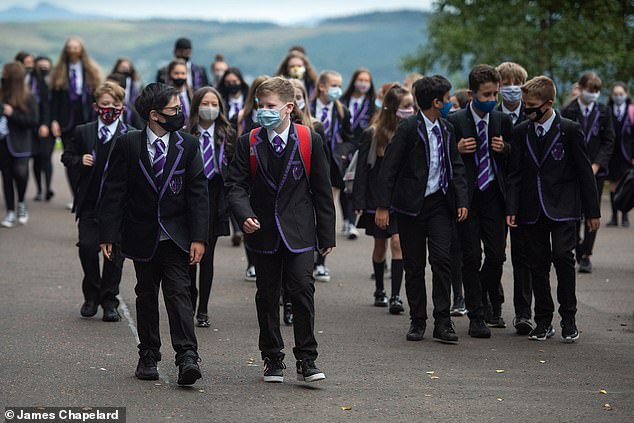 He also warned of a ‘Wild West’ school system in England where education is ‘too often’ in the hands of a small group of academy chain chief executives. Pictured: Pupils at academy school in Scotland, stock photo

Revealed: The ‘eye-watering’ salaries of some academy chiefs in the UK

Phil Kemp slammed the ‘eye-watering’ salaries being paid to some academy chain leaders in his first annual conference speech as new president of the NASUWT teaching union.

An analysis by the union suggests that the combined remuneration of chief executives in the 20 largest academy trusts in 2018-19 was £4.72 million, or an average of £23,000 per chief executive.

An investigation carried out by the The Times Educational Supplement found that academy chain leaders’ salaries can extend into hundreds of thousands of pounds per year.

Accounts show that the former chief executive of Academies Enterprise Trust earned between £285,000 and £290,000.

Two other multi-academy trust leaders had salaries just over the £250,000 mark.

And Star Academies, which runs more than 30 schools in the North of England, has paid its highest earner between £250,001 and £260,000, according to the TES research.

An analysis by the NASUWT union suggests that the combined remuneration of chief executives in the 20 largest academy trusts in 2018-19 was £4.72 million, or an average of £23,000 per chief executive.

The 57-year-old will tell delegates at the conference: ‘Adequate funding for education is so essential – actually, no, not adequate, generous funding, the funding where it’s not paper or glue-sticks, it’s both.

‘Value for money is, of course, vital. But education seems to have become yet another way private companies and individuals can line their pockets whilst head teachers have to penny-pinch and teachers feel compelled to put their hands in their own pockets.’

The union’s president will accuse the Government of taking a ‘piecemeal attitude’ on educational recovery, adding that the catch-up funding announced ‘is not good enough’.

In a report, which has been published as the NASUWT conference gets under way, the union warns that a lack of ‘adequate’ funding for schools in England during the pandemic is placing staff and pupils at risk.

They say they are now beginning to receive reports of planned redundancies, particularly among school support staff who often help with Covid control measures in schools outside lesson times.

Mr Kemp will add that statutory provision of schools-based counselling in every primary and secondary school in England is ‘more than needed in a post-Covid world’.

A Department for Education spokesman said: ‘The overwhelming majority of academy trusts set reasonable, justifiable levels of pay for their leaders, recognising that many will be responsible for several schools within a trust and that we must attract the best leaders to continue raising standards.

‘We consistently challenge trusts where we deem executive pay to be too high, and will continue to do so when it is neither proportionate nor directly linked to improving pupil outcomes.’