BREAKING NEWS: US Department of State will issue ‘do not travel’ advisory for 80% of countries due to COVID-19 risk

The U.S. Department of State announced on Monday it will issue  ‘Level 4: Do Not Travel’ advisory, its highest warning, for about 80 percent of countries.

In an official statement, the agency said the risk of COVID-19 risk while traveling remains to high and urged Americans  to ‘reconsider all travel abroad.’

This does not imply a reassessment of the current health situation in a given country, but rather reflects an adjustment in the State Department’s Travel Advisory system to rely more on CDC’s existing epidemiological assessments,’ the statement read.

Level 4 is generally reserved for war-torn countries or nations that would be hostile to Americans such as Afghanistan and North Korea.

Most countries are currently listed on the State Department website with a ‘Level 3 Reconsider Travel’ warning, the second-highest alert. 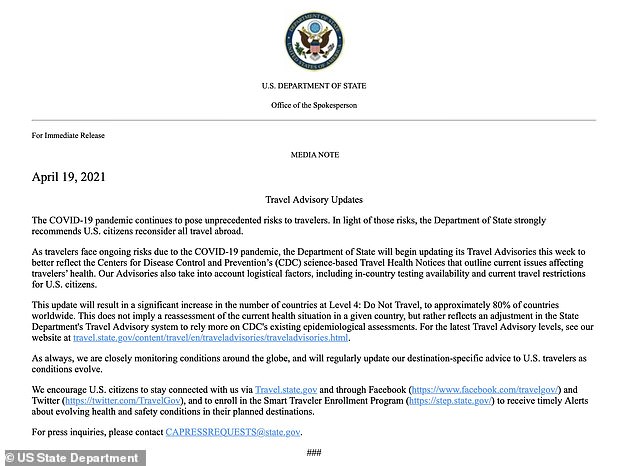 The U.S. Department of State announced on Monday it will be issuing ‘Level 4: Do Not Travel’ advisories for 80% of countries

Currently, there are 33 countries listed as Level 4.

It is unknown which countries will be added to the list, but it is believed it will include several nations in Asia, Central America and Europe.

On April 2, the Centers for Disease Control and Prevention (CDC) issued new guidelines stating that people who are fully vaccinated can travel safely within the U.S and internationally.

Travelers are considered fully vaccinated if it has been more than two weeks after their second dose of the Pfizer-BioNTech and Moderna vaccines ore after the one-shot Johnson & Johnson vaccine.

However, the agency still advised against non-essential travel due to spread of the virus and not enough people vaccinated yet to reach herd immunity.

‘Every time there’s a surge in travel, we have a surge of cases in this country,’ CDC director Dr Rochelle Walensky said last month.

‘We’re hopeful that our next set of guidance, will have more science around what vaccinated people can do, perhaps travel being among them.’