Vanessa Hudgens brought the heat to the premiere of her film Tick, Tick…Boom! in New York City on Monday evening.

The 32-year-old High School Musical alum modeled a plunging black gown that showed ample cleavage and a lot of leg for the event held at the Gerald Schoenfeld Theatre.

On her arm for the evening was her MLB boyfriend Cole Tucker and additional stars of the Lin-Manuel Miranda directed musical drama including lead Andrew Garfield, and Alexandra Shipp were present. 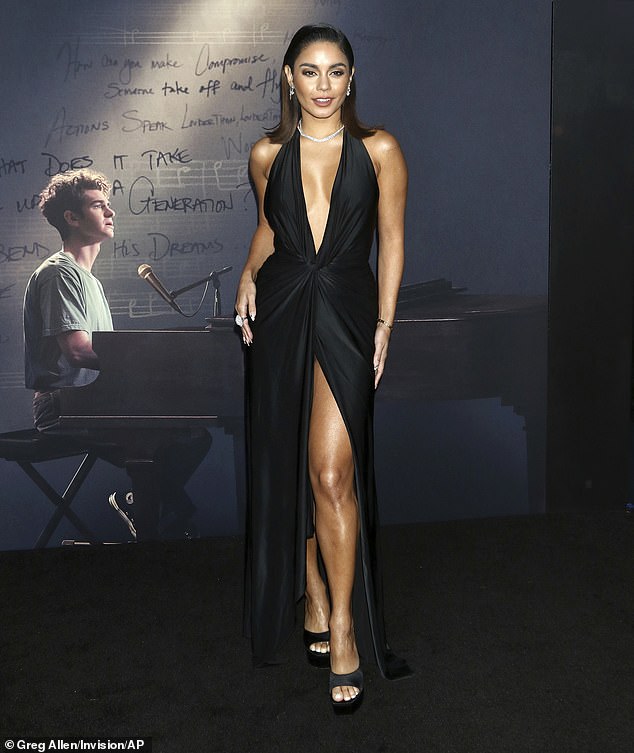 Dynamite: The 32-year-old former Disney star brought the heat in a plunging black gown as she attended the premiere of her latest film Tick, Tick…Boom!  at the Gerald Schoenfeld Theatre in New York City

Vanessa went with sexy glamour for the evening as she modeled a black halter dress with a plunging neckline that cascaded down to her midriff.

The skirt of the dress featured a pronounced slit in the front which showed off her toned legs and she elevated her petite frame with platform heels.

Her brain tresses were slicked back and worn straight and she accessorized with a diamond tennis necklace, glitzy drop earrings and a cocktail ring.

Not photographed beside her on the carpet was her boyfriend of a year, but the Pittsburgh Pirates player, 25, was snapped with her on the way to the event as they left the Ritz Carlton. 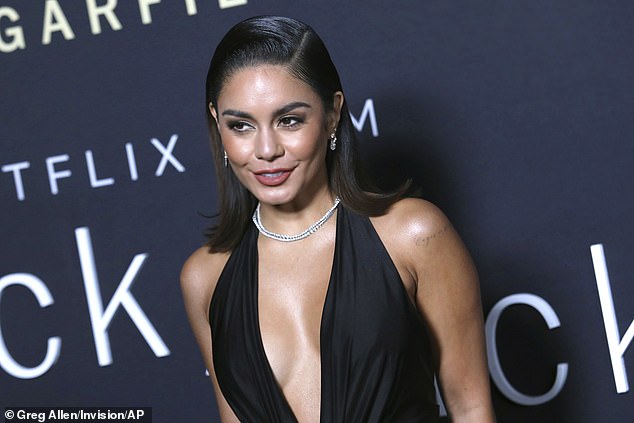 Busty: The Princess Switch actress drew attention to her decolletage and cleavage in the plunging black number 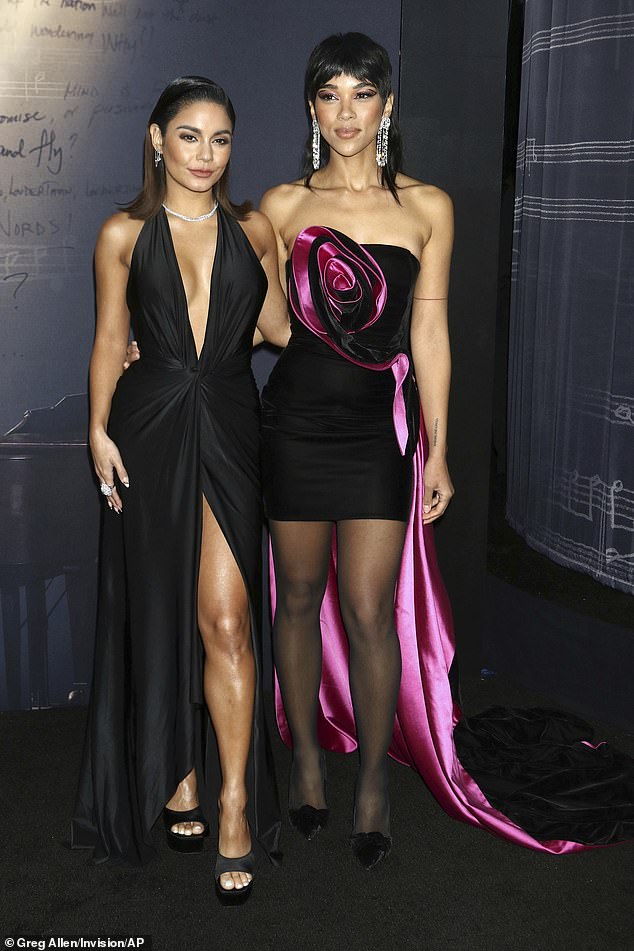 Photo op: Hudgens was seen posing for a photo with actress Alexandra Shipp 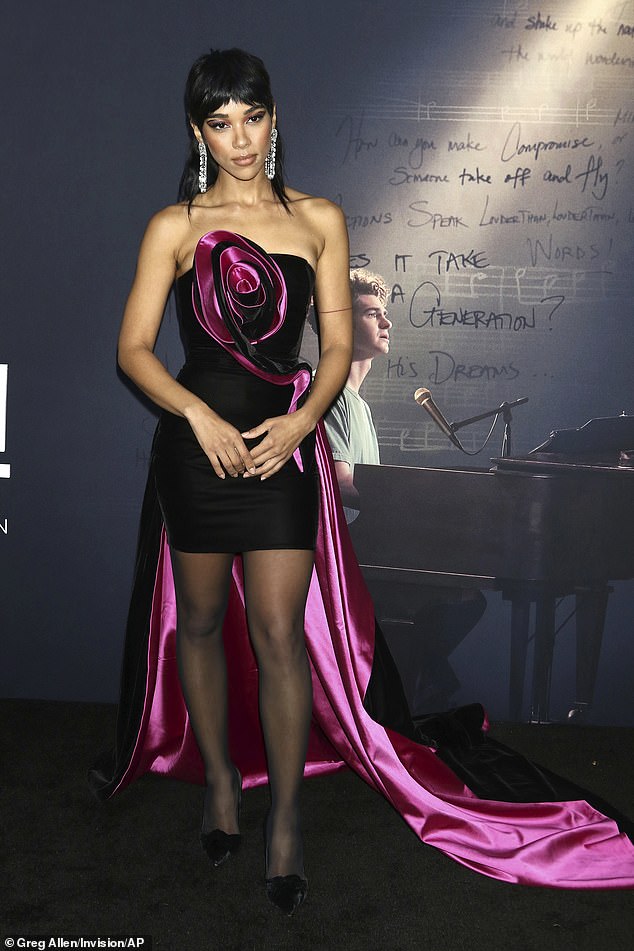 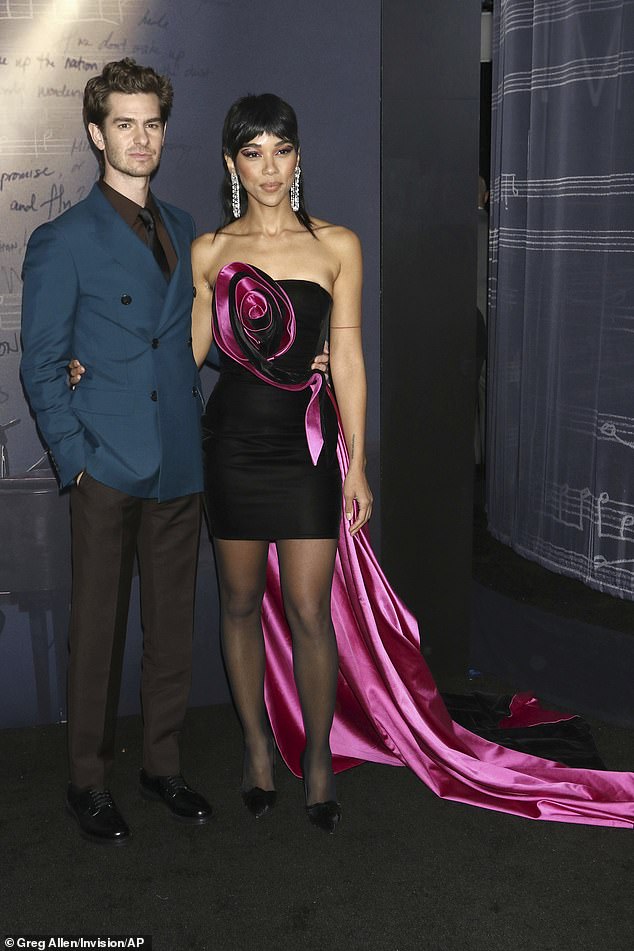 On-screen couple: In the movie Garfield, 38, stars as Jonathan Larson who penned a semi autobiographical play of the same name that the movie is based on

The film is based on a 1989 autobiographical play of the same name by Rent writer Jonathan Larson, who tragically passed the morning of Rent’s first preview performance in 1996.

Tick, Tick…Boom! tells the story of a composer in the midst of a quarter-life crisis sparked by his approaching 30th birthday, which causes him to grapple with his career choice and success while working on a musical, Superbia.

In the movie Garfield stars as Larson with Hudgens playing Karessa Johnson (an actress in the musical), and Shipp plays his girlfriend Susan (a dancer). 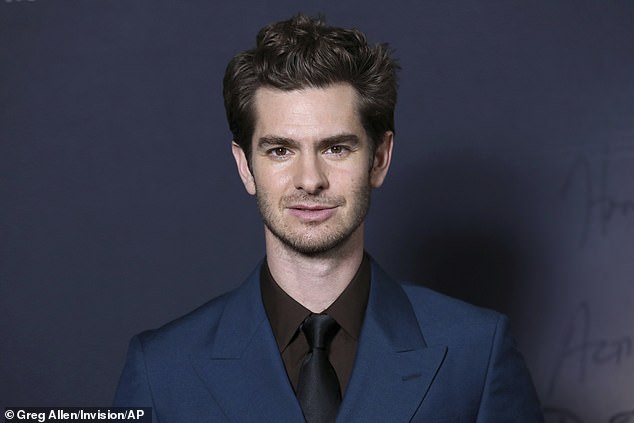 Leading man: Tick, Tick…Boom! tells the story of a composer (played by Garfield) in the midst of a quarter-life crisis sparked by his approaching 30th birthday, which causes him to grapple with his career choice 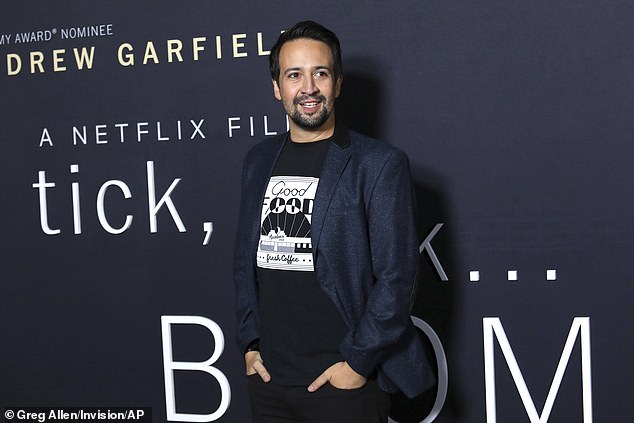 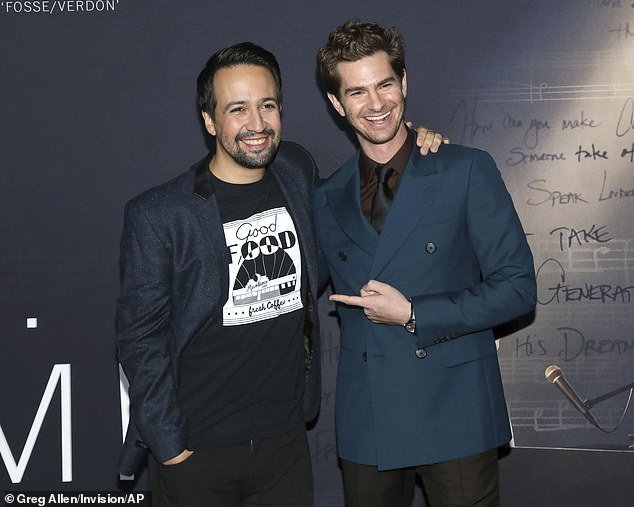 Best buds: Miranda was seen cozying up Garfield who looked stylish in a turquoise suit jacket 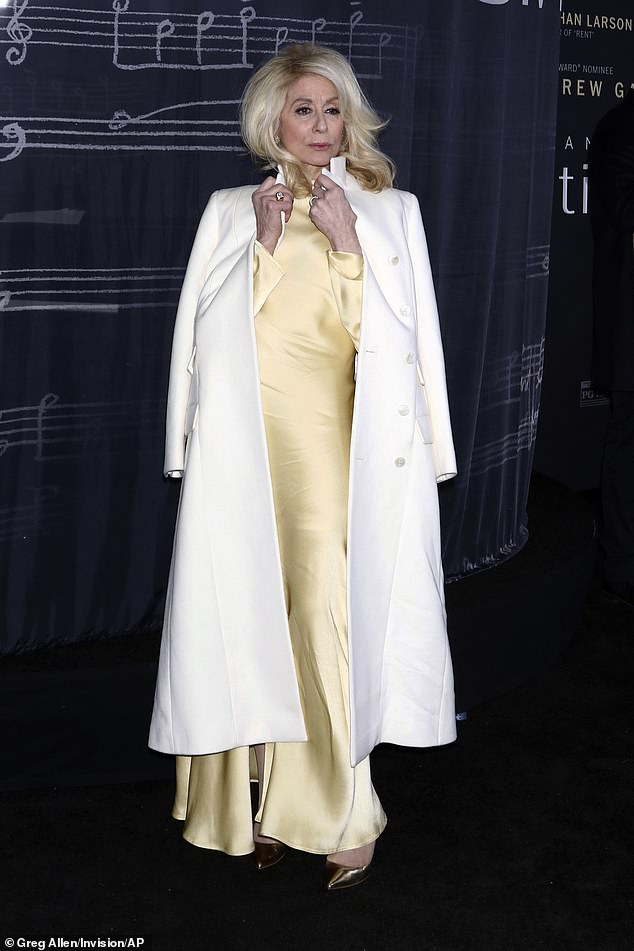 Statement look: Judith Light, 72, struck a dramatic pose at the premiere in a silky yellow dress and white coat with a high neck

The whole cast was in attendance at the premiere with Miranda bringing wife Vanessa Nadal and Garfield bringing his girlfriend of two years Christine Gabel, 27.

Both Hudgens and Miranda have personal ties to the late Larson who passed of an aortic aneurysm at the age of 35.

Vanessa starred in Rent: Live back in 2019 earning praise for her role as Maureen, and Miranda starred as Jon in a stage production of Tick, Tick…Boom!, back in 2014. 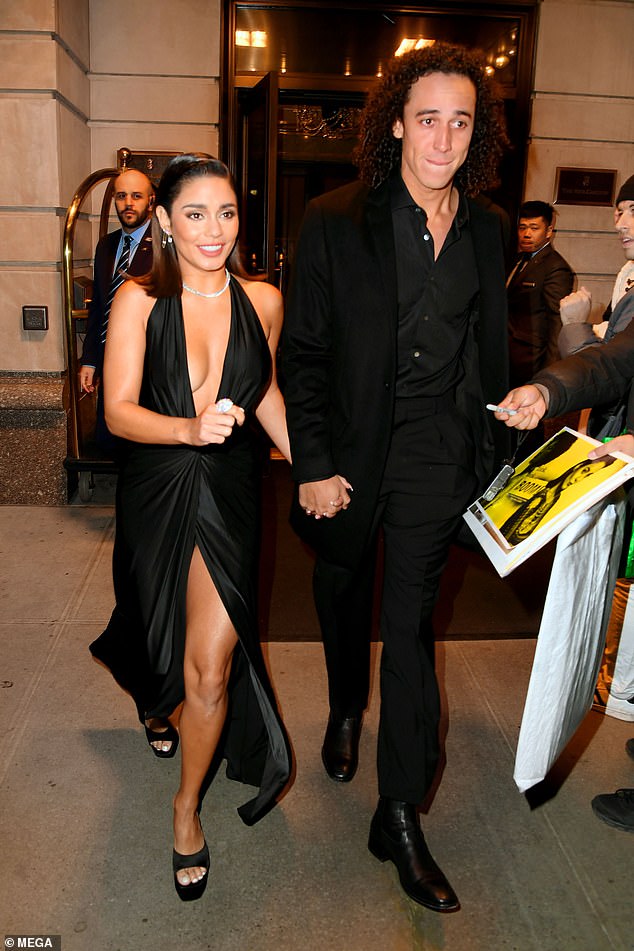 Lovebirds: Hudgens was seen with boyfriend Cole Tucker, 25, as they left the Ritz Carlton to head to the premiere 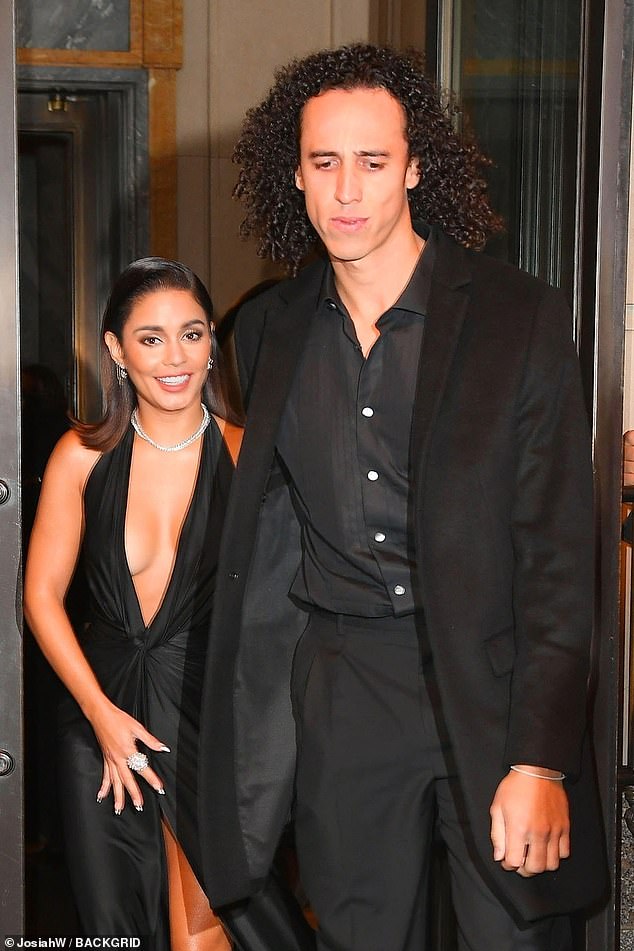 Going strong: She has been dating the Pittsburgh Pirates shortstop since November of 2020 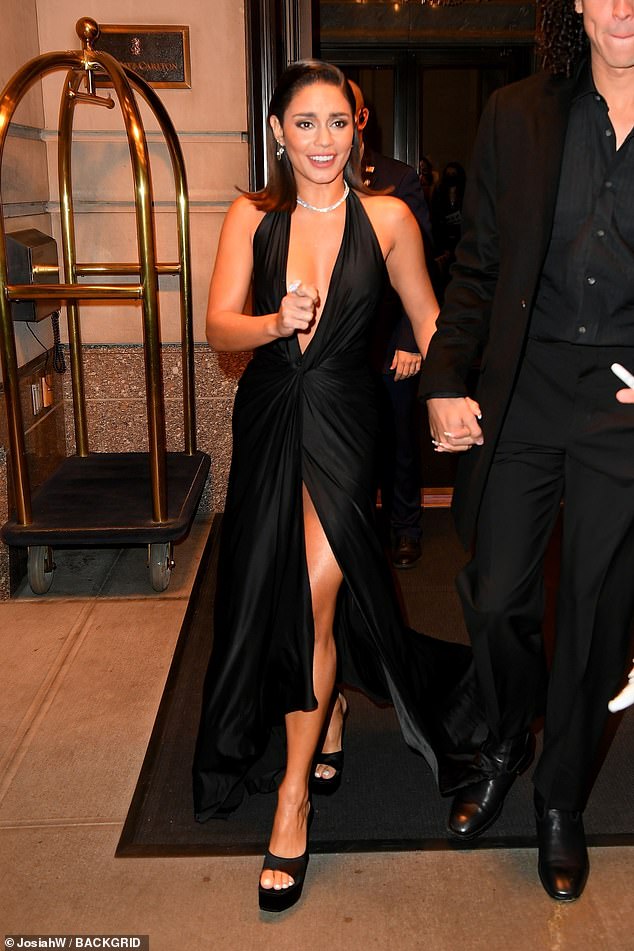 Supportive: The lovebirds were seen holding hands as they walked by a frenzy of fans waiting outside the hotel trying to get autographs

Hudgens was seen holding hands with Tucker ahead of the event as they walked by throngs of fans eagerly awaiting autographs and photos.

The duo were first romantically linked in November 2020 and only made their red carpet debut as a couple on November 10 at the AFI fest world premiere of Tick, Tick…Boom!

The film enjoyed a limited release on November 12 and is set to hit Netflix on Friday November 19. 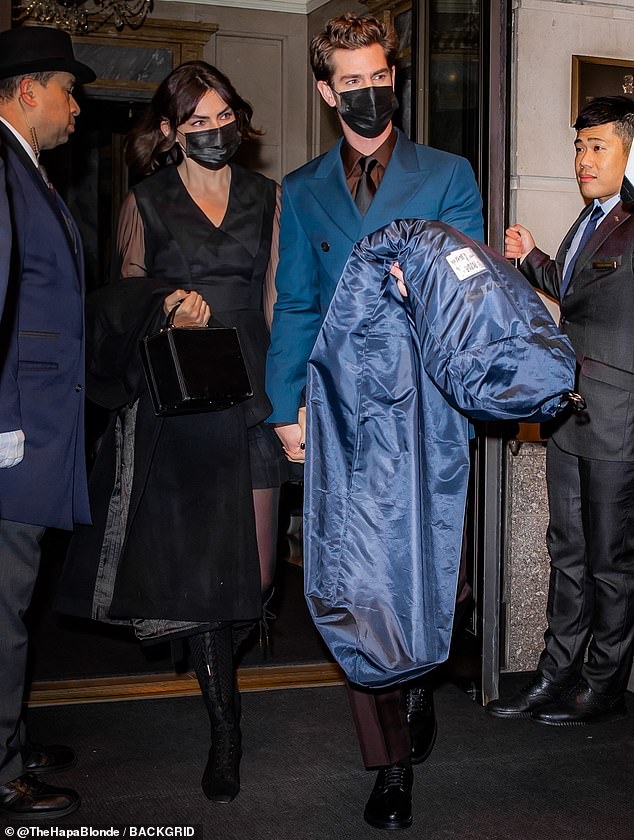 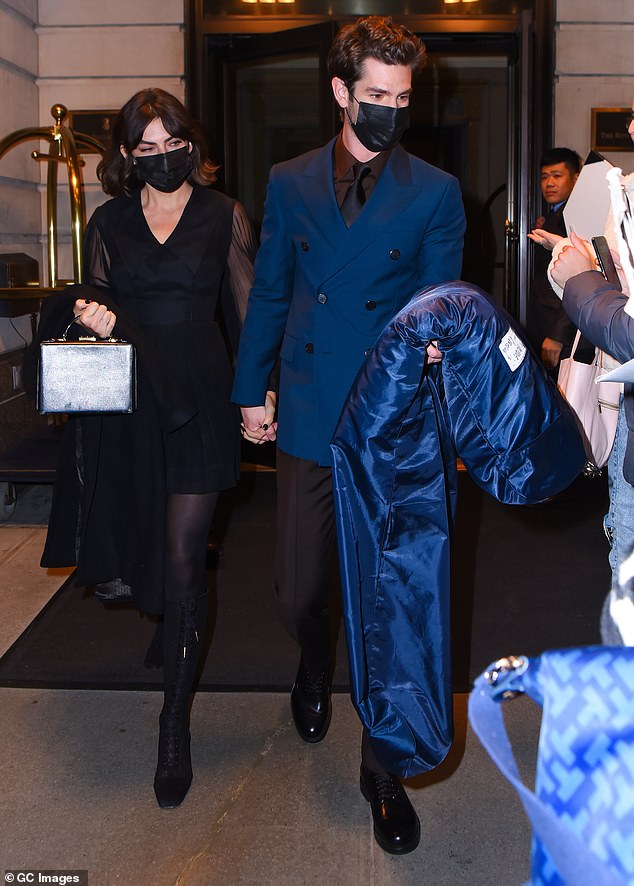 Still going strong: Garfield was first linked to the medical student/ model in 2019 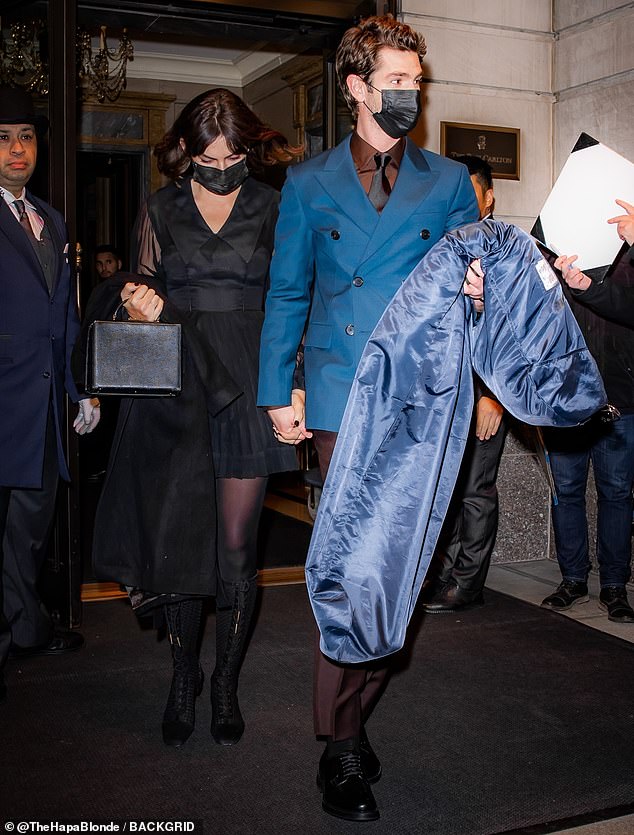 Lowkey: Though he tends to be private with his personal life his last known romance prior to Gabel was Emma Stone