‘Institutional racism is overused, UK is a beacon on diversity and many ethnic minority pupils out-perform white children in the classroom’: Your guide to the race report’s key findings

By Daniel Martin Policy Editor For The Daily Mail

UK NOT RIGGED AGAINST ETHNIC MINORITIES

Not all the disadvantages ethnic minority people face should be reviewed through the ‘prism’ of racism, the report concluded.

Issues such as family influence, geography and socio-economic background all impact life chances more than racism.

Commission chairman Tony Sewell wrote in the report that ‘impediments and disparities do exist, they are varied, and ironically very few of them are directly to do with racism’, adding: ‘The evidence shows that geography, family influence, socio-economic background, culture and religion have more significant impact on life chances than the existence of racism.

‘That said, we take the reality of racism seriously and we do not deny that it is a real force in the UK.’ 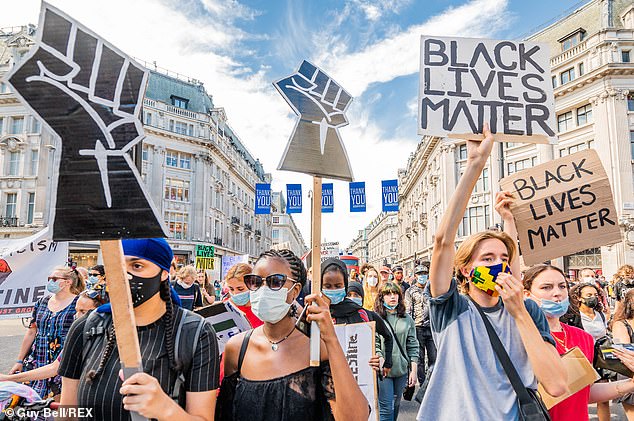 THE TERM INSTITUTIONAL RACISM IS OVERUSED

It found no conclusive evidence that the UK as a country is institutionally racist.

Dr Sewell said the phrase should not be over-used, adding: ‘We have argued for the use of the term ‘institutional racism’ to be applied only when deep-seated racism can be proven on a systemic level and not be used as a general catch-all phrase for any micro-aggression, witting or unwitting.’

THE IMPACT OF FAMILY BREAKDOWNS

WHILE racial background had a big impact on life chances, the report suggested family background was important, too.

For example, almost two thirds of black Caribbean children grow up in lone-parent homes. The report said: ‘In many areas of investigation, including educational failure and crime, we were led to family breakdown as one of the main reasons for poor outcomes. Family is also the foundation stone of success for many ethnic minorities.’

Unemployment is higher for many ethnic communities, but the pay gap has fallen.

The report said ethnic minority families were less likely to own their own home.

In 2019, employment rates for white British and Indian ethnic groups were 77 per cent and 76 per cent respectively, but it was just 69 per cent for black people. It was 56 per cent for people in the combined Pakistani and Bangladeshi ethnic group as a result of a low female participation.

Unemployment differences are down but remain far higher for younger people. The report said: ‘Employees from white Irish, Indian and Chinese ethnic groups on average have higher hourly earnings than the white British ethnic group.’

NO UNCONSCIOUS BIAS TRAINING OR ‘BAME’

THE term BAME (Black, Asian and Minority Ethnic) combines disparate groups that often have different outcomes. It also said: ‘The commissioners were not impressed by companies that pointed to ‘unconscious bias’ training as proof of progressive credentials. We were impressed by more conscious attempts to foster talent from a wide range of backgrounds.’

MORE LIKELY TO BE CRIME VICTIMS – OR ARRESTED

FOR every white murder victim aged 16 to 24 there were 24 black victims.

The report said class-B drug offences drove higher rates of criminality among some ethnic minorities, with eight times as many arrests of black men for drug offences than white men.

POLICE FORCES DO NOT REPRESENT THEIR AREAS

NO force is fully ethnically representative. But the report found ethnic minorities were put off joining in case friends or family accused them of ‘betraying’ their community.

THE disadvantages for poor white Britons must be faced, it said, adding: ‘The door may be half open to some, including the white working class.’