When the humourist Dorothy Parker was told that the dull and ineffectual President Calvin Coolidge had died, she exclaimed: ‘But how can they tell?’

Isn’t it the same with news that Ford is to stop making the Mondeo? Did anybody even realise that these cars were actually still in production?

To announce the end of something that barely exists is a pseudo-event. Modern life is one long sequence of them.

It would be melodramatic to write a headline saying ‘Ford stops making cars’. That is not quite true. Ford is ceasing to make cars like the Mondeo. Not that it was a bad car, but it had become an anachronism, like a pocket calculator or Calvin Klein underwear.

Besides, the social circumstances that created the ‘family saloon’ no longer exist: the conventional idea of a family is now too often a memory more than a reality.

It is the same with the ‘sports car’. Ideal for that top-down, full-throttle blast to the country pub for a few pints and blast home again! Perhaps not. 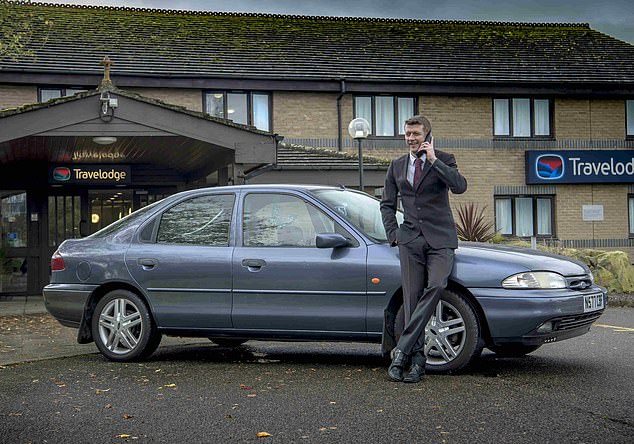 Ford is to stop making the Mondeo. Did anybody even realise that these cars were actually still in production? Pictured: Businessman stood beside a Ford Mondeo in a travelodge car park

‘Station wagon’? Who picks up guests and their bags from a train station? We have Uber for that.

If families want a car, they want a blob-sized SUV. Yes, a cumbersome four-wheel-drive is an absurd choice for many, but the only certainty in the black art of marketing is that consumers are irrational.

If rationality had anything to do with it, we would all be driving Citroen deux chevaux. Here is a car — designed to carry two peasants and 50kg of potatoes at 50km/h — that is cheap, endearing, enduring, comfortable and responsible. And you can’t say that of a Lamborghini Urus.

No, forget about horsepower and speed: cars have always been more about social competition and cultural modelling than dynamics. They are reference points for our notions of style, status and desire.

This is why, with an insight as bright as the New Labour dawn itself, Tony Blair, blinking at the brilliance of his coinage, gave us ‘Mondeo Man’.

Mondeo Man was New Labour on wheels. He was modern. He had front-wheel drive. He had left behind the baggage of resentment wearily carried by Old Labour class warriors. He had picked up in its place glittering packages of progress and optimism. 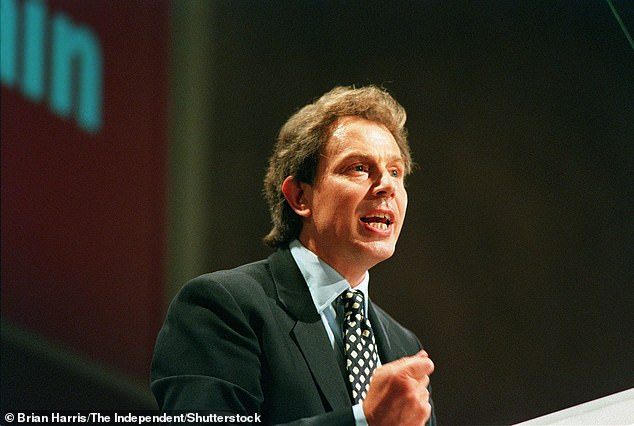 Tony Blair, blinking at the brilliance of his coinage, gave us ‘Mondeo Man’

He wore Gap chinos, owned his own house, had a statement BBQ and a mobile phone. And he was very likely self-employed.

Perhaps he went to a dental hygienist and a gym. Mondeo Man was to Keir Hardie and the earnest founders of Labour what John Major was to Lord Salisbury. Mondeo Man drank cocktails in Cancun, not brown ale in Brum.

Blair himself knew something of the power of cars to project values. At the time of the 1997 election, his personal car was an awful, unwashed Austin Montego Estate with, as I recall, a hub-cap missing. His image-conscious advisers knew this simply would not do for a victory parade of magnificence appropriate to his achievement.

A regal Jaguar was considered, but rejected as too Tory. Similarly, a Range-Rover was too country. Blair eventually arrived before the Downing Street cameras in a Ford Galaxy. A people-mover with seats that swivelled so you could face in any direction of travel.

Still, the death of the Mondeo is an elegiac moment. Karl Benz might have invented the car, but it was Henry Ford who realised its potential, who democratised it.

Ford, a restless tinker, said he was impelled to create the ‘gasoline buggy’ to escape the boredom of life on a Midwestern farm. And this vista of escape towards better circumstances was his legacy. When the New Yorker journalist E. B. White wrote about Henry’s Model-T, he said to drive it was to feel like a man enthroned. 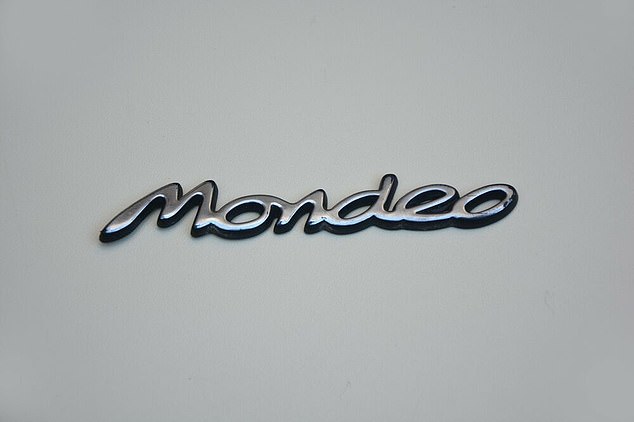 Ford’s decision to axe the Mondeo comes in the context of gigantic structural changes in the car industry. There is China. There is electrification

This democracy of dignified mobility has been a benefit and cost to mankind. Mondeo Man was, perhaps, the last to enjoy Ford’s gift of freedom to the full.

The Mondeo has roots deep in British culture. Its predecessor, the Cortina, appeared in 1962. Sold to a generation emerging from the plateau of rationing to explore the uplands of lifestyle, it brought a hint of Detroit vulgarity to Acacia Avenue as its residents prepared to buy The Beatles’ first LP.

Unlike the established family saloons of the day, the Austin Cambridge and Morris Oxford, the new Ford was not named after a university town, but after a whizzy Dolomites ski resort. It was aimed at the first package holidaymakers and the brochure featured passport stamps as a motif to demonstrate exotic potential that might be realised by ownership.

So much a part of national life, so much the embodiment of cul-de-sac chic, had The Dagenham Dustbin become that it featured in BBC documentary The Private Life Of The Ford Cortina.

Bank-robbers found its capacious boot a useful accessory to crime, a point made in the film. John Betjeman perfectly caught the car’s social position in his verse: ‘I am a young executive, no cuffs than mine are cleaner / I own a slimline briefcase and I use the firm’s Cortina.’

By 1982, a new set of symbols was required for the sharp-elbowed culture of Mrs Thatcher. This was the ambitious but unloved Sierra, with an aerodynamic profile that was meant to say ‘high-technology’ but was interpreted as ‘jelly mould’.

Ten years later came the Sierra’s successor, the Mondeo. It was a car directed at the whole world, not the provinces. For a while, as Blair observed, it was the absolute identification of machine with market. Nearly 20 years later, that market has vanished and Mondeo Man is extinct, or in hiding. 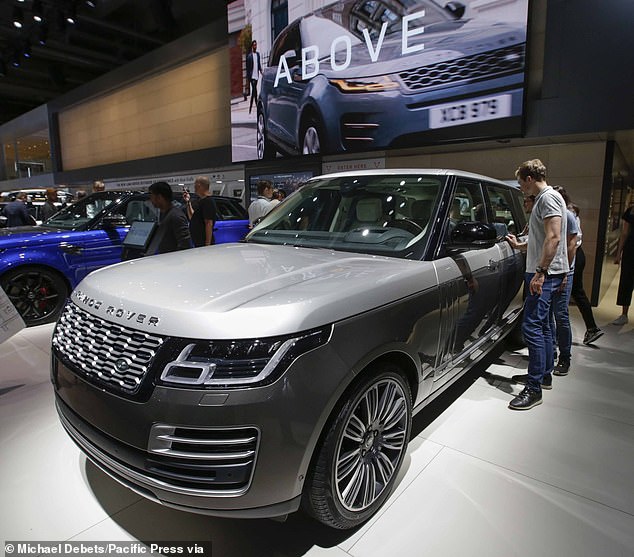 If families want a car, they want an SUV. Pictured: The British car manufacturer Land Rover displays the Range Rover

Ford’s decision to axe the Mondeo comes in the context of gigantic structural changes in the car industry. There is China. There is electrification.

The fact that while once young people saw ownership of a car as a route to freedom and self-expression — my own first car was a Cortina and I felt enthroned indeed — today a car is more of an expensive encumbrance that is going to lead to serial and inevitable encounters with authority, from vindictive traffic wardens to sinister surveillance cameras. In this turbulent world, mass-market Ford had a special problem: the rise of premium competitors.

Not one night ever in the last generation did anybody go to bed and dream ‘one day I will have a Mondeo’. Ford never possessed even a small sampler jar of that fairy dust. It is many years since the ‘prestige’ BMW 3-series began to outsell the ‘democratic’ successor to The Dagenham Dustbin.

Ford’s strength, its power, has forever been associated with the ordinary. The blue oval car is for the blue-collar man, even if he has left his work overalls behind.

But what of Mondeo Man himself? A proud and newly independent type, confident and unafraid to express himself through his choice of car . . . or cocktail or trousers. But now he has disappeared.

Mrs Thatcher said there was no such thing as society. Perhaps there never was such a thing as Mondeo Man. Perhaps he was as much a fiction as New Labour.

True, we still express our desires through the products we choose, but cars are fast losing that power of expression. Mobility is a chore, not an adventure.

If there is an evolution of Mondeo Man, it must surely be Tesla Man. Not a man enthroned, but one encumbered by environmental guilt and existential fear. With the passing of the Mondeo and its keeper, something touching and simple has been lost.