A woman has voiced her upset after her accountant boyfriend sent her an itemized ‘invoice’ for a romantic weekend away – complete with a spreadsheet breaking down ‘every cost’ of the trip ‘down to the cent’.

The unnamed woman took to Reddit to share her relationship woes, asking other users for advice on how to handle the situation, while admitting that she was less-than-impressed by her partner’s actions, explaining that she felt more like his ‘client’ than his girlfriend.

In her post, she explained that both she and her boyfriend have ‘professional jobs on decent salaries’, and that ‘money is not tight’ for either of them, adding that she has always ‘insisted on going halves on any dates’ to make clear that she doesn’t expect him to foot the bill when they go out. 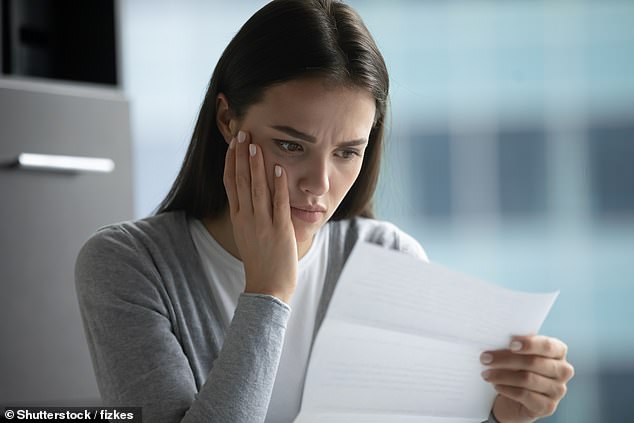 Oh dear: A woman has shared her upset after her boyfriend sent her an ‘invoice’ for their first romantic weekend away together – breaking down every cost ‘by the cent’ (stock image)

But despite this, when it came to planning their ‘first weekend away together’, she said his behavior became somewhat ‘weird’ and ‘unreasonable’, revealing that he was initially ‘hesitant’ to even book the trip over fears that they might ‘break up before’ they were due to go away.

‘We’ve been dating for a few months, exclusively together for 3 weeks and this is our first weekend away together,’ the woman wrote. ‘We’re just going to a nearby town (1 hour travel time), staying in an Airbnb and visiting one tourist attraction. Not an extravagant trip by any means.

‘Although it seems he is excited to go, he was a bit hesitant at first and nervously asked, “But what if we break up before the trip?”

‘I found this to be a huge mood killer given we are in the honeymoon phase of our relationship, but I told him that as the trip is only overnight, and relatively inexpensive (less than $200) it wouldn’t really matter if we just cancelled if it came to it – or I could take a friend.’

When she tried to propose that they book a dinner at a restaurant, he was also incredibly reluctant, telling her that the eatery she had chosen looked ‘very nice’ but was also ‘super expensive’, and suggested that they just get ‘takeaways instead’.

Even after these bumps in the road, the woman was still excited about her romantic getaway – until her boyfriend sent over an itemized invoice for the trip, breaking down every cost ‘to the cent’ in a move that she described as ‘weird’ and ‘unreasonable’.

‘He sent me a message explaining how he’d “broken down the cost of the weekend” so he could book the Airbnb, transport tickets and tickets to the tourist attraction,’ she said.

‘He’d attached a spreadsheet with our names in it, literally breaking down the cost of everything to the cent, with the final add up of everything telling me I owed him $167.99.’

The Redditor insisted that her upset about the invoice had nothing to do with anger over being expected to pay her way, explaining that she was simply frustrated at how her boyfriend approached the financial breakdown.

‘I’m not tight with money at all, and would happily have just given him $200 to cover my share of the weekend (or booked some things each and let it all balance out) without the need to quibble over minor costs like this,’ she explained.

‘He’s an accountant so I get that he kinda does spreadsheets for a living, but this has ruined the vibe of the weekend for me.

‘I’m his new girlfriend going on a romantic weekend away, not a client to send an invoice outlining every cent. It feels so procedural.’

She then asked other Reddit users: ‘Am I right to feel this is weird/unreasonable?’

Many people agreed with her reaction, with some pointing out that it may well be a warning sign that the pair is ‘incompatible’.

‘It sounds like you may just have different views of money,’ one person wrote. ‘It’s not a red flag but it is a potential incompatibility.’

Another chimed in: ‘I think I would talk to him about this but you’re not wrong for being turned off by this… I think the red flags for him being kind of a cheapskate is asking “what if we break up before” (implying the loss of money will be more important than the loss of relationship?) and then talking you out of a nice restaurant.’