A woman turned into a sleuth by using Facebook to track down the rightful owner of a missing dog found 40 miles away after she became suspicious of her neighbour.

Anna Taylor, 57, said she turned to social media to see if anyone reported a missing Shih Tzu when she got a weird hunch about a her neighbour’s ‘new’ dog in Westgate-on-Sea, Kent.

Lili, a five-year-old Shih Tzu, vanished from the street where she lived with owners Arek and Kasia Talarek, both 43, and their children Monika, 10, and Mikolaj, 15.

Mr Talarek said the dog went missing in mid-March, bounding off down the street as he and his wife unloaded their car at their home in Gillingham. 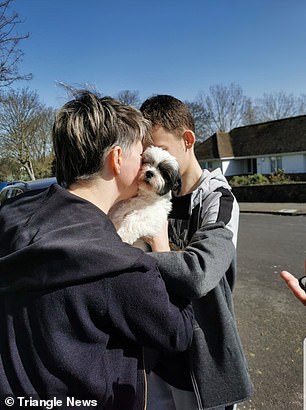 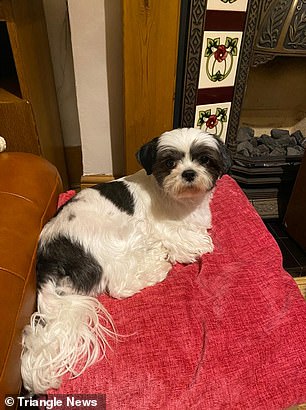 Anna Taylor, 57, said she turned to social media to see if anyone reported a missing Shih Tzu when she got a weird hunch about a her neighbour’s ‘new’ dog in Westgate-on-Sea, Kent. Pictured: Lili the Shih Tzu being reunited with her real family

He said: ‘It has happened before, and all of my neighbours know my dogs so to be honest I really didn’t worry too much when she ran off.

‘But after two minutes of looking I started running and thinking, ”Where is Lili?”

He eventually spoke to a neighbour who said they had seen two men pick Lili up.

‘My daughter Monika was really sad, every day she cried,’ he said.

‘The dog is actually my wife’s dog, she was so sad. Lili had been with us for five years since I bought her for my wife for her birthday,’ he explained.

He added: ‘Lili is a member of the family.’ 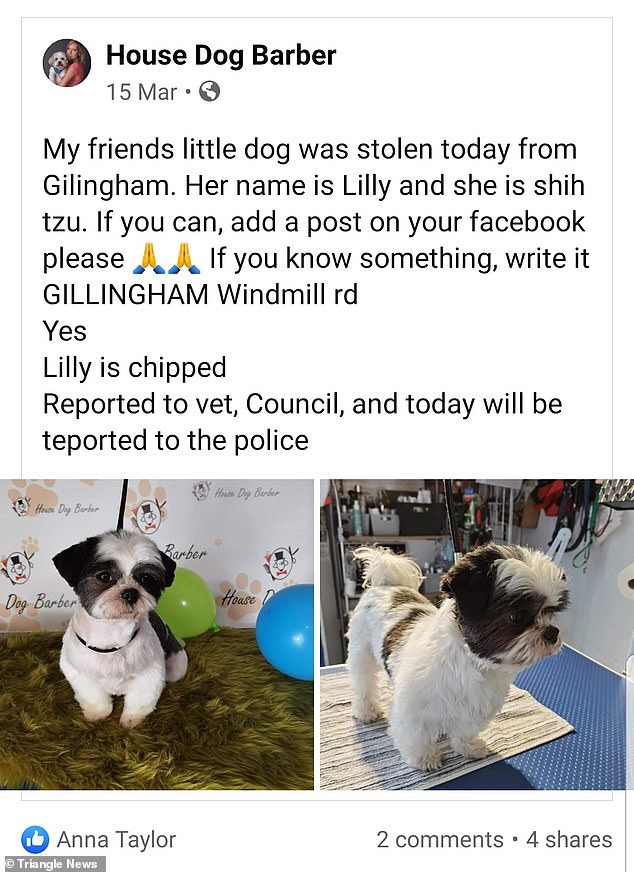 After hours of searching, Ms Taylor found a post matching the description of the little Shih Tzu from a dog groomer, she phoned the business who then put her in touch with Mr Talarek

But she instantly became suspicious when the story behind how she bought the dog didn’t add up.

Mother-of-four Ms Taylor said the woman didn’t introduce them to the new pooch.

She also claimed her dog was a puppy, but after checking Lili’s teeth Ms Taylor realised she was about five-years-old.

She then did some Facebook sleuthing, spending hours looking over lost dog posts on social media.

She explained: ‘That night it bugged me and bugged me, so I looked on Facebook and went through all the different lost dog sites.’

After hours of searching, Ms Taylor found a post matching the description of the little Shih Tzu from a dog groomer, she phoned the business who then put her in touch with Mr Talarek. 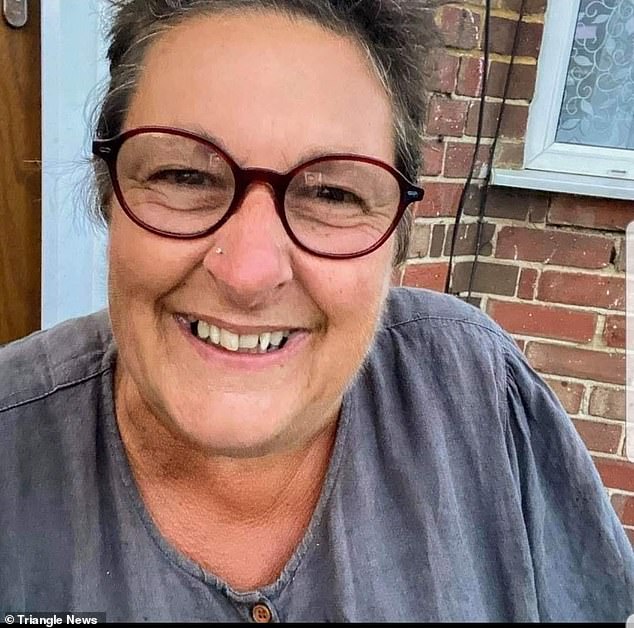 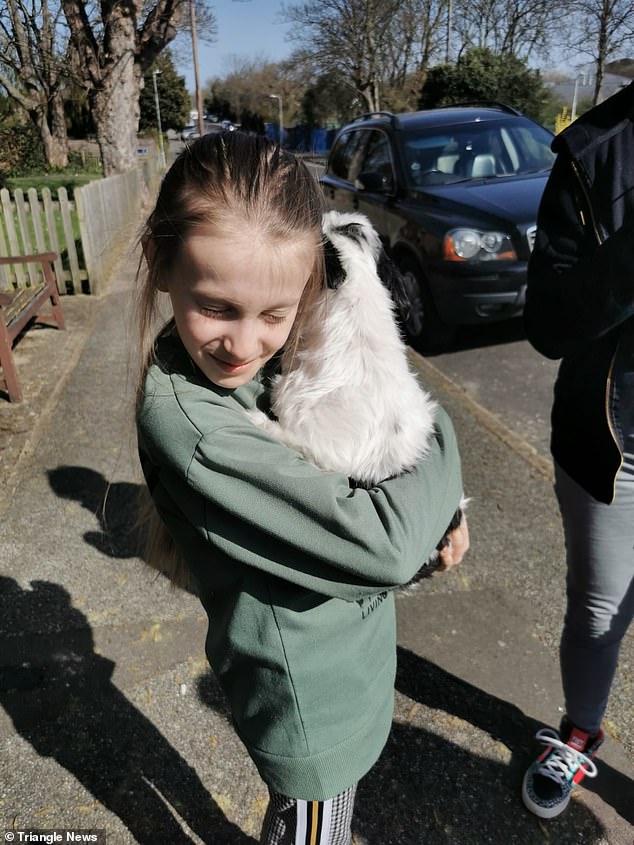 Pictured: Lili being reunited with her owners in an emotional video

Ms Taylor said: ‘I gave the police all this information, but they weren’t being very helpful.

She messaged Laura Sullivan who spends her free time working to rescue and rehome vulnerable and lost animals, as well as another animal-loving pal, named Chelle Foreman.

‘They were both on it straight away. I texted Arek and told him – the police really were doing nothing,’ she said.

Laura and Chelle were able to speak to the new owner who let them scan the pup’s microchip – a must for all pets as it allows true owners to be identified in missing and stolen dog cases.

The scan showed that she had been reported stolen by her real owner. But the new owner refused to hand the dog over unless Arek came to collect her himself in a few day’s time. 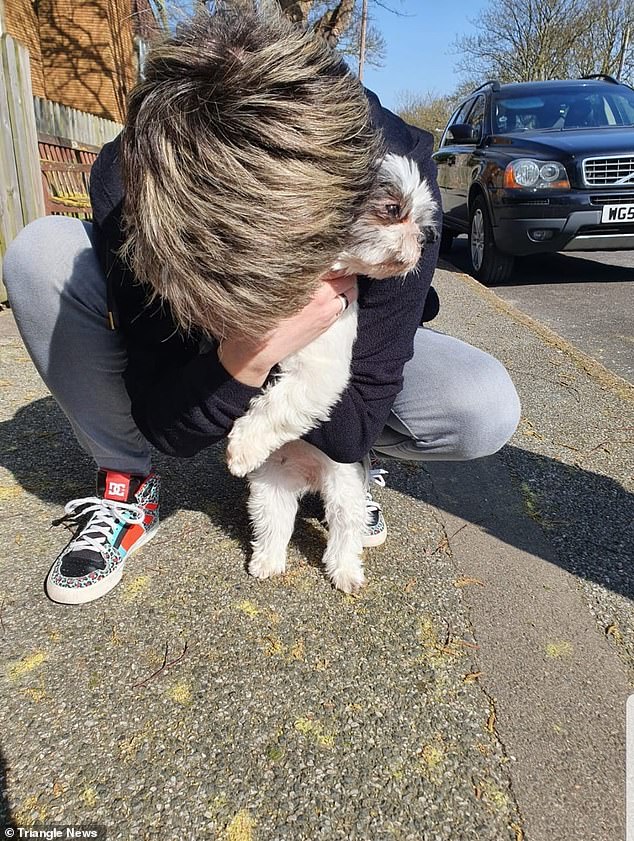 In a moving video, Kasia can be seen fighting tears as she is reunited with the dog – who is visibly overjoyed to be back with her mum

Around 20 minutes later he, his wife and their children had arrived and the family was reunited, with footage showing the moment little Lili was able to jump back into her owner’s arms.

In a moving video, Kasia can be seen fighting tears as she is reunited with the dog – who is visibly overjoyed to be back with her mum.

Anna said she and Arek both followed up with police after the dog was found, as both suspected there was something far darker going on than a simple case of a missing dog.

Arek said: ‘The police really did nothing, when Anna showed me a photo of the dog I was 100 per cent sure that it was Lili.

‘But the police said they couldn’t be sure.

‘They told me if I went to collect her myself they would arrest me. I was fuming.

‘I can’t tell you how happy my wife was when she was reunited with the dog.’

Anna said: ‘The police were useless. It’s all red tape and stupidness.’

A spokesperson for Kent Police said: ‘Kent Police received a report that a dog had been stolen in Gillingham, between 4 and 4.30pm on Tuesday 16 March 2021.

‘Officers reviewed all available lines of enquiry and on Sunday 4 April, following the receipt of further information, a dog warden collected the dog from an address in Westgate-on-Sea.

‘It was then reunited with its family on the same day.’