By Chris Jewers For Mailonline

Women serving in Switzerland’s military will no longer have to wear men’s underwear under a pilot project starting next month.

Currently, all service members in the Swiss army are provided with the same standard issue military clothing, which means men’s underwear for everyone, regardless of their gender.

But under the new project beginning in April, female soldiers will be allowed to wear women’s underwear instead.

Defense Minister Viola Amherd, who has advocated boosting the presence of women among Switzerland’s ranks, has welcomed the change.

‘The clothing is designed for men, but if the army is really to become more feminine, appropriate measures are needed,’ she said, announcing the test phase in April.

According to Armasuisse (The Swiss Federal Office for Defence Procurement) spokesman Kaj-Gunnar Sievert, ‘the two specific functional underwear for women – short underwear (summer) and long underwear (winter) – will be tested in April.’ 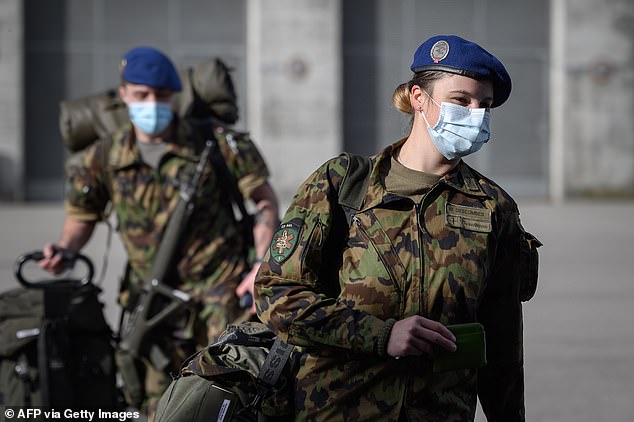 Women serving in Switzerland’s military will no longer have to wear men’s underwear under a pilot project starting next month. Pictured: Swiss army reservists wearing protective face masks arrive at Moudon military base on November 8, 2020

The standard-issue underwear – which according to Sievert has been in use since the 1980s – may only be one of a number of factors dissuading women from joining the Swiss army, which lags behind other European nations.

Just one percent of the military in Switzerland is made up of women, according to The Local. By comparison, Sweden’s military is 18 percent women, France’s is 15 percent, and 12 percent in Germany and Norway.

Switzerland hopes to increase the number to 10 percent by 2030.

‘The old generation of uniforms was not geared enough to the specific needs of women,’ said Sievert. ‘Against this background, the procurement of the latest equipment is just as important for women as it is for men.’

Sievert also noted that it was important for the test to include women of a variety of heights and shapes, ‘otherwise none of this makes any sense.’

Major Tamara Moser, project manager of the ‘Army and Women Inclusion’ programme and the first woman on the board of the Swiss Officers’ Society, has been critical of the Swiss army’s lack of gender diversity.

‘Since 2004, the army has not taken the necessary steps to structurally and culturally include women in the army,’ she said to Swiss news outlet Watson.

Women have been permitted to join the Swiss army since 2004, performing exactly the same duties as men but under conditions involving uncomfortable underwear, as well as accommodation deemed unsuitable for women, according to a federal report looking at women in Switzerland’s military.

Marianne Binder, a member of the Swiss Central National Council, acknowledged that there was still more to be done, but that the change of underwear was a step in the right direction.

‘In view of the many positive responses to this advance, I realised how many people wear uniforms from morning to night, not just in the army; and everyone says it’s a question of appreciation,’ she said.