‘Hacksaw’ Jim Duggan endured another surgery on Friday; only this time it comes one day after he revealed that he was diagnosed with prostate cancer.

The former WWE star, 67, laid out some of the details of the diagnosis and operation in an Instagram video that he shot alongside his wife of 32-years, Debra Duggan.

And then the following day, on Friday, Debra took back to the social media platform to thank everyone for the thoughts and prayers, and share that ‘Jim’s surgery went as planned.’ 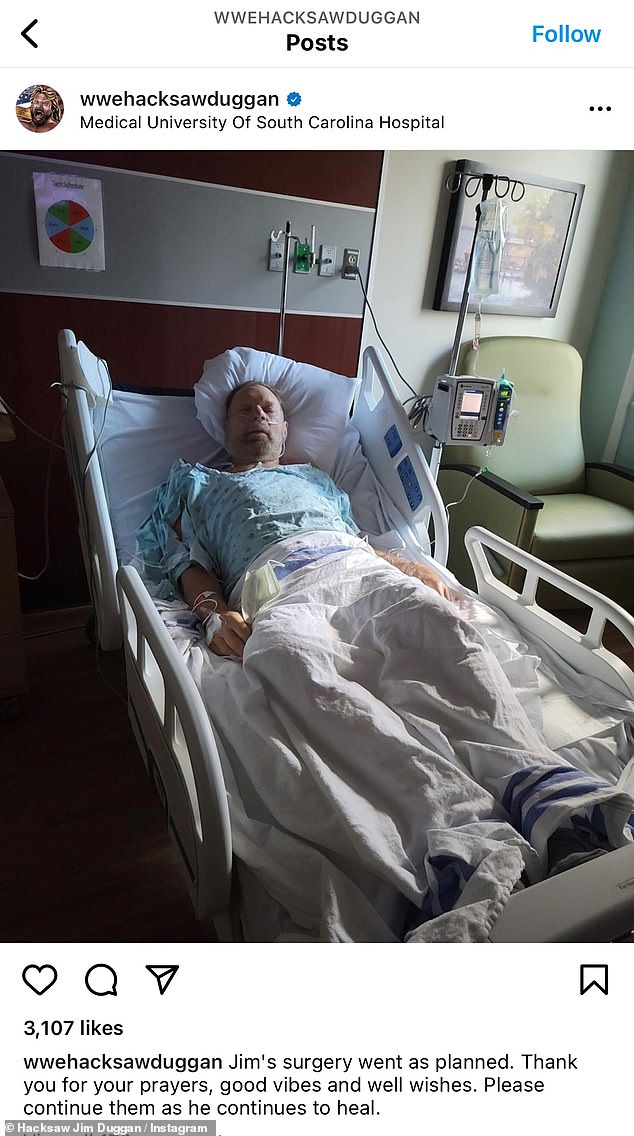 On the mend: The wife of ‘Hacksaw’ Jim Duggan revealed the former WWE star’s surgery for prostate cancer ‘went as planned’; she also thanked fans for their ‘good vibes’

‘Hi folks. Deborah and I always share the good times, but today we’ve got to share some bad times,’ the South Carolina resident began in the video, with his wife standing just behind him for support.

‘I’ve been diagnosed with prostate cancer and I’m having my surgery tomorrow [Friday],’ he continued, before sharing that he and Debra ‘have been living with it and getting ready.’

He added, ‘But the reality is here. I’m going to Charleston tomorrow [Friday] for my cancer surgery. So folks I know you’ve been thinking and praying for me with this last surgery, but please think of me this Friday as I go into my cancer surgery down in Charleston.’

In conclusion, Duggan said Debra would keep fans and followers updated, as he is ‘going to take a little break from social media.’

‘So thanks for all the thoughts and prayers and we’ll see you down the road with the grace of God and the skills of the doctors. Love ya.’ 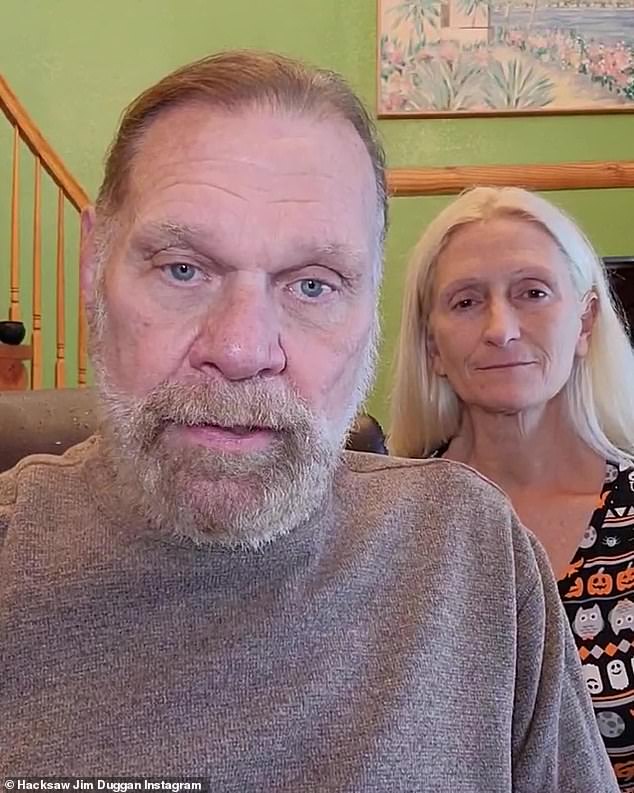 Coming clean: The former WWE and WWF star announced his prostate diagnosis in a video he shot alongside his wife of 32 years, Debra Dugga, that was posted on Thursday

After the surgery, just before noon on Friday, Duggar’s wife returned to Instagram and shared an update on his condition, along with a photo of the former professional wrestling legend recovering in his hospital bed.

‘Jim’s surgery went as planned. He is resting comfortably now,’ the post began.

‘Thank you for your prayers, good vibes and well wishes. Please continue them as he continues to heal.’

The operation comes about two weeks after the WWE Hall of Fame wrestler underwent emergency surgery, which to date still hasn’t been linked to his cancer diagnosis.

Following that surgery, Debra posted another photo of her husband lying in a hospital bed giving the camera a thumbs up, and again thanked his supporters ‘for your prayers, good vibes and good thoughts.’

Hulk Hogan was among the many friends and former colleagues to share their well-wishes, writing, ‘Love you my brother, praying for only perfect health.’ 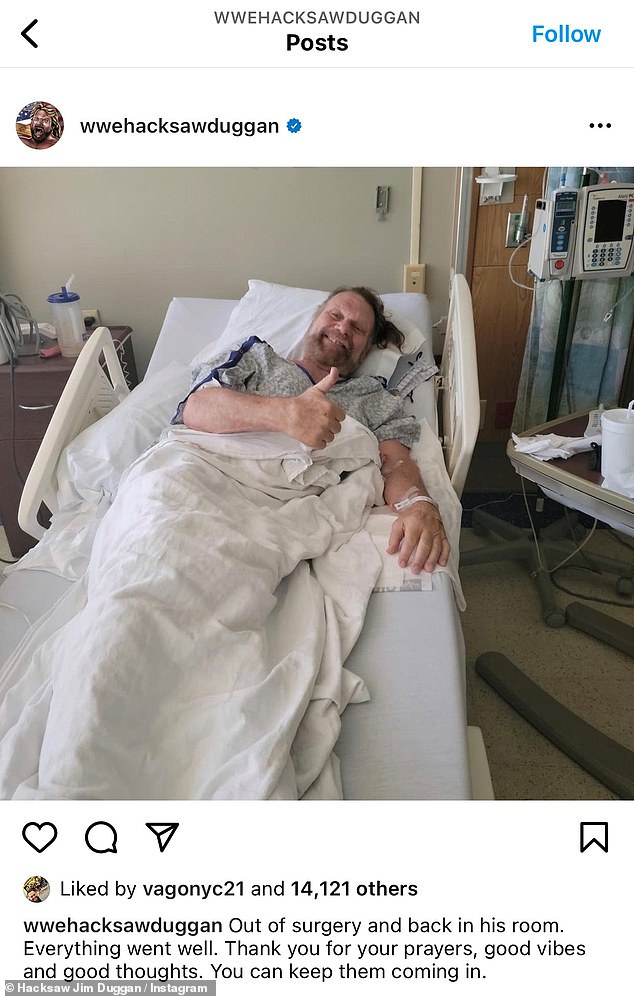 More health concerns: The prostate cancer operation comes about two weeks after the WWE Hall of Fame wrestler underwent emergency surgery, but it’s still unclear if the illness was related to the cancer diagnosis 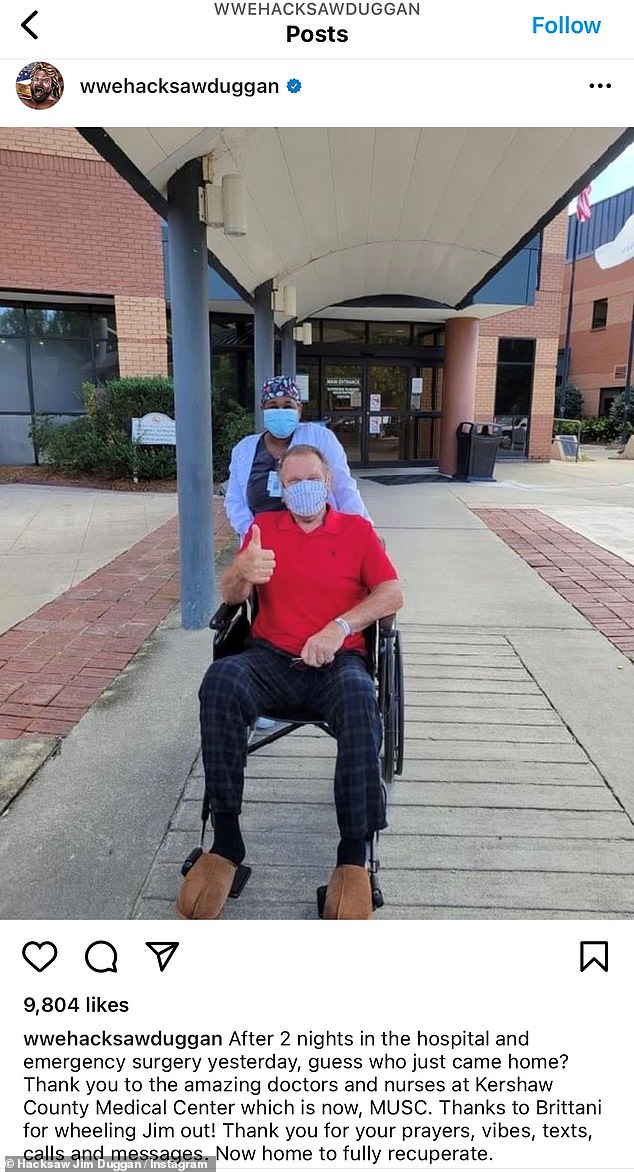 All god and going home; Duggan gave a thumbs up and than doctors and nurses afer undergoing surgery at MUSC in South Carolina in October

Duggan’s health problems also date back to 2018, when he spent time in the ICU suffering from heart issues. He recovered from that a short time later and again thanked doctors and supporters.

It was 1979 when Duggan performed his first professional wrestling match, but after catching the attention of Vince McMahon he would eventually make the move to the World Wrestling Federation (WWF), and have his first major appearance for the company at WrestleMania III in 1987.

The New York State native won the first-ever Royal Rumble in 1988 and stayed with the WWE until he moved to World Championship Wrestling in 1993. While there, he won both the WCW television title and United States title.

Duggan would seal his legacy in professional wrestling when he was inducted into the WWE Hall of Fame in 2011.

He returned to wrestling in WWE with an appearance at the 2012 Royal Rumble but he was eliminated by Cody Rhodes, 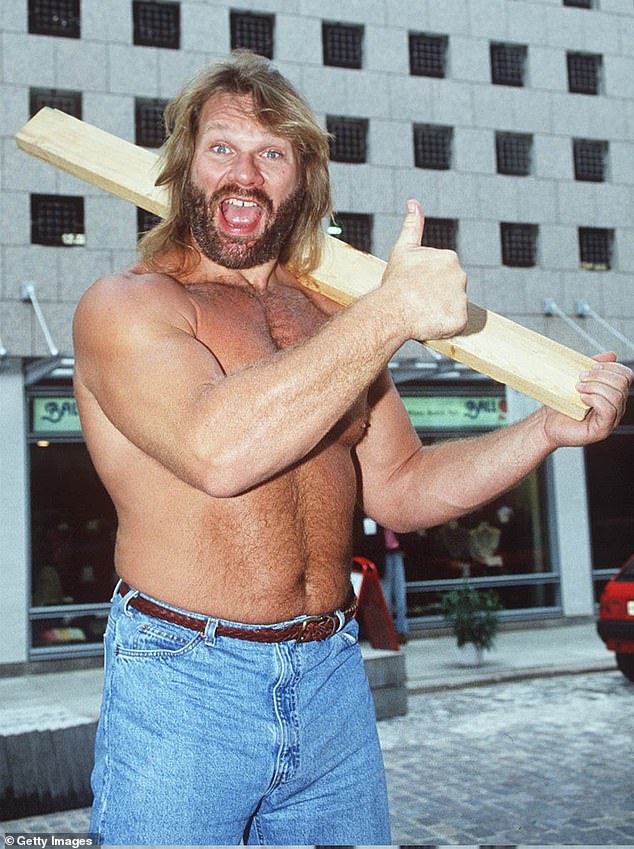 Making his lark: After beginning as a pro wrestler in 1979, Duggan had his first major appearance with WWF at WrestleMania III in 1987; he’s pictured in 1994