Another day, another revelation that the world is a fundamentally sexist and misogynistic place. Researchers in Australia have discovered that women who daub themselves in lots of make-up are more likely to be objectified by men and looked down upon by women.

To reach their damning conclusions, Australian psychologists lined up 844 people, asking them to rate photographs of women in terms of the subjects’ brain power and likelihood to engage in casual sex. Their findings, published in the European Journal of Social Psychology, suggest that the painted will be pariahs, deemed to be of lower moral status (translation: up for it) and significantly less bright.

Last time I looked, enjoying sex wasn’t a bad thing so let’s park that right here. However, no one wants to be seen as dim — even by 844 individuals of clearly limited wits. 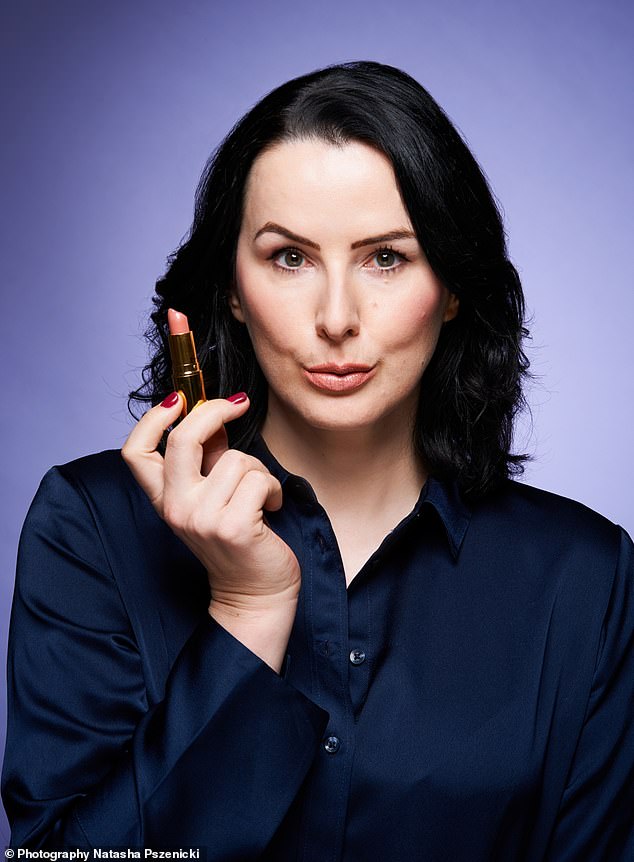 Hannah Betts (pictured) recalls the prejudice she’s experienced for being ‘too glamorous’, as researchers reveal women who daub themselves in lots of make-up are more likely to be objectified by men and looked down upon by women

So much for those of us who live for a fuchsia pout or emerald eyelid, who crave highlighted cheekbones, or cornflower-coloured nails. To be deemed clever, one must eschew Technicolor techniques for puritan scrubbed cheeks and a nun-like appearance just short of the wimple.

Tell me something I don’t know. As a 50-year-old who has taken enormous pleasure in sporting a full face of slap every day since the age of 11, I can confirm that this prejudice is alive and kicking. Throughout my life, I have been informed that I couldn’t be an academic, a leader writer and/or a feminist because I was ‘too glamorous’; read: caked in cosmetics.

I remember a piously bare-faced science teacher gazing with scorn at my 1980s eyeliner and gloopily glossed lips. My cosmetic fixation meant I must be extremely stupid, she declared, and I would never earn any money.

In fact, my interest in the cosmetic arts has introduced me to cultures past and present from Bronze Age beauties onwards. While the most I have ever been paid was actually to name nail varnish shades for a designer brand: several thousand a day to come up with Crimson Claw and the like.

The prejudice against painted ladies is not something that ends with adolescence. Far from it. Society is never happier than when it’s telling women how they should look, categorising them according to a stereotype that claims blue stockings are incompatible with blue eyeliner.

In my 20s, I taught English for six years as a lecturer at Oxford, while researching descriptions of female beauty within Elizabethan literature.

In my early 30s, I wrote a make-up column for a newspaper, while also being part of its editorial and comment department of ‘serious’ writers. I took over the cosmetics gig from the famously bookish Nigella Lawson, gifted by anybody’s standards, who also happens to share my fascination with powder and paint. 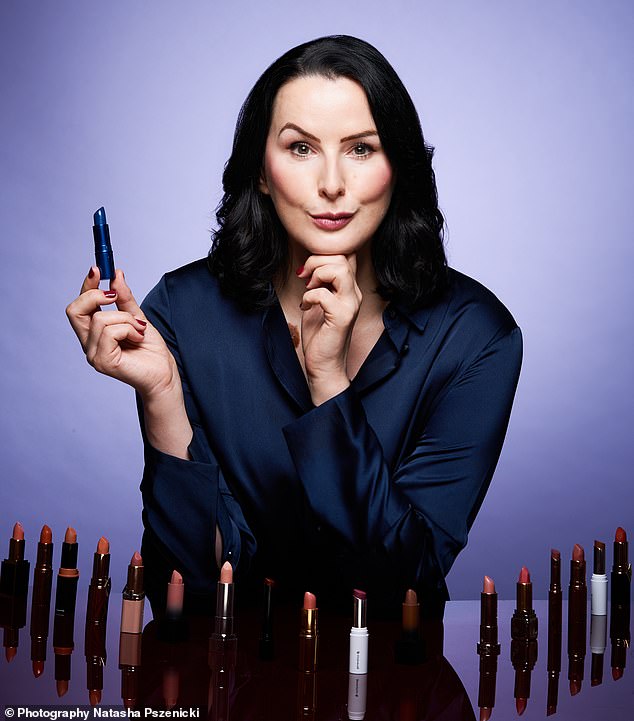 The far-sighted and generous male editor who appointed me said that he knew smart women could love make-up because he was friends with Susan Greenfield, then director of the Royal Institution, and as notorious for her scarlet lips and long blonde hair as she was for her planet-sized brain.

Professor Greenfield, whom I had had the pleasure of knowing at Oxford, has held research fellowships in its Department of Physiology, the College de France in Paris and in NYU Medical Center New York.

She has been awarded 32 honorary degrees from universities around the globe.

She is currently CEO of a biotech company developing a disruptive approach to Alzheimer’s disease based on her research exploring mechanisms linked to neurodegeneration.

Originally a classicist before becoming a brain specialist, now a writer, broadcaster, novelist, member of the House of Lords, and holder of both a CBE and France’s Légion d’Honneur, a love of lipstick has not dimmed Baroness Greenfield’s brilliance.

And yet, still, a city editor announced that my beauty column would mark ‘the end’ of my being taken seriously, while being perfectly happy for male colleagues to take on side hustles in sport, wine or cars. She and everyone else perceived boys’ toys as big business, beauty as a ghetto for girls and gay men.

Behold, the sexism that sees ‘male’ interests as sacred, women’s as merely stupid.

The beauty industry generates this country £18 billion a year, putting it in the same bracket as the £20 billion-generating car trade.

Regardless, like fashion, it must be belittled for the simple fact that women enjoy it.

During my years as a make-up columnist, I was regularly advised that my interest made me a dimwit; typically, by people rather less educated than myself. 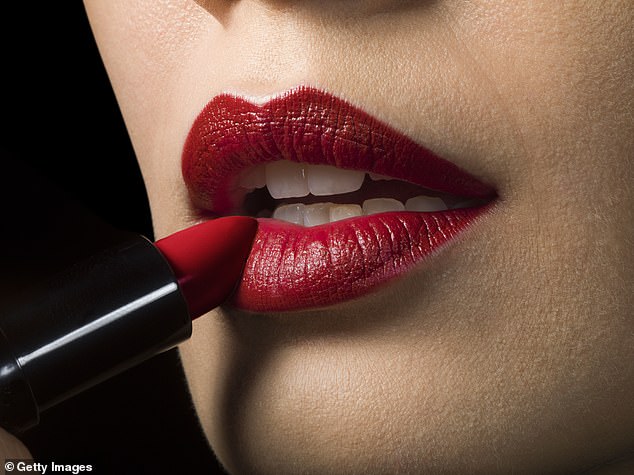 Hannah who adores make-up, said grooming is a joy, solace and an art for her (file mage)

Women, in particular, enjoyed putting me down at parties. On one occasion, some particularly scathing specimen asked a chap whether he was talking to ‘that dumb-a***d beauty journalist’ because we were sleeping together. ‘No,’ he replied, ‘she taught me at Oxford.’

Another divulged that she was surprised I could string a sentence together and that men had ‘more respect’ for her because she was ‘a natural beauty’.

Meanwhile, men might want to sleep with me, but ‘wouldn’t hang around’. I responded that I didn’t care what she or men thought: my make-up habit was about pleasing myself.

When I wasn’t being branded as vacuous for wearing cosmetics, I was being condemned as brain dead for not perceiving their destructive political force. Fellow feminists disputed that I could be one of their number, the mascara wand being that well-known tool of oppression.

Naomi Wolf’s The Beauty Myth, may have been published back in 1990, but its legacy lives on in every dinner-party bore who wields its disputed and outdated figures to argue that the industry is oppressing, and even killing, women.

Well, naysayers be damned. I adore make-up and refuse to occupy the priggish universe in which it is suspect. For me, grooming isn’t a chore, but a joy, a solace, an art.

Trowelling on the slap is my hobby, my daily expression of creativity, my morning meditation, if you will. No less a genius, Dame Joan Collins once told me she feels the same. 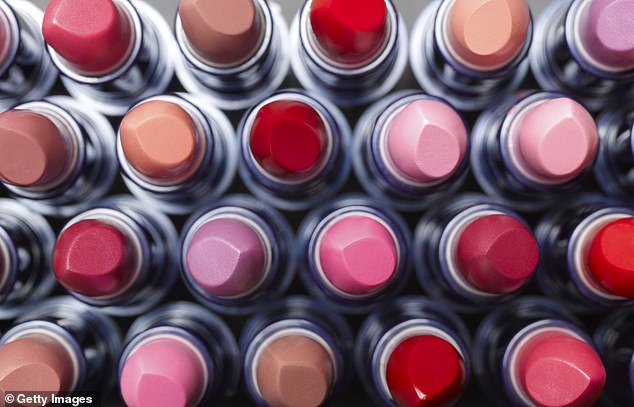 Hannah said women will be condemned however they look, whatever they do and life would be intolerably mundane without every theatre (file image)

Far from being dim, self-adornment is the sign of a civilised society. Indeed, there’s an argument that it was ornamentation that actually gave us our civilised society, Homo sapiens advancing over his rival species by bonding over baubles, bangles and, yes, make-up.

Not only is it a source of pleasure and sophistication, it is also cunning, manipulative, devious. This, of course, is what moralists have objected to from ancient times.

With it, I can look happier, healthier, more business-like or intimidating as the situation requires. It gives women the power to self-invent rather than be what authority tells us, and this is necessarily subversive.

The cosmetic arts’ great heroines have been not only intelligent, but power players, non-conformists, be it Cleopatra with her kohl, Elizabeth I and her leaden white mask, or the artfully maquillaged Mrs Thatcher.

The fact is, women will be condemned however they look, whatever they do.

When they tell us we’re wearing too much make-up, they mean we’re excessive full stop. Do what society says, back in your box.

I’d rather be too much in other people’s eyes than not enough in my own; forgo the ordinary for the extraordinary, the chaste face for the self-created. Without this everyday theatre, life would feel intolerably mundane.

Ultimately, I feel sorry for make-up’s detractors in their relentlessly realist world, faces as raw as cut thumbs.

In the end, they’re the ones who are just a little bit thick.