Estate agents are falling over themselves to talk up the growing demand for beach houses.

Sheltered among the sand dunes and the marram grass, they are some of the most sought-after homes on the market.

‘I recently had a client with £3 million to spend on one,’ says estate agent Jason Stubbs, whose company covers the coast between East Sussex and Kent. 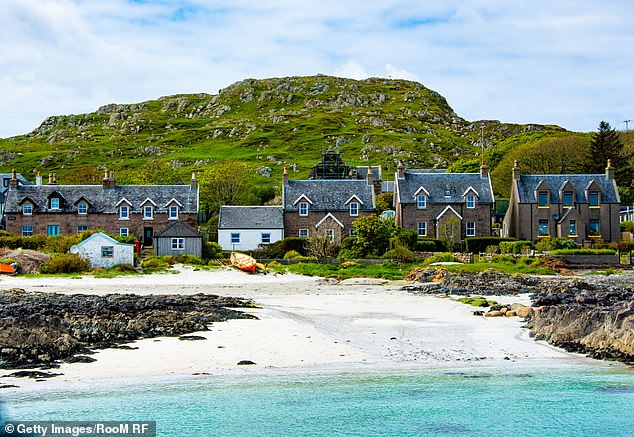 At a premium: Homes on Iona in the Inner Hebrides. Beach house lettings get eye-watering returns, especially post Covid

‘When I told him there were none for sale, he said he’d go to £6 million, just to have a beach-top position.’

Stubbs believes the lockdowns have done much to enhance the value of beach houses. Now used to Zoom calls, London businessmen and women have discovered they can work from the beach.

Beach houses undoubtedly attract their share of eccentrics. The artist, Michael B. White — who describes himself as a bohemian and a hedonist — used to own Nepenthe, an oak-and-mahogany converted look-out post half way up the cliff at Cliff End Cove between Rye and Hastings.

Then there was the 40-something international banker who earned a fortune, but one day decided that he could no longer waste his life in airports and boardrooms.

He bought a beach house at Camber Sands to spend his time with his girlfriend, playing acoustic guitar and kite-surfing. To refill the coffers, he let out the house for odd days to film companies.

It is nostalgia that brings most buyers to the sandhills in search of a home.

Sarah Rugg, 47, fell in love with Sennen Cove in Cornwall as a child and later holidayed there with her own family for 25 years.

Her ambition was to live in the area but prices had always been beyond her budget. Then she discovered that Nest Seekers International was taking offers for a rather dated house perched high above the dunes.

‘It’s those views across the beach and down the coast to Cape Cornwall that sold it to me,’ says Sarah, who works as a self-employed small business adviser in Chester. ‘I’m going to knock this place down and build a five-bedroom upside down house with a top-floor balcony.’

Although beach houses are undeniably expensive, letting during the high season is one way of taking the sting out of the mortgage payments.

Sarah is anticipating her new home costing in excess of £800,000. However, by letting to holidaymakers, she should be able to charge £6,500 a week during high season.

‘At first, I’ll be letting most of the summer,’ says Sarah. ‘I’ll move here to work from home full-time in a few years, after I have paid back some of my loans.’

Other areas are not quite so fashionable, yet the beach houses are equally impressive. At Pagham, near Bognor Regis in West Sussex there is a three-bedroom modernist beach house for sale for £1.15 million.

It has a roof garden and a terrace that leads right onto Pagham Beach (hamptons.co.uk).

You get more house for your pound in Scotland. Fishery House, Dumfriesshire, is a modern, five-bedroom home with a cinema room, gym and sauna.

The property, which has direct access to the shores of the Solway Firth, is on sale for £585,000 (finestproperties.co.uk).

There are also drawbacks to owning a beach house. Being open to winter storms, maintenance is an on-going chore.

Their situation often means being a fair distance from the nearest amenities. Gardeners will not get much joy from the sandy soil.

Most seriously, the house may be vulnerable to coastal erosion. It would be wise to have a survey carried out before buying.

Yet none of this will deter the true beach house aficionados.

‘These properties are sensational and rare as hen’s teeth,’ says Jo Ashby, a director with John Bray estate agents, who claims to have one of the most dramatic beach houses in Cornwall about to come on the market. ‘Buyers want a new lifestyle and nothing else will do.’

On the market… By the seaside