Ants are among the most industrious creatures on Earth, so it’s only fitting that engineers would look to them for inspiration when designing small robots that can collaborate on complex tasks and maneuver through uneven territory.

Engineers at University of Notre Dame created a simple but effective swarm of six-inch ‘robot’ ants that were able to overcome obstacles and terrain individually, and link up to form longer chains when they couldn’t accomplish a task alone.

Each automaton was equipped with a micro-controller and a lithium polymer battery.

They also had a LED light sensor at the front for alerting the swarm and magnetic touch sensors at both ends that would allow them to link up with one another.

Yasemin Ozkan-Aydin, an electrical engineering professor at Notre Dame who worked on the robotic insects, told SYFY Wire she thought their best use would be in space exploration. 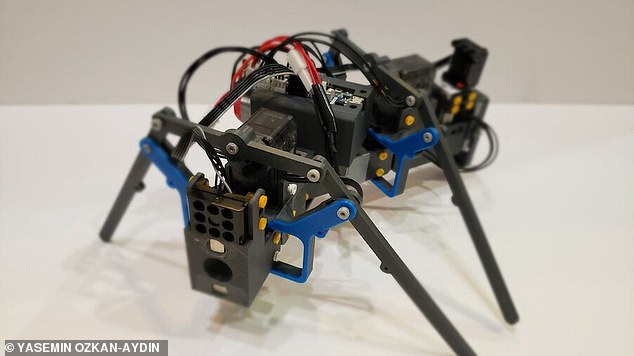 ‘They are small and inexpensive. Size and weight are considerations for space travel, so that makes these sorts of systems ideal for that,’ Ozkan-Aydin said.

‘And there’s no upper limit to the size of the swarm, so you could continue to add to it as needed.’

‘Legged robots can navigate challenging environments such as rough terrain and tight spaces, and the use of limbs offers effective body support, enables rapid maneuverability and facilitates obstacle crossing,’ Ozkan-Aydin said in a statement.

But such automatons can face mobility issues in natural environments, reducing movement and performance. 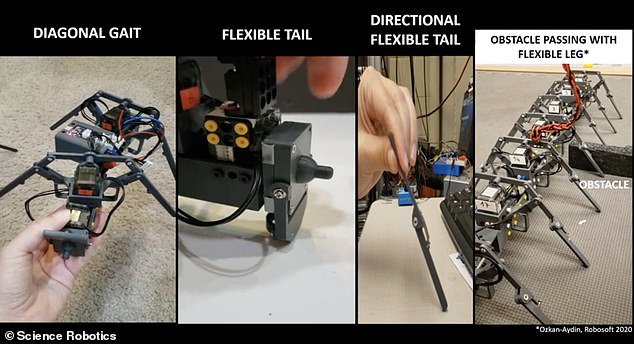 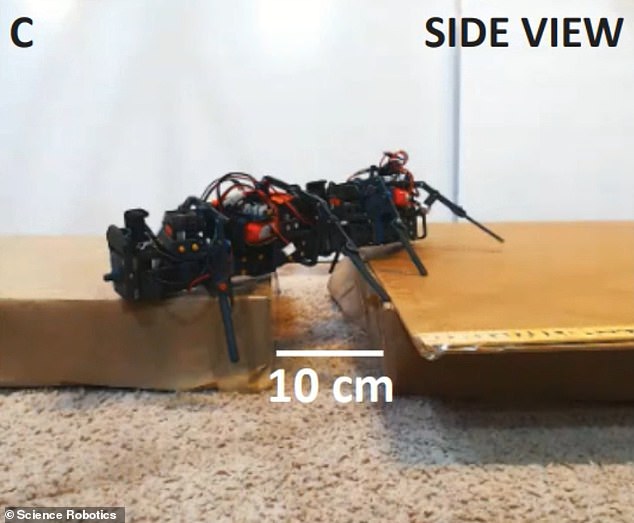 If facing an obstacle it couldn’t overcome alone, the robot would light up its LED to notify the swarm it needed assistance. To traverse uneven terrain, the robots might link up into long chains.

The wheeled robots often used in space can be hampered by uneven terrain, as well.

‘When ants collect or transport objects, if one comes upon an obstacle, the group works collectively to overcome that obstacle,’ she said in the release. ‘If there’s a gap in the path, for example, they will form a bridge so the other ants can travel across.’

That gave her and Daniel Goldman, a physicist at the Georgia Institute of Technology, the idea for their robot ‘ants.’

The pair designed a group of four-legged robots, each measuring 6 to 8 inches long— small, but still at least three times the size of the largest real ant.

Because they were conducting their experiments during a pandemic lockdown, they had to work from home and use readily available materials. 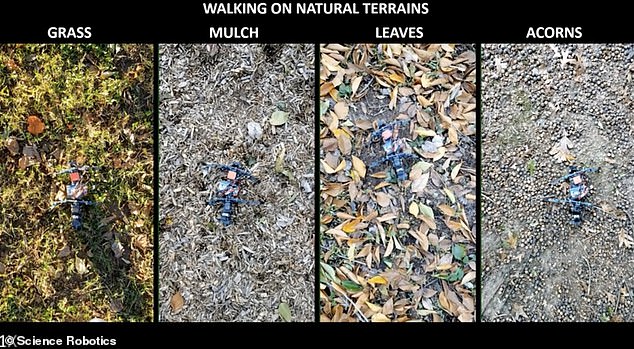 Out in the field, the robots were directed to traverse grass, mulch, leaves, and acorns

The robots were printed on a 3D printer and have motors available at a typical hobby shop.

‘Anyone with access to a 3D printer and a few hundred dollars could build these,’ Ozkan-Aydin told SYFY Wire.

Ozkan-Aydin and Goldman made the robots’ legs flexible to reduce the need for more sensors.

‘The flexibility in the legs helps the robot to move right past [any obstacles],’ Ozkan-Aydin said. 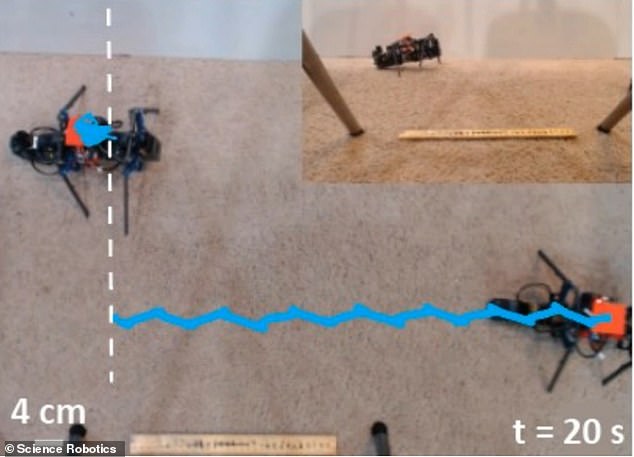 When an individual ‘ant’ became stuck, its light turned on, signaling to other robots it needed help. Another robot’s LED sensor would measure the gradient of the light and understand when it was getting closer to its comrade in distress

As a result, the robots ‘can test for gaps in a path, building a bridge with their bodies; move objects individually; or connect to move objects collectively in different types of environments, not dissimilar to ants.’

Out in the field, the robots were directed to traverse grass, mulch, leaves, and acorns.

Back at home, they examined their maneuverability over shag carpeting, ‘stairs’ made of insulation foam, and particleboard covered with various rectangular wooden blocks.

They were tasked with moving objects in the various environments. 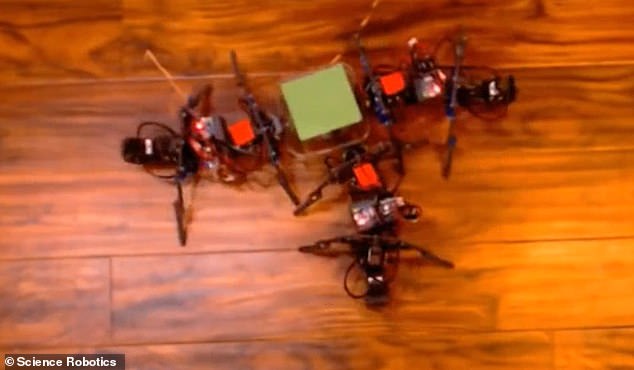 For a task requiring moving an object, several bots might come at it from different angle and share the load

In a report published in Science Robotics, Ozkan-Aydin and Goldman indicated their swarm was able to fulfill every task they were given.

When an individual ‘ant’ became stuck, its light turned on, signaling to other robots it needed help.

Another robot’s LED sensor would measure the gradient of the light and understand when it was getting closer to its comrade in distress.

For a task requiring moving an object, several bots might come at it from different angle and share the load.

To traverse uneven terrain, the robots might link up into long chains.

The team had started out with a centipede design, but went with the ant configuration because it’s more modular.

‘You can use as many robots as are needed for a specific task,’ Ozkan-Aydin told SYFY Wire. ‘In one of our experiments they had to navigate a narrow maze, a larger robot wouldn’t have been able to do it.’ 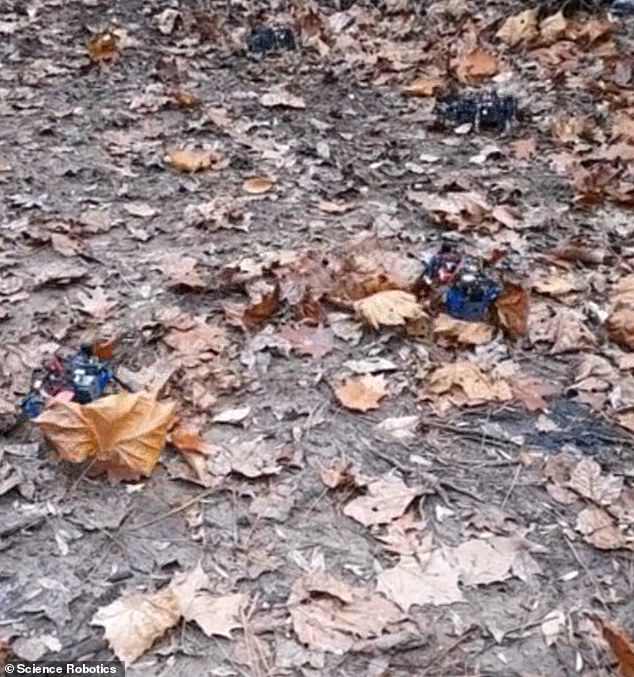 There would have to be adjustments to make a design that was truly sustainable, she added, notably to the battery.

Additional sensors and more powerful motors would also be required, she added, while still keeping the robots small.

‘You need to think about how the robots would function in the real world,’ she said. ‘Everything is limited so you need to make decisions with every part of the machine in mind.’