The peer, formerly Labour MP Kate Hoey, spoke out after several days of sporadic violence north of the border which have seen running clashes with the police. On Sunday, four masked men boarded the double-decker in Church Road at an entrance to the Rathcoole estate in Newtownabbey, County Antrim, at about 7.45pm on Sunday, ordering the driver and passengers off the vehicle.

The bus was then set on fire, with the charred remnants still smouldering later that evening as police in armoured vehicles monitored the scene.

Baroness Hoey, who stood down as MP for Vauxhall at the 2019 election, told Express.co.uk: “Hijacking buses is not the way to solve the crisis facing Northern Ireland over the Protocol.”

Nevertheless, she said: “The Government needs to show that time has run out on the negotiations with the EU.

“And Article 16 must be triggered now and then legislation introduced to guarantee Northern Ireland a place within the UK internal market.” 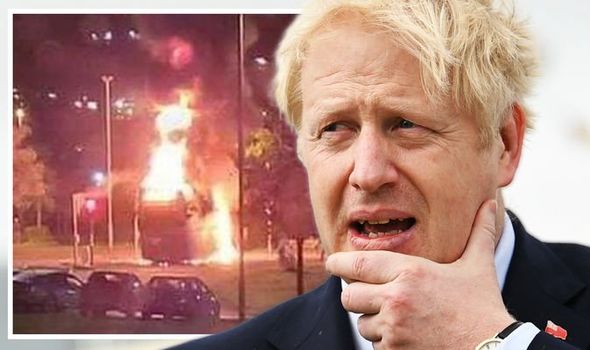 Baroness Hoey warned: “There is no doubt that a huge amount of work was done by political and community leaders over the past few months to try to prevent unrest but if action is not taken urgently tensions will rise.

“Today we are likely to see the Progressive Unionist Party withdraw its support for the Belfast/GFA which is a significant move and one that Gov and the EU need to take heed of.”

Last Monday a bus was hijacked and burned in a loyalist area of Newtownards, Co Down, in another apparent protest against the Northern Ireland Protocol.

The violence involving youths from the nationalist Springfield Road and loyalist Shankill Road saw police being attacked with missiles and fireworks on Wednesday and Friday night.

The bus was set on fire in Antrim on Sunday (Image: Belfast Live)

He tweeted: “Such criminal behaviour could lead to death or serious injury.

“This only harms local people and local communities. It serves no cause whatsoever. The ringleaders should step back. Change is brought about by politics not by burning buses.”

Sinn Fein North Belfast MLA Gerry Kelly said: “The hijacking and burning of a bus and threats to a driver in Rathcoole is dangerous, reckless and despicable.

“There is absolutely no place in our society for this criminality and violence.”

Confirming Baroness Hoey’s prediction, the Progressive Unionist Party (PUP), which is politically aligned to the paramilitary Ulster Volunteer Force, on Monday said there was “no basis” for unionists to continue to support Northern Ireland’s historic peace accord.

The PUP claimed the consent principle, which is central to the 1998 Good Friday/Belfast Agreement, had been undermined by Brexit’s Northern Ireland Protocol.

Apart from the protocol, party leader Billy Hutchinson said the peace process flowing from the agreement has not faithfully observed the text of the accord and has instead led to an incremental weakening of the Union by delivering repeated concessions to nationalists.

The principle of consent means there can be no change to Northern Ireland’s constitutional status without the backing of a majority of people in the region.

Loyalists angry at the Brexit protocol claim the imposition of economic barriers on trade between Great Britain and Northern Ireland has changed the region’s constitutional position within the UK.

The support of the PUP and other loyalist representatives was crucial in concluding the Good Friday/Belfast Agreement deal that largely ended decades of conflict in Northern Ireland.

Mr Hutchinson said the principle of consent has been exposed as “little more than a deceptive snare”.

He said: “It is my view that if, as is currently the case, the constitutional guarantee is not as was promised to the unionist community, then there is no basis for unionist support for the Belfast Agreement.

“If the ‘process’, as it seems, is little more than a vehicle to incrementally dismantle the Union we cherish, then the Progressive Unionist Party will be champions of peace, but firm opponents of the process.”

In March, an umbrella group representing three loyalist paramilitary groups – the UVF, Ulster Defence Association and Red Hand Commando – announced they were temporarily withdrawing their backing of the Good Friday accord.

The PUP currently has no MLAs at Stormont and three local councillors out of a total of 462 council seats in the region.