In the first extract from his new memoir in the Mail on Saturday, Brian Cox revealed how he adored playing monstrous mogul Logan Roy — back on our screens tonight — in the hit series Succession.

Today, he shares memorable moments from his long career — and a startling encounter with a member of the Royal Family.

When I learned that I was to appear in an episode of Hammer House Of Horror opposite Peter Cushing it never crossed my mind that it might be dangerous. I was simply delighted.

It meant I got to work with one of cinema’s great gentlemen, a man who could boast of having worked with Laurel and Hardy among many, many others.

In the episode, he starred as a sinister pet shop owner.

At the back of the shop were tigers and panthers and it was my job as his just-out-of-jail and newly employed assistant to look after the big cats.

We were shooting a scene where I feed the animals.

Brian Cox, 75, at the European Premiere of Succession this week, which is now on its third season

My character’s in a cubicle with the panther and I had to approach a large electrical console and activate a lever, at which point sparks were supposed to come shooting out.

For safety reasons there was a sheet of glass between me and the panther, but thanks to the magic of film it looked as though we were in the room together.

As ever when filming these things, there were ‘issues’. . . ‘Brian, would you mind if we move the glass?’

‘Why do you need to move the glass?’ I asked, eyeing the panther nervously.

‘We’re getting a bit of reflection.’

‘But isn’t the glass supposed to stop the panther eating me?’

There was laughter. ‘Don’t worry, Brian, the trainer’s here.’

I went over to the console and pulled the lever. Bang. Sparks flew everywhere. Sparks went right up the panther’s jacksy and the panther went nuts.

I’m now able to state with some authority exactly what happens when you shoot special effects up the backside of a panther.

One, the panther will go berserk. Two, the crew will show a turn of speed hitherto undreamed of.

I was still standing there, frozen to the spot, my hand on the lever, when I looked around to see that the room was deserted.

The only living things left were me, the berserk panther and — thank God for small mercies — the trainer.

The panther was placated. I was neither mauled nor eaten and lived to fight another day. 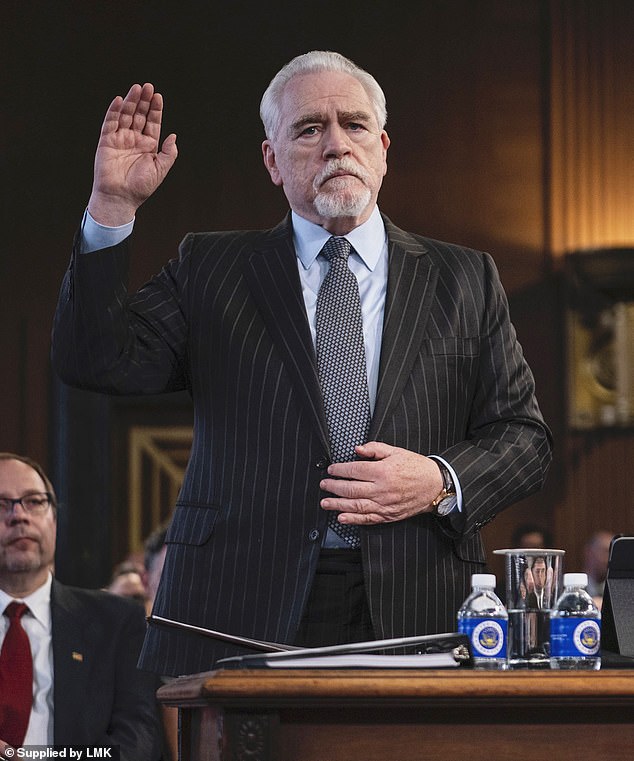 Cox pictured in his role as Logan Roy in HBO series Succession. The Roy family is known for controlling the biggest media and entertainment company in the world

But I learned a very valuable lesson that afternoon. When the crew say, ‘Can we move the glass?’ you say, ‘No. The glass stays.’

Nor was I expecting danger when I agreed to be in Therese Raquin, a TV adaptation of Emile Zola’s novel about murder and adultery, with Alan Rickman and Kate Nelligan.

I was playing Laurent and was aware the script included a steamy sex scene between me and Kate.

But whether through embarrassment or some clever psychological ploy known only to him, the director had not mentioned that we would have to take our clothes off.

Anyway, it was about 1am when we got to this scene. We got into bed. The director appeared. ‘Ah, you have your clothes on.’

‘Then your clothes should not be on.’

‘Yes, they do. Sometimes they do.’

‘No, they don’t. Not all their clothes anyway. There has to be some clothes missing.’

I’d known the scene was approaching and so, to gird my loins, so to speak, I’d been swigging from a large bottle of vodka and orange, and whether that had anything to do with my arguments, I shall leave you to decide.

Anyway, I began to disrobe until eventually all that covered my modesty was a bed sheet.

Kate went somewhere private, returning with a retinue of dressers clustered around her.

I joined her in the bed. She wore nothing on top, but down below she wore a pair of strange tights which were cut off at the knee.

Next, she began to oversee the arrangement of her monitor. As I positioned myself on top of her, she said, ‘Can you check the monitor? I don’t want to see it. Will you do it for me?’

I looked across to the monitor. Something wasn’t quite right. Kate had a large wedge-like shape around her thighs.

‘Kate, there’s something wrong with your tights.’

‘Well, it looks as though you’ve some kind of growth on your leg.’

‘It’s your tights. I think they’re sort of rolling back down your thighs.’

Things were getting a bit strange by now.

But as we were holding up the shoot and everybody wanted to go home, Kate evidently decided that modesty be damned and so, without warning, yanked down the tights to remove them completely.

Keywords there being ‘without warning’.

The suddenness of the motion, not to mention its vigour, caught me by surprise and I had no chance to get myself, and more importantly my private parts, out of the danger zone.

‘Ow!’ I cried. God knows what those tights were made of. Some kind of military-strength fabric, bulletproof, even. I don’t know.

All I know is suddenly my eyes were watering and I was experiencing a hideous, painful sensation in my nether regions.

‘Oh, Brian, I’m so, so sorry,’ said Kate, knowing that she had inadvertently caused me pain but unaware of its exact nature because, yes, as it later transpired, the tights had given me a truly unique and memorable friction burn…

And talking of danger… how unusual this is I’m not sure, but I was once touched up by Princess Margaret.

It was 1969, during the stage play of In Celebration with Alan Bates and James Bolam at the Royal Court.

One night we were informed she and her husband, Lord Snowdon, were in to see the show.

After the performance, which coincided with my birthday, we all trooped into Alan’s dressing room.

I was wearing a red shirt, given to me as a present by the director Lindsay Anderson, and looked very swish as I was introduced to HRH in a corner of the room.

‘I thought you were so wonderfully hooded,’ she said to me. ‘I really wanted to know more about you.

I didn’t know who you were and, as a result, I was transfixed by you for the whole evening.’ 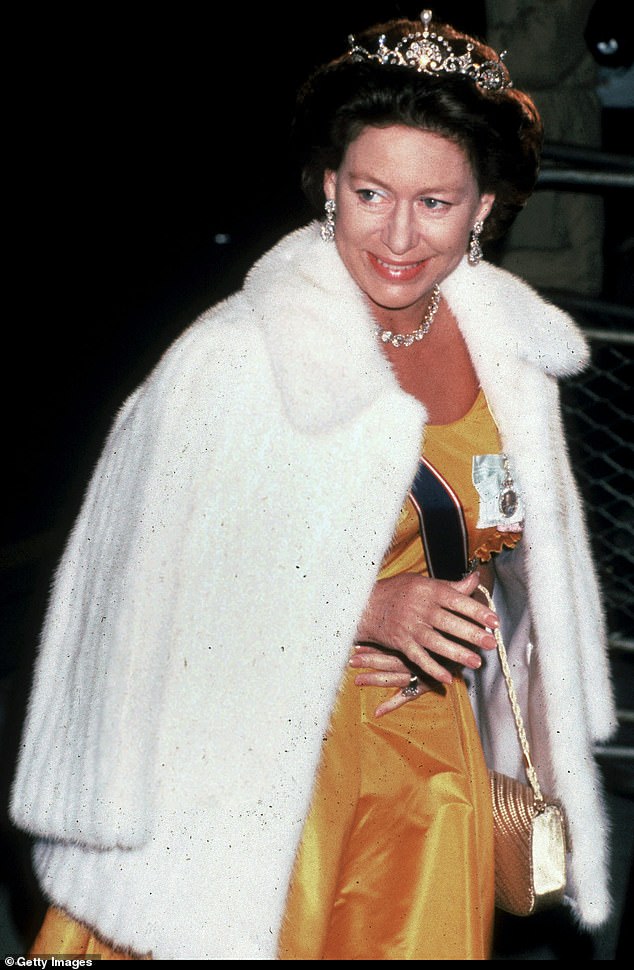 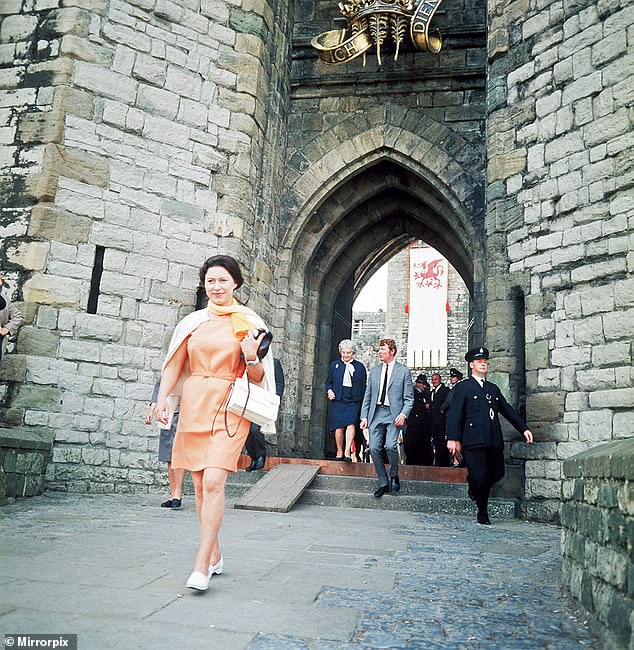 Princess Margaret, pictured in 1969. In an excerpt of his memoir The Rabbit In The Hat, he describes the moment the Princess unbuttoned his shirt and placed her hand on his chest

‘Thank you, Ma’am,’ I said, with suitable deference. The conversation duly moved on to the fact that it was my birthday and that I’d been given this lovely red shirt by Lindsay Anderson.

‘Oh yes,’ she said admiringly, ‘it really is a lovely shirt, isn’t it?’ And with that she put a hand to my chest, undid one button and slid her hand inside.

I froze. Her hand was inside my shirt and travelling in the direction of my left nipple, yet the princess was just chatting away as though this was something she had done a hundred times before.

Suddenly, Jimmy Bolam was there. Now, Jimmy is unpredictable — maybe not the first person you’d go to for a sensible, considered response in a situation like that.

It was within his gift to take a bad situation and make it worse.

Sure enough, that’s what he did. He said, ‘Ooh.’ At this point he was standing with his back to the room, creating a barrier between me and Princess Margaret, and everybody else.

The ‘everybody else’, don’t forget, included her husband.

‘Ooh.’ He did it again. And with the whole terrible surreality of the situation threatening to engulf me, I found some semblance of composure and blurted out, ‘Oh, Ma’am, I have to return to my dressing room. I’ve left something there.’

And with that, I beat a hasty retreat, bowing and scraping, and sliding past Jimmy Bolam to head for the door and out to safety.