COVID-19 cases among children are continuing to rise as the U.S. heads towards the holiday season, a new report finds.

A total of 122,229 kids tested positive for the virus during the week that ended on November 11, according to the American Academy and Pediatrics (AAP).

America as a whole is experiencing a slight increase in COVID-19 infections ahead of the holiday season, and some experts believe cold weather could be fueling the increase.

Children accounted for 27% of new COVID-19 cases last week, and increase from the 24% of cases the year before

This followed a national trend of cases trending downwards as the Delta variant-fueled summer surge began to wind down.

Cases have begun to rise once again in recent days, though, as the pandemic is trending in the wrong direction ahead of the holiday season – just as it was around this time last year.

Children are also beginning to account for a larger share of cases, making up 27 percent of active cases last week compared to 24 percent the previous week.

Cases among children are not as dangerous as they are among adults, though, and most are either mild or asymptomatic.

Youth Covid deaths also decreased for the second consecutive week, with 11 deaths reported by the AAP, down from 14 and 16 in the previous two weeks.

Children account for less than 0.01 percent of Covid deaths in the U.S., with 625 dying from the virus.

The South once dominated Covid cases, but now the virus’s burden is starting to move elsewhere.

According to the AAP, new cases in the southern region remained steady, with more than 20,000 recorded.

All of the other four categorical regions recorded increases in cases last week.

Cases in the south (green) remained steady last week, the only of the four regions to not report an increase in cases. The 42,000 new cases in the Midwest (purple) were the most of any region

The Midwest accounts for the most cases, recording around 42,000 during the week, an increase from around 35,000 a week earlier.

Cases in the West also slightly increased to just over 35,000.

Throughout the pandemic, the Northeast region has avoided the brunt of the virus.

The region’s cases are still the lowest of any of the four, with just over 20,000 new cases, but they are beginning to trend upwards, jumping around 25 percent from 15,000 cases the week before. 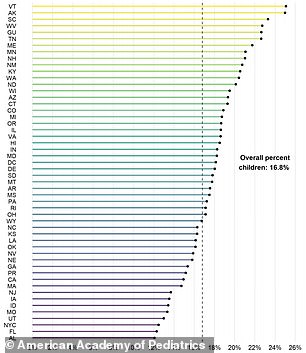 More than one of every four Covid cases recorded in Vermont since the start of the pandemic were among children, the most of any state

Overall cases are increasing across the northeast U.S., as cold weather begins to settle in the region.

Experts believe the colder weather has pushed many to hold gatherings and activities indoors, where Covid transmission is more likely.

Some fear in could be a harbinger for another massive winter surge – like the 2020 holiday season surge that is still the biggest the U.S. has experienced during the pandemic.

Vermont has been the hardest struck state by the recent northeastern case surge, with the state suffering an 80 percent increase in Covid cases over the past two weeks.

The Green Mountain State is also now the leader in highest share of cumulative cases being among children, overtaking Alaska this week.

One out of every four positive Covid tests in Vermont since the pandemic began in Spring of last year has been among children.