They’re both known for their winning senses of humor.

And Chrissy Teigen and John Legend both think that humor might be the key to Kim Kardashian’s rumored romance with Saturday Night Live star Pete Davidson.

The 35-year-old model and the 42-year-old singer weighed in on Kim and Pete’s recent dates when a TMZ videographer stopped them on Wednesday outside her office in Los Angeles. 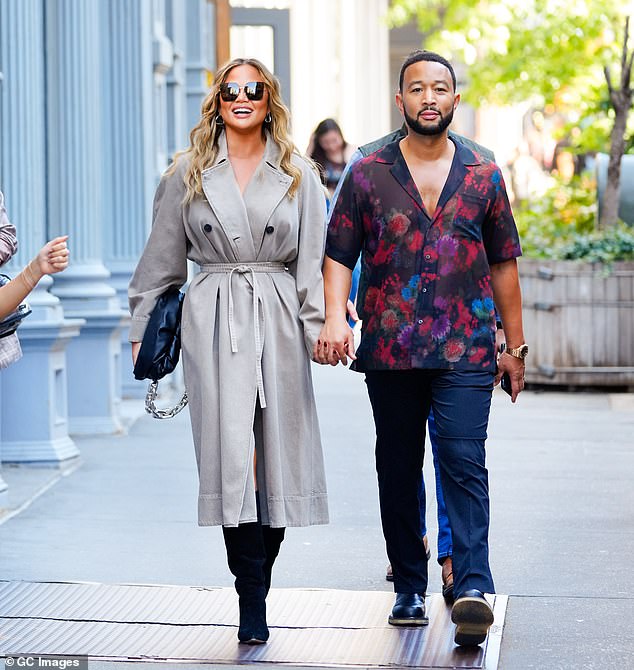 Make ’em laugh: Chrissy Teigen, 35, and John Legend, 42, speculated that Kim Kardashian, 41, might be drawn to Pete Davidson’s sense of humor when approached Wednesday by TMZ; seen in September in NYC

The cameraman first warmed up Chrissy and John by complimenting her for reaching number two on the New York Times Best Sellers list with her new cookbook Cravings: All Together.

When she was asked about ‘Pete Davidson for Kim,’ Chrissy pleaded ignorance.

‘Everybody’s asking me! I have no idea,’ she said, adding that she didn’t ‘know either way’ if the Pete and Kim were or were not dating.

However, she was willing to weigh in on whether a comedian was ‘good for’ the 41-year-old Keeping Up With The Kardashians star.

Out of the loop: Chrissy said she had ‘no idea’ if Kim and Pete were dating. However, she admitted Kim might appreciate Pete’s sense of humor. ‘Funny guys do a lot,’ she said 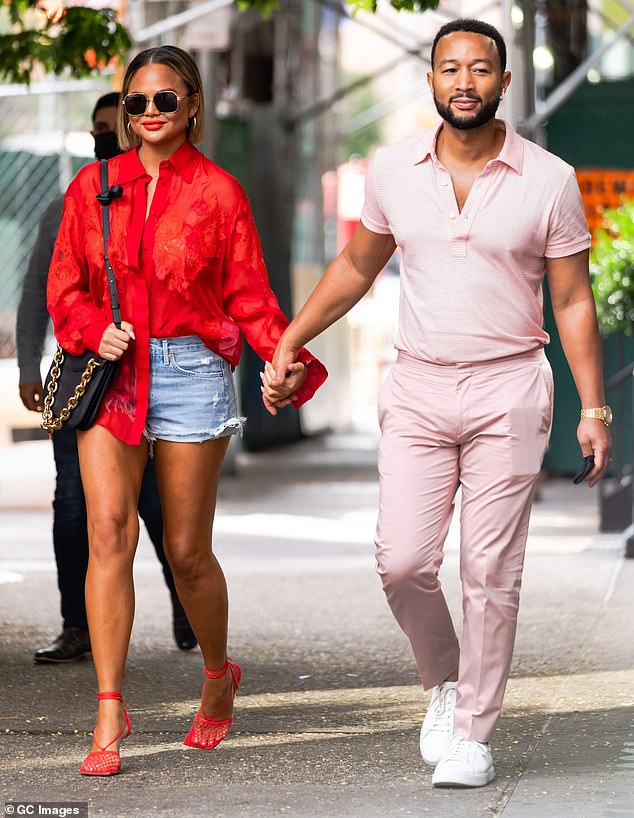 What women want: She called John ‘hysterical’ as an example, and he didn’t disagree. ‘I’m hysterical. Who wouldn’t want to be in love with a funny guy,’ he said before laughing; seen in August in NYC

The R&B star was in total agreement when it came to his sense of humor.

‘I’m hysterical. Who wouldn’t want to be in love with a funny guy,’ he said with a perfect deadpan, before bursting out with some chuckles.

The cameraman then asked if the two would be up for a double date with their friend Kim and Pete.

‘I have no idea if it’s true, so I can’t say,’ Chrissy replied as she continued to laugh.

However, she seemed to agree that her pal might be looking for someone more lighthearted after spending so much time with her estranged husband Kanye West.

After the videographer suggested that ‘humor is the way to a girl’s heart,’ Chrissy added, ‘Yes, that’s what John knows best.’ 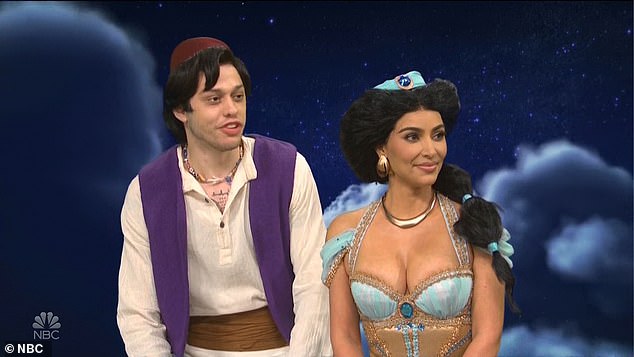 The potential couple performed together when Kim recently hosted Saturday Night Live, and they even kissed atop a magic carpet in an Aladdin-themed sketch 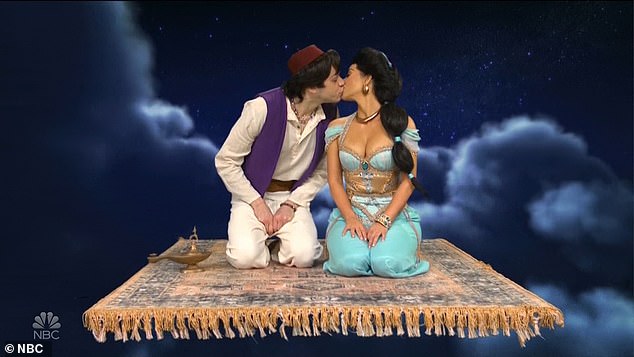 Confidence: Chrissy joked that Pete’s ‘BDE’ was ‘probably’ a factor in any possible romance with Kim

They also brought up the possibility that Pete’s alleged BDE (or big d**k energy) might have played a role in their reported romanced.

The term was coined on social media as a tribute to the late chef, author and TV host Anthony Bourdain following his death, but it was later used to describe Pete.

In 2018, his then-girlfriend Ariana Grande claimed in a since-deleted tweet that Pete had a ten-inch penis.

Although the raunchy term appears to refer to penis size, it’s primarily used to describe people who have an aura of confidence in themselves.

‘It’s definitely a thing, for sure,’ Chrissy said, adding that it was ‘probably’ a factor for Kim.

She wasn’t willing to offer any advice for Pete, though, as she doesn’t know him, and she said she planned to ‘let them be.’

But as for the possibility of a hilarious double date in the future, she wasn’t opposed to it.

‘I wouldn’t mind, no,’ she said as she closed her gate and headed into her office with John and their two children, Luna, five, and Miles, three. 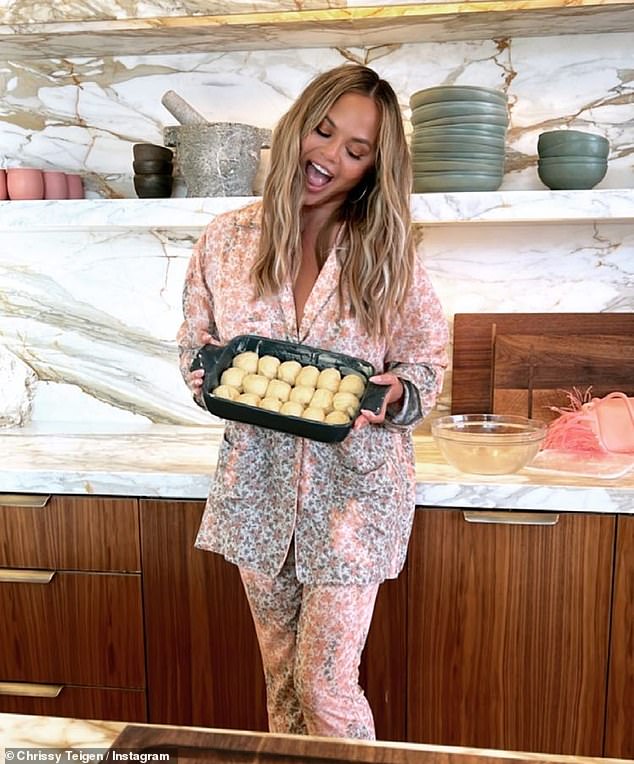 Not saying no:  As for the possibility of a hilarious double date in the future, she wasn’t opposed to it. ‘I wouldn’t mind, no,’ she said 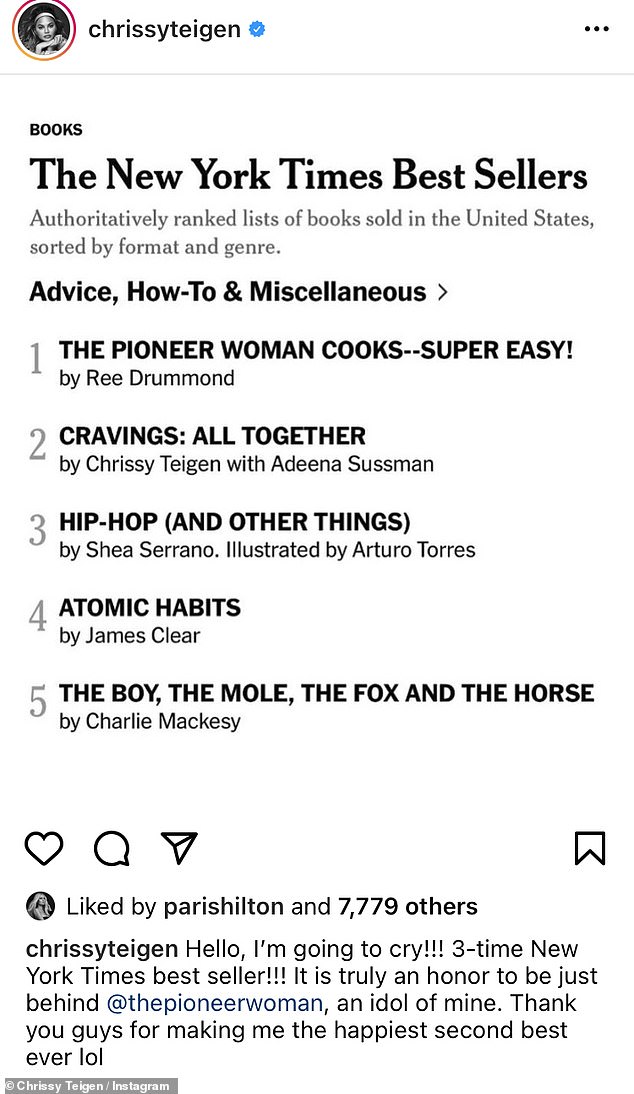 Chrissy’s sighting comes as she enters the public eye more after taking a hiatus from social media after bully tweets she sent to social media star Courtney Stodden were unearthed, including messages in which she appeared to encourage them to commit suicide when they were still a teen.

Lately, she has been focused on promoting her new cookbook, which was in the works prior to the social media scandal.

Later on Wednesday she celebrated reaching number two on the New York Times Best Sellers list for advice books while saluting Ree Drummond for taking the number one spot with her cookbook The Pioneer Woman Cooks — Super Easy!

Kim and Pete are said to be ‘just friends right now,’ but they  enjoyed a secret dinner date at one of his favorite pizzerias, Campania restaurant, on Tuesday, according to TMZ.

They were spotted out again for a dinner date on Wednesday night as well.

Rumors of a relationship between Kim and Pete went into overdrive over the weekend after they were seen holding hands while on a rollercoaster at Knott’s Berry Farm in Buena Park, California.

The potential couple performed together when Kim recently hosted Saturday Night Live, and they even kissed atop a magic carpet in an Aladdin-themed sketch.

Getting serious? Kim and Pete are said to be ‘just friends right now,’ but they enjoyed two low-key dinner dates this week and were seen holding hands on a roller coaster in California on Friday