The Centers for Disease Control and Prevention’s (CDC) advisory committee has officially recommended Pfizer-BioNTech’s COVID-19 vaccine for children aged five to 11 on Tuesday.

The members of the Advisory Committee on Immunization Practices (ACIP) voted unanimously that pediatric doses be distributed in this younger age group.

It comes less than aw U.S. Food and Drug Administration (FDA) authorized the shots for youngsters.

Until the FDA announced its decision, ACIP was unable to recommend doses for children, a necessary step before pharmacists or clinicians can immunize kids.

CDC director Dr Rochelle Walensky is not bound to follow the advisory group’s recommendations, but the agency rarely goes against the guidance of ACIP, and she is expected to sign off on the recommendations tonight.

This means 28 million children will likely be able to get vaccinated starting on Wednesday.

Parents have been split 50/50 over vaccinating children because kids rarely get severely ill and make up less than 0.1 percent of all Covid deaths.

And a member of the FDA advisory panel abstained from a vote on recommending the shot to kids last week because he said there is not enough evidence that all children need the shot. 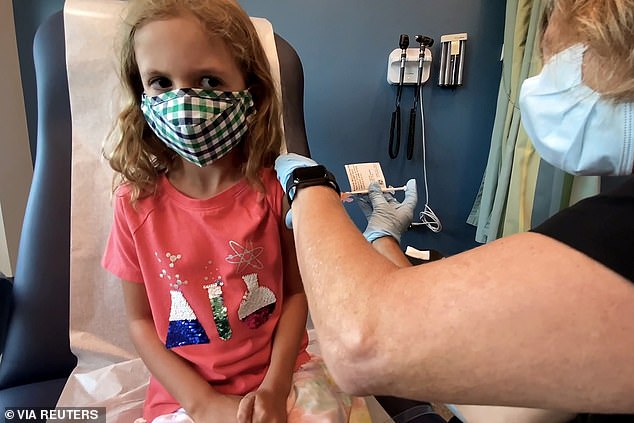 The CDC’s advisory committee recommended approval of Pfizer-BioNTech’s COVID-19 vaccine for children aged five to 11 on Thursday. Pictured: Lydia Melo, 7, is inoculated with one of two reduced doses of the Pfizer COVID-19 vaccine during a trial at Duke University in Durham, North Carolina, September 2021 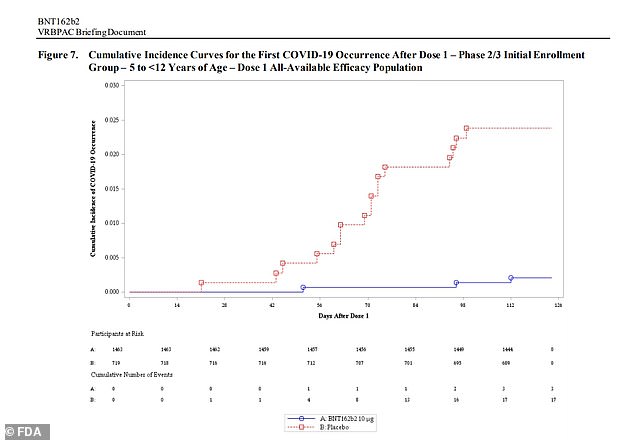 Two weeks ago, Pfizer posted details of a study online last week showing its COVID-19 vaccine is about 91 percent effective against infection in elementary school-aged children.

For the study, Pfizer recruited 2,268 children between ages five and 11.

This is much smaller than the 30,000 participants that the firm recruited for the vaccine trial in those aged 16 and older.

About half of the kids were given two doses 21 days apart and the other half were given placebo shots.

The team then tested the safety, tolerability and immune response generated by the vaccine by measuring antibody levels in the young subjects.

Pfizer said it had selected lower doses for COVID-19 vaccine trials in children than are given to teenagers and adults. 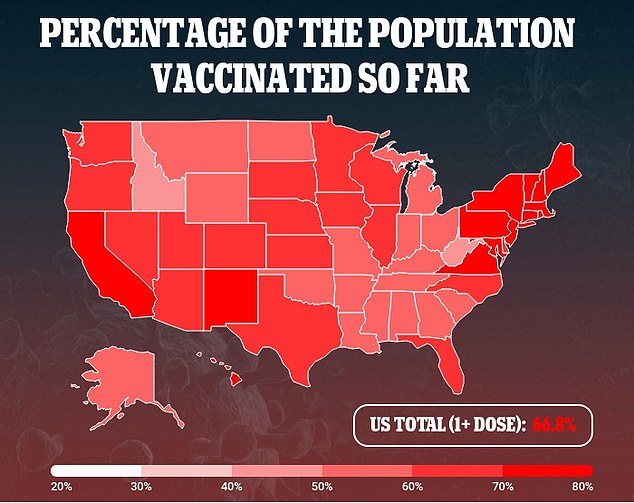 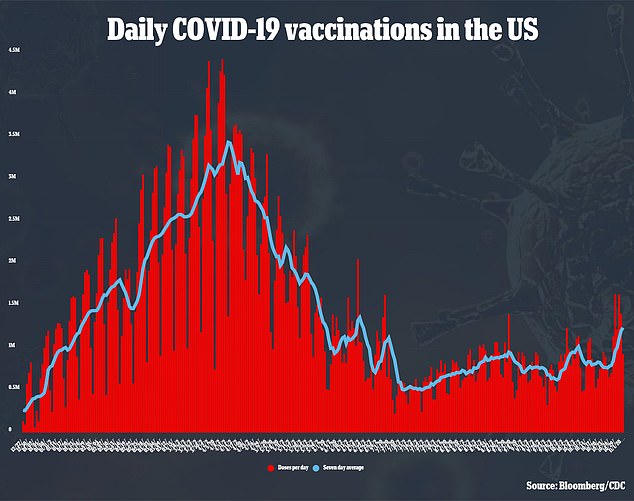 Those aged 12 and older receive two 30 microgram (μg) doses of the vaccine.

However, children between ages five and 11 were given 10 μg doses – one-third of the size given to adolescents and adults.

Sixteen children who received the placebo contracted COVID-19 compared with three in the vaccinated group, which Pfizer said equates to 90.7 percent efficacy.

In the vaccination group, one participant each had two, three and four Covid symptoms.

Comparatively, in the placebo group, half of the pediatric patients had five or more symptoms.

No life-threatening adverse events were reported with the most common side effect being pain at the injection site, reported in more than 70 percent of kids.

This is about equal with the up to 83 percent of 16-to-25-year-olds in the adult clinical trial who reported the same thing.

No deaths occurred in either the vaccine group or the placebo group. 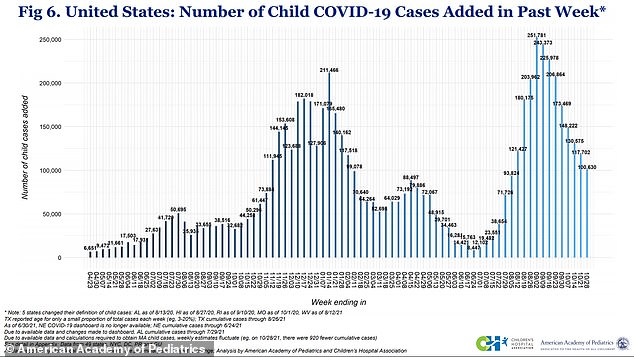 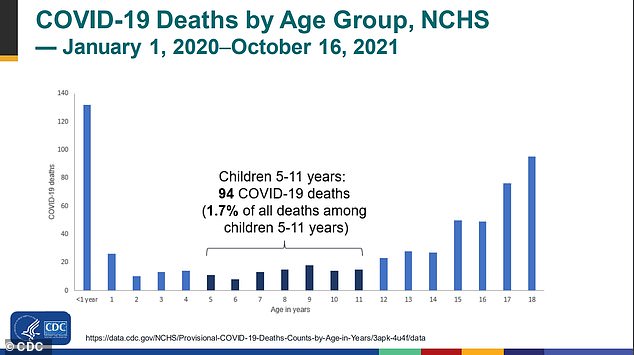 There have been fewer than 600 deaths among children since the pandemic began, with just 94 occurring among the aged 5-11 group 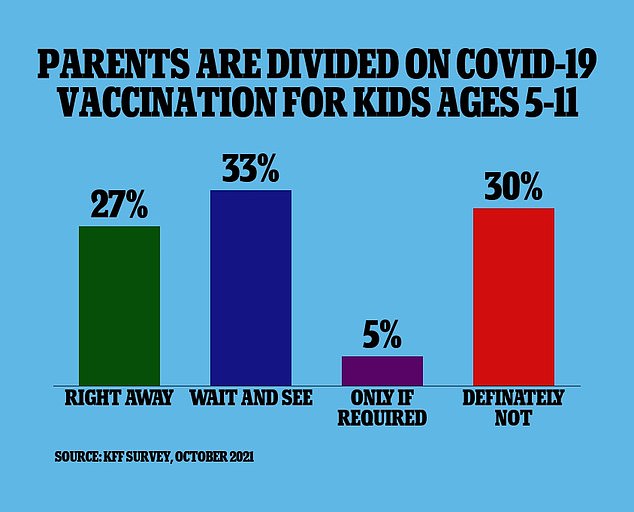 Because of the low risk of severe illness, more than one-third of parents with children in the 5-11 age range are not planning to get their kids vaccinated against Covid, an October survey from the Kaiser Family Foundation found

Pediatric cases increased from 71,000 per week at the beginning of August to more than 243,000 in early September, fueled by the Delta variant.

However, they now appear to be trending downward with about 101,000 recorded last week, according to a report from American Academy of Pediatrics.

There have also been at least 558 pediatric deaths since the start of the pandemic, with 94 of those occurring among five-to-11-year-olds.

This means that children make up less than 0.1 percent of all Covid deaths in the U.S.

Because of this low risk of severe illness, polls have shown that many parents are not inclined to vaccinate their children.

New survey data published on Thursday from the Kaiser Family Foundation found 27 percent of parents with kids aged five to 11 say that their children will get vaccinated as soon as it’s available.

Meanwhile, 33 percent say they will ‘wait and see’ how the vaccine is working before deciding whether or not to immunize their kids.

Dr Michael Kurilla (pictured), of the NIH’s National Center for Advancing Translational Sciences, was the only member to abstain  in the FDA’s advisory committee vote of 17-0-1 to recommend approval of COVID-19 vaccines in children ages five to 11

But it’s not just parents who are wary about vaccines in kids.

Last week, the FDA’s Vaccines and Related Biological Products Advisory Committee voted 17-0-1 that benefits of the vaccine for kids aged five to 11 outweigh the potential risks.

Dr Michael Kurilla, the director of the Division of Clinical Innovation, at the National Institutes of Health’s (NIH) National Center for Advancing Translational Sciences, who was the only member to not vote ‘yes’, told DailyMail.com there were several reasons behind his abstention.

Kurilla says there are children at high-risk of severe Covid due to underlying conditions who would benefit from the shot, but he’s not sure if this applies to all kids in this age group.

Additionally, he said that kids who have been infected with Covid in the past already likely have immunity because of it.

Kurilla added current data does not suggest the vaccine’s protection will last long enough and he is worried that antibodies will wane in children as has been seen in adults. 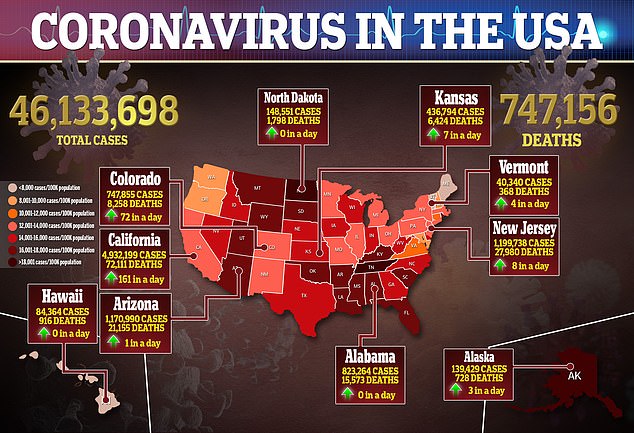