Having warned world leaders at Cop26 that we’re in ‘the last chance saloon’ to save the world from runaway climate change, Prince Charles could now be called upon to help solve an explosive issue in a usually far more bucolic field.

I hear the Aberdeen-Angus Cattle Society, of which the heir to the throne is patron, is riven with animosity because of a ‘beef’ between its two leading figures.

Charles, who has worked hard to promote Aberdeen-Angus cattle, will be dismayed to hear that the society’s president, David Ismail, has abruptly quit after locking horns with a fellow cattle farmer.

Laying bare the rift. Ismail declares that he resigned ‘because of my inability to work with the chief executive, Barrie Turner’. 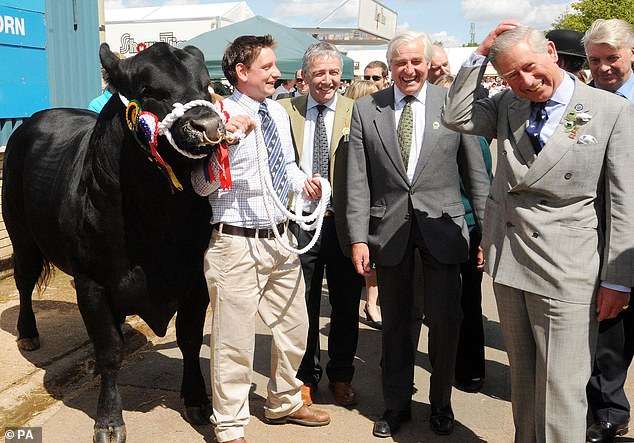 I hear the Aberdeen-Angus Cattle Society, of which the heir to the throne is patron (right), is riven with animosity because of a ‘beef’ between its two leading figures

When I contact Ismail, who was elected as president only this year, he bullishly refuses to put meat on the bones of the feud.

Speaking from his farm in Perthshire, he does, however, reveal that m’learned friends have now been instructed. He explains that he cannot comment for legal reasons.

Turner also remains schtum, pointing to a terse statement from the society, which says only: ‘It is with great regret that the Aberdeen-Angus Cattle Society announces the resignation of David Ismail as president. We wish him well going forward.’ 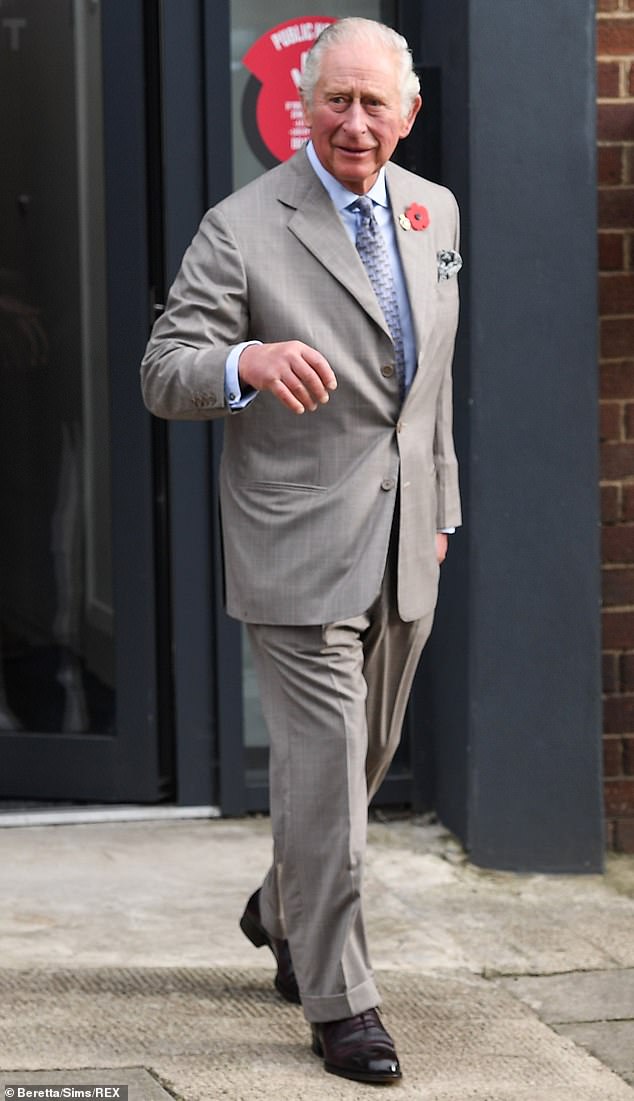 Charles, who has worked hard to promote Aberdeen-Angus cattle, will be dismayed to hear that the society’s president, David Ismail, has abruptly quit after locking horns with a fellow cattle farmer

It’s not the first time the society has been involved in controversy. Three years ago, it was rocked by the resignation of several board members and the departure of chief executive Johnny Mackey. It also had to deal with a police investigation into financial matters.

Six months after Turner’s appointment in 2018, he claimed: ‘The ship is steadying and the waters are calming.’ The Queen Mother was credited with making Aberdeen-Angus the top breed it is today after introducing a prize-winning herd to the Castle of Mey, her private castle. She became joint patron of the society with her husband George VI in 1937 and remained as patron until her death in 2002.

Since then, her grandson, Charles, has taken up the mantle: he has a successful herd of his own at Highgrove and brought Aberdeen-Angus beef to the shelves of Sainsbury’s in 2019.

Escaping to the country for good, Kate? 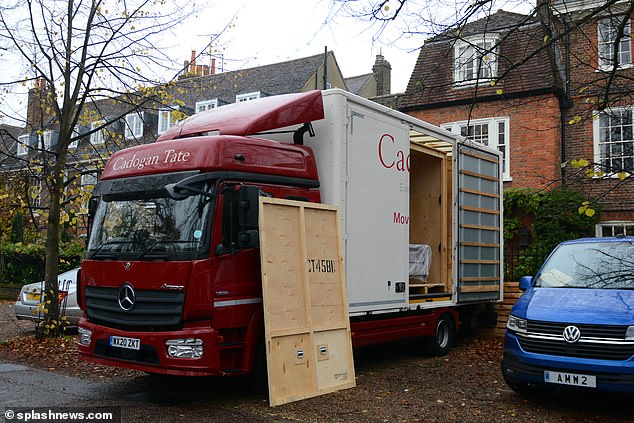 Does this spell the end of an era for London’s party scene? A removals lorry has been spotted for two days in a row outside Kate Moss’s house in North London suggesting the reformed hedonist is quitting city life.

The supermodel, 47, who has lived for a decade in the house once owned by poet Samuel Taylor Coleridge, also has a cottage in the Cotswolds, where she spent most of her time during the pandemic with daughter Lila, 19, and boyfriend Count Nikolai von Bismarck, 34.

Removals men were seen carrying a vast number of possessions from Moss’s house, including artworks and a large box reading ‘Handle with care: clothes and dream catcher’.

‘Kate doesn’t need to be in London as much, as she doesn’t party like she used to,’ says a friend. ‘She loves her home in the Cotswolds — that’s where she can really relax.’ 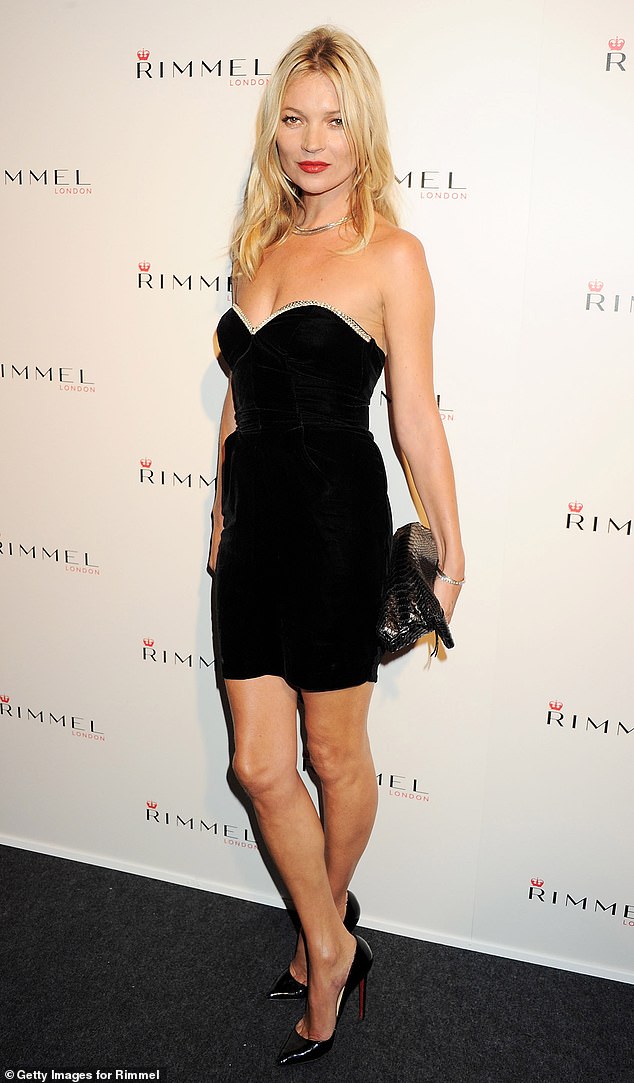 The supermodel, 47, who has lived for a decade in the house once owned by poet Samuel Taylor Coleridge, also has a cottage in the Cotswolds, where she spent most of her time during the pandemic with daughter Lila, 19, and boyfriend Count Nikolai von Bismarck, 34

She was a childhood playmate and lady-in-waiting to Princess Margaret who wrote a best-selling memoir about her ‘extraordinary life in the shadow of the Crown’. Yet Anne Glenconner, widow of Colin Tennant, 3rd Baron Glenconner, still has an occasional breach of etiquette.

She’s revealed she attended the memorial service at Norwich Cathedral in September for a close friend, believed to be the Queen’s cousin Lady (Mary) Colman.

Anne says: ‘I was asked by the Duchess of Cornwall to represent her. And the Household sent a note saying the family don’t want you to wear black. This lovely lady who died had admired once my jacket, so I thought: ‘Well I’ll wear the bright silk green jacket.’ ‘

Speaking on Susannah Constantine’s podcast My Wardrobe Malfunction, she adds: ‘When I arrived, there were quite a few members of the Royal Family there.

‘To my absolute horror, they were all in navy blue or grey. And I stood out, like an awful sort of huge pea.’ 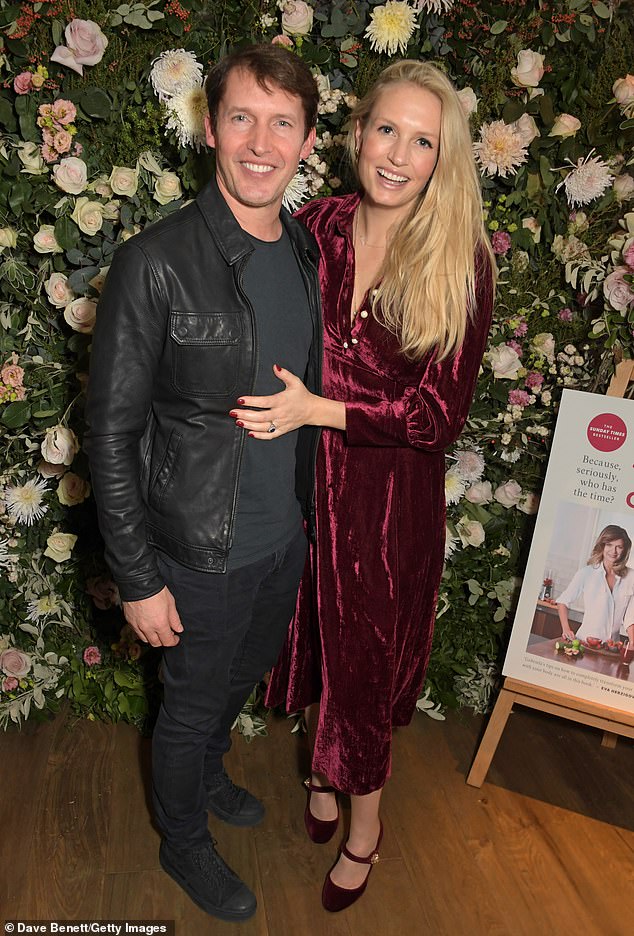 Christmas seems to have come early for James Blunt. I spotted the You’re Beautiful singer at a party in Knightsbridge this week with his wife, lawyer Sofia Wellesley, looking particularly happy.

Sofia, 38, granddaughter of the 8th Duke of Wellington, was noticeably svelte after being heavily pregnant just three months ago.

Blunt’s agent declined to comment yesterday. The singer, 47, who already has two sons with Sofia, is famously discreet, saying: ‘I keep my private life private.’

Una Stubbs, who joined Cliff Richard in Summer Holiday, has made sure her threee sons can afford expensive trips abroad.

The much-loved actress, who died in August aged 84, left £1.2 million in her will.

Newly published documents reveal her son, Joe Henson, has won a limited grant of probate allowing her London flat to be sold.

Stubbs, who also starred in Sherlock and Worzel Gummidge, was married twice.

Tatler named her one of the ‘new generation of It Girls’ but Lady Camilla Beresford, 26, wants to prove she’s more than just a pretty face.

The daughter of the Marquess of Waterford, whose 2,500-acre Curraghmore Estate is the largest in private hands in Ireland, has become an ambassador for the new Tony Hudgell Foundation.

The Duchess of Cambridge wrote an open letter last year praising seven-year-old Tony for raising £1 million by walking 10km with prosthetic legs. His legs were amputated in 2017 after he suffered abuse from his biological parents.

‘Her letter was amazing,’ Lady Camilla tells me. ‘I’m planning the charity’s ball next year. We’d love the Duchess to come as Tony would be so happy to see her.’

I can reveal scriptwriter Jimmy McGovern has become the first winner of the Kevin Pakenham Prize.

McGovern’s BBC1 drama Time, which starred Sean Bean, has ‘given so many people such an accurate and disturbing picture of what life in our prisons is really like and why we should care about what happens there’. McGovern says: ‘I am absolutely thrilled.’

The gong will be given annually by the prison education charity, The Longford Trust, which was set up by Kevin in his father’s memory.

Outspoken historian Dr David Starkey was ‘cancelled’ after making racist remarks last year, but he’s determined not to be forgotten.

The Tudors expert, 76, who was stripped of lucrative book deals and top academic posts after his comments, is trying to relaunch himself as a YouTube star.

From the comfort of his Georgian home in Kent, he has set up his own channel, David Starkey Talks, which attracted more than 24,000 subscribers in just seven days.

He says: ‘I’ve spent months converting my library here into a mini studio.’