Elle King called her mother the ‘best doula ever’ while sharing a photo of her cooking the country singer’s placenta.

The Ex’s And Oh’s singer praised her mother London in the heartfelt ‘appreciation post’ shared on Monday, calling her the ‘best mom’ and ‘best friend.’ 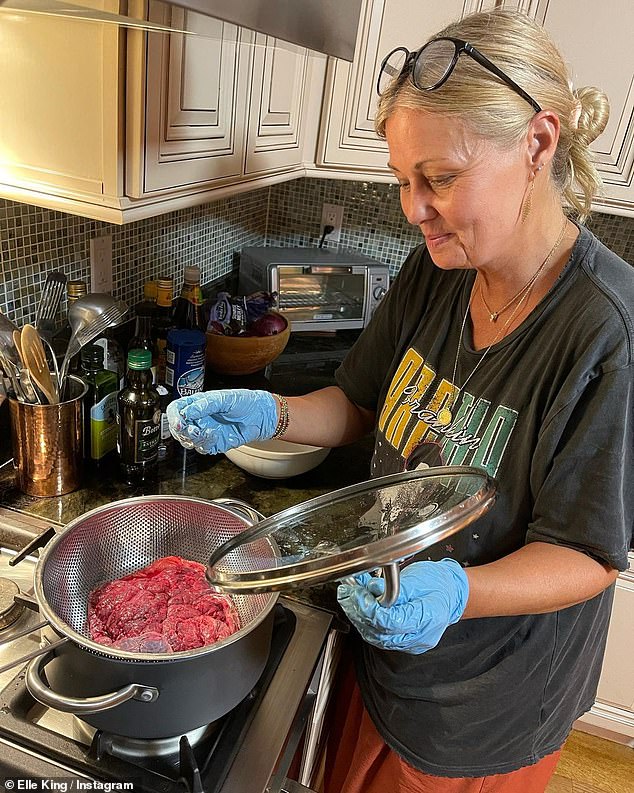 Super mom! Elle King praised her mother London as the ‘best doula ever’ while sharing a shot of her cooking her daughter’s placenta, just several days after welcoming son Lucky

Elle offered an unedited look at post-partum life with the snapshot, which showed new grandma London, 50, braising a bloody piece of her daughter’s placenta.

King would later go on to talk about the ‘amazing benefits’ of the practice.

‘Appreciation post! My mother, the angel of all angels is the best doula ever!’ cooed the singer in her caption.

‘Will get into my birth story when I’m ready…but this person is my best friend.’

‘She helped us get the whole house ready and even though Lucky ended up a belly birth, she was my doula through the whole process, and most importantly she was the best mom I could ask for.

‘She is seen here cooking my placenta to encapsulate it for all the amazing benefits! I love you @pushlovedoula ! We couldn’t have done this without you!’ 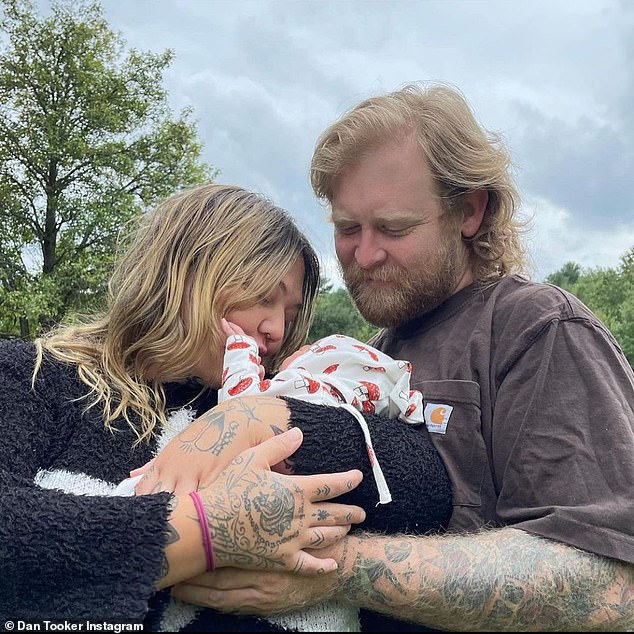 Happy parents: Elle and fiancé Dan Tooker announced that their newborn son’s name is Lucky Levi on Sunday, five days after his birth 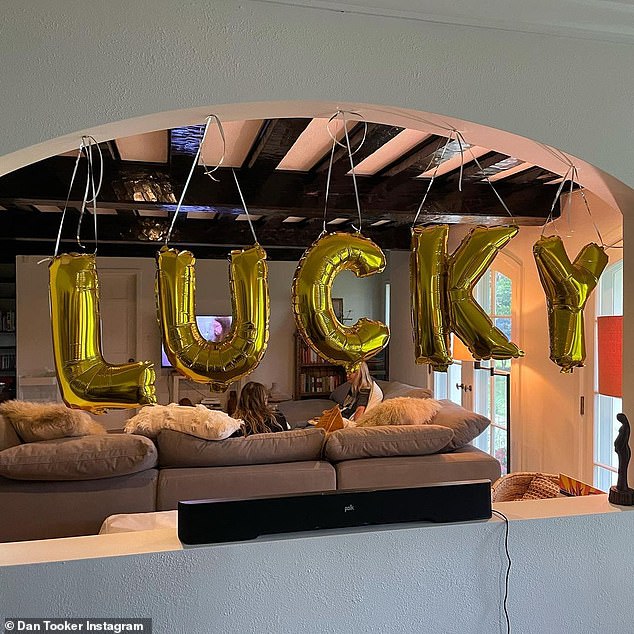 Feeling lucky! The tattoo artist also shared a shot of a balloon arrangement that spelled out his son’s name that had been set up for them

While Elle is close to her mom, she has a strained relationship with her biological father, who is comedian Rob Schneider.

‘On Wednesday, September 1st at 12:06 pm, we welcomed 8 lbs 1 oz of absolute joy and love earthside. We are all healthy and feeling so blessed! Welcome to the world Lucky!’

He wrote: ‘Mom and baby are healthy and I couldn’t be more proud of, and in love with, both of you @elleking. I am the most grateful man in the world. I can’t wait to teach you everything I know Lucky! P.S. Moms rule the world!’

The tattoo artist also shared a shot of a balloon arrangement that spelled out his son’s name that had been set up for them. 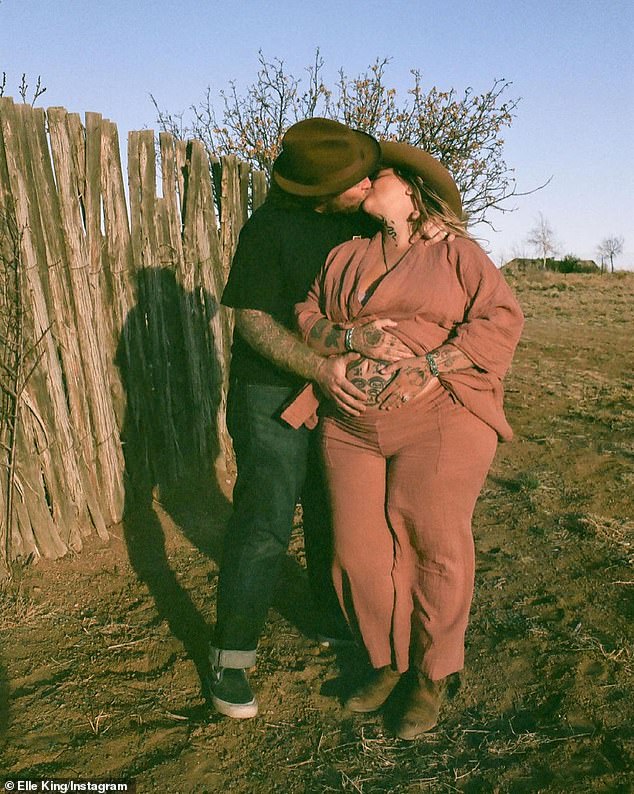 Baby on board: Back in March, Elle revealed she was expected in a set of photos with Dan featuring sonogram images of their child. ‘Well, we did something! Me and @tattooker made a little human!’ she gushed

Back in March, Elle revealed she was expected in a set of photos with Dan featuring sonogram images of their child.

‘Well, we did something! Me and @tattooker made a little human!’ she gushed in her caption.

It was difficult for the country singer to be so open about her good news, as she had already had a bumpy road to a successful pregnancy.

‘This news comes with a great deal of fear, and I hope that all mothers-to-be, in whatever sense that may be, know that I am trying to be very sensitive,’ she explained. ‘You see, this miracle baby comes after two very big losses. It’s a terrifying and extremely painful experience for everyone.’

She also recounted how  ‘every pregnancy announcement felt like a dagger to me,’ because of her fertility issues. 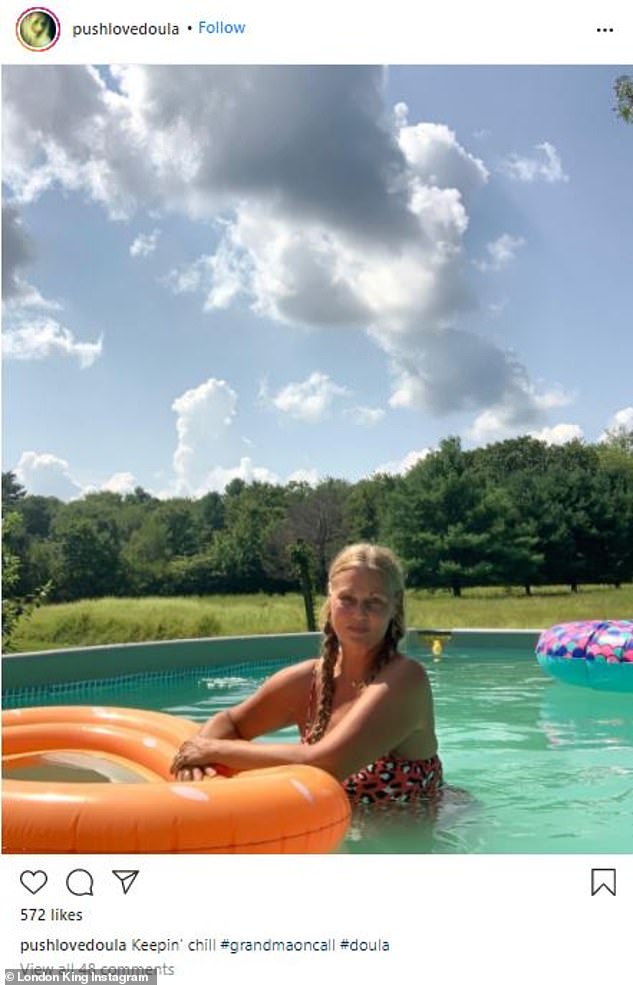 Family affair: Elle’s former model mother London King appeared to have served as Elle’s doula after posting that she was a ‘#grandmaoncall’ last week

She concluded by offering her support to other women struggling to become pregnant.

The lovebirds had dated for about a year before they got engaged in October of last year.

They made it clear they were meant for each other when it turned out they both planned to propose to the other person at the same time.

‘We rode horses up a mountain to go gold panning. I had a ring in my pocket and I was going to toss it in the gold pan and propose to @tattooker … but of course, my soulmate beat me to the punch and proposed to me the exact same way,’ the songstress wrote on Instagram.

‘So I immediately got down on my knee too. I love you, Daniel. One year down, forever to go. I said Yes by the way and so did he!’ 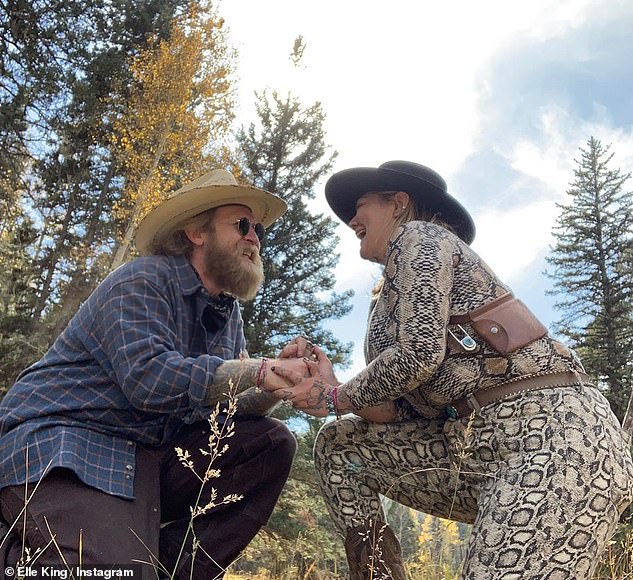 Meant to be: The two got engaged in October after a year of dating. They got a surprise when both planned to propose on the same day