She considers her co-star Kyle Richards ‘two-faced’ and spoke behind the scenes about being abandoned by her friends on The Real Housewives Of Beverly Hills.

Yet Erika Jayne was able to muster a winning smile during last week’s reunion episode as she embraced Kyle.

The 50-year-old singer was pictured next to her former friend as the RHOBH cast posed for a photo. 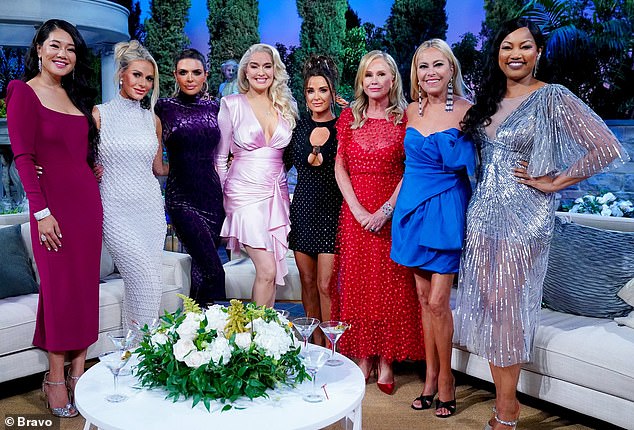 Moving on? Erika Jayne, 50, appeared to have put her differences with Kyle Richards, 52, aside at last week’s Real Housewives Of Beverly Hills Reunion, as she grinned widely and embraced her former friend

Even though she’s been dealing with her ongoing embezzlement scandal, Erika appeared to be the most upbeat member of the cast as they assembled around the reunion set.

She glowed in a luminous pale pink dress with a ruched midriff and a plunging neckline highlighting her cleavage.

She and Kyle appeared to both have their arms wrapped around each other as they posed.

The 52-year-old Halloween actress looked more reserved in a black minidress covered in glittering studs with a cutout over her chest. 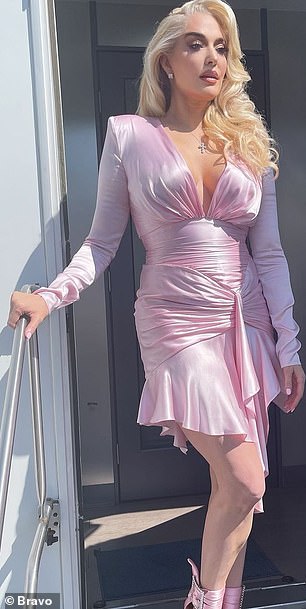 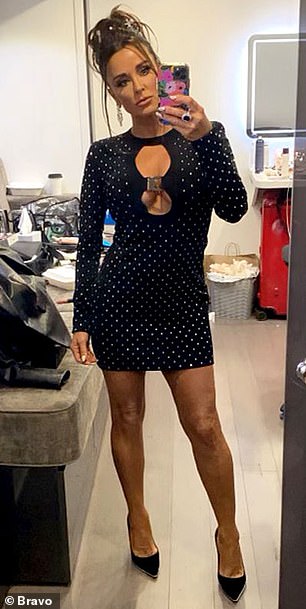 Getting close: Erika glowed in a luminous pale pink dress with a ruched midriff and a plunging neckline. She had her arm wrapped around Kyle, who wore a black studded minidress

Erika may have been able to temporarily put their differences aside, but Kyle flashed a much more muted smile.

Viewers won’t get to see what went down between the two until the episode airs on October 6.

Last week, a close friend of Erika’s revealed exclusively to DailyMail.com that she had given up on Kyle and thought Lisa Rinna was her only true friend left on The Real Housewives of Beverly Hills.

‘The other women say one thing to her face and something completely different behind her back. Lisa actually has her back,’ they claimed.

‘Erika is also disappointed and shocked with how Kyle Richards has turned on her and now realizes the warning Lisa Vanderpump gave her about Kyle was true. Erika knows that Kyle has two faces both literally and figuratively.’ 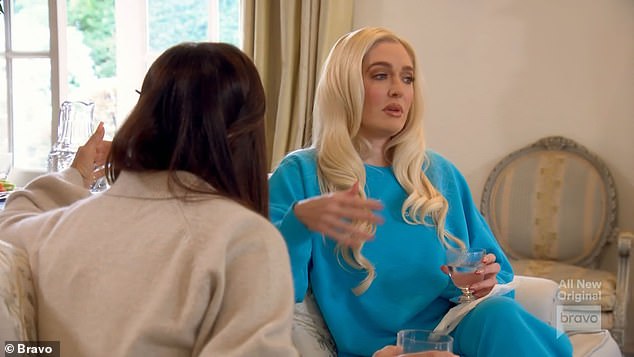 Broken relationship: Last week, a close friend to Erika said she had described Kyle as ‘two-faced’ 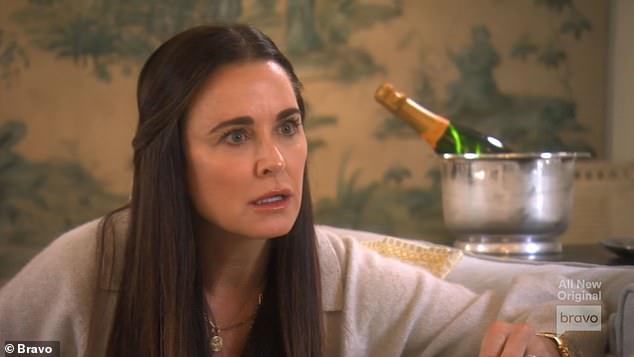 ‘Unbelievable’: The actress had trouble believing a story Erika told her about her husband Tom Girardi, 82, being attacked by a burglar before her got into a rollover car accident

The latest split between Erika and Kyle was detailed in Wednesday’s RHOBH episode.

Kyle did little to hide her disbelief after the singer shared a story about accidents that befell Tom and her son.

‘Tom’s house was broken into and he confronted the burglar and then had to have eye surgery, and then my son had to go over and help,’ Erika explained in a one-on-one with Kyle.

‘And then my son, he rolled his car over five times on the way home. Yeah, I’m under a lot of stress.’

Kyle wondered why her costar hadn’t mentioned the events previously if they were so dramatic.

In a confessional, she said the story was ‘unbelievable,’ adding, ‘There seems to be a pattern. We’ll spend time with Erika and then find out later there was this big situation in her life going on that she didn’t share with us. When Erika withholds information, she just makes it hard to be able to support her.’ 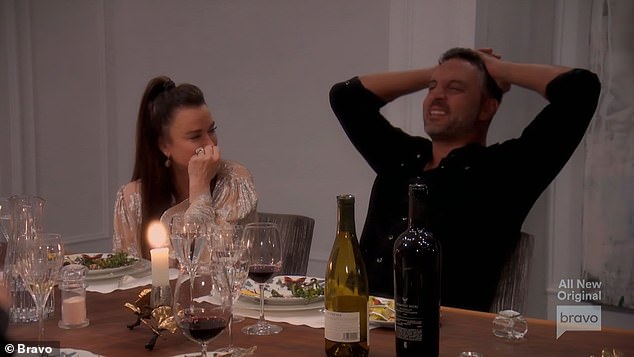 Sharing: Later, Kyle shared the story at a dinner party with Dorit Kemsley, who agreed that it was ‘bonkers’ 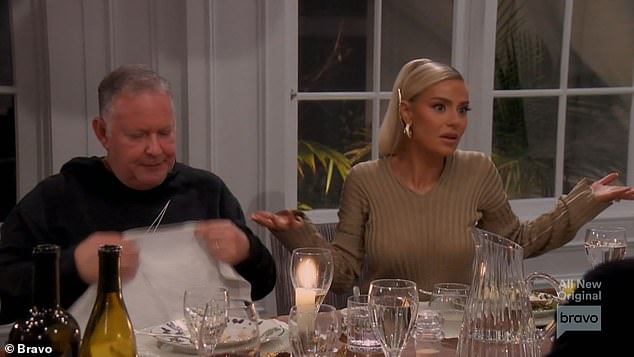 Holding their tongues: However, neither woman would go as far as saying they didn’t believe it 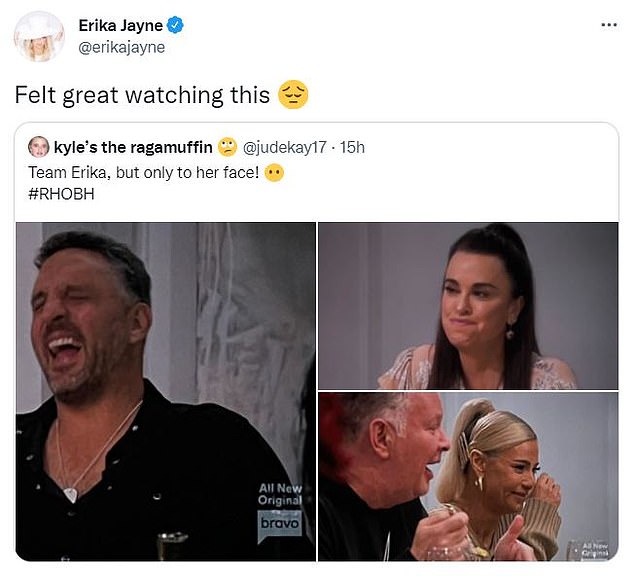 ‘Felt great watching this’: The exchange seems to have deepened the rift between Erika and Kyle, as she posted about it on Twitter after viewing the episode

She wondered aloud about details of the home invasion and car crash that Erika didn’t bother to provide.

Later, Kyle shared the story at a dinner party with Dorit Kemsley, who agreed that it was ‘bonkers,’ though neither was willing to say categorically that they thought Erika had made it up.

The exchange seems to have deepened the rift between Erika and Kyle, as she posted about it on Twitter after viewing the episode.

‘Felt great watching this,’ she wrote while reposting photos of the dinner party guests at their least photogenic. 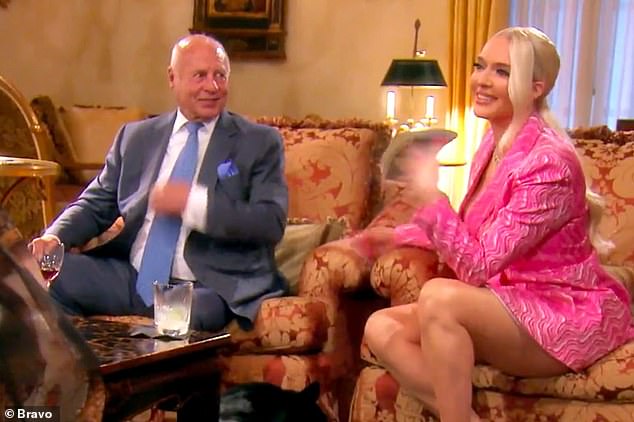 Separating: In November, she filed for divorce from Girardi, but the two were sued by the family of victims of the Lion Air Flight 610 crash, who accused them of embezzling funs intended for the families; still from RHOBH

In November, Erika filed for divorce from her husband Tom, but shortly afterward the two were sued by the family of victims of the Lion Air Flight 610 crash, who accused them of embezzling funs intended for the families.

The lawsuit alleged that their divorce was merely a ‘sham’ to help protect their assets.

Last month, the trustee handling the bankruptcy case for Girardi’s law firm sued Jayne for $25 million, claiming that she had spent around that amount in funds given to her by her husband from the firm’s coffers.

‘She attempts to create a distinction between handing her money directly versus paying all of her bills directly,’ the suit said, according to Page Six. ‘The distinction, like her prior motion for reconsideration, is meritless. Any payments made for her benefit are her responsibility.’

The trustee also claimed that she had feigned ‘willful blindness’ and was aware of where the money came from.

Jayne’s attorneys downplayed the accusations in a statement to the publication.

‘Unfortunately, the amended complaint is another example of the trustee and her counsel jumping to conclusions without a full investigation, and bullying and blaming Erika for actions taken by Girardi Keese for which Erika does not have legal liability,’ they said, claiming that the trustee was ‘overreaching.’

‘Erika will defend the case, and we will seek sanctions and all appropriate remedies for the claims brought in bad faith and without any legal merit.’ 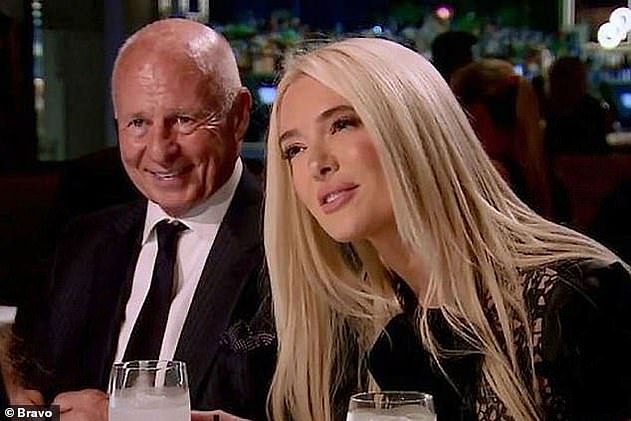 It gets worse: She was also sued for $25 million from the trustee overseeing Girardi’s law firm’s bankruptcy, who claimed that she used that much in funds stolen from the firm; still from RHOBH

DailyMail.com exclusively revealed that Girardi had taken up residence in a senior living home in Burbank, California, last month amid reports he had been diagnosed with dementia and late-onset Alzheimer’s disease earlier this year.

The Belmont Village Senior Living facility in Southern California costs more than $5,000 per month for a private suite and boasts chef-prepared dining with 24 daily choices of meals and staff that are on duty at all hours of the day.

‘I think what has happened to Tom here is that he’s not mentally capable, and he’s in sole control of his firm,’ she said. ‘And I think that it got away from him. I think that we’re dealing with a man who is [at a] diminished capacity in control, and not doing the right thing. Because if he stole the money, I’d like to know where it is. You know, that’s the truth.’