Princess Eugenie, 31, went to the Askew Ward at Hammersmith and Fulham Hospital’s Mental Health Unit in London on Monday morning to see the work carried out by the Hospital Rooms charity. Her appearance may be a nod to the Sussexes, her cousin Prince Harry and Meghan Markle, who have focused much of their recent work on ending the stigma around mental health.

In an Instagram post, Eugenie said that, by bringing art into hospital spaces, Hospital Rooms provides “some much-needed light in a dark moment”.

She wrote: “The charity works with artists who visit hospital wards to paint artworks on the walls, meet the service users and ultimately leave behind something positive for those struggling with mental health issues.”

Mental health has become an increasingly important topic within the Royal Family, particularly so since Harry and Meghan’s bombshell interview with Oprah Winfrey, which aired on CBS on March 7.

The tell-all conversation with the American talk show host followed the couple’s decision to step back as senior royals and move to California to lead an independent life, away from the spotlight. 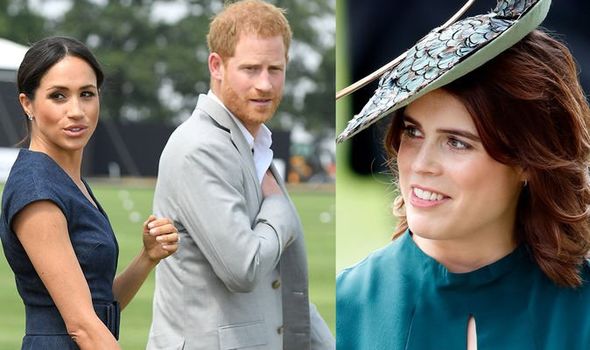 Princess Eugenie and Harry’s relationship has survived the struggles with the rest of the family (Image: Getty)

One of the most shocking declarations of the two-hour interview was Meghan’s suicidal thoughts. “I just didn’t want to be alive anymore,” she said. “And that was a very clear and real and frightening constant thought.”

She spoke about feeling vilified by the press and unsupported by the Royal Family. Her mental health struggles, Meghan said, were ignored even though she shared them explicitly.

Mental health is a topic close to Harry’s heart too. In a 2017 The Telegraph podcast episode, he opened up about being “very close to total breakdown on numerous occasions”, which he attributed to “all sorts of grief and lies and misconceptions”.

Later, in 2019, he and Oprah announced the documentary The Me You Can’t See, where the two discuss “mental health and emotional well-being while opening up about their own mental health journeys and struggles”. It aired on Apple TV+ in May.

Mental health, Harry confessed, played a fundamental part in his wish to redefine his role within the Royal Family.

Eugenie’s support for the charity’s mental health work could be a nod to Harry and Meghan (Image: Princess Eugenie/Instagram)

Seeing Eugenie getting involved will please the Sussexes’ loyal fans, who are believed to worry about how the couple’s rifts with the rest of the family could be affecting them.

Harry’s relationship with brother William, 39, isn’t as solid as it once was, meaning Princess Eugenie’s support could be much appreciated – now more than ever before.

The two have been close since they were children.

Their mothers, the late Princess Diana and Sarah Ferguson, 62, were close friends – so much that they even went on holiday together, taking, of course, their children. Those times are said to have set the root of their bond.

When they grew older, Harry and Eugenie hit the club scene together, becoming regulars at some of London’s most well-known clubs.

The cousins’ bond dates back to their teenage days, with the two sharing similar struggles (Image: Getty)

In Finding Freedom, the biography written by Omid Scobie and Carolyn Durand, the authors say: “Like Harry, Eugenie also struggled to carve out her own identity growing up.

“Not being in a senior role meant that she had to go out into the world and find her own path, which she has done.

“Harry had always confided in his cousin when it came to the women in his life.

“Not only did he trust her implicitly, but friends say that she gives great advice and has always been ‘beyond wise’ for her years.”

The princess was reportedly one of the first royals to be informed when Harry and Meghan first started dating in the summer of 2016, and when the news emerged in the press, she and now-husband Jack Brooksbank were with them in Canada.

Even after Meghan and Harry’s departure, Eugenie has shown her affection for the couple. When their second baby, Lilibet, was born in June, Eugenie congratulated her “dear cousins”, writing in an Instagram story: “We couldn’t be happier for you all.”

The Queen gifted the property, which sits on the grounds of Windsor Castle, to the Duke and Duchess of Sussex as a wedding present before they tied the knot in May of 2018.

When Harry visited the UK last April to attend the funeral of his grandfather, Prince Philip, he stayed there with his cousin and her family. When he had to self-isolate ahead of the unveiling of the Diana statue, Eugenie hosted him too.

The Sussexes’ move to the US and tensions between them and the Firm does not seem to have affected Harry and Eugenie’s bond – her engagement with a mental health charity serving as proof, once again, of their shared interests.