An ‘astonishing’ find: Folded iron sword discovered in a Roman soldier’s grave in Greece was part of a pagan ritual, expert says

By Jonathan Chadwick For Mailonline

An iron sword deliberately bent as part of a pagan ritual has been discovered in a Roman soldier’s grave in Greece, an archaeologist has revealed.

The deformed or ‘folded’ sword was buried with an as yet unidentified soldier about 1,600 years ago in the Greek city of Thessaloniki.

His ‘arch-shaped’ grave was found in the underground remains of a basilica – a large public building and place of worship – dating from the fifth century AD.

Along with the sword, the man was found buried with a spearhead and a ‘shield-boss’ – the circular centre of a shield.

The sword (pictured) was deliberately bent in some form of pagan ritual, according to a Greek archaeologist 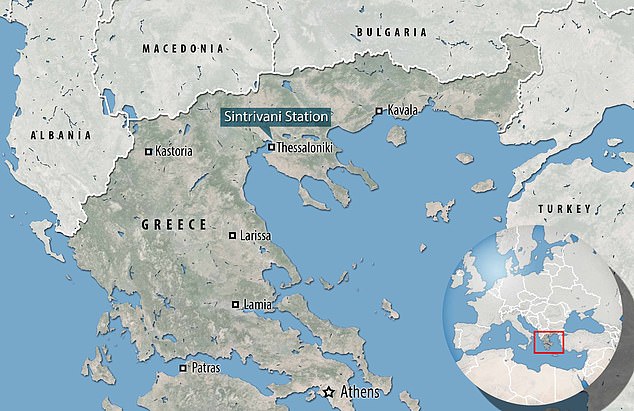 The soldier’s grave was found in Thessaloniki, Greece during excavation work for a subway line

The ‘astonishing’ findings have been shared by Errikos Maniotis, an archaeologist at Aristotle University of Thessaloniki in Greece, who believes the man likely served in the Roman imperial army.

‘Usually, these types of swords were used by the auxiliary cavalry forces of the Roman army,’ Maniotis told Live Science.

‘Thus, we may say that the deceased, taking also into consideration the importance of the burial location, was a high-ranking officer of the Roman army.

It’s rare to find a ‘folded’ sword in an urban landscape, let alone in this part of Europe, Maniotis pointed out. 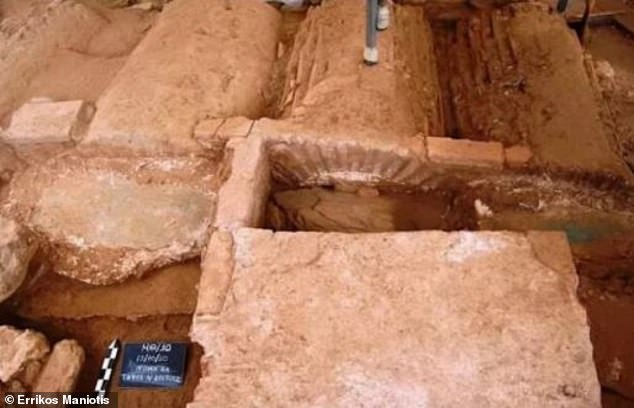 ‘Folded swords are usually excavated in sites in Northern Europe,’ he said.

‘It seems that Romans didn’t practise it, let alone when the new religion, Christianity, dominated, due to the fact that this ritual [was] considered to be pagan.’

Archaeologists are yet to assess the remains of the soldier, described as likely a ‘Romanized Goth or from any other Germanic tribe who served as a mercenary’.

‘We don’t know anything about his profile – age of death, cause of death, possible wounds that he might have from the wars he fought,’ Maniotis said.

The soldier’s grave was one of seven found in the basilica, but not all of them were found containing artefacts. 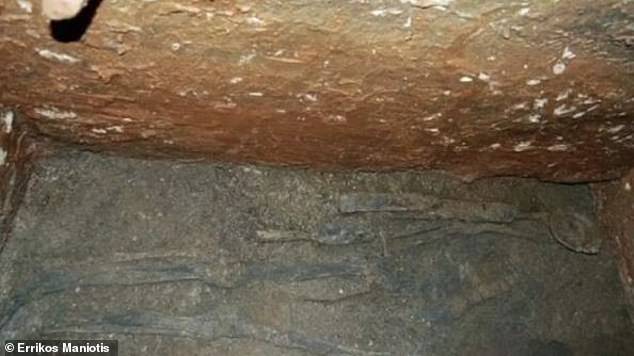 Along with the sword, the man was found buried with a spearhead and a ‘shield-boss’ – the circular centre of a shield 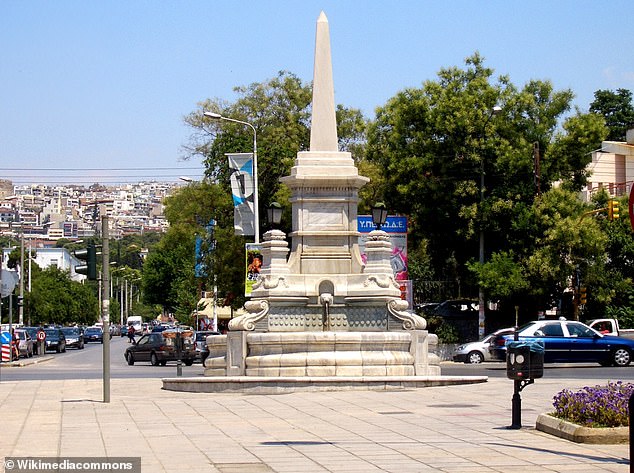 Researchers have called it the ‘Sintrivani basilica’ after the upcoming station, which itself is named after an Ottoman fountain near the entrance (pictured)

According to Live Science, the basilica was discovered in 2010 during an excavation in preparation for construction of a new subway line – the Sintrivani station, which is due to enter service in 2023.

Researchers have called it the ‘Sintrivani basilica’ after the station, which itself is named after an Ottoman fountain near the entrance.

Allegedly, the basilica was built over a fourth-century chapel, which might be the oldest Christian church in Thessaloniki, according to Maniotis.

The church was damaged in the seventh century and abandoned in the eighth or ninth century, he added.

Archaeologists have also excavated the basilica’s ‘beautiful’ mosaic floor, which ‘shows a vine with birds on its stalks’, including a mythical phoenix with a halo.

Paganism has its roots in the pre-Christian religions of Europe.

Pagans understand deity to be manifest within nature and recognise divinity as taking many forms, finding expression in goddesses as well as gods.

Goddess worship is central in paganism. Pagans believe that nature is sacred and that the natural cycles of birth, growth and death observed in the world around us carry profoundly spiritual meanings.

Human beings are seen as part of nature, along with other animals, trees, stones, plants and everything else of this earth.

Most pagans believe in some form of reincarnation, viewing death as a transition within a continuing process of existence.

Pagans accept death as a natural part of life and will wish to know when they are dying so that they may consciously prepare for it.