An 82-year-old playing Hamlet? A role traditionally taken by someone at least half a century his junior?! His mother Gertrude played by a woman 20 years younger than him?

It was surely going to need an actor with the super powers of Magneto from the X-Men and the magic touch of Gandalf from The Lord Of The Rings to pull off such an audacious enterprise.

Luckily, in Sir Ian McKellen, Windsor’s Theatre Royal has both.

We’ve all become used to colour and gender-blind casting in theatre. No one cares any more about your sex or skin colour. But Sean Mathias’s production goes one leap further, with an even more radical idea. ‘Age-blind’ casting.

It rocks everything we assume about ourselves. And it does take a bit of getting used to, in a production for which Mathias has rearranged the text, cutting an hour off Shakespeare’s longest play so that it runs at a mere two hours 50 minutes (including an interval).

Not that McKellen needs a breather. He’s the sort of octogenarian we all aspire to be. 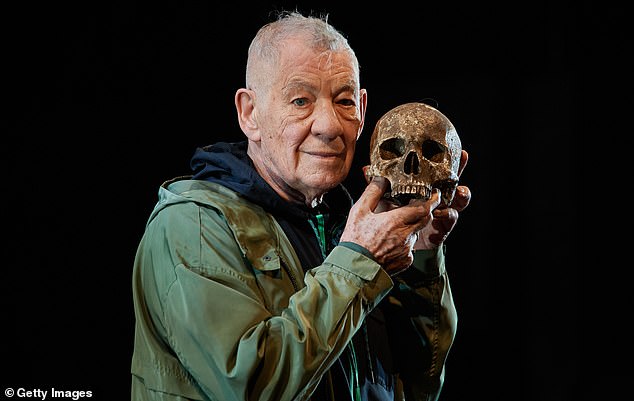 Jaunty of limb yet antique of voice, there is a playfulness about his pensionable Dane. He seems as intoxicated as he is intoxicating.

Not only does he have the stamina to dart up the stairs on the gantry set (with some members of the audience seated below on stage). He also finds the energy for a fencing match with his deadly rival Laertes at the end. And this, in a packed theatre on a sweltering night by the Thames.

Once you suspend your disbelief, it is a fascinating new perspective on the Prince of Denmark. The wobbly jowled, old-school, Gielgudian delivery; the tobacco-y Lancashire accent with its sibilant whistle is very familiar. And Mc-Kellen speaks the Bard’s iambic pentameter as easily as Gordon Ramsay curses.

But there’s something really interesting going on here. It’s as though his Hamlet is haunted by the shadow of senility, as much as he is by his mission to kill the usurping king who murdered his father and married his mother.

His famous soliloquies are invested not just with virtuoso technique (‘and yet to me what is this quintessence of dus-T,’ he spits), but also the wisdom of his age.

In the most famous speech of all – ‘to be or not to be’ – Hamlet is often deemed lost and perplexed. 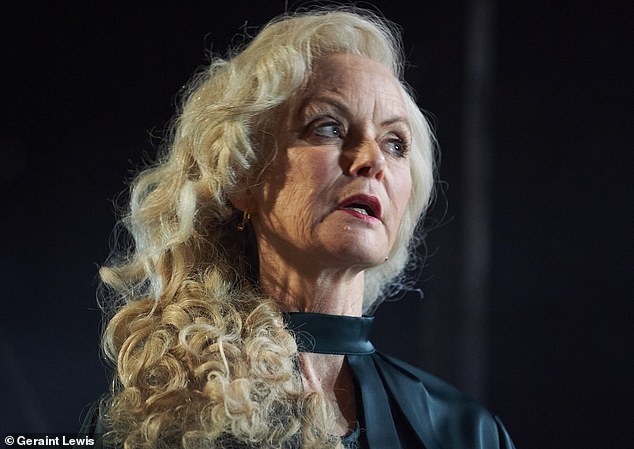 Jenny Seagrove as Gertrude. She, too, brings a steely intensity, as if trying to suppress her guilt at betraying her son and former husband

Yet McKellen makes him sadder and more resigned, bringing an overwhelming melancholy and pathos. It’s as though Shakespeare’s other great character, King Lear (who McKellen has played twice in the past 14 years), is having a bad night in Bedlam, dreaming of his lost youth.

Yet much as Sir Ian bestrides the stage like a colossus, this isn’t a one man show. The always terrific Frances Barber has stepped into the role of the wittering courtier and patriarch Polonius after Steven Berkoff pulled out.

Officially that was because of a scheduling clash. But there were rumours of other clashes, too – strenuously denied by director Mathias – with Emmanuella Cole, who had been playing Polonius’s son Laertes, and who has also left the company. Ashley D Gayle makes a robust replacement.

Barber is an actor capable of chewing even more scenery with histrionics than Berkoff, but here she offers a subtle mix of pomposity and tenderness. Her Polonius is a revelation. 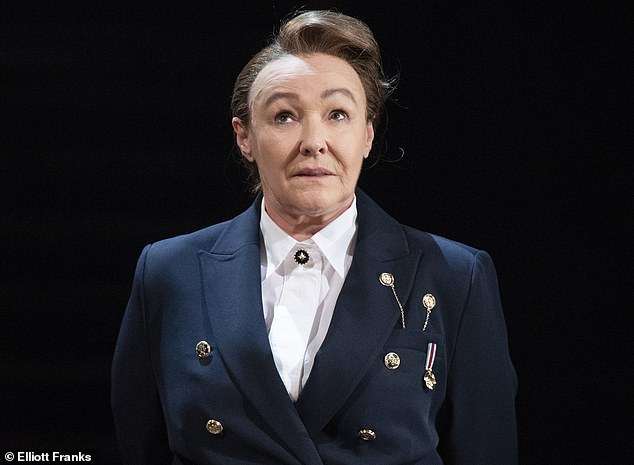 A revelation: Frances Barber as Polonius. Barber is an actor capable of chewing even more scenery with histrionics than Berkoff, but here she offers a subtle mix of pomposity and tenderness

Francesca Annis (who starred as Juliet opposite McKellen’s Romeo in 1976) plays a chilling ghost who sounds as if she’s speaking from the bottom of a well.

And there’s a rock-chick Ophelia to remember in Alis Wyn Davies, who goes properly off the rails, howling head-banging versions of Shakespeare’s songs.

My only uncertainty was Jenny Seagrove adopting what sounded like a German accent for Hamlet’s mother.

But she, too, brings a steely intensity, as if trying to suppress her guilt at betraying her son and former husband.

You may see more polished productions than this – it can be rough and thespy around the edges. But it is unmistakably an event. I doubt we will see its like again.