It was just 11 days ago when Ryan Reynolds seemingly reignited his faux feud with Hugh Jackman and wished him a happy 53rd birthday by ribbing the Aussie star about celebrating his birthday without him.

With their feud now 13 years in the making, The Greatest Showman star decided to return the favor, and rally some friends and colleagues to wish Reynolds a happy 45th birthday on Saturday, October 23.

In the clip, crew members took turns telling Reynolds ‘happy birthday’ as the photographer moved from one room to the next, ultimately finding Jackman sitting down getting his hair and makeup styled for a photoshoot. 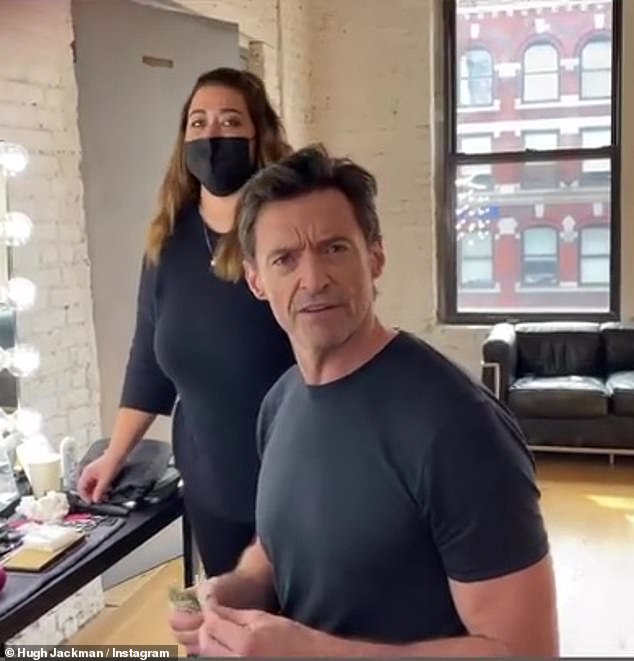 Give and take: Hugh Jackman, 53,  returned the favor to Ryan Reynolds and reluctantly wished him happy birthday on Saturday, in what’s the latest ribbing in their longstanding faux feud 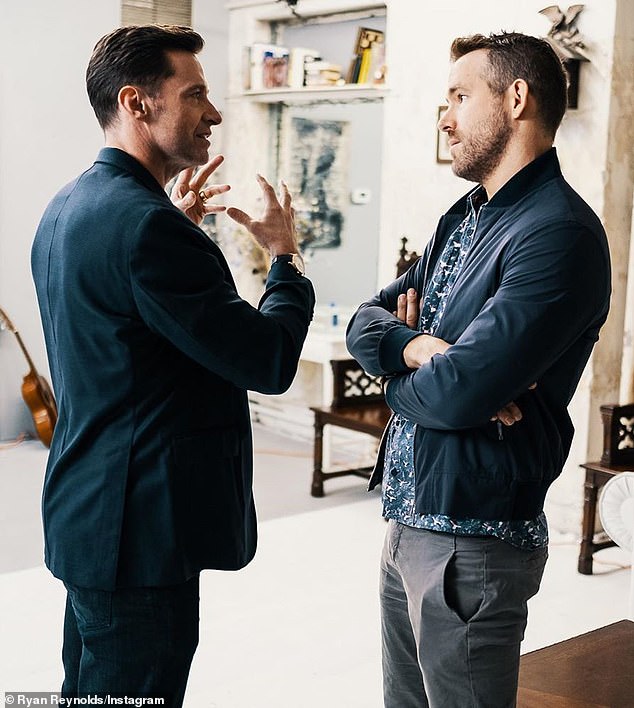 13 years and counting! The funny feud between Jackman and Reynolds dates back to 2008, when they met on the set of of X-Men Origins: Wolverine

From the top, the camera operator zig-zagged around the rooms and captured nine people who offered a ‘happy birthday Ryan.’

There was even one guy who changed things up with a ‘happy birthday Blake, ‘ in a reference to Reynolds’ wife, Blake Lively.

Finally, after the makeup artist said her ‘happy birthday Ryan’, Jackman could only muster a sigh when he attempted to say the sweet sentiment himself. 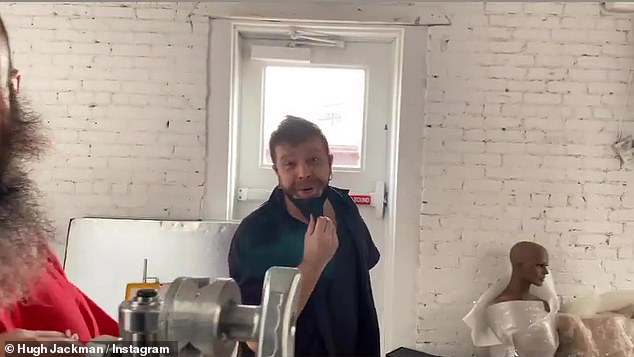 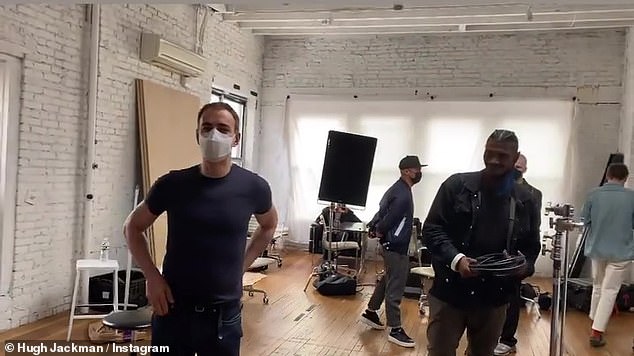 Workin’ it: Each and every one of them kept in character for the funny video 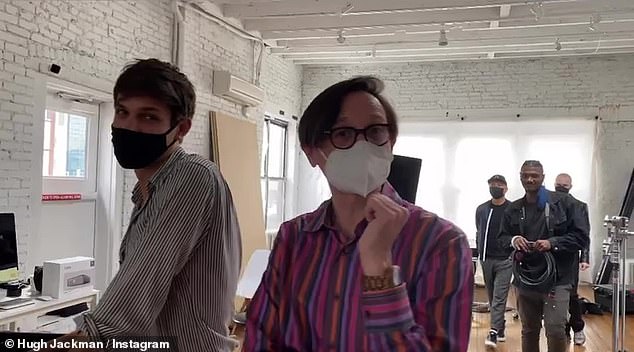 Making the rounds: The camera operator zig-zagged around a few rooms, and each time that person offered: ‘Happy birthday Ryan’ 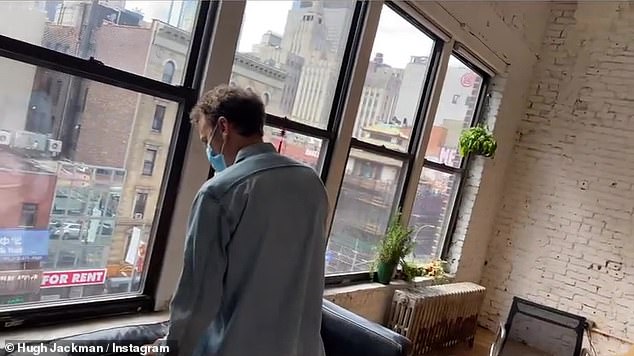 Big Apple: The funny clip appears to have been shot in a New York City loft 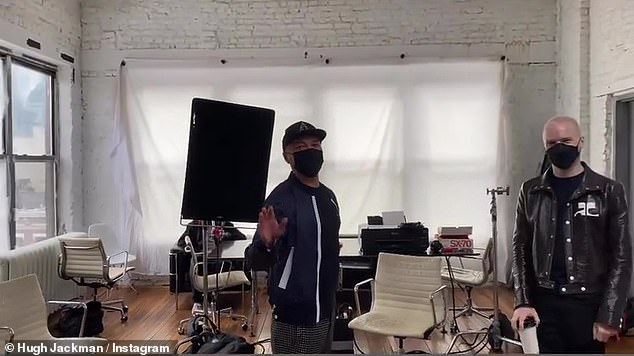 Workin’ the rooms: In all, the photographer had nine people wish Reynolds ‘happy birthday’, and a tenth person who jokingly directed his birthday wish to Reynolds’ wife Blake Lively

‘It’s not easy… Happy birthday, Ryan,’ he said while looking straight into the camera.

‘There you go, we got it! How many people did we get? People say I don’t like you, but that was 15 people.’

Jackman then pulled out a nice bundle of cash and began counting it, as if to signify that he had to pay his colleagues for wishing Reynolds happy birthday on camera.

The Aussie star first paid his makeup stylist her fee, and then handed over the rest of wad of money to the camera operator, which he said was for ‘the rest of you.’

‘They say I don’t love you,’ the actor said of Reynolds, just as he made the final payment. 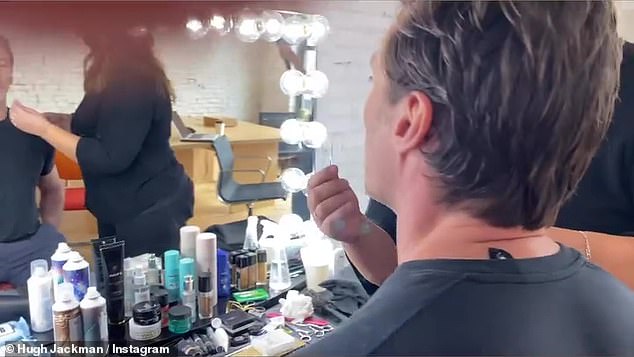 Leading man: Eventually, the photographer found Jackman getting the leading man treatment, all while sitting down and getting his hair and makeup done for a photoshoot 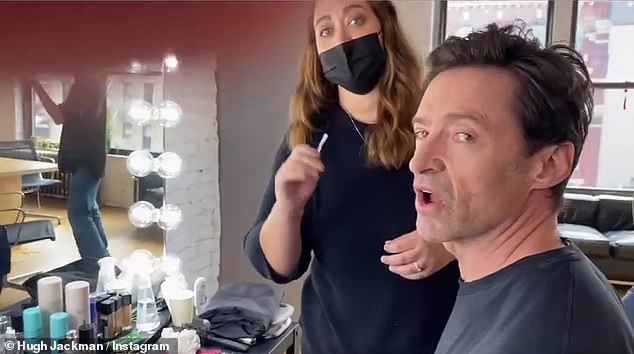 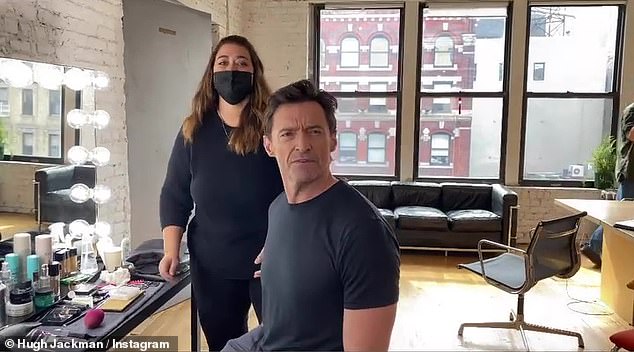 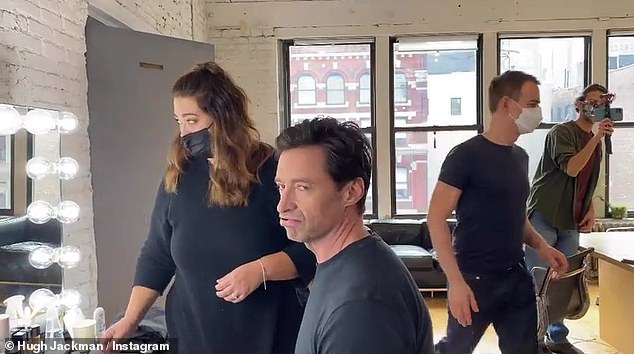 Sigh of disgust: Initially, Jackman could only muster a sigh when he tried to share his happy birthday wish to the Deadpool star 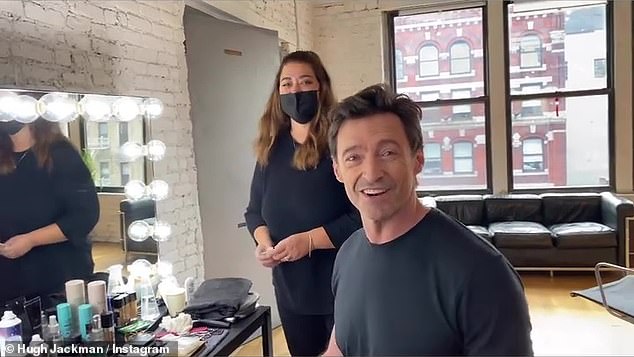 Finally: His frown and snarls turned to a beaming smile when The Greatest Showman star finally offered the sweet sentiment to Reynolds

In Reynolds’ birthday post to Jackman on October 12, the Deadpool star did his best not to break character and start laughing.

‘Hey Hugh, I just want to wish you a happy birthday and tell you I love you. I’m down here in Atlanta so wish I could be celebrating with you,’ he began.

‘You may notice it’s a little quiet around the house this morning, that’s because I flew Deb, the kids, the dogs, your friends and furniture here to celebrate your birthday with me,’ he continued, in a reference to his wife of 25 years, Deborra-Lee Furness, and their two children Oscar, 21, and Ava, 16.

He ended the clip by professing: ‘We’re having an amazing time and we miss you.’ 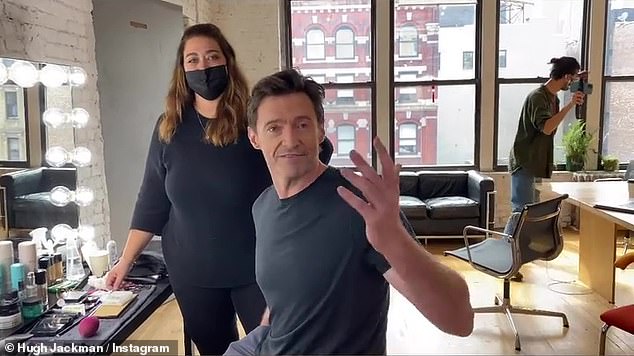 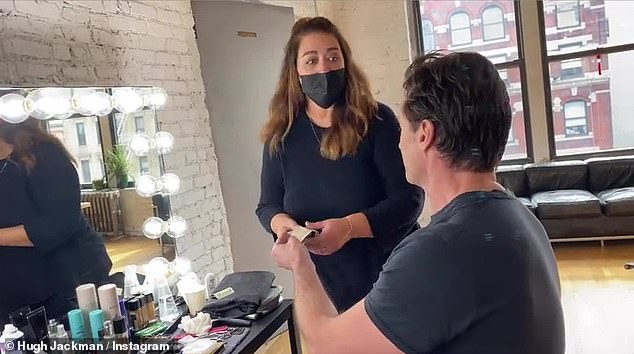 Jackman then pulled out a nice bundle of cash and began counting it, as if to signify that he had to pay his colleagues for wishing Reynolds happy birthday on camera 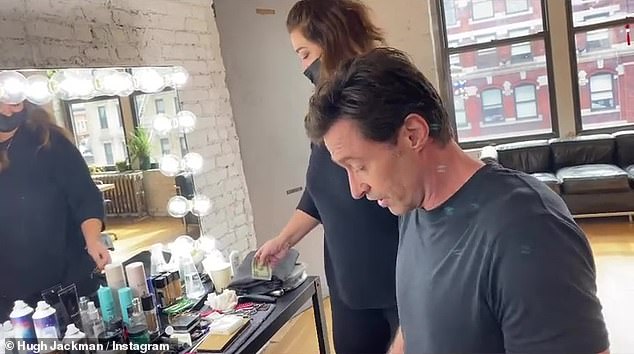 Paid off: The actor then counted up the remaining money to give to the crew 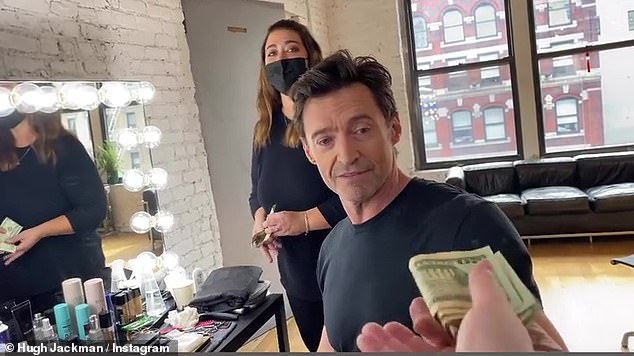 Paid off: ‘They say I don’t love you,’ Jackman added, just as he made the final payment to the photographer

The fictitious feud started back when the two stars met on the set of X-Men Origins: Wolverine in 2008, and they quickly began to rib each other over Reynolds’ then wife, Scarlett Johansson, whom he was married to from 2008 until 2011.

And according to Jackman, he had been ‘close friends with Scarlett’ over the years.

‘Scarlett had just married Ryan,’ Jackson explained to The Daily Beast, adding, ‘So when he came on set I was like, “Hey, you better be on your best behavior here, pal, because I’m watching”, and we started ribbing each other that way.’

Hugh said things ‘escalated’ after Reynolds took on the role of Deadpool, and thus proving to be a rival to his portrayal of Wolverine. 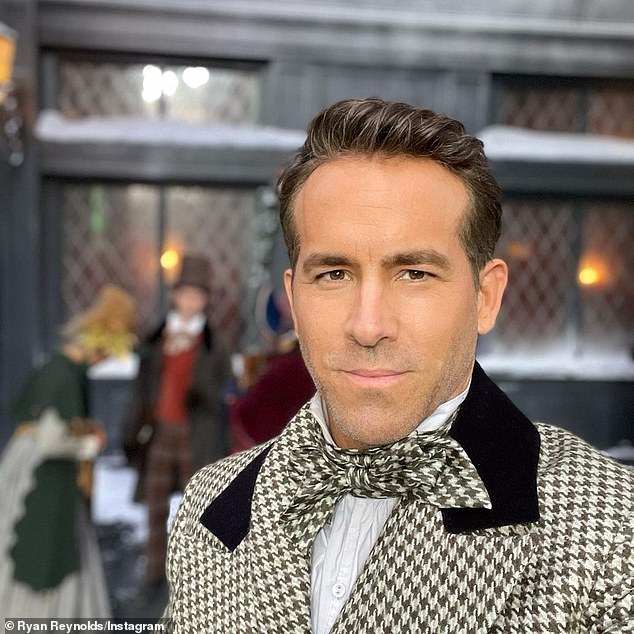 Superhero jabs: Jackman’s birthday message to Reynolds comes just 11 days after the Deadpool star took a jab at the Wolverine actor for his 53rd birthday 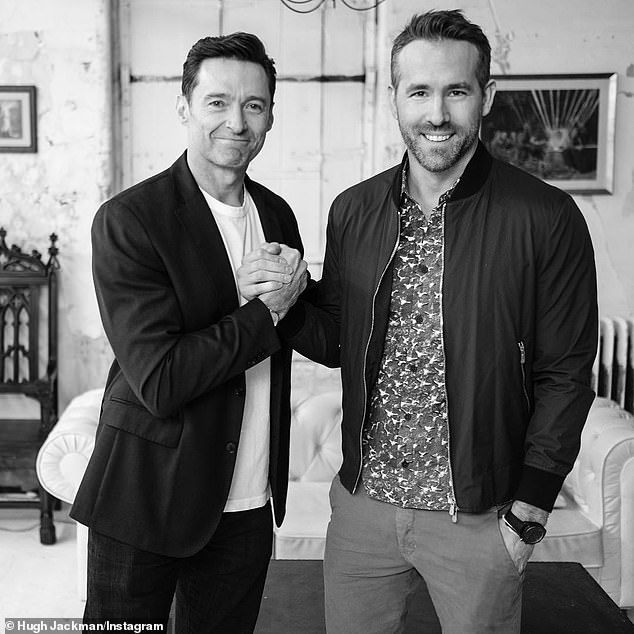 How it all began: The fictitious feud started back when the two stars met on the set of X-Men Origins: Wolverine in 2008, and they quickly began to rib each other over Reynolds’ then wife, Scarlett Johansson, whom he was married to from 2008 until 2011