Researchers from the Northwestern University Feinberg School of Medicine in Chicago, Illinois, found that opioid deaths in their state jumped 50 percent in the first half of 2020 when compared to the previous year.

From January to June of 2020, which includes the first wave of the pandemic, 11.1 out of every 100,000 residents of the state died of an accidental opioid overdose.

The pandemic proved to be a step backwards in the U.S.’s battle against the opioid epidemic, with a record high of 93,000 people dying of an overdose in America last year. 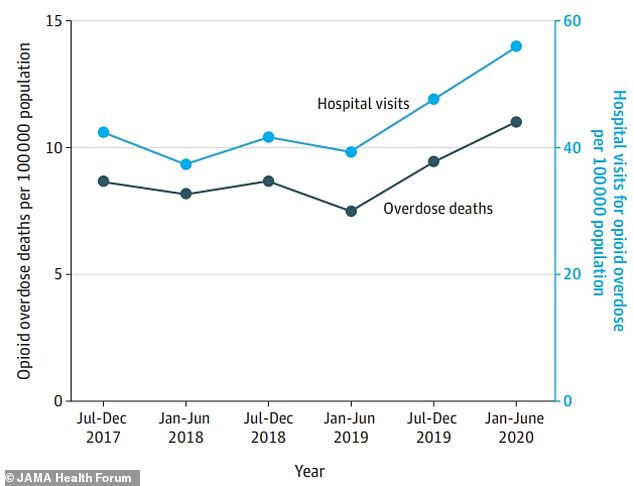 Opioid related overdose deaths in Illinois increased by 48% last year (dark blue line), as the nation took a step backwards in the fight against the opioid epidemic

Researchers, who published their findings Friday in JAMA Health Forum, gathered opioid death data from across the state from July 2017 to June 2020.

The three years’ worth of data was split into individual six-month period and calculated as a rate per every 100,000 residents.

In total, 6,058 people overdosed and died because of opioids during the three month period, or nine out of every 100,000 residents of the state.

The period with the highest rate of opioid deaths was the early pandemic period, where 1,286 deaths were recorded.

Numbers were already trending upwards before the pandemic, though, with 1,128 deaths – or 9.5 out of every 100,000 people – being attributed to opioid overdoses during the period from July to December of 2019.

No previous time period included in the study had a higher death rate.

The first half of 2019 was the the lowest point for opioid deaths during the study period.

It was an 8.5 percent decrease from the 8.2 deaths per 100,000 residents recorded during the first half of the previous year.

The demographics of opioid deaths changed during the pandemic as well, researchers found.

The first half of 2020 was the first time white people accounted for less than 50 percent deaths during the period.

From January to June of last year, 48.5 percent of the deaths were among white people, while black and Hispanic residents made up 48.8 percent of the nearly 1,3000 deaths. 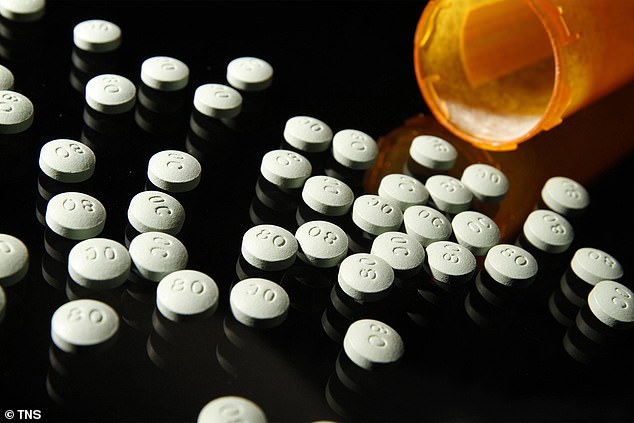 Opioid deaths have long been a problem in America, but 2020 was the worst year of all. More than 93,000 people died of an overdose last year, a record high. Former CDC director Robert Redfield pointed to disruptions in life caused by the pandemic as reason why (file photo)

The data matches trends reported by health officials during the pandemic, that deaths from opioids spiked last year, and that the racial gap in opioid deaths expanded.

‘The disruption to daily life due to the COVID-19 pandemic has hit those with substance use disorder hard,’ said Dr Robert Redfield, former director of the Centers for Disease Control and Prevention.

‘As we continue the fight to end this pandemic, it’s important to not lose sight of different groups being affected in other ways. We need to take care of people suffering from unintended consequences.’

A record 93,331 overdose deaths were recorded nationwide last year, and a majority of the deaths can be tied to the use of opioids.

Black and Hispanic people are disproportionately more likely to die of an opioid overdose than white people, making up less than 35 percent of the U.S. population but more than 40 percent of deaths.

The disparity became even worse during the pandemic last year, with the share of deaths among minorities increasing.