Jennifer Lopez and Ben Affleck were spotted getting ready to begin their 4th of July weekend getaway at a Los Angeles airport on Saturday morning.

The Argo actor, 48, was first seen exiting a vehicle before taking his luggage towards the runway, and the hitmaker, 51, was initially pictured preparing to leave her car before meeting her son Maximilian, aged 13.

The pair’s outing comes just a few months after the Jenny From The Block singer ended her engagement with former professional baseball player Alex Rodriguez. 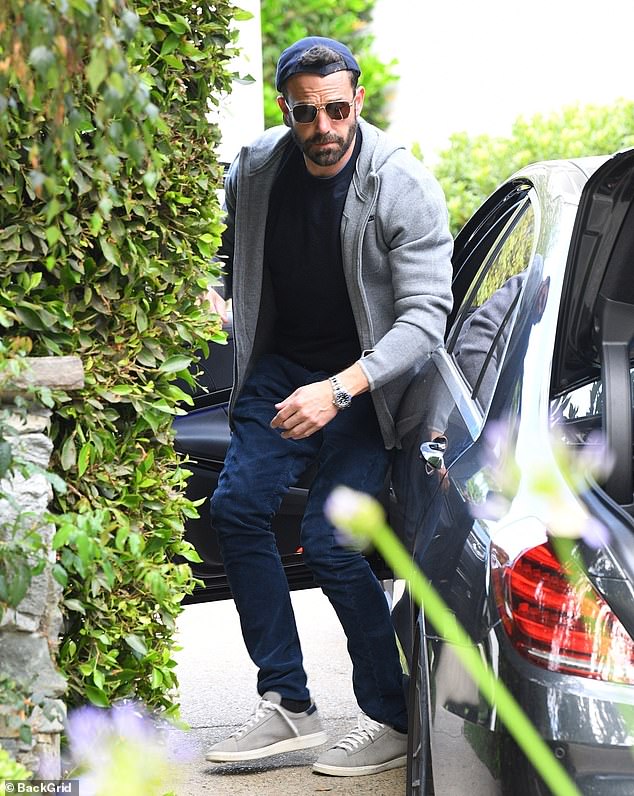 Heading out: Ben Affleck and Jennifer Lopez were spotted arriving at an airport in Los Angeles on Saturday ahead of their 4th of July weekend getaway

Affleck kept it very casual during the event, as he was dressed in a light gray zip-up hoodie worn on top of a black t-shirt, as well as a blue cap.

The Good Will Hunting actor finished off his pared-down clothing ensemble with a pair of form-fitting navy blue trousers and a set of sneakers that nearly matched the color of his outerwear.

Lopez’s beautiful blonde hair remained free-flowing and hung downward onto her shoulders as she prepared to embark on her trip.

The former couple was first romantically connected after they appeared in the critically panned 2001 film Gigli, and they began a relationship the year after the feature’s release. 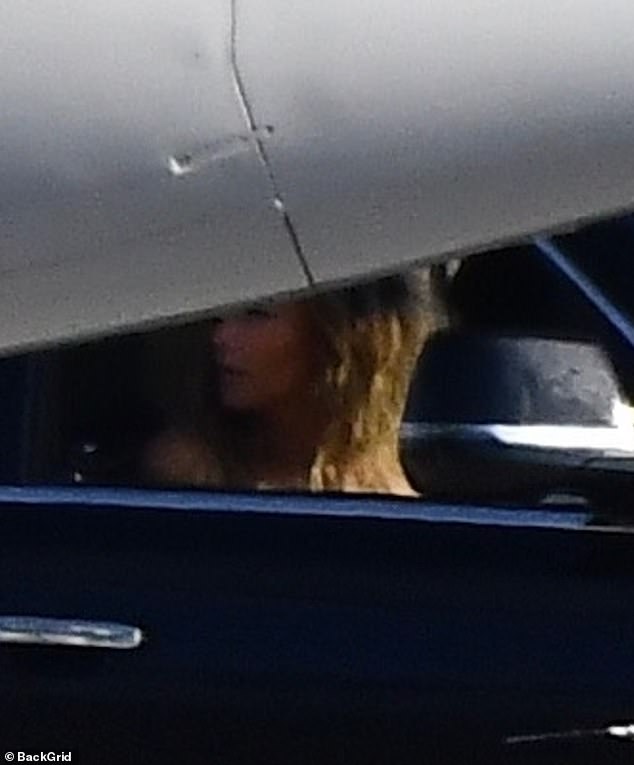 Letting it all hang out: The singer’s gorgeous blonde hair fell onto her shoulders while she prepared to embark on her trip with the director 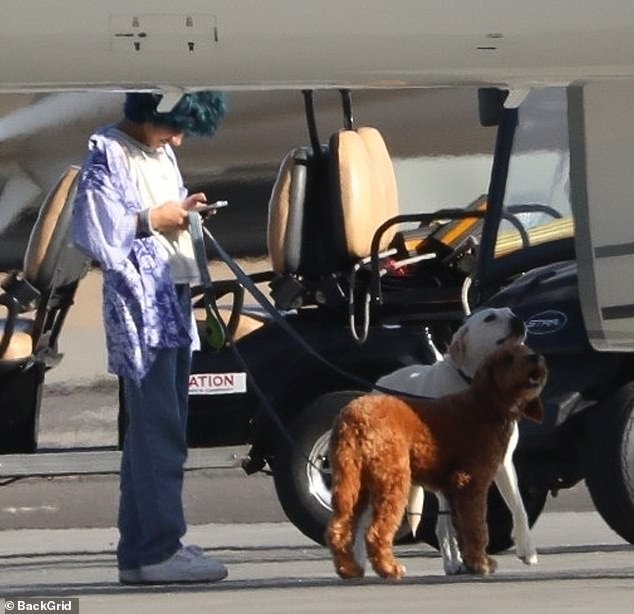 Family affair: Lopez’s son, Maximilian, was also pictured waiting near the runway with a pair of the singer’s dogs

The two previously announced their engagement after several years of dating but called off their planned 2003 wedding days before it was set to occur, with the pair citing intense media pressure as the reason for the delay.

Lopez and Affleck broke off their relationship the following year but remained both on good terms and in contact over the next decade.

The singer went on to marry fellow performer Marc Anthony and welcomed her son and daughter Emme, aged 13, in 2008.

The actor also later tied the knot and welcome daughters Violet and Seraphina, as well as a son named Samuel, aged 15, 11, and nine, with his wife, Jennifer Garner. 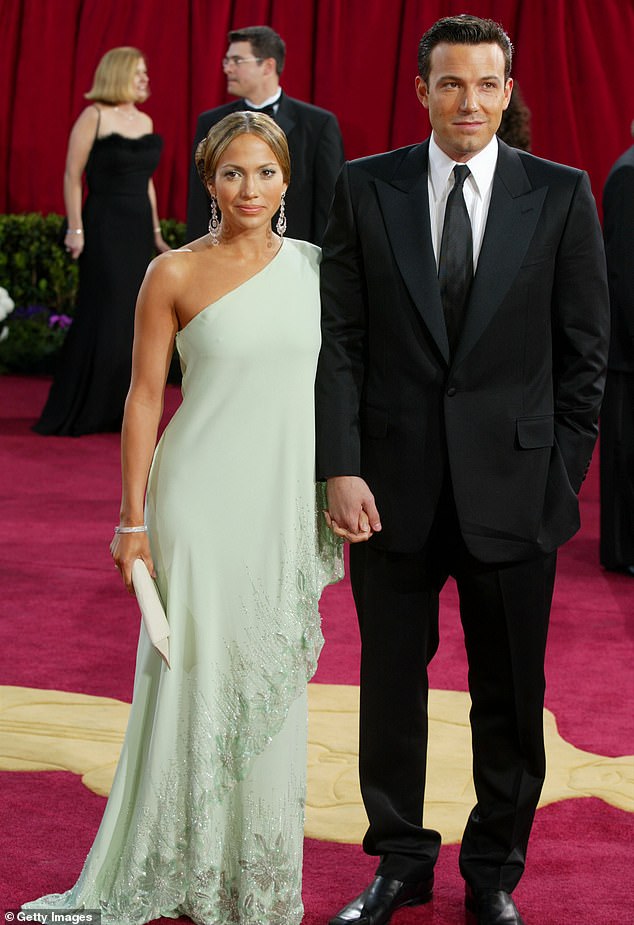 First meeting: The now-rekindled couple initially met on the set of the critically panned 2001 feature Gigli; they are seen at the 75th Annual Academy Awards in 2003

Both marriages ended in divorce, with the songstress’ coming to an end in the summer of 2011, and the director’s in 2018.

Affleck and Lopez recently rekindled their past romance following the latter’s split from her former fiance, from whom she separated this past April due to allegations of cheating on the part of the former athlete.

The two were first linked that same month after the Dogma actor was seen leaving his now-girlfriend’s mansion in Los Angeles, and the two took a trip to Montana the following month, leading many to speculate that they were back together.

Last month, the couple was spotted during a PDA-filled dinner at Nobu in Malibu, where they were seen holding hands and spending time with her children. 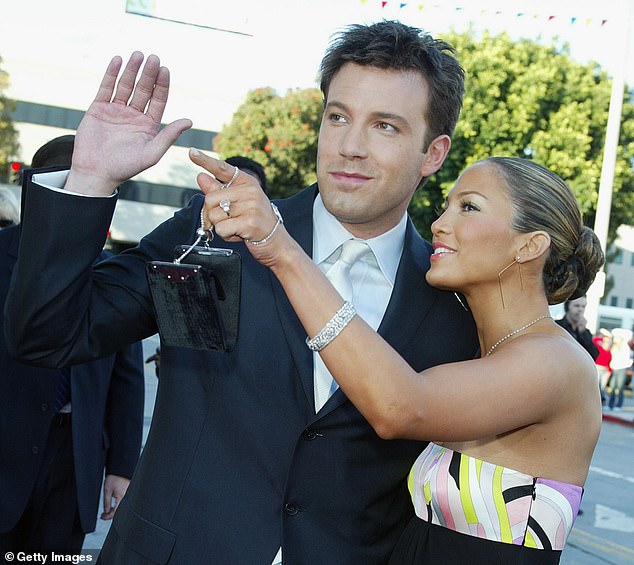 Calling it off: The former couple was set to marry in 2003, although they postponed their planned nuptials due to intense media pressure; they are spotted at that year’s premiere of Daredevil

Moving on: Affleck and Lopez went on to marry, welcome children and get divorced from Marc Anthony and Jennifer Garner, respectively, following their 2004 split; they are seen in 2002

The singer recently appeared on Thursday’s episode of the Sirius XM show Pitbull’s Globalization to speak her mind about her track Cambia El Paso, which has not made its debut as of yet.

During the sit-down, Lopez spoke about the future release’s meaning and noted that she wanted to encourage her fans to take an active role in changing their lives.

Specifically, she pointed out that ‘the song is about change and not being afraid to take the step.’

The On The Floor songwriter expanded further on her initial statement and discussed the intentions she had for her fans in greater detail. 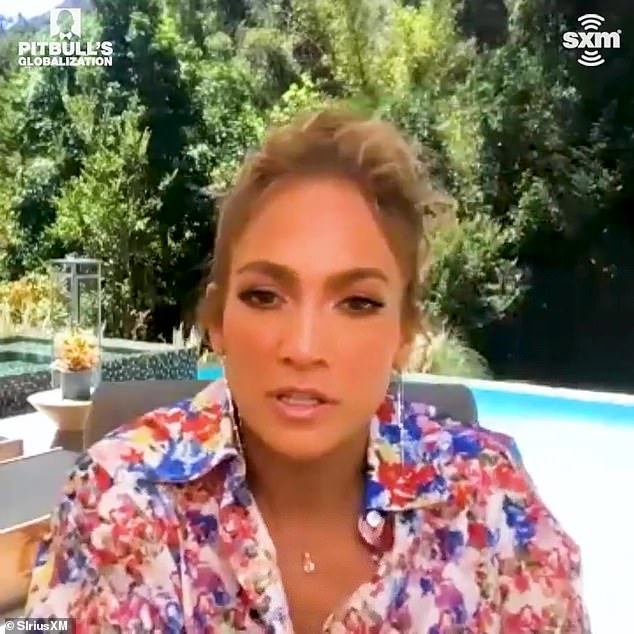 Deeper meaning: Lopez recently spoke about her soon-to-be-released track Cambia El Paso and noted that she track was centered on ‘change and not being afraid to take the step’

‘Like, just take the step, advance, do what you need to do. If something’s not feeling right, whatever it is in your life, like, just make that move and dance,’ she expressed,

The Grammy-winning hitmaker concluded by definitively stating what Cambia El Paso was really about and noted that she wanted her fans to keep a positive state of mind.

Although his former flame appeared to be ready to begin her weekend with Affleck, Rodriguez was seen spending time with his daughters Natasha and Ella, aged 16 and 12, in a series of shots shared to his Instagram account on Friday. 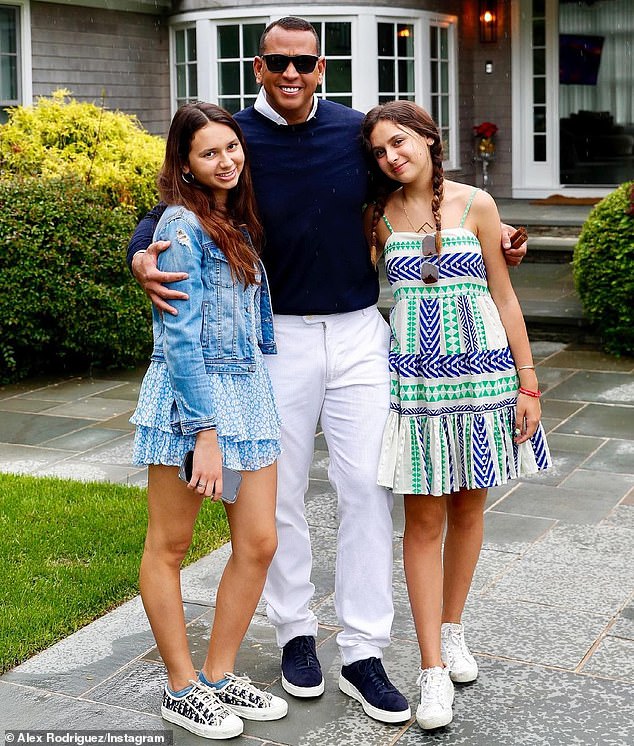 Staying busy: On Friday, Lopez’s former fiance, Alex Rodriguez, shared a few shots with his daughters Natasha and Ella to his Instagram account

The former New York Yankees team member, 45, was first seen holding his daughters close as they posed before embarking on a ‘Friday night date.’

The sports figure kept it toned-down as he enjoyed his time with his kids, as he was dressed in a navy blue sweater worn on top of a white shirt and a matching pair of pants.

He later shared a picture from the inside of a department store, where he was seen waiting outside a pair of dressing rooms that his daughters had previously occupied.

Rodriguez also attached a short text graphic to the photo that read: ‘Personal shopper for the girls on Friday night. Shabbat shoalom [sic].’ 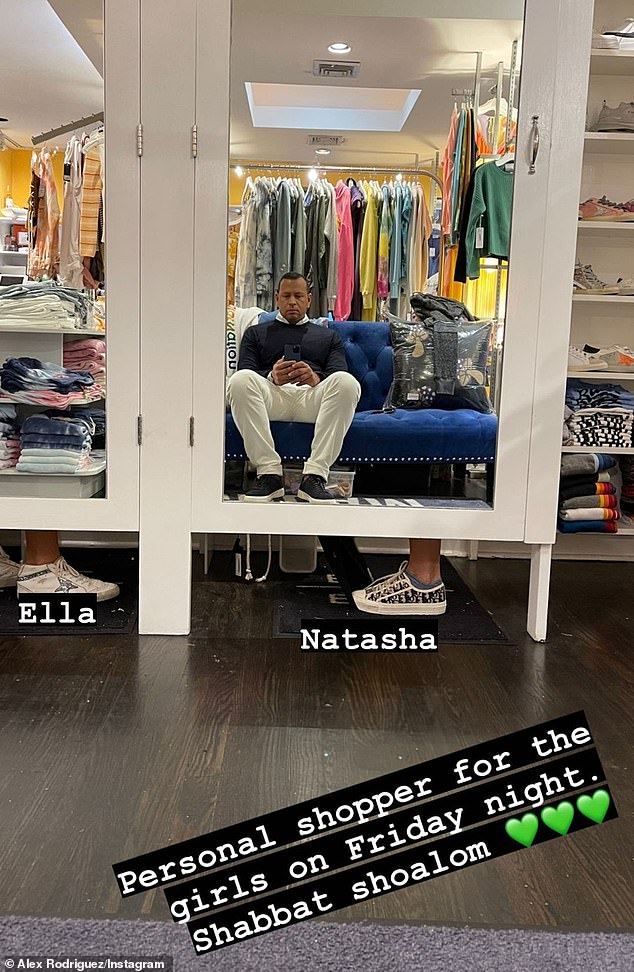 Dad duties: The former professional baseball player wrote that he was acting as a ‘personal shopper for the girls on Friday night’