Kate and William are believed to be enjoying the half-term break with their three children. But, despite the holidays, the Duke and Duchess of Cambridge haven’t forgotten their charity work and commitments.

On Thursday, the couple’s social media account interrupted the Cambridges’ half-term silence to share news of an important initiative launched by Young Minds, a leading mental health charity for youngsters.

Kensington Palace wrote: “Bayo is a brilliant new initiative from The Ubele Initiative and Heads Together partners!

“@MindCharity, @YoungMindsUK and @bestbeginnings are bringing their mental health resources, communities and services for the Black community together in one place.” 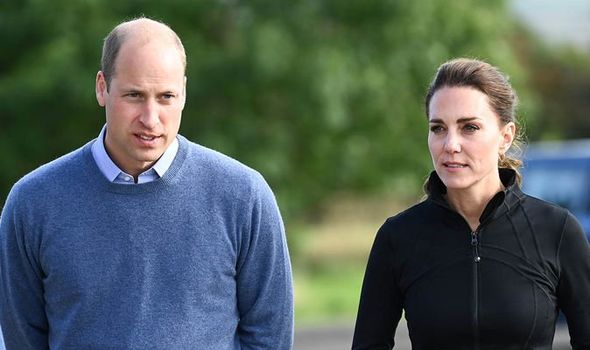 Kate and Prince William are believed to be on holidays (Image: GETTY)

Kate and Prince William with their three children (Image: GETTY)

This news pleased the Cambridges’ fans online, with one, named Judith Ince, writing: “Thank you so much for highlighting this wonderful initiative”.

A third, RubyWaysome, added: “Finally! This is way overdue and much needed!”

And Sapphireblue wrote: “Such an amazing initiative, so glad to see you supporting this”.

Announcing the platform, Young Minds said: “We’re proud to announce the launch of Bayo, a platform providing information about initiatives, communities and mental health services created by and for the Black community – all in one place.

Mind and Young Minds are both charity partners of Heads Together, the initiative launched in 2016 by Kate, William and Prince Harry in collaboration with their Royal Foundation.

Heads Together marked the first major project dedicated to mental health led by the royals. It aims to end stigma and change conversations on mental health.

Kensington Palace’s latest tweet interrupted a social media silence by the Cambridges which commenced on October 19.

Kate with And and Dec last week (Image: GETTY)

Last week, William and Kate were spotted along with Prince George, Princess Charlotte and Prince Louis at Heathrow Airport.

The Duke and Duchess were seen unloading luggage from an Audi parked outside the London airport, while their adorable children were carrying their own backpacks.

This break, likely to end this weekend as the children are due to return to school on November 1, comes after a busy period for the Cambridges.

The line of succession to the throne (Image: EXPRESS)

This glitzy night marked the culmination of the first year of the Duke’s legacy-making initiative, which aims at finding solutions to the environmental issues of our time.

The Duke also attended, alongside Prince Charles and the Queen, the Global Investment Summit reception hosted by Her Majesty on October 19.

There, he met important players in the world’s economy, such as Bill Gates, and government officials including Joe Biden’s climate aide John Kerry.

Similarly, Kate completed a key engagement on the same day, as she attended the launch of the Forward Trust’s Action on Addiction campaign.

At the event, she delivered a keynote speech in which she highlighted the need to be compassionate to people who suffer from addiction.

And she listened to TV presenter Ant McPartlin sharing his own story of addiction and how he overcame it.

Kate and William’s half-term break didn’t just mark the beginning of their holidays but also helped royal watchers quash fears over the Queen’s health – with many expressing on social media their conviction the Cambridges would not leave if the sovereign’s health condition was worrying.