‘You’re sitting on it!’ Kate Garraway and Ben Shephard are left in hysterics as she frantically searches for her phone after her alarm rings TWICE on Good Morning Britain

By Laura Parkin For Mailonline


She’s never been far from an on-screen blunder after missing the show by sleeping in.

And on Friday Kate Garraway, 54, was left in hysterics as she frantically searched for her phone after its alarm rang twice during Good Morning Britain.

Co-host Ben Shephard, 46, blames Kate for interrupting a conversation on the climate crisis, immediately saying: ‘That’s Kate’s phone!’ leaving her to try and find it under her seat. 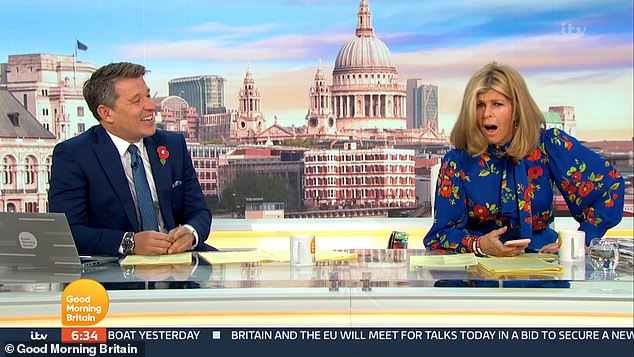 Oh dear! Kate Garraway’s alarm went off twice on Good Morning Britain as she frantically searched for her phone in a hilarious blunder on Friday

Kate dismisses Ben’s claims as before he reminds her that she is actually sitting on her phone, as he reiterates: ‘It is you’re sitting on it.’

She could be seen as she frantically searched for her phone before finding it on the chair underneath her.

The presenter is quick to blame her kids for the ‘really awkward’ blunder as Ben laughed and asked: ‘Is that the alarm to wake you up?’ 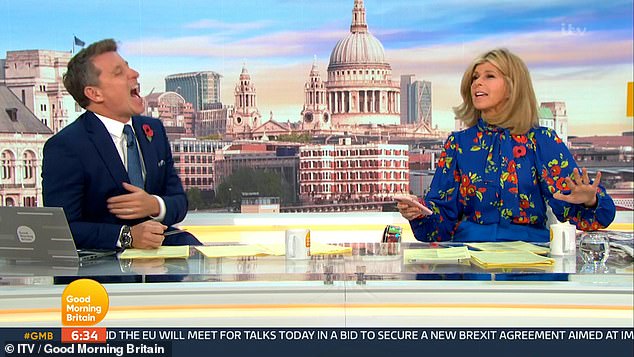 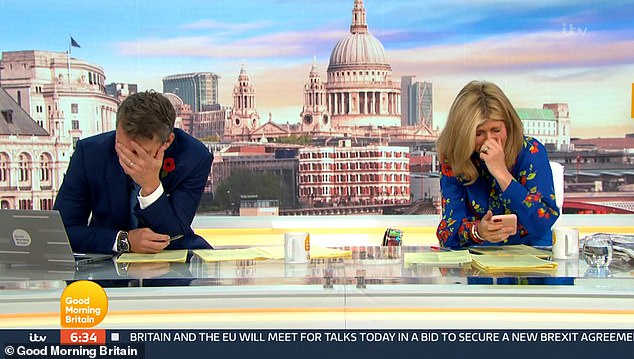 Hilarious: She could be seen frantically searching for her phone before finding it on the chair underneath her, leaving herself and Ben in hysterics

The duo laughed as Kate struggled to turn off the alarm that was set randomly for 6:34AM.

A producer could be seen entering the shot to removes her phone from the television set to prevent a reoccurring incident.

Elsewhere on the show Kate branded a magician ‘incredible’ after he made the corner of the card she had requested disappear, before revealing it could be found enclosed in the pages of the book that had been in front of her the whole time.

Joel Mawhinney, 24, from Belfast, who has over 15.5 million TikTok followers and has received 1 billion views online, left presenters Kate and Ben gob smacked as he demonstrated one of his magic tricks. 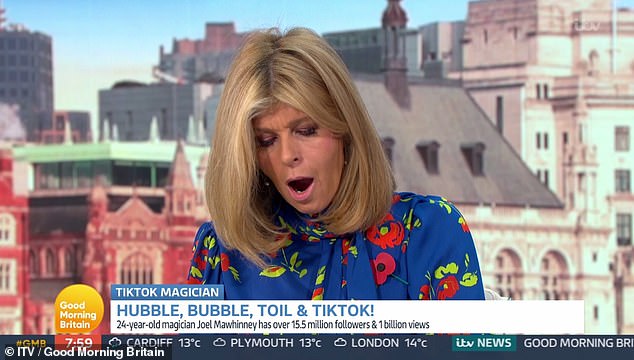 Who is calling me? The duo laughed as Kate struggled to turn off the alarm that was set randomly for 6:34AM

‘We have a deck of cards,’ he explained. ‘They’re different and you’re going to pick one for me Kate. Since you’re so keen, I’ll let you pick two.’

After showing viewers that all of the cards were different, he then asked Kate to say stop wherever she liked as he shuffled the pack in front of her.

‘These two cards [5 of spades and a 2 of hearts] are going to be important in a second,’ he said, placing them front down on the table.

Turning his attention to Ben, he continued: ‘They’re going to tell me about the card you’re about to pick.’ 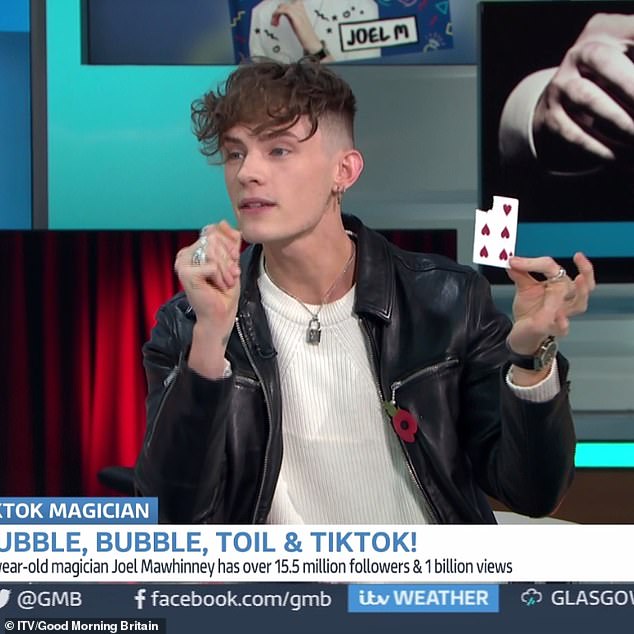 Card tricks: Joel Mawhinney (pictured), from Belfast, 24, left the presenters gobsmacked as he demonstrated one of his magic tricks on Good Morning Britain today

After asking Ben to say ‘stop’ as he shuffled the pack, Joel explained: ‘We don’t know exactly what this is, but if we’ve done this right, these two cards should tell us what that card is [pointing to Kate’s card]. Maybe, I hope!’

Revealing the cards to be a heart and a five, he then pointed to Ben’s card and said: ‘So if that card was to be a five of hearts that’d be a weird coincidence. It should be the five of hearts – or close.’

Flipping the card over, he added: ‘We were close – six of hearts.’

But he wasn’t finished there. Taking the card, he then ripped the corner which had a heart on it and made it disappear from his hand, before telling Kate she could find it if she turned to page 52 of the book in front of her. 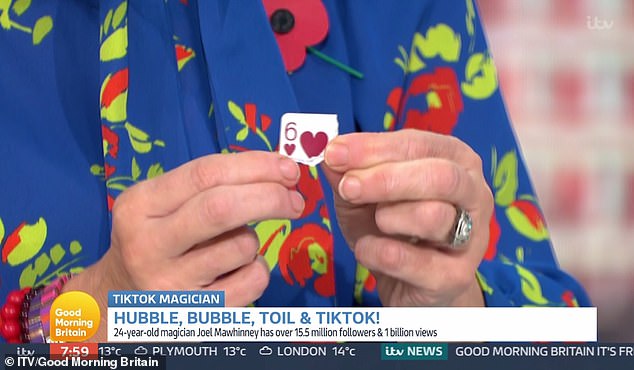 Magic: Following the trick, Kate held up the corner of the six of hearts and exclaimed: ‘Noooooo!’ Wooooah – that’s magic!’