She never fails to command attention when she attends red carpet events.

And Kate Hudson wowed in a breathtaking gold gown which hugged her stunning curves at the 2021 InStyle Awards at the Getty Center in Los Angeles on Monday.

The Almost Famous star, 42, covered up in the frock, which featured long sleeves, a turleneck, and floor-length skirt, but still accentuated her gym-honed physique with its clinging design. 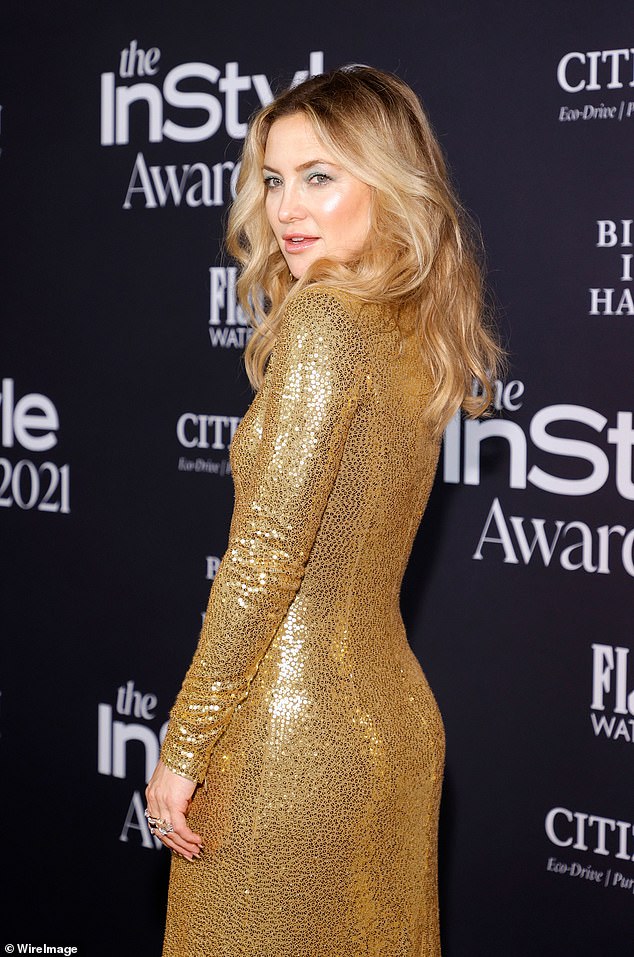 Stunning: Kate Hudson wowed in a breathtaking gold gown which hugged her stunning curves at the 2021 InStyle Awards at the Getty Center in Los Angeles on Monday

Kate turned heads in the breathtaking gold gown which managed to both conceal and showcase her toned figure.

The beauty looked every inch the Hollywood icon with her blonde hair styled into loose ringlets and a swipe of shimmering teal eye shadow over her blue eyes.

She looked upbeat as she cosied up next to Jennifer Meyer as the pair sipped on martinis at the star-studded event.

Kate put on a show as she posed for cameras with designer Michael Kors who held up her camel coat that was artfully lined with the same sequins as her dress. 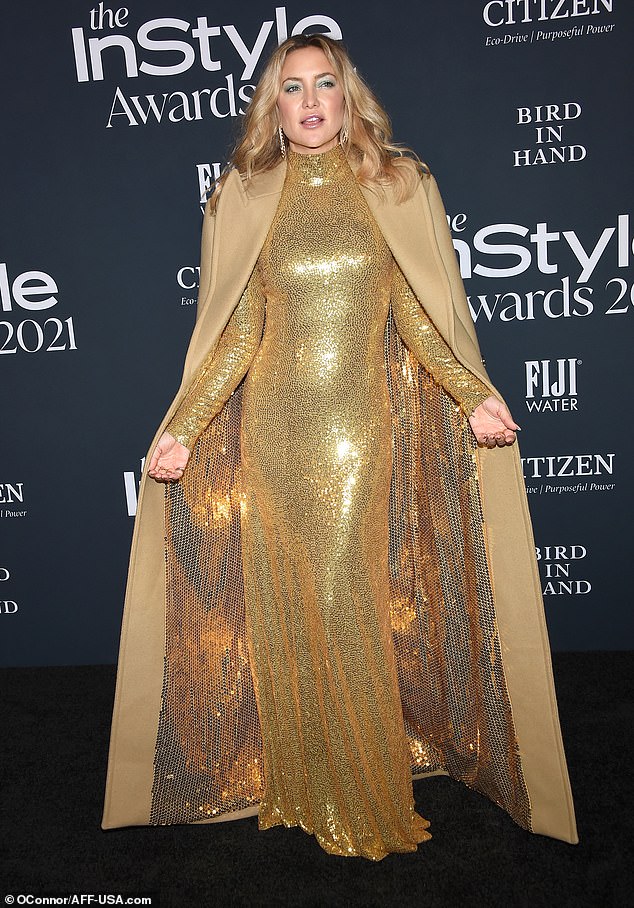 Glitzy: The Almost Famous star  covered up in long sleeves, a turleneck, and floor-length skirt, but still accentuated her gym-honed physique with the gown’s clinging design 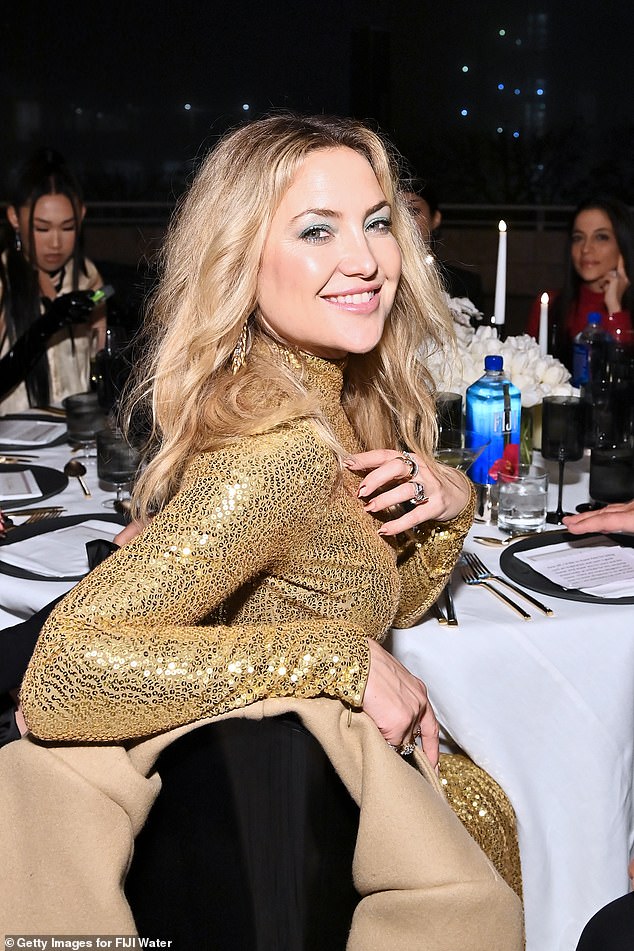 Flawless: The beauty looked every inch the Hollywood icon with her blonde hair styled into loose ringlets and a swipe of shimmering teal eye shadow over her blue eyes 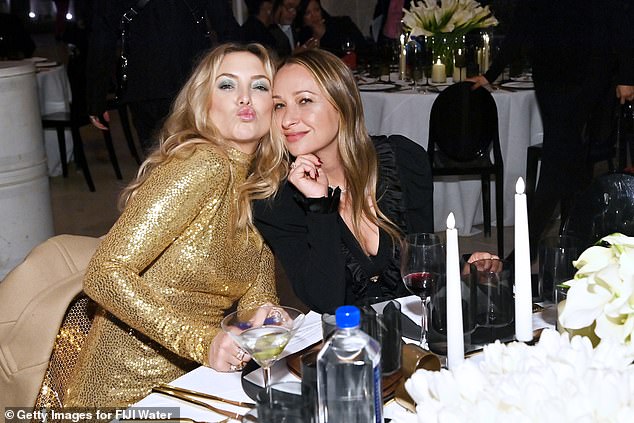 Party: She looked upbeat as she cosied up next to Jennifer Meyer as the pair sipped on martinis at the star-studded event 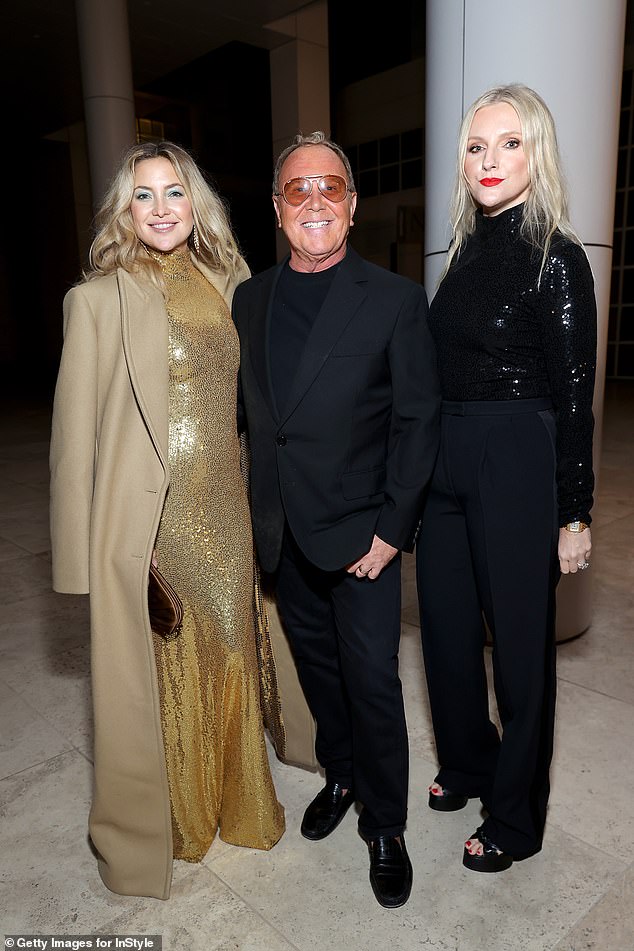 Strike a pose! Kate worked her angles for a photo with Michael Kors and Laura Brown

This year’s InStyle Awards marks the return of the iconic show after the COVID-19 pandemic forced the show to go on hiatus last year.

The awards show will recognize the ‘biggest talents and icons in fashion, beauty, and pop culture and will take place’ with a range of star-studded honorees, according to the site.

Melissa McCarthy will receive the Icon award, Simone Biles will be recognized with The Original, Michael Kors will be honored with Designer, Jason Bolden will receive Voice Of Style, Lona Vigi the Hair Stylist, Nina Park the Makeup Artist, Samantha McMillen the Fashion Stylist, Congresswoman Katie Porter the Badass Woman, and Anifa Mvuemba the Future Of Fashion. 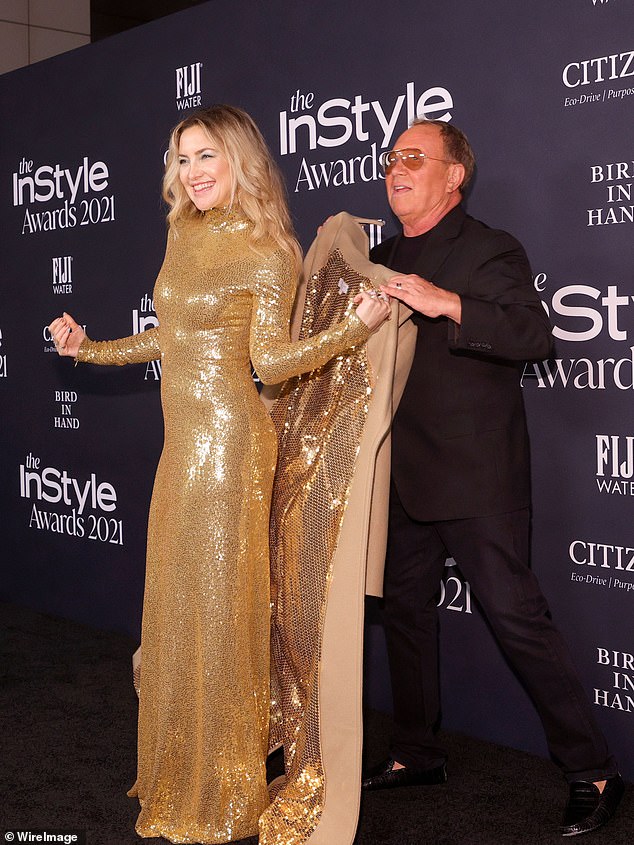 Playful: The pair put on a show as they posed for cameras as Michael held up her camel coat that was artfully lined with the same sequins as her dress 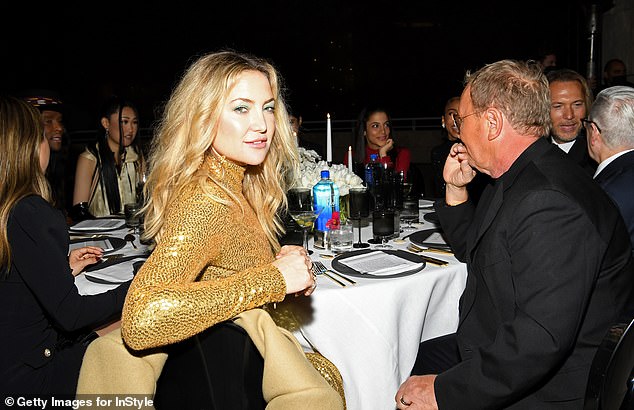 Main character: She looked every inch the leading lady as she stood out from the crowd in the glittering ensemble as they sat down for dinner 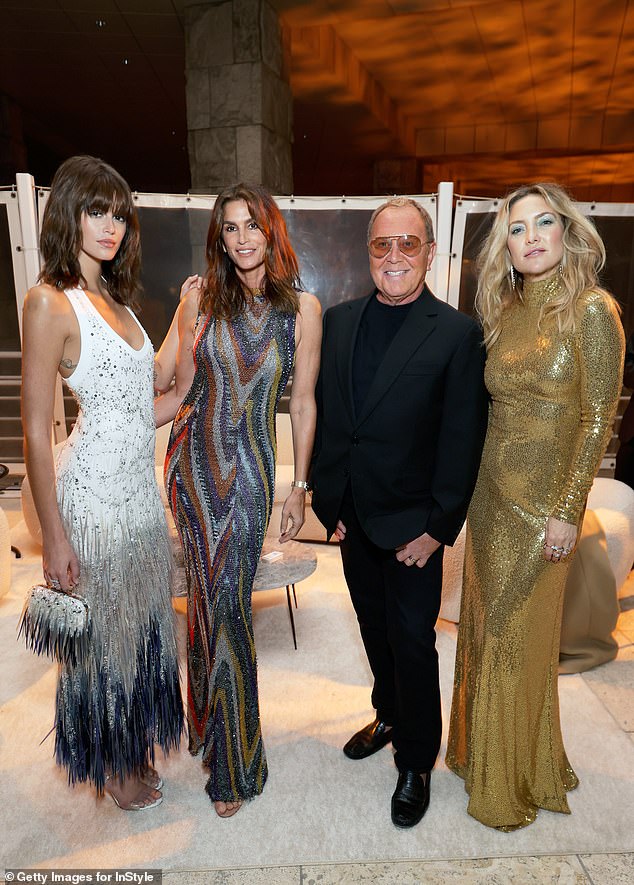 Model behaviour: Kate smouldered as she posed alongside the designer, Cindy Crawford and her daughter Kaia Gerber

The show will be in no shortage of celebrities with big names slated to present awards as well.

Kate’s glittering outing comes after she revealed in September that she and Danny Fujikawa were engaged after five years of dating.

The star posted a photo in which the loved-up pair were seen kissing on top of a mountain as she displayed her engagement ring. 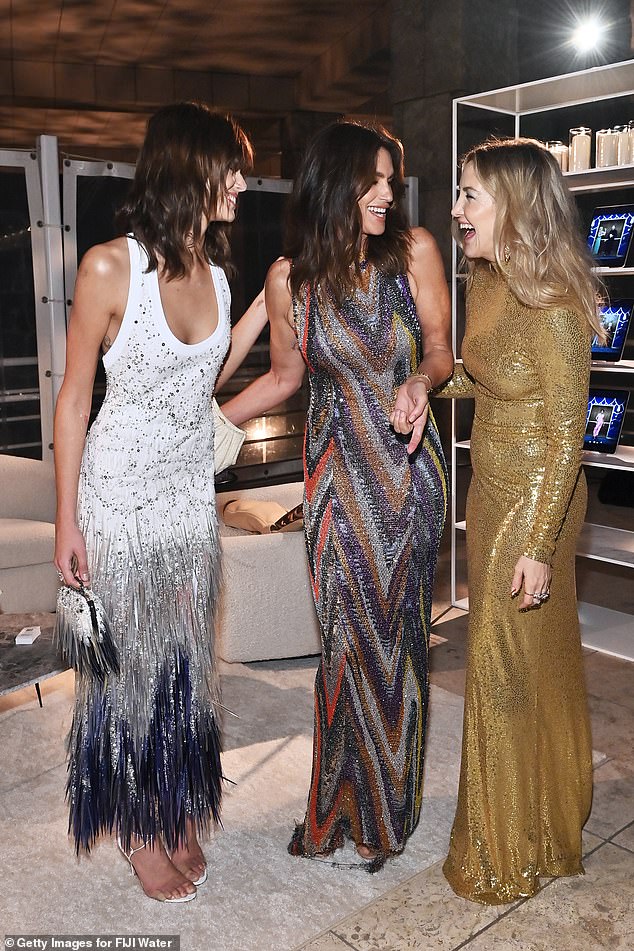 Stylish: The trio of beauties laughed together as they posed for a photo in their matching sequin maxi dresses 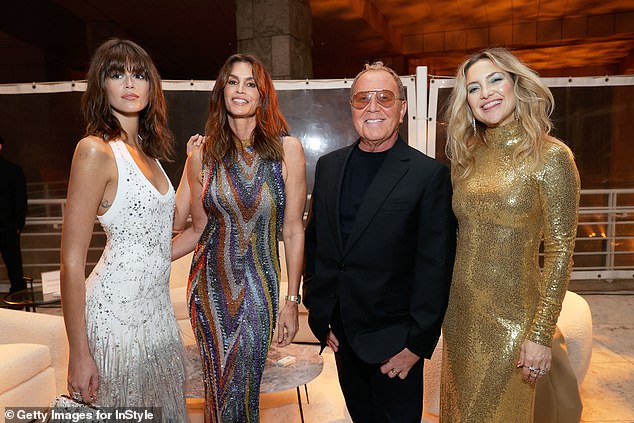 A-list guest list: Michael grinned as he posed next to the stunning stars in a chic black suit 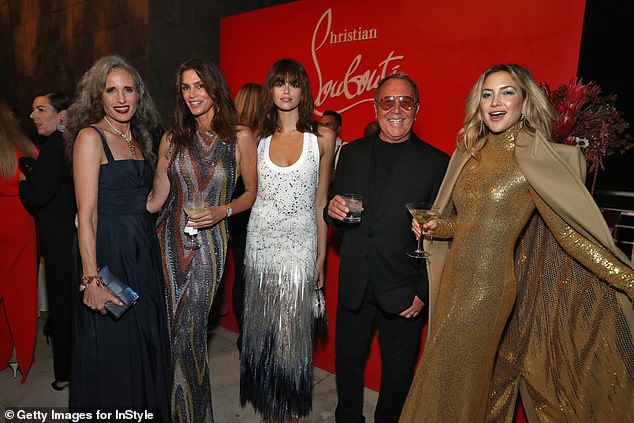 ‘Let’s go!’ she wrote in the caption, adding emojis of a bride, a groom and a wedding chapel.

During an appearance on Watch What Happens Live with Andy Cohen, Kate discussed her wedding preparations, saying, ‘I haven’t really wrapped my head around the planning process of it, but I think I’m just gonna invite the people that I love the most and I have a feeling that it might end up being kind of big.’

Kate and Dan began dating in December 2016. The two had known each other for years through Kate’s best friends Sarah and Erin Foster who are Danny’s stepsisters.

The Fabletics co-founder gave birth to Rani in October 2018. She also has son Ryder, 17, with her ex-husband Chris Robinson, 54, and son Bingham, 10, with ex-fiance Matt Bellamy, 43. 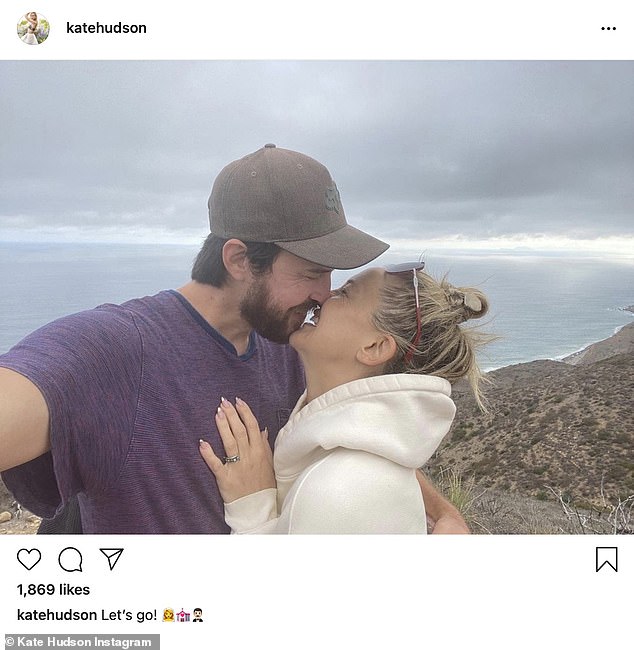 Set to wed: On September 13, the Almost Famous actress revealed that she and Danny were engaged after five years of dating 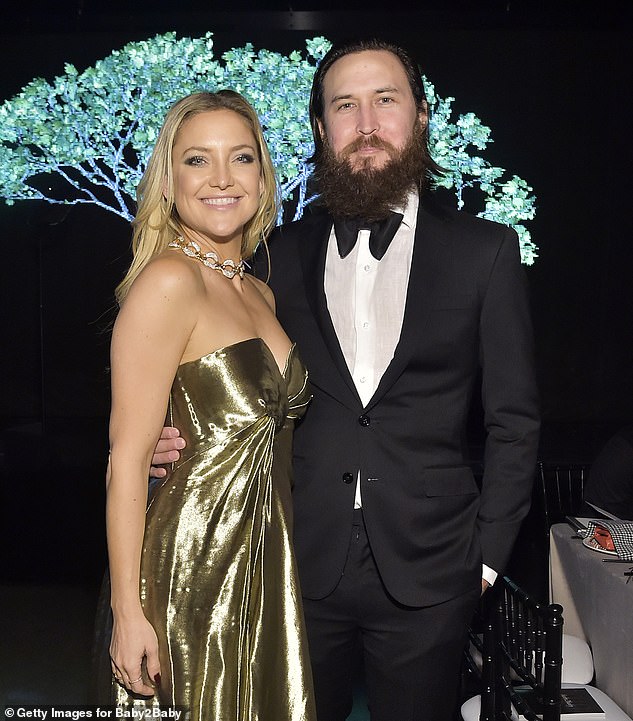 Friends to lovers: Hudson and Fujikawa began dating in December 2016 after being family friends for years. Seen in 2019