The soap star, 29, recently announced she is set to wed her boyfriend Paul Walker by sharing a series of adorable pictures with her fiancé Paul Walker.

During the outing, Kate appeared absolutely delighted flashed a huge smile as she strode out of Media City in Manchester in the sunshine. 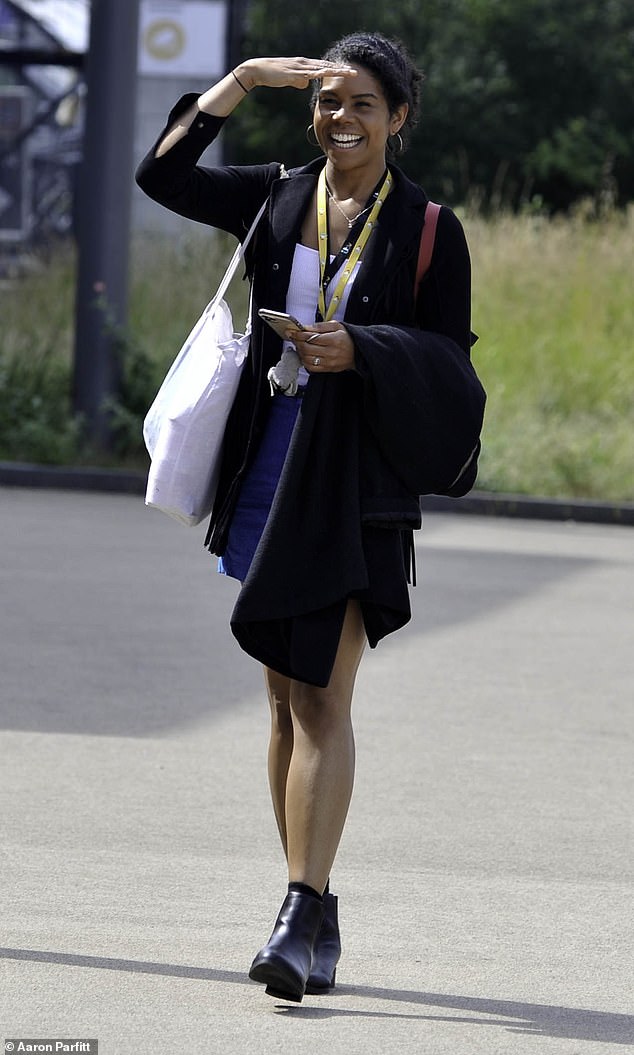 Upbeat: Kate Spencer put on a leggy display as she left the Coronation Street set hours after the Queen’s visit on Thursday

Kate looked upbeat as she headed home in the stylish skirt which she paired with a white vest top and a black fringed jacket.

She completed the ensemble with some black leather Chelsea boots and a matching belt.

The actress accessorised with a pair of large silver earrings and toted a spare jacket and a practical red rucksack. 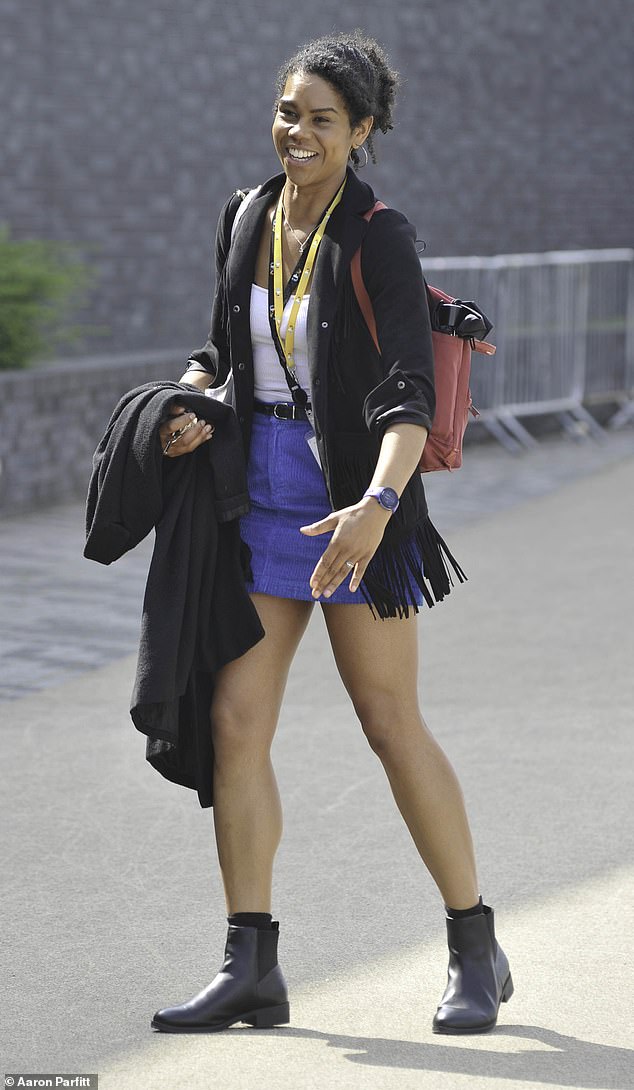 Happy days: The soap star, 29, flashed a huge smile as she strode out of Media City in Manchester in the sunshine

On a 40 minute tour of the set and studios at Media City UK in Manchester, Her Majesty, 95, wearing a teal Angela Kelly outfit with matching hat, met a host of cast and crew of the show, walking beside the cobbled street before popping into the studio where the interior of the Rovers Return is filmed.

During the visit, the royal, who described the ‘remarkable’ long-running show as ‘part of the fabric’ of society, was told a character was a trouble-maker, before she replied: ‘The programme doesn’t do a lot of trouble does it? I suppose, life’s a trouble isn’t it?’

And the royal visit isn’t the only thing Kate has to smile about as she recently became engaged to her boyfriend Paul. 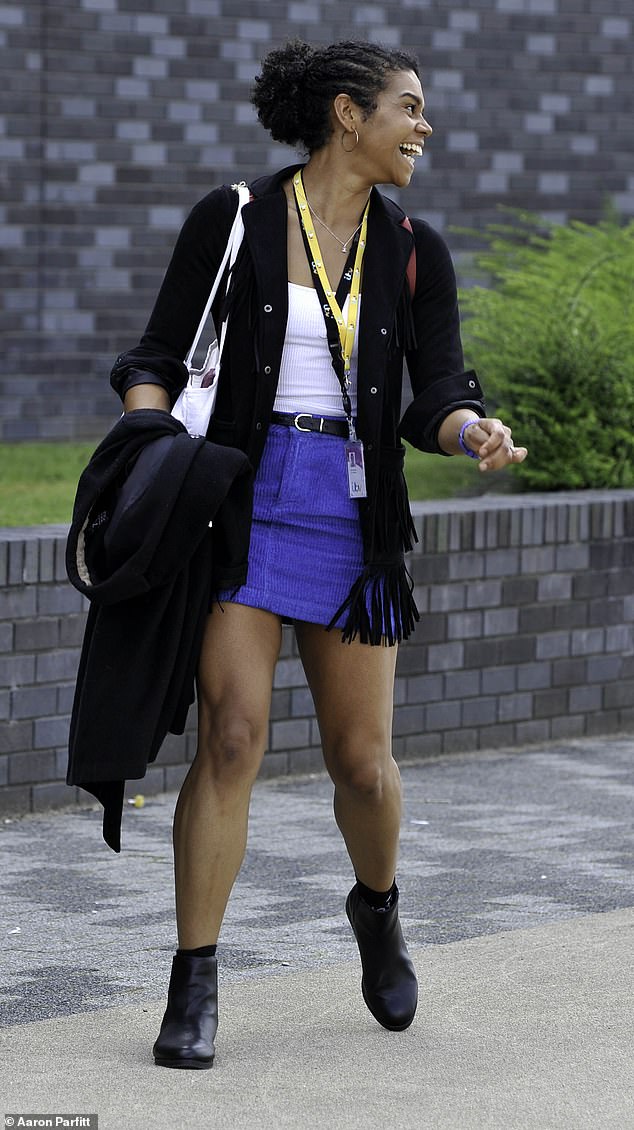 Cheerful: Kate looked upbeat as she headed home in the stylish skirt which she paired with a white vest top and a black fringed jacket

Uploading a series of teasing messages on her Instagram story, Kate wrote last month: ‘3 years ago he asked me what my perfect day consisted of.

‘I said: ‘Get up early, train in the morning, some time to chill by myself, good food, good coffee, and do something theatre/acting related.

‘Yesterday, we went to the gym, had great coffee, learnt some lines for Corrie, went on a little walk, went to a pub, played backgammon, made tiramisu and ate steak.

‘It was perfect. And then this happened.’ 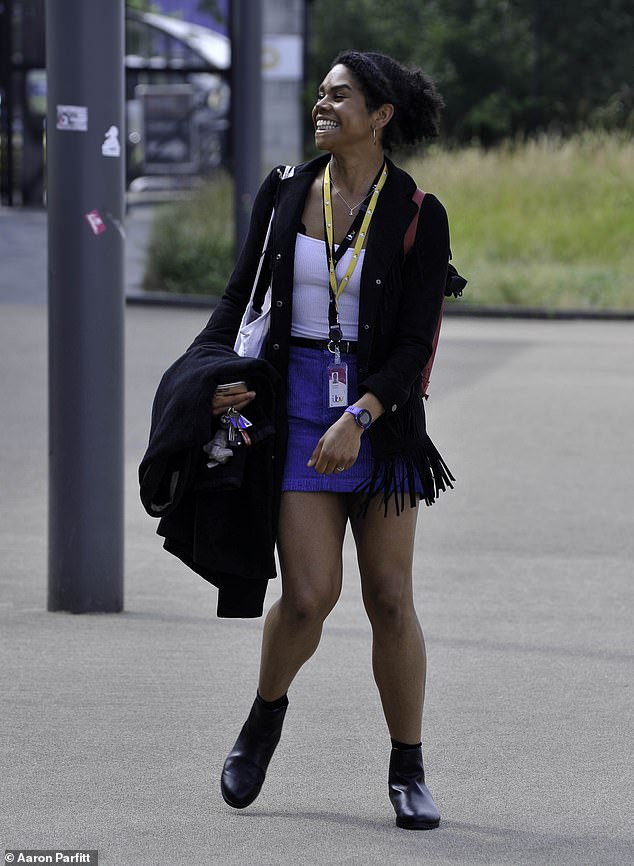 Heading home: The actress accessorised with a pair of large silver earrings and toted a spare jacket as she left the soap set

Finally announcing the engagement, Kate then uploaded a beaming selfie of herself holding up a ring on her finger as she hugged Paul tightly.

Kate also uploaded a series of photographs onto her Instagram account which photo documented the day that Paul proposed to her.

Included amongst the images was one of the two of them lovingly embracing in a picturesque garden, with Kate’s engagement ring on display.

Last year Kate returned to Corrie reprise her role as Grace, heading back to the cobbles to reveal that she was pregnant with Michael Bailey’s child. 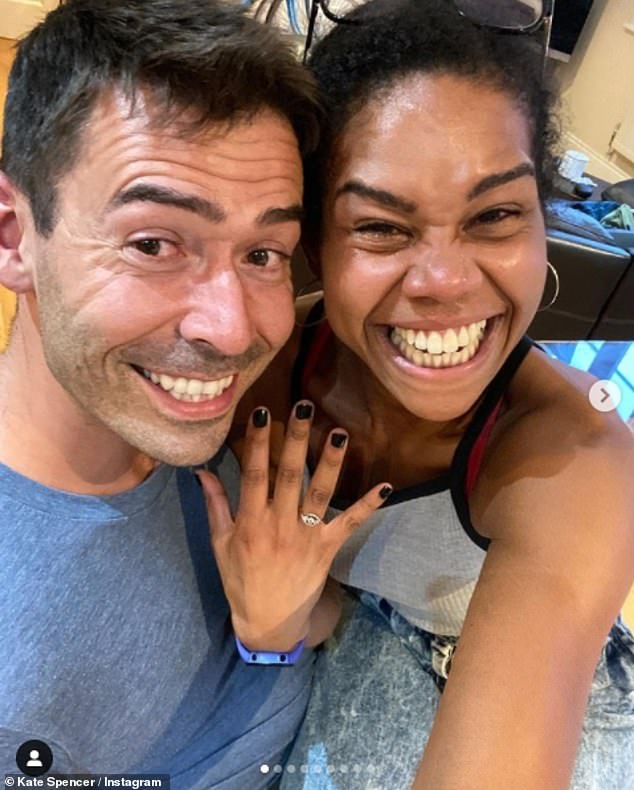 ‘A million times over, completely and utterly yes’: Kate has plenty to smile about as she became engaged to her boyfriend Paul Walker last month