She’s not afraid to show off her incredible physique on social media.

And Kelly Brook once again wowed fans with a stunning bikini picture uploaded to her Instagram on Thursday, as she holidayed in Mallorca.

The 41-year-old model took to the picture-sharing platform to upload the sizzling snap while on a trip to the Balearic island. 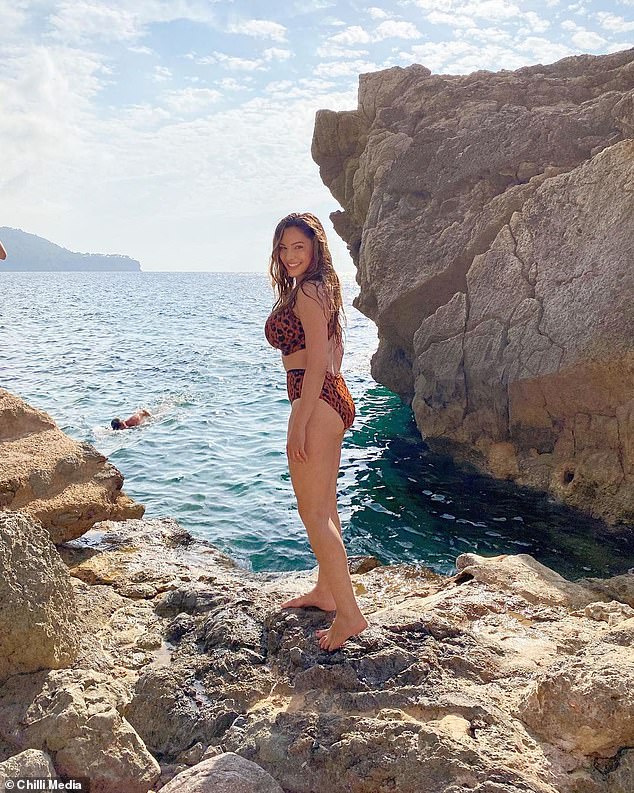 Stunning: Kelly Brook, 41, sizzled on Thursday as she posed in a leopard print bikini while enjoying a day at the beach in Mallorca for a photo uploaded to her Instagram

Kelly set temperatures soaring as she stood on a rocky ledge in a striking leopard-print bikini.

Flashing a grin, the model had her back facing the camera and looked back over her shoulder playfully.

In the caption for her latest post, she simply wrote ‘Deià’, which was the name of the village on the island near to where the image was taken.

The Balearic Islands, of which Mallorca is one, currently finds itself on the UK government’s green travel list.

As such, anyone travelling back to the UK from the island does not need to quarantine, but they do still need to take a Covid test on or before their second day back in the country.

It comes after Kelly last month revealed that it was ‘so lonely’ backstage as the contestants had to keep their identities secret from each other and couldn’t chat. 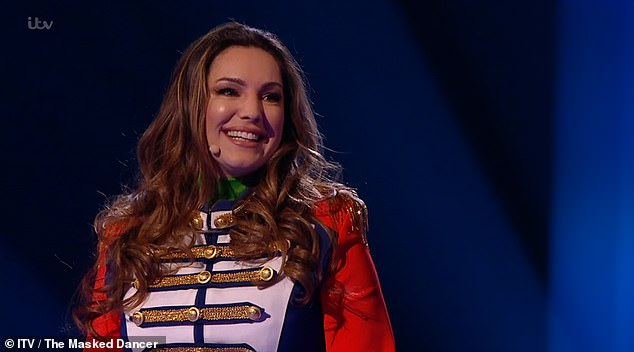 Top secret: Kelly Brook revealed last month that it was ‘so lonely’ backstage at The Masked Dancer as the contestants had to keep their identities secret from each other and couldn’t chat

While appearing on Heart Breakfast on Monday, the model, 41, explained how the stars even wore jumpers that said ‘don’t speak to us’ while filming at Wembley.

Radio hosts Jamie Theakston and Amanda Holden quizzed Kelly about taking part in The Masked Dancer, which was won by gymnast Louis Smith.

Speaking about not knowing who anyone was in the show, Kelly said: ‘Yes it was so lonely backstage! We walk around with these jumpers on that say ‘don’t speak to us’.

‘You’re just backstage at Wembley thinking, is everyone else as terrified as I am?

‘Because you don’t have that camaraderie, so you can’t share any of your experience, so you think you’re the only one freaking out. 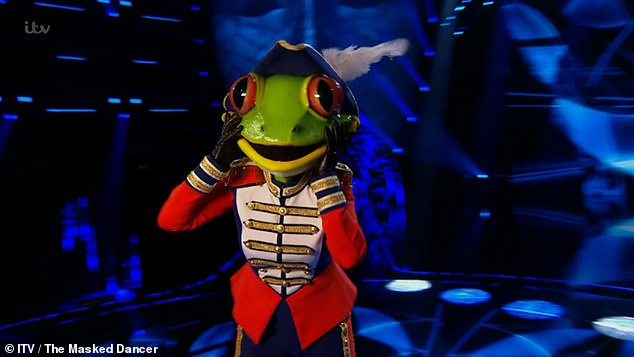 What a disguise: The model and presenter, 41, was unmasked as being the Frog

‘But since the show has aired and we’ve figured out who everyone is, I’ve been talking to you Howard [Donald] and Bonnie [Langford], and everyone’s like ‘did you do this, did you feel like this’ and everyone was in the same boat really.’

The trio also discussed whether Kelly managed to correctly guess any of the other contestants, which included Zoe Ball as Llama and Christopher Dean as Beagle.

Kelly told Amanda and Jamie: ‘Not really…I couldn’t bear not knowing so I went on Twitter and once I saw all the fans guessing, then things started to make sense.

‘I knew then that Squirrel must be Bonnie [Langford] because only Bonnie can move like that! To be honest I thought it was Ashley Roberts!’ 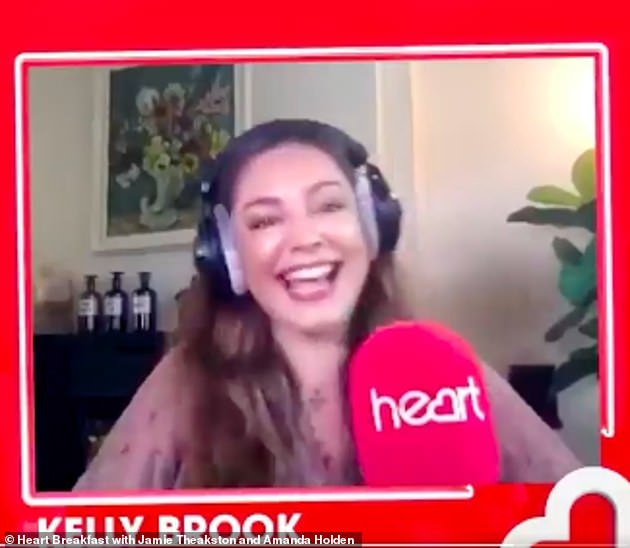 Reflecting: While appearing on Heart Breakfast, Kelly also explained how the stars even wore jumpers that said ‘don’t speak to us’ while filming at Wembley

Amanda laughed and agreed, saying: ‘So did we! We thought she was double bluffing so everyday she’s like ‘guys it’s not me’ and I was like, there’s no one I know that can stick their leg up round their ear like Ashley Roberts!’

Kelly was unveiled to be the Frog, with only judge Oti Mabuse correctly predicted that it was Kelly underneath costume while the other panel members guessed the likes of Katie Price, Caprice and Carol Vorderman.

Talking after the reveal, Kelly said: ‘I have always loved dancing, I’ve not danced for years. I can pat myself on the back and say: ‘Yeah, I did that’ it’s been the best experience ever.’ 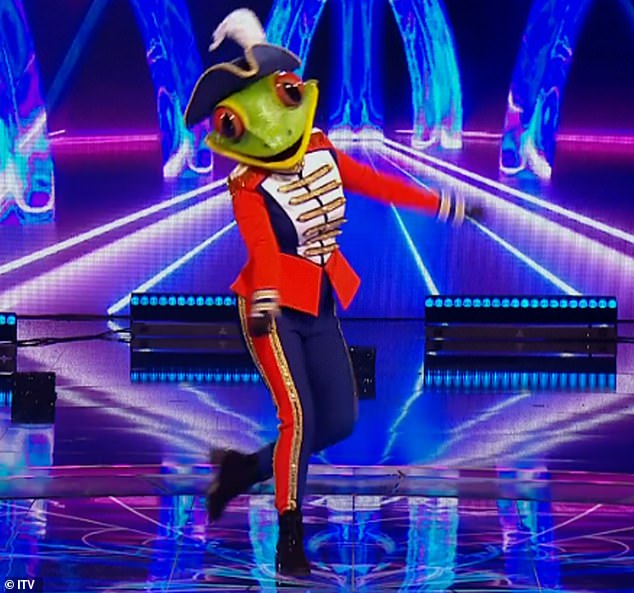 No way! The judges were stunned to discover Kelly was underneath the Frog mask 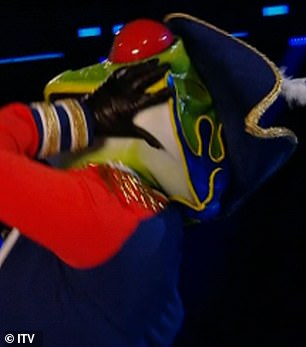 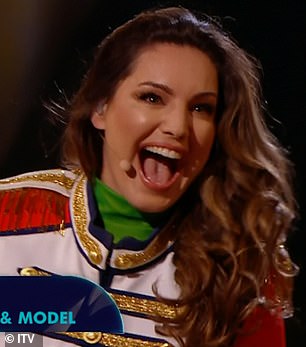 Fun: Talking after the reveal, Kelly said: ‘I have always loved dancing, I’ve not danced for years. I can pat myself on the back and say: ‘Yeah, I did that’ it’s been the best experience ever.’ 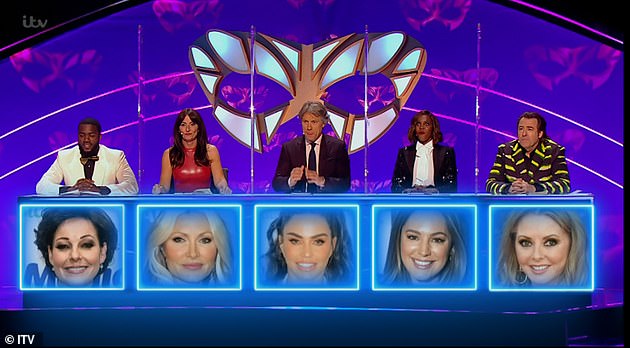 Well done! Again, the only judge to guess correctly was Oti who predicted it was Kelly underneath Frog while her co-stars guessed Katie Price, Caprice and Carol Vorderman