Right-wing talk show star Mr Zemmour, who has been convicted of inciting hatred, has been tipped to run in next year’s French presidential election. Though he has not officially announced his candidacy, Mr Zemmour has described himself as a “candidate in the debate” in recent months, and quit his prime-time chat show, presumably to comply with electoral rules. A new poll by Ifop-Fiducial saw the pundit gain 17 percent of the vote and make it to the second round of the election, confirming earlier polls that saw him overtake Marine Le Pen, who lost out to President Macron four years ago.

Mr Zemmour, who has carved out a career by testing the limits of political correctness, is frequently criticised for his hateful rhetoric against a range of minority groups.

On Sunday, Mr Zemmour controversially remarked in an interview with BFM, that women earned less than men because they chose low-paying professions.

Last month, the television personality also used a rally in Normandy to reference the English as France’s “greatest enemies for a thousand years” while he also claimed the D-Day landings brought “occupation and colonisation” by the US.

He said: “D-Day was an enterprise of liberation but also of occupation and colonisation by the Americans.”

Read More: Putin to blame for tensions in the Balkans says UK minister 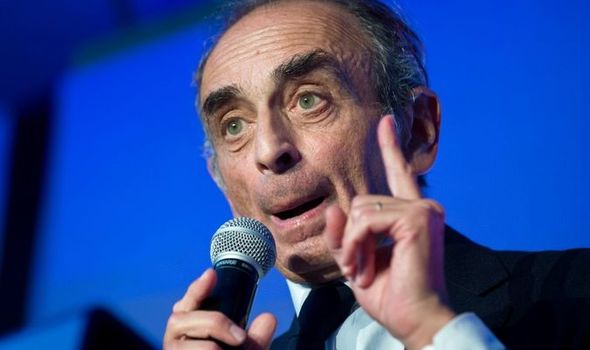 Mr Zemmour has been convicted of inciting hatred (Image: Getty)

Mr Zemmour has long had anti-English sentiments, having lamented the “unbearable domination” of the English language in 2012.

Speaking to RTL Mr Zemmour said: “The issue of foreign languages is in fact posed in a very hypocritical way because the only concern lies in the use of English.

“The objective of our leaders is to transform the little Frenchman into a perfect Franco-American, but they do not manage to succeed.

“All of this while the teaching of the French language is denied, despised; the young generations have a poor vocabulary.

“Unlike English, which is easier, French was created by the elites, thus its complexity.”

This speech, entitled “The unbearable condemnation of English” in a YouTube video uploaded by RTL in 2012 demonstrates his long-standing opposition to the use of the language.

Last month the controversial television personality also appeared to mock the Queen by posting a 28-year-old picture of Her Majesty looking down the barrel of a gun.

Mr Zemmour captioned the image with a love heart, after he was himself attacked for pointing a high powered sniper rifle at a journalist during a security exhibition in Paris.

In the throwback interview Mr Zemmour added that English influence on the French language was a “symbol of submission.”

He said: “A language is not only a way of communicating, it is also a way of defining a culture, a civilisation.

“A language is a vision of the world.

“English is the language of the globalisation that reigns over us.

“Looking for a French-English bilingualism is a formidable symbol of submission.

“According to a study by the EU, the Spanish and the French are the most likely to prefer to speak their own language.

“Of course, nobody asks the English to speak another language.

“So the two European peoples who reject English the most are those who at some point in history had empires.”

Mr Zemmour, who has also made provocative remarks against Islam and immigrants, has nevertheless garnered significant support by swathes of the French electorate.

Though he is not likely to pose a significant challenge to Mr Macron winning a second presidential term, recent polling suggests Mr Zemmour has overtaken National Rally’s Marine Le Pen.

An Ifop-Fiducial poll for newspaper Le Figaro and TV station LCI, showed that Mr Zemmour would win 17 percent of the first-round vote.

That would place the candidate just ahead of Ms  Le Pen on 16 percent, but well behind Mr Macron on 25 percent.

Last month’s Harris Interactive poll also projected the talk show host to win 17 percent of the first round vote, ahead of his right-wing rival Ms Le Pen on 15 percent.