Earvin ‘Magic’ Johnson won five NBA championships and three MVP awards during his iconic Hall-of-Fame career, but his time on the court was disrupted 30 years ago when he was diagnosed with HIV.

Johnson, now 62, discovered he had the virus during a physical exam before the 1991-92 season.

Thinking the disease was a death sentence due to the lack of available scientific information on it at the time, he announced his retirement from basketball soon after.

While Johnson would play basketball again, featuring on U.S.A. Basketball’s 1992 Olympics team and playing a stint with the Los Angeles Lakers in 1996, the diagnosis ended the prime of his career, and changed his life forever.

Thirty years later, living life with HIV is not as challenging as it was in the 1990s, and Magic is looking back at the moment his life changed forever through an interview with CBS News.

Earvin ‘Magic’ Johnson was diagnosed with HIV 30 years ago, and feared that the virus would kill him. Pictured: Johnson speaks to CBS’ Gayle King about his HIV diagnosis 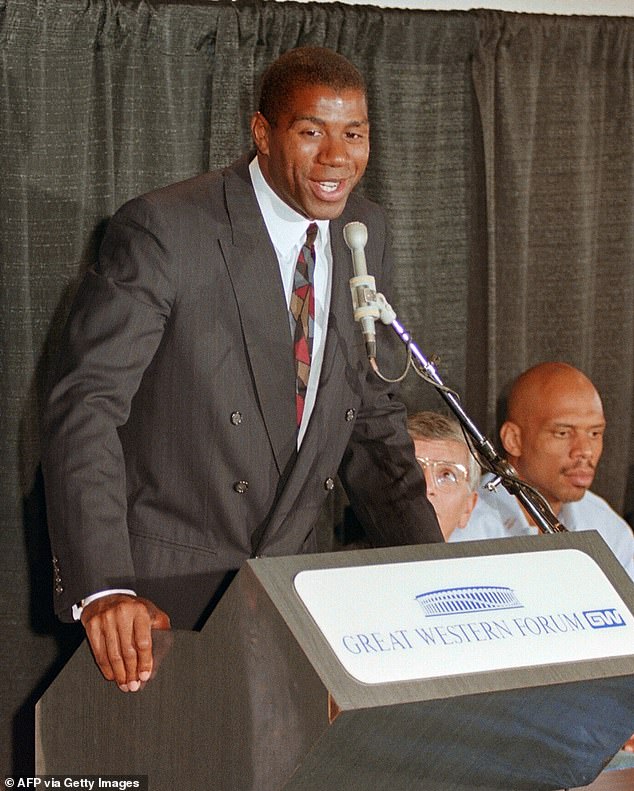 On November 7, 1991, 30 years to the day on Sunday, Johnson’s team, the Los Angeles Lakers, called a sudden press conference during which the player revealed to the world his diagnosis, and that it would end his basketball career.

‘Because of the HIV virus that I have attained, I will have to retire from the Lakers today,’ Johnson said during the conference.

He then assured the public that he had not yet developed AIDS as a result of HIV, and his wife, Cookie, was negative as well.

‘I plan on going on and living for a long time,’ Johnson said, grinning, and attempting to show the world that he was at peace with his diagnosis.

He revealed to CBS This Morning, though, he was actually confused, and even feared his own death.

‘You just sit there and say: “What does this mean? Am I gonna die?”‘ Johnson told co-host Gayle King about his thoughts when he got the diagnosis.

‘And they say: “Hey, we ran the tests a couple of times, and yes, you do have HIV.” And so I just lost it right there, you know?’ 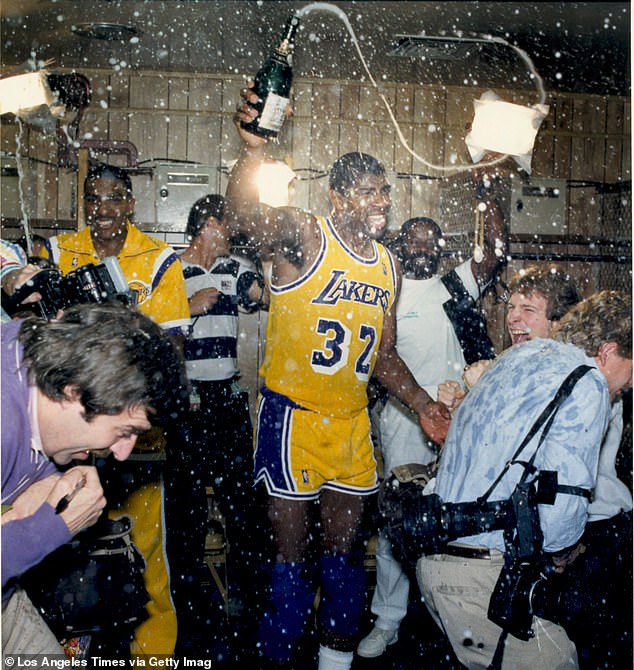 Johnson was a five time NBA champion and three time MVP when he suddenly retired in 1991. Pictured: Johnson celebrates winning the 1987 NBA Finals alongside his Los Angeles Lakers teammates 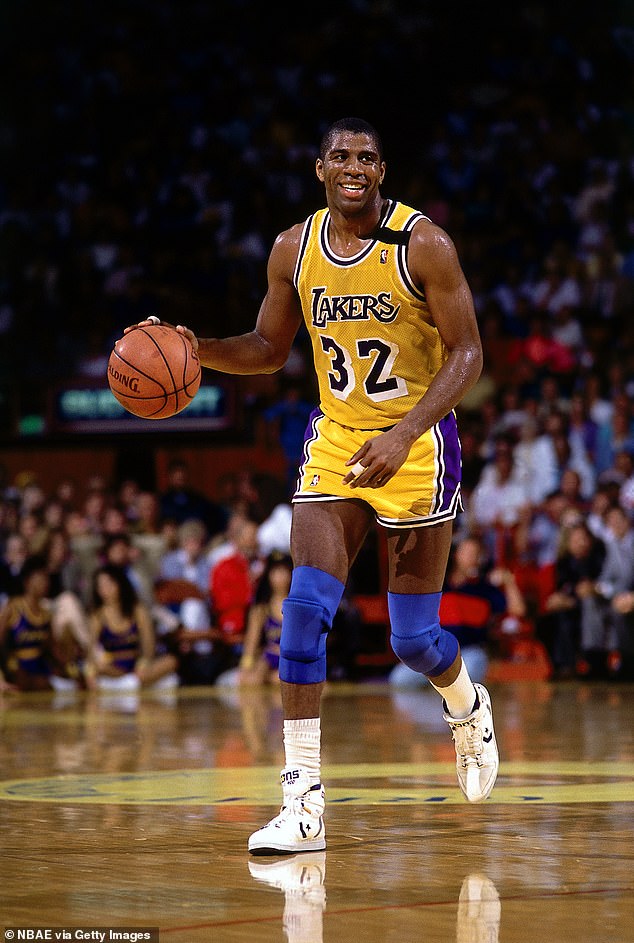 Due to his high-profile as an NBA star, Johnson was one of the most well-known people in the U.S. to publicly be living with HIV. Pictured: Johnson plays a game at the Forum in Los Angeles, California

At the time, an HIV or AIDS diagnosis was seen as a death sentence.

The virus first began to appear in Los Angeles in the early 1980s, and confused experts when they found a sudden wave of gay men contracting a rare form of pneumonia.

An outbreak of AIDS swept across communities of gay men throughout the 1980s, and the virus became a household name.

As the decade went on, scientists learned more about the disease, though many Americans accused the government of not doing enough to fight it due to its association with gay men.

The public’s familiarity with the name of the disease, but lack of information on how it worked and how it spread, created a large stigma around people with HIV as well, meaning a diagnosis had major social implications.

The stigma around the condition was still strong in the early 1990s.

‘I had to really learn a lot about the disease, HIV as well as AIDS,’ Johnson told CBS This Morning.

‘I had to make sure that I was open-minded enough to ask a lot of questions, go get a lot of information from different people.’

Johnson informed his wife, Cookie, of his diagnosis and initially feared she had HIV, because the virus spreads through sexual contact.

Cookie was also pregnant at the time, and the couple feared their unborn child may be born with the virus as well. Johnson’s wife, Cookie (left), stood by her husband after he was diagnosed. She, nor her then-unborn child, tested positive for HIV

His wife tested negative for HIV, though, and their son, Earvin Johnson III, was born uninfected by the virus as well, to Johnson’s relief.

Cookie still feared for her husband and did not want him to hold the iconic press conference, fearing people would treat them like outcasts.

‘At that time, people weren’t educated. So they thought you couldn’t touch people, you couldn’t hug people,’ Cookie told the news program.

‘And I didn’t want people to treat us like we were lepers.’

Johnson added: ‘It proved to be the right decision.

‘It helped people who were living with not just HIV and AIDS, but with any disease, that you can live on, you can be – live a productive life.’

Johnson would later attempt a return to basketball, though he received some pushback from his peers.

In 1992, he joined U.S.A. Basketball at the Summer Olympics in Barcelona, Spain.

The team, dubbed the ‘Dream Team’ due to the number of NBA stars and future Hall of Famers on the roster, ended up winning a gold medal. 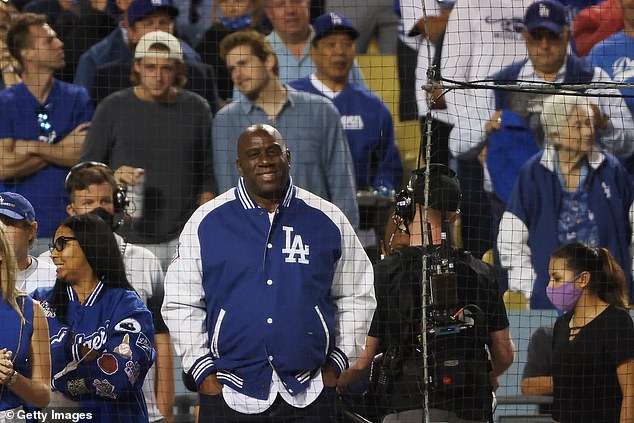 Johnson is now living healthily with HIV. He later returned to the Lakers as team President in the 2010s, and is also co-owner of the Los Angeles Dodgers and Los Angeles Sparks. Pictured: Johnson attends a Dodgers playoff game at Dodger Stadium in Los Angeles, California

Johnson told CBS This Morning that not all players were comfortable playing with him, including Karl Malone, a fellow teammate who was worried after Johnson suffered a cut on the floor.

Johnson would go on to become an important figure to the HIV community, being the most high profile person to publicly have suffered from the virus at the time.

He began to take a ‘cocktail’ of drugs three times a day to manage his condition, and Johnson has prevented it from developing into AIDS for 30 years now.

The cocktail consists of antiretroviral drugs that stop virus cells from replicating in the body and help repair damage the disease does to the immune system.

Now he only has to take the cocktail once a day, he told to CBS This Morning .

The former Lakers star later served as President of the team in the late 2010s, and he is a part owner of the Los Angeles Sparks of the WNBA and MLB’s Los Angeles Dodgers.