She is set to star in the upcoming comedy movie A Week In Paradise.

And Swedish-American actress Malin Akerman, 43, grabbed the spotlight in Primrose Hill on Friday as she was seen teaming up with Men Behaving Badly’s Caroline Quentin, 60, during a shoot for the film.

Malin looked stunning as she took part in filming at Odette’s Restaurant, dressed in an eye-catching hot pink blazer and blue denim jeans. 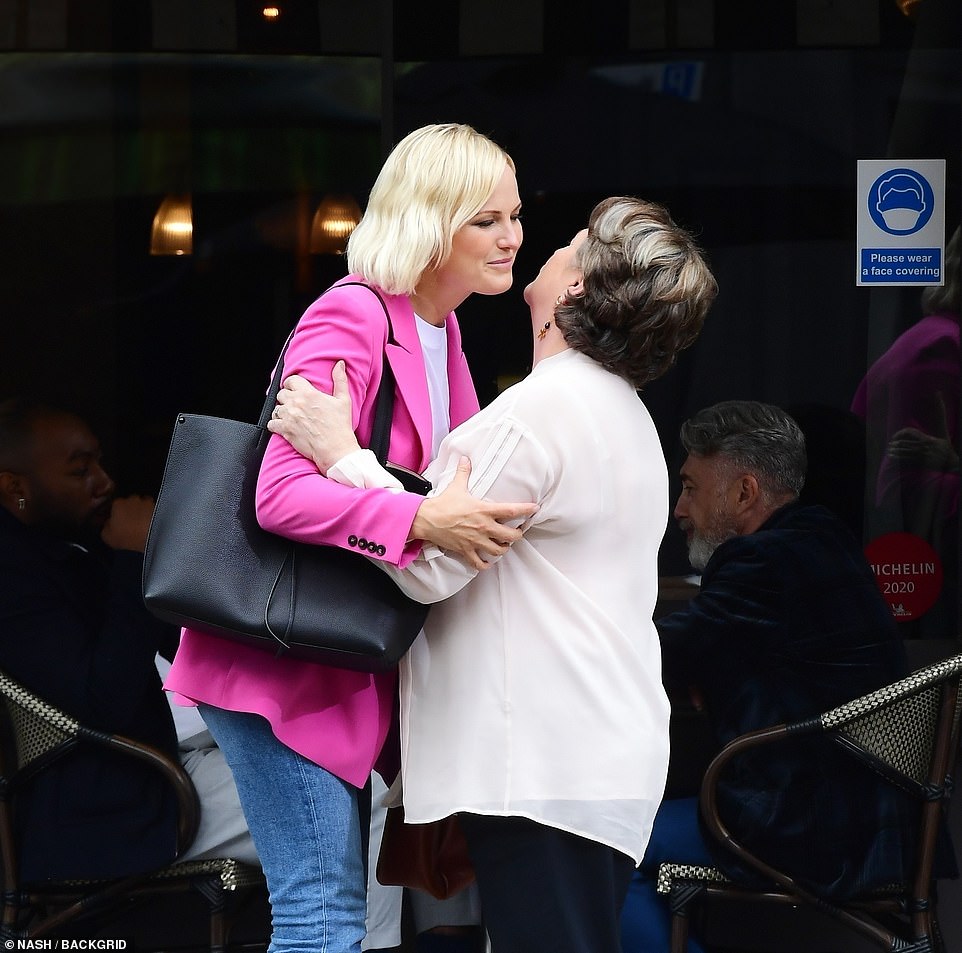 Saying hello: Swedish-American actress Malin Akerman sported a hot pink blazer and denim jeans as she teamed up with Caroline Quentin while on the set of new comedy film in Primrose Hill

Beneath her vibrant jacket, Malin could be seen sporting a simple white top, which contrasted with the large black leather handbag tucked over her right shoulder.

Malin added height to her ensemble with a pair of nude-coloured heels.

Caroline meanwhile, went for a more understated look, in a flowing beige top featuring strands tied off at the front.

On her lower half, she wore navy trousers and a pair of flat shoes in a similar colour to the top she had on. 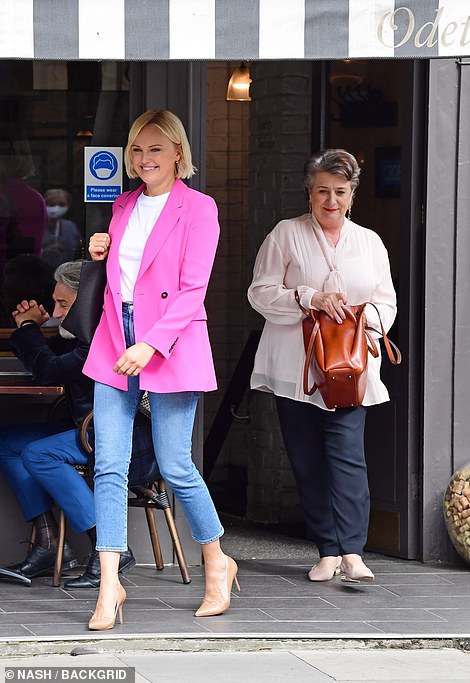 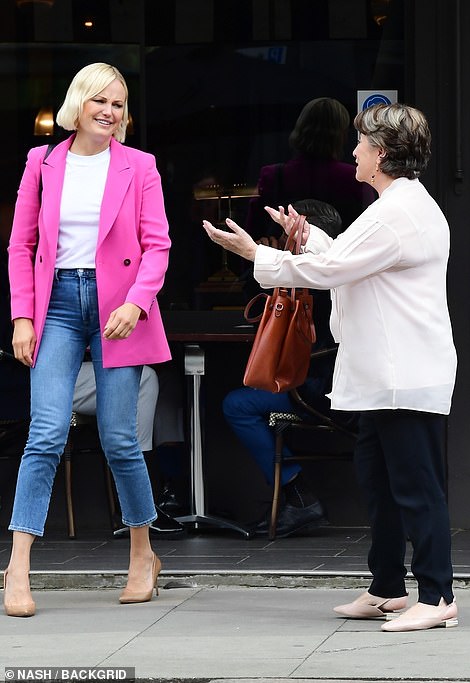 Smiling: Malin grabbed the spotlight in Primrose Hill on Friday as she met up with Men Behaving Badly’s Caroline Quentin, 60, during a shoot for A Week In Paradise 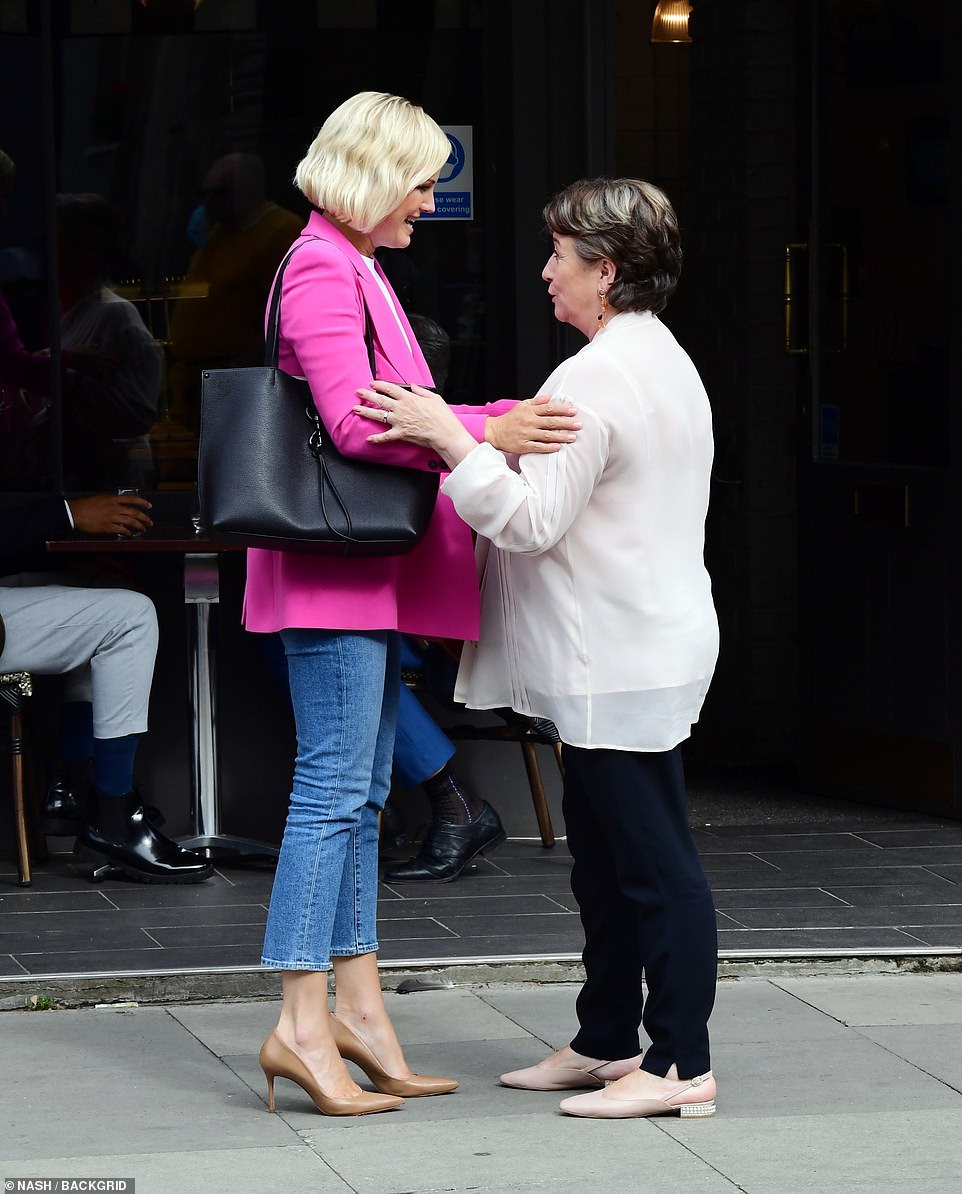 Warm greeting: Caroline meanwhile, went for a more understated look, in a flowing beige top featuring strands tied off at the front 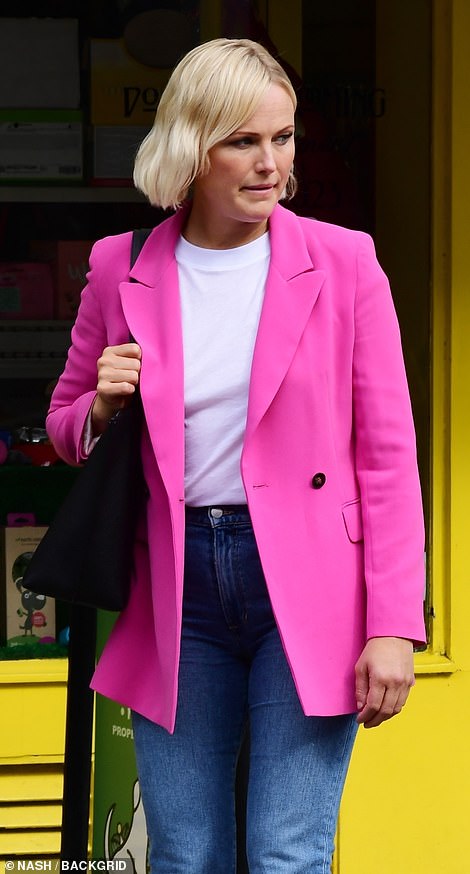 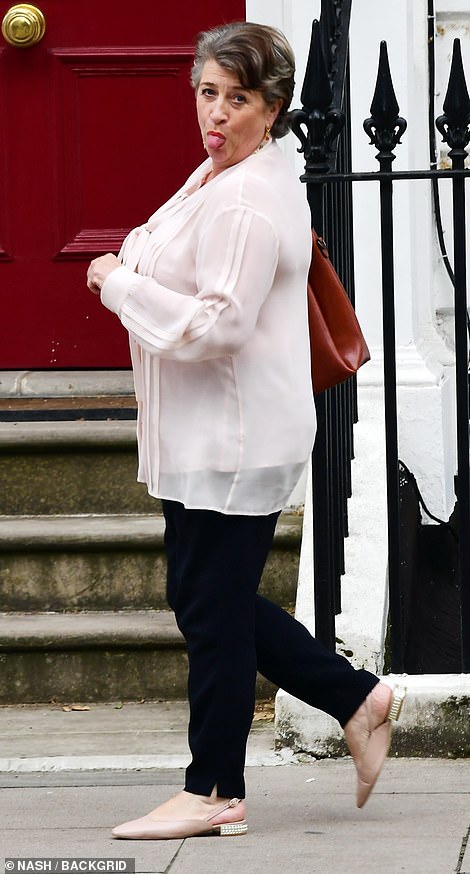 Dream team: She looked stunning as she took part in filming at Odette’s Restaurant, dressed in a hot pink blazer and blue denim jeans

Like Malin, Caroline carried a large handbag with her, though hers was in brown leather.

The pair seemed to have hit it off on the film set as they both beamed at seeing one another.

Noticing the cameras, Caroline even cheekily poked her tongue out as she made her way about the filming set. 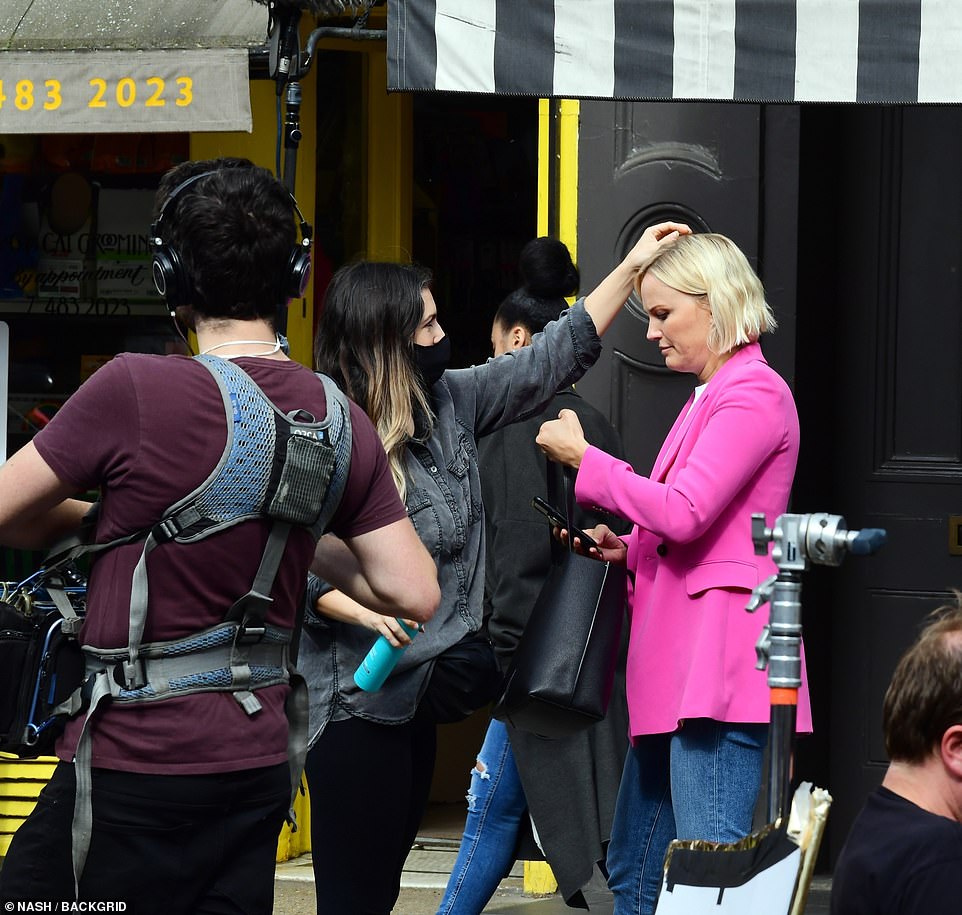 Between takes: Malin looked down at her phone at one point in-between takes for the film, while a member of the movie crew attended to her hair 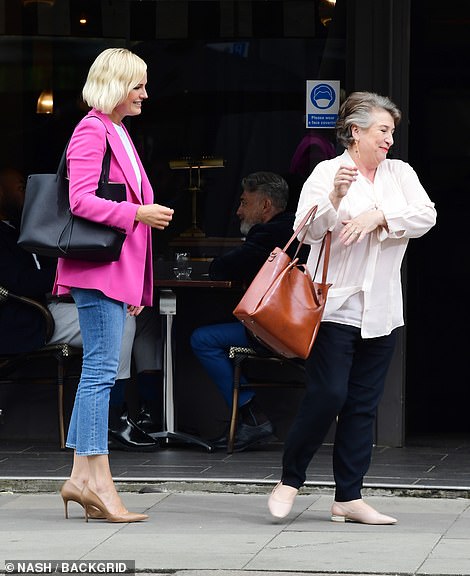 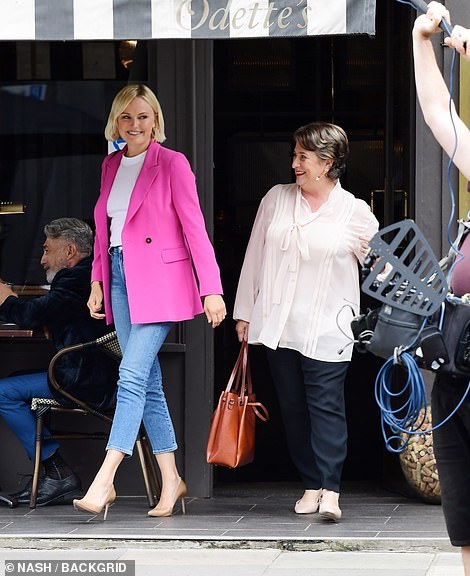 Turning away: On her lower half, Caroline wore navy trousers and a pair of flat shoes in a similar colour to the top she had on 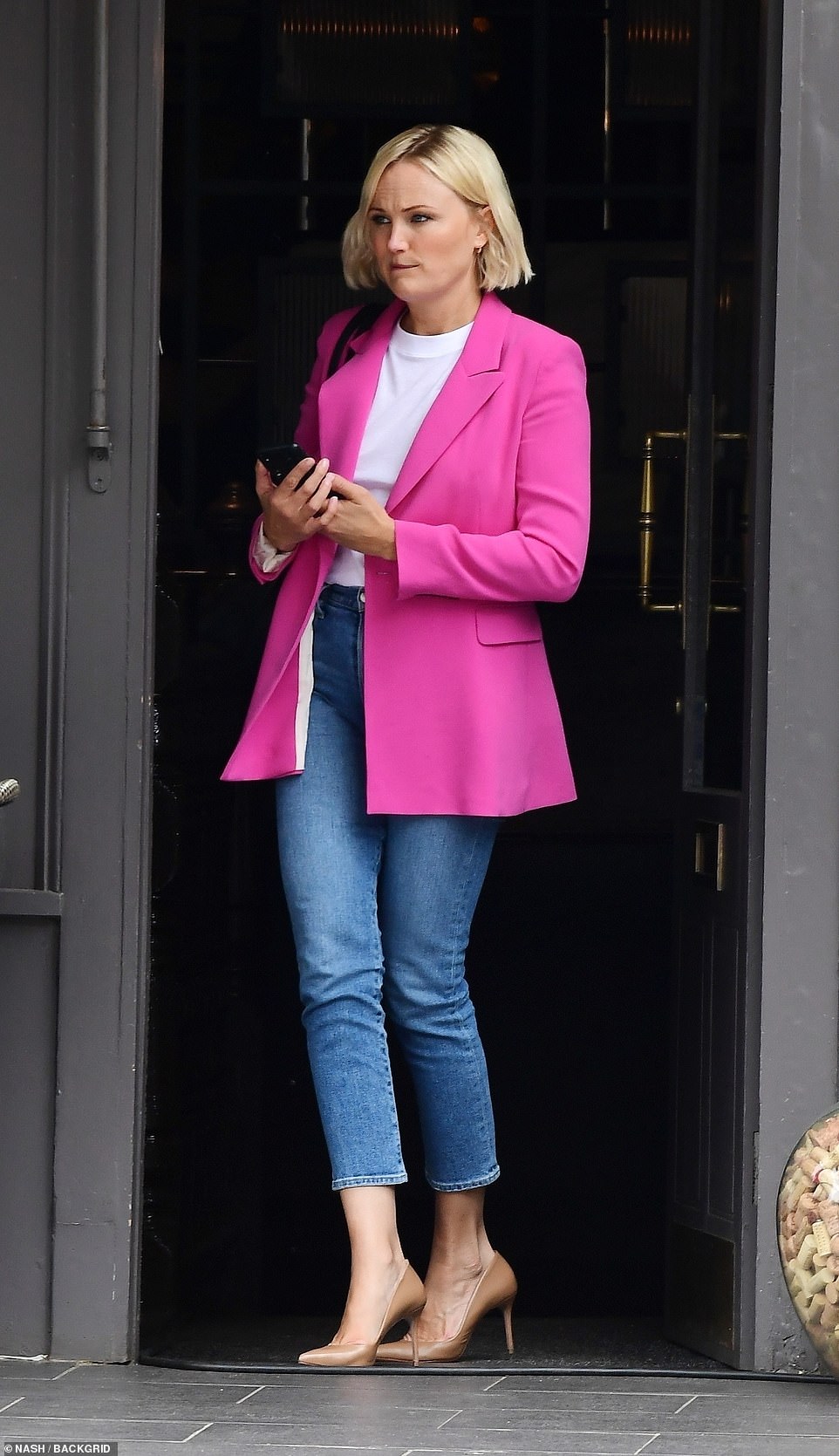 A Week In Paradise, which has been written by Kate Wood, is based on a story by Philippe Martinez, who will also co-direct the movie alongside Alan Latham.

The film focuses on the story of Maggie, played by Malin, a film star whose world collapses around her when her film-star husband’s affair is outed by the paparazzi.

In an attempt to escape the fallout of the situation, Maggie heads to a hotel on the Caribbean island of Nevis owned by her ex-patriot cousin.

During her week away, Maggie is able to both find herself again and also a brand new romantic flame. 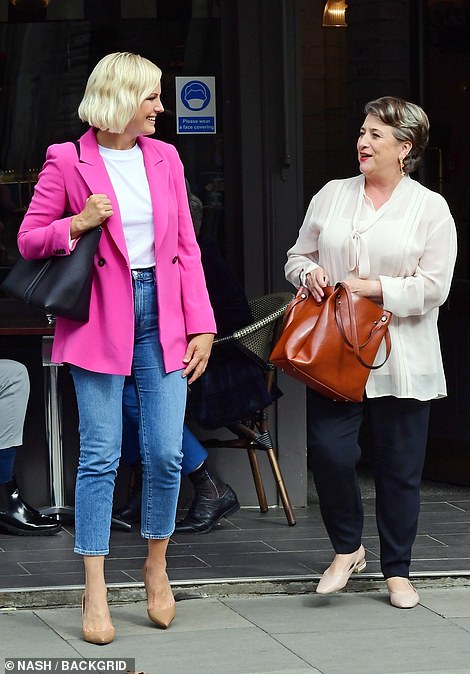 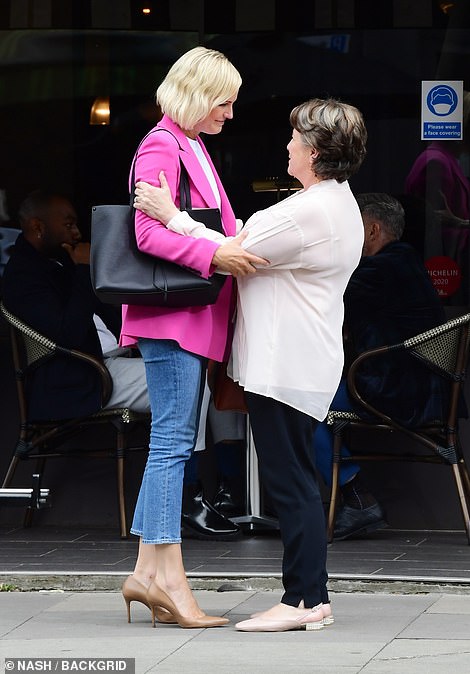 On the job: In the film, Malin plays the role of Maggie, a film star whose world collapses around her when her film-star husband’s affair is outed by the paparazzi 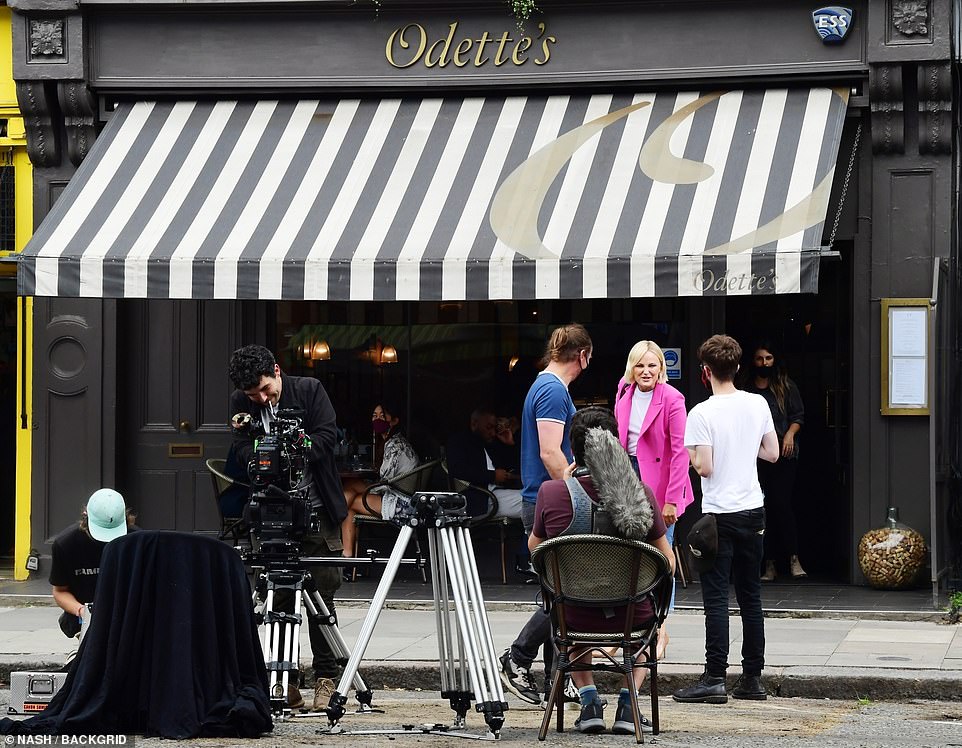 Behind the scenes: Both Malin and Caroline were spotted working on the film set on Friday, which had been set up outside of Odette’s Restaurant in Primrose Hill, London 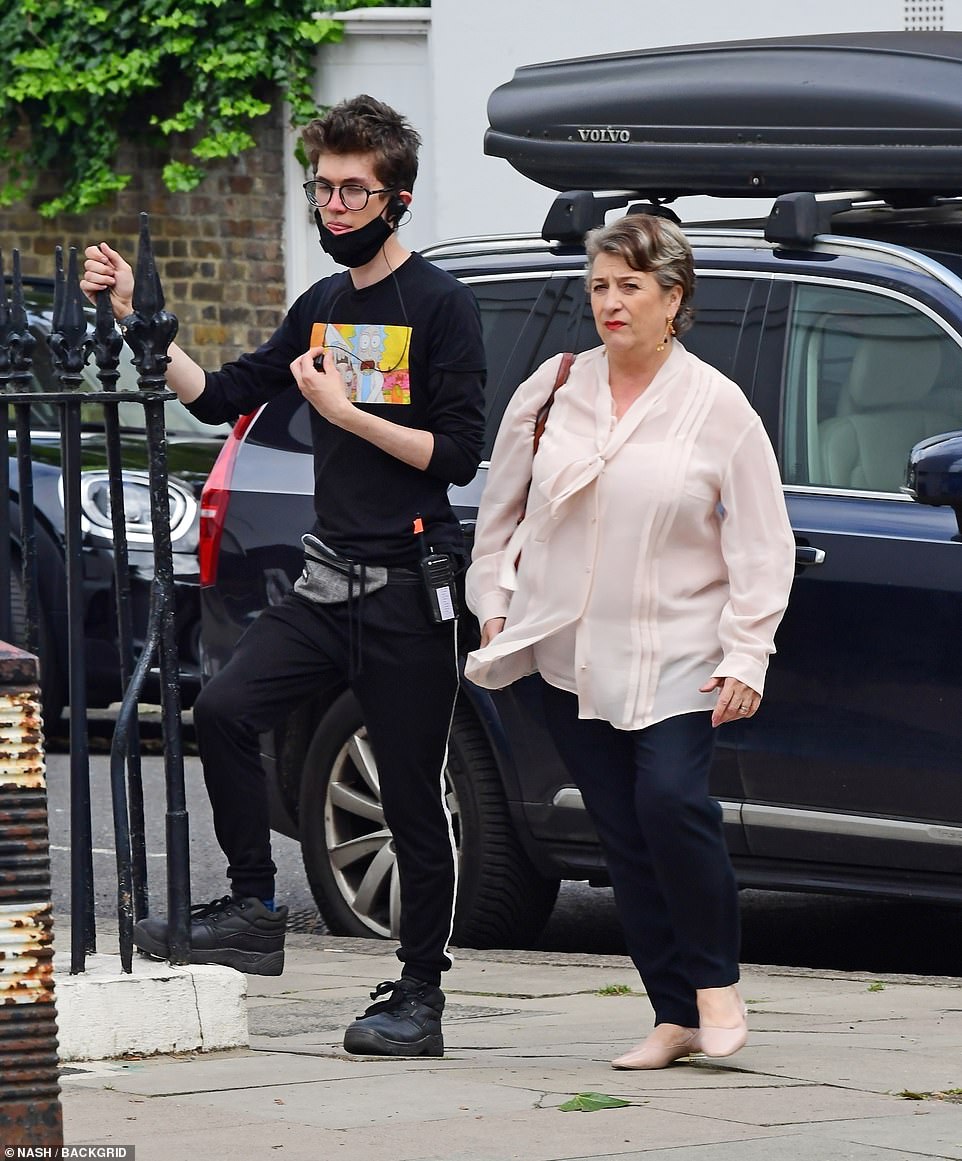 Waiting for her mark: At one point during the day, Caroline was stood to the side of the film set, alongside a member of the filming crew, who had a radio attached to his hip

Speaking about the movie, Deadline reports that director Martinez said: ‘This is the moment to honour the experiences of the strong female characters that surround us in real life by telling their stories in an authentic way.

‘Now is the time for women and their powerful relationships to be at the forefront of filmmaking.

‘St Kitts and Nevis has a magic about it that inspires transformation, so I am delighted that Malin and Connie are joining me on this journey. It’s emotional, romantic, empowering and set on a beautiful tropical island.’

Their appearance together comes after Malin celebrated her second wedding anniversary with her husband earlier this year. 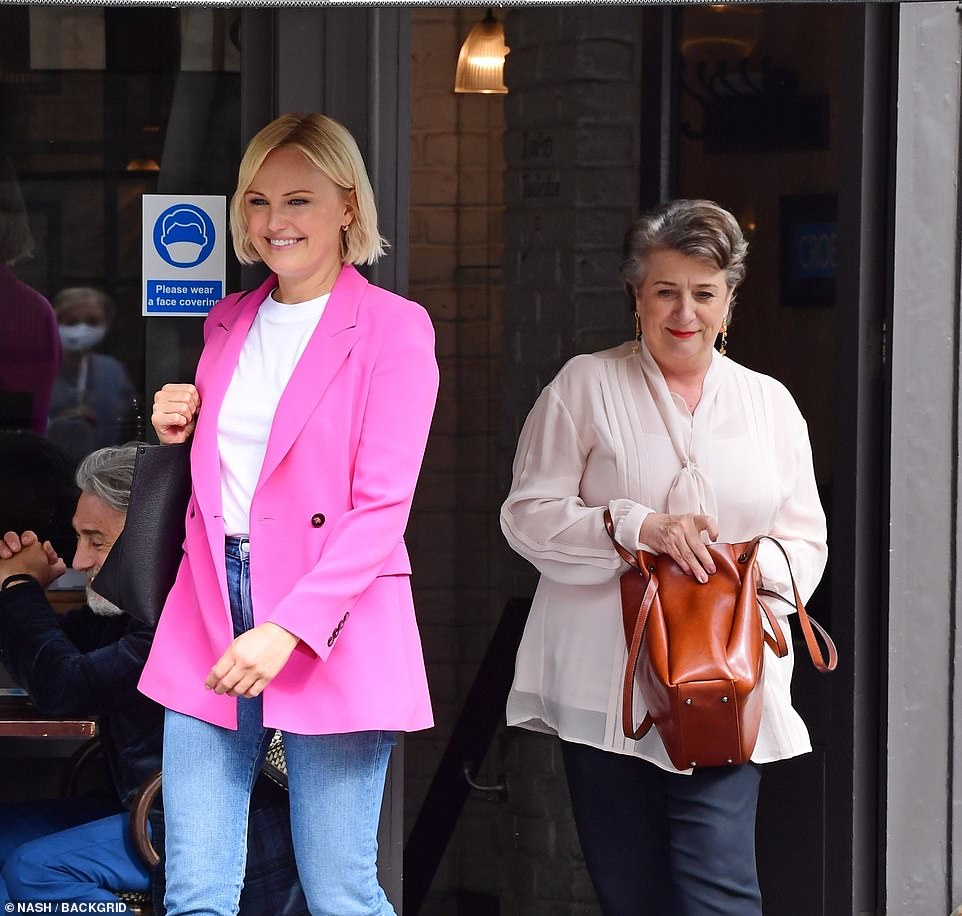 Accessorising: Both women were seen carrying large leather handbags with them. Malin opted for black leather, while Caroline had a brown-coloured bag

On the move: Malin looked sensational on the film set, with her vibrant hot pink jacket standing out, while Caroline looked classy in her more subdued ensemble 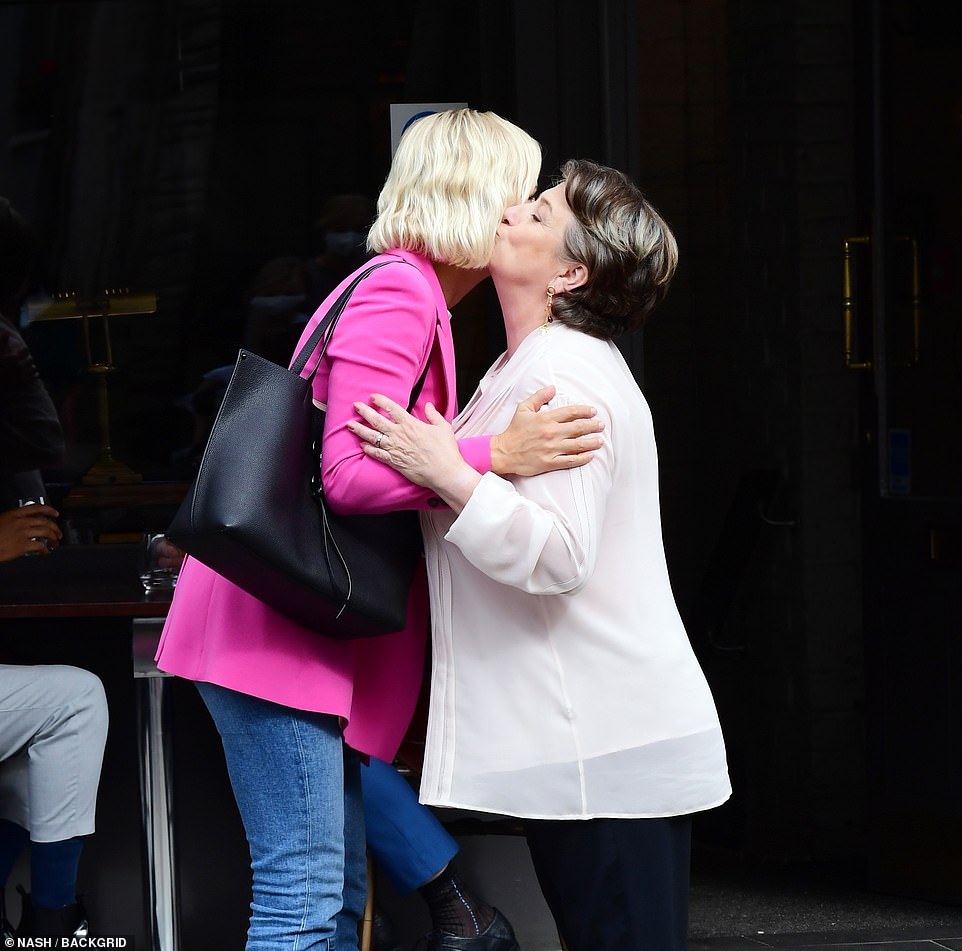 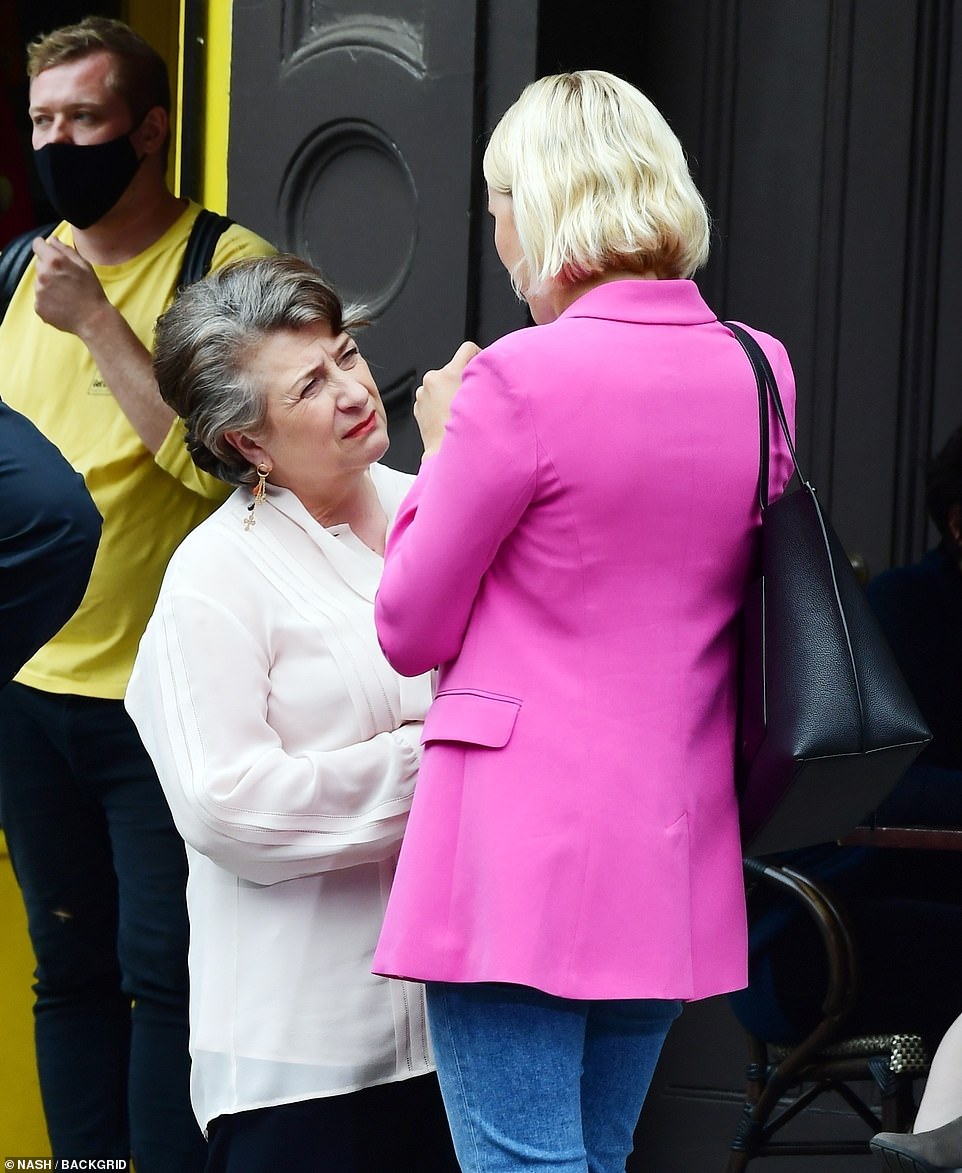 Discussing their roles? Both malin and Caroline could be seen entering into deep conversation during their time together on the film set

The Swedish-American actress, who was raised in Canada, recently shared a celebratory photograph on Instagram with husband Jack Donnelly back in February.

The happy couple exchanged vows in a ceremony at the Mexican resort of Tulum in 2018.

Donnelly is close to Akerman’s son and the blended family is often seen on trips together, including a snowy getaway last month for Valentine’s Day.

The beauty shared a sweet snap from the trip on her Instagram showing the trio making their way up a ski lift.

‘A perfect VDay for three. Sending love to you all from the great outdoors,’ she captioned the photo along with the hashtags ‘happy’ and ‘valentinesday.’

The crew sported their best skiwear as they shouted with joy on their way up the mountain. 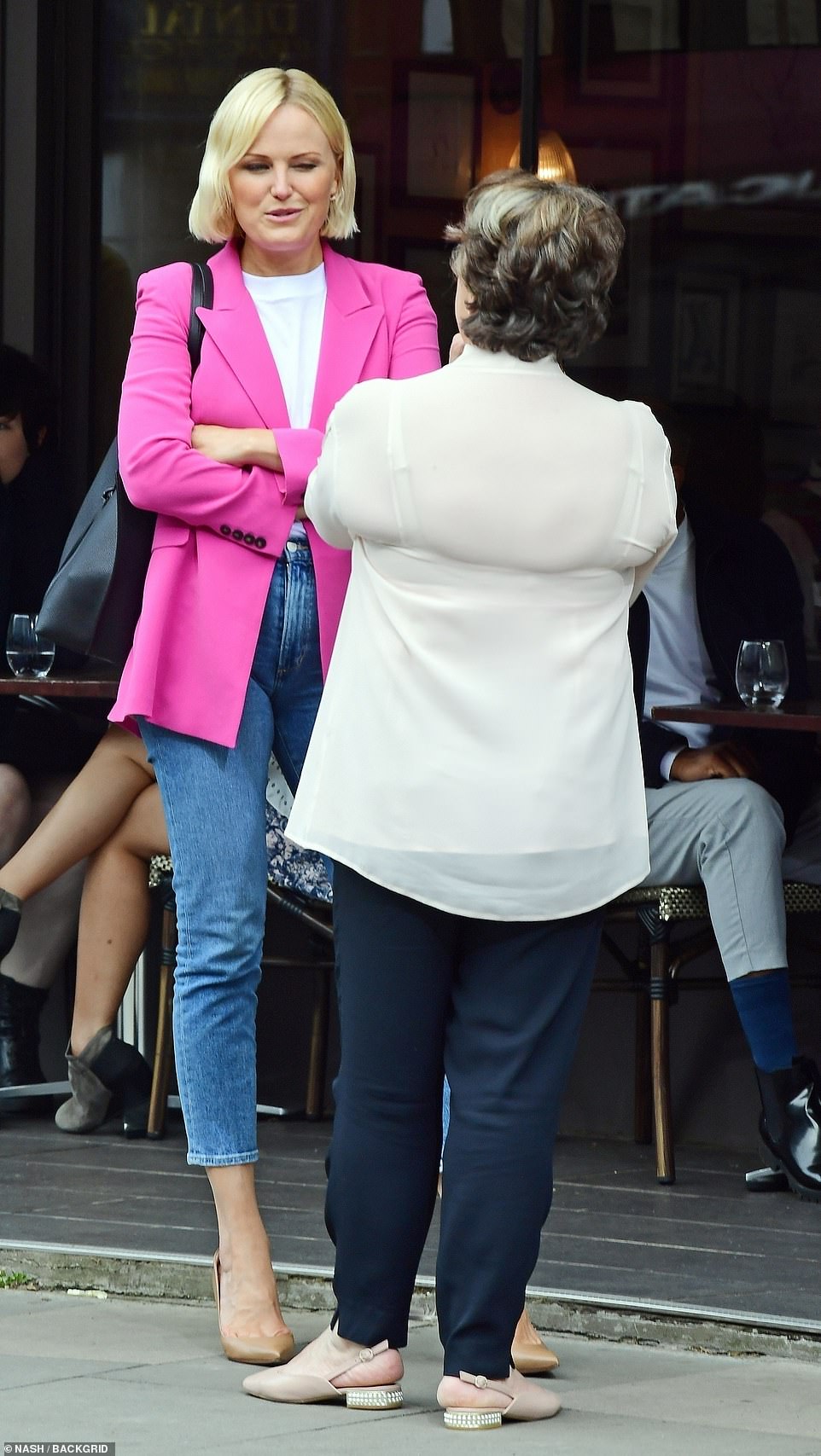 Cheeky smile: There appeared to be a good level of chemistry between the two actresses as they chatted amongst themselves on the set 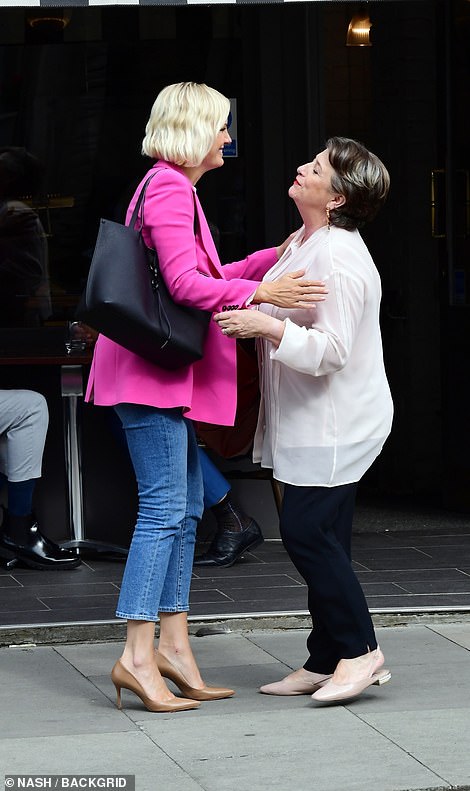 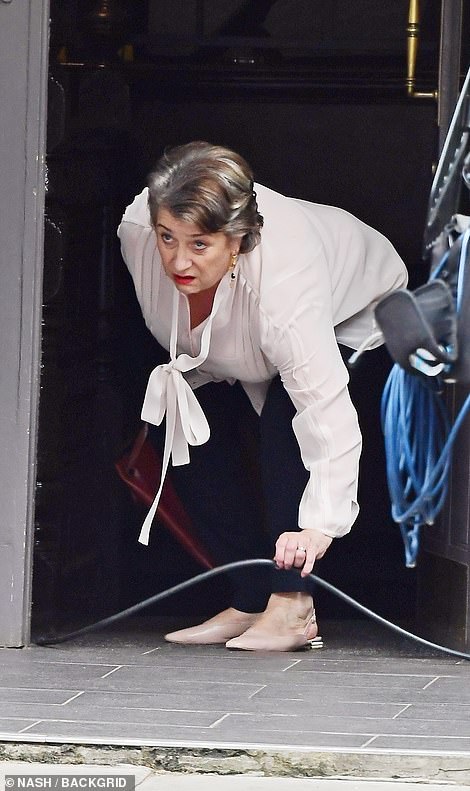 On the street: Both women were seen embracing each other on the pavement outside of the restaurant in Primrose Hill 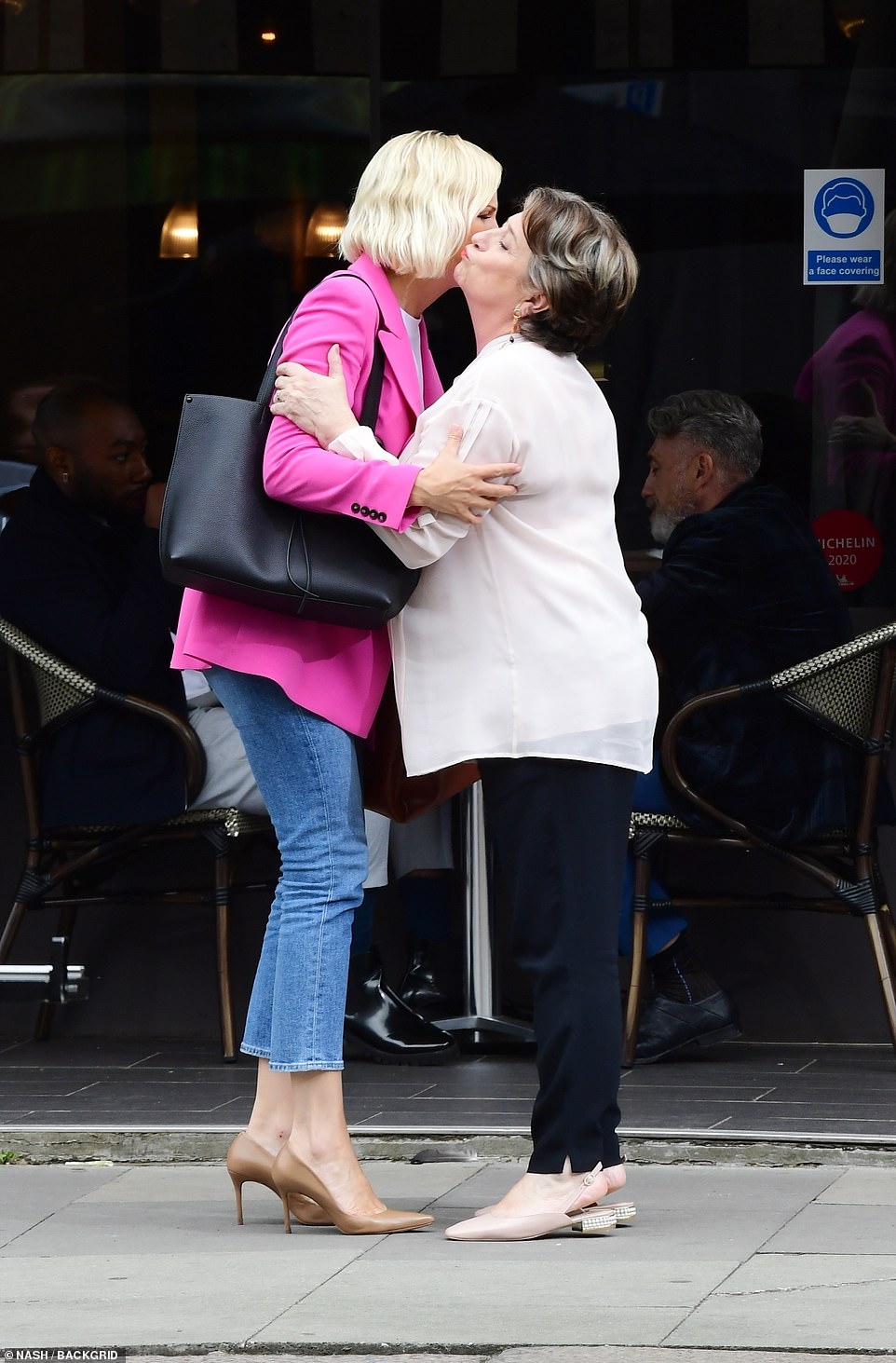 A Week In Paradise: With Malin having added extra height to her ensemble with a pair of heels, Caroline was forced to stand on her toes to peck her on the cheek