Thomas Markle quizzed on his son’s comments on Meghan Markle

Thomas spoke about his desire to meet two-year-old Archie Harrison and Lilibet ‘Lili’ Diana, born in June, and make up with his estranged sister Meghan. In an interview, the 55-year-old window fitter from Oregon said he had “made some horrible mistakes” and be ready to ask his sister for forgiveness.

Speaking to Australian magazine New Idea, Thomas said: “I don’t need a photo-op to go see my sister, and I don’t want a story behind it.

“I don’t want anything, I would just love to go over to their home and knock on the door, give her a big hug and kiss, and say I missed the hell out of her and apologise right to her face … maybe one day that will happen.

“I’d do anything to see Archie and Lilibet.”

Thomas wrote a letter addressed to Prince Harry in April 2018 in which he warned him against marrying Meghan. 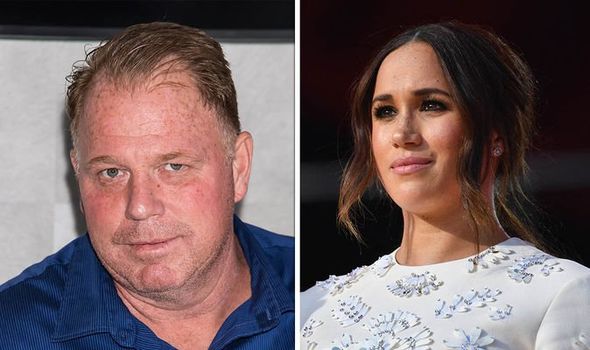 During the interview, Thomas also said he hopes Meghan will watch him on Australia’s Big Brother so she can see “the real me”.

The 55-year-old, who shares with Meghan the same father, Thomas Markle Snr, recalled Meghan and Harry announcing their engagement in November 2017.

Explaining he didn’t know how to manage the new popularity he achieved as a relative of Meghan almost overnight, Thomas said: “I was thrown to the wolves with the popularity and the media with no experience.

“I was being backed into a corner, into a wall.

“I made some horrible mistakes and still regret them to this day.

“But filming Big Brother, I mean, my God, I mean, I got so much out of that personally, on a spiritual level, clearing the dust away, the bad clouds, the bad energy, and it turned into the most amazing, positive experience to undo all the bad.”

Thomas, who also has another sister named Samantha, is believed not to have seen or spoken to Meghan for years.

Meghan and Harry got married in May 2018 at St George’s Chapel in Windsor.

Meghan’s only relative in attendance was her beloved mother Doria Ragland.

Her father Thomas had also been invited, but he had to pull out of it after suffering from a heart attack.

As a consequence, Meghan entered the chapel alone was walked down the aisle by her father-in-law Prince Charles.

Three years after their marriage, Meghan and Harry have stepped down as full-time working royals and relocated to Santa Barbara in California with their two children.

Meghan Markle and Prince Harry got married in May 2018 (Image: EXPRESS)

Even after they moved across the pond, Meghan and Harry released a few images of their firstborn.

During their landmark interview with Oprah Winfrey in March, Archie was shown in black-and-white footage playing on a beach with the Duke.

On his second birthday, on May 6, Meghan and Harry shared a sepia-coloured photograph on the website of their organisation Archewell as part of a fundraising appeal for COVID-19 vaccine equity.

On the other hand, Meghan and Harry have yet to share with the public a snap of their daughter Lili.

The baby was born on June 4 at a Santa Barbara hospital.

After her birth, Meghan and Harry took a few weeks off to spend time with their new family of four.

They returned to work in September, when they undertook a whirlwind public tour of New York.