Melissa Gorga was seen relaxing poolside with her husband, Joe, in a sizzling snap that was shared to her Instagram account on Friday morning.

The 42-year-old Real Housewives Of New Jersey cast member appeared to be soaking up the sun as she and her 41-year-old spouse stayed close while they sat together on a wicker lounger.

‘Summa time ☀️ My Shore House is my happy place. How amazing is this boat lounge bed?!’ said the Bravo beauty. 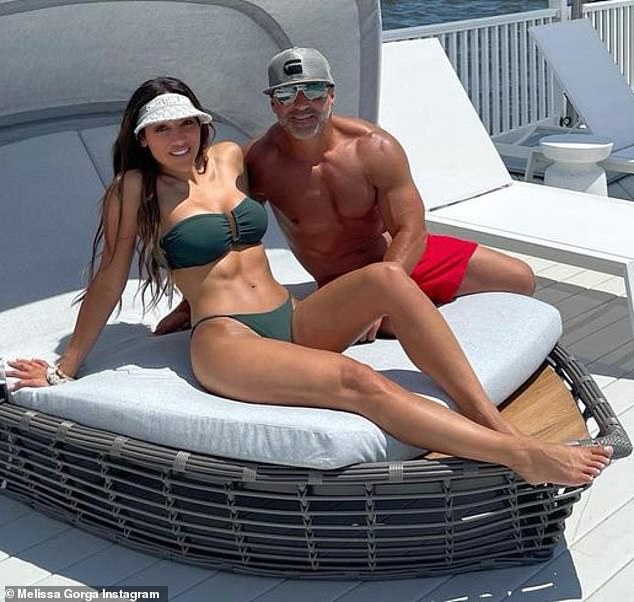 Fun in the sun: Melissa Gorga was seen showing off her bikini body while relaxing with her husband, Joe, in a sizzling summertime snap that was shared to her Instagram account on Friday morning

Gorga was dressed in a strapless dark green bikini top that accentuated her toned arms and showed off all of her impressively toned tummy.

She paired her top with a matching bottom that placed an emphasis on her immaculately sculpted thighs and tanned legs.

The entrepreneur also sported a white visor that held back her flowing brunette hair, much of which fell onto her right shoulder and backside during the pool day.

Joe opted for a pair of bright red trunks, as well as a pair of reflective sunglasses and a gray baseball cap as he spent time with his wife. 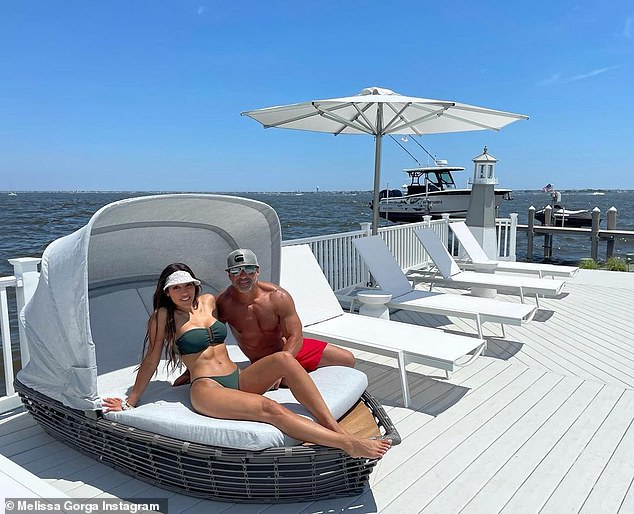 Shapely: Gorga was dressed in a strapless dark green bikini top that accentuated her toned arms and showed off all of her impressively toned tummy. She paired her top with a matching bottom that placed an emphasis on her immaculately sculpted thighs 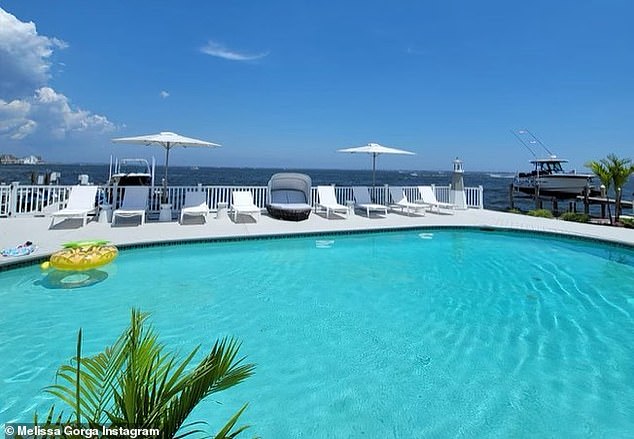 Scenery: The Real Housewives Of New Jersey cast member also shared a duo of pictures to show her 2.3 million fans the poolside views that she and her husband enjoyed

Gorga also shared a pair of shots to show her 2.3 million followers the views that she and her husband had as they took in the pleasant summer weather.

The reality television personality has become well-known for sharing shots of her toned physique to her Instagram account.

Earlier this year, she shared a duo of selfies that had been taken on a boating excursion, and she sported a patterned black-and-white bikini top that left little to the imagination of her followers. 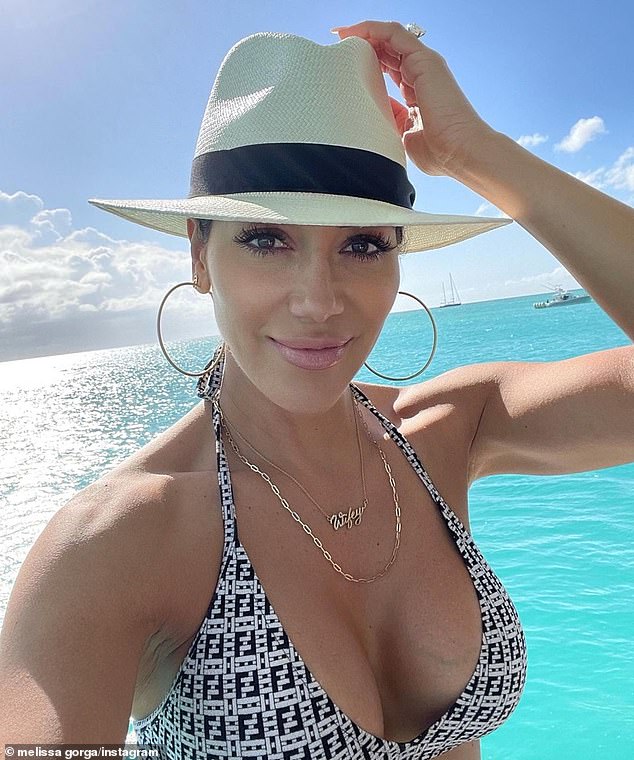 Showing off: Gorga has become well-known for sharing sizzling snaps of her taut and toned physique to her Instagram account

Gorga also sported a wide-brimmed hat and several articles of jewelry, including a gold chain that featured a nameplate that read ‘wifey.’

In April, she was seen wearing an eye-catching neon pink Versace bikini top and a matching bottom while sitting on the side of a vessel.

Her flowing locks contrasted well with the bright shade of her outfit, and she also donned a stylish pair of black sunglasses for the trip. 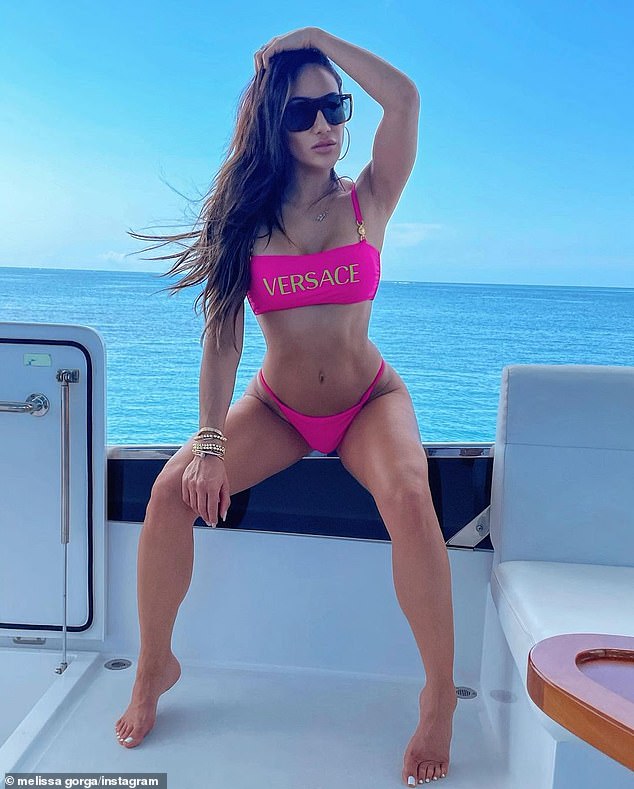 On the water: Earlier this year, the reality television personality was seen posing on the side of a boat while wearing a Versace bikini top and a matching bottom

On Thursday, Gorga and her husband were featured in several photos that were shared to Teresa Giudice’s Instagram account.

The first shot showed the restaurateur dressed in a much more toned-up outfit, as she wore a black and sleeveless button-up blouse that was tucked into a pair of patterned shorts, as well as a set of high-heeled shoes.

Her 49-year-old sister-in-law wore a flowing red dress that exposed her chiseled arms and contrasted well with the beautiful brown shade of her hair. 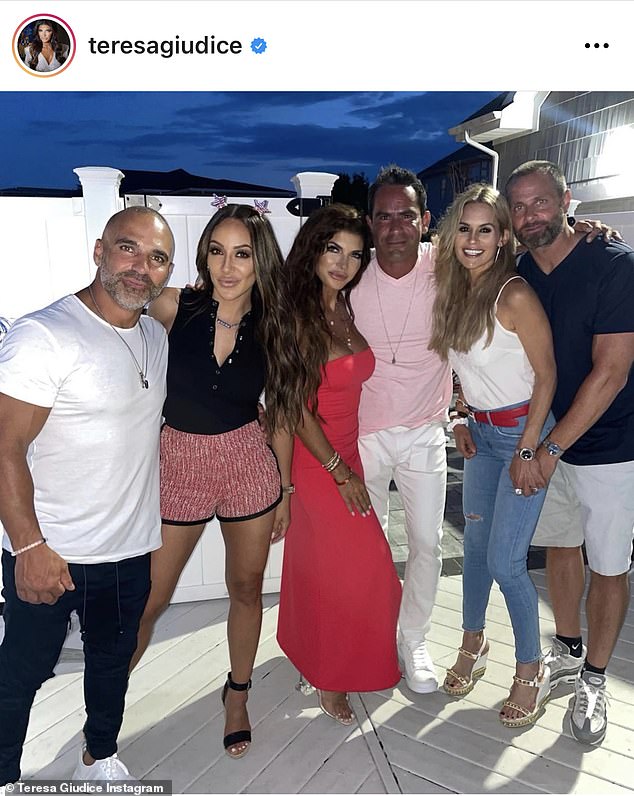 Better with friends: Gorga and her husband were featured in several shots that were shared to the Instagram account of her sister-in-law, Teresa Giudice 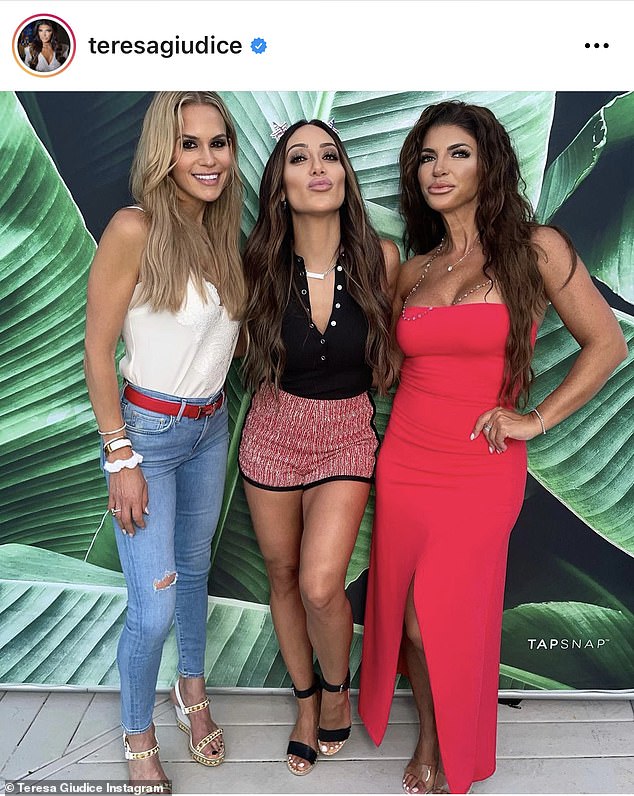 Staying together: One of the entrepreneur’s photos showed her spending time with both Gorga and their RHONJ castmate, Jackie Goldschneider

Both Gorga’s husband and Giudice’s boyfriend, Louie Ruelas, opted for t-shirts, slim-fitting pants and white sneakers for the photoshoot.

One of the Real Housewife’s other shots showed the couples spending time with their castmate, Jackie Goldschneider, and her husband, Evan.

The second-to-late photo showed the RHONJ cast members spending time together while posing for a snap, and the final one featured the sisters-in-law staying close as they hammed it up for the camera.

Giudice’s message in the post’s caption simply read: ‘July 4th celebrations,’ which was followed up by an exploding emoji. 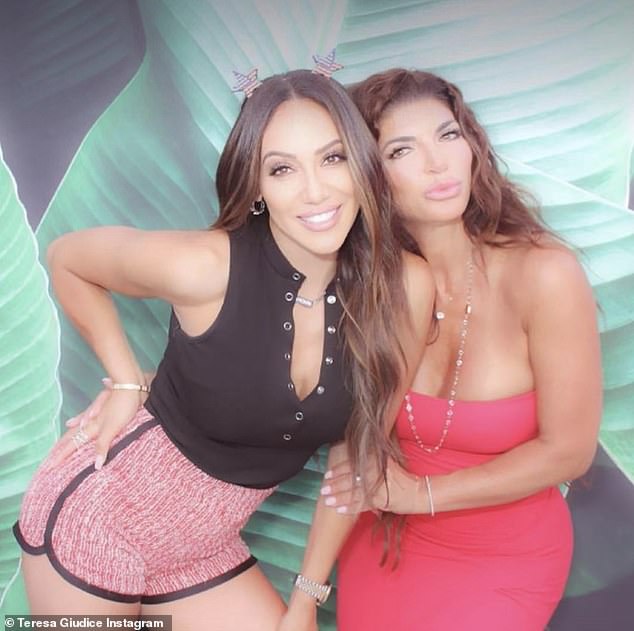 Good times: Giudice’s final shot showed her getting close to Gorga while making a kissy face