Former Home and Away star Orpheus Pledger has escaped with a virtual slap on the wrist after being sprung with the deadly drug ice – as court told of a mysterious incident from his past where he was forced to apologise to his victim.

On Tuesday, Pledger was not even required to front up to a virtual court link in Covid plagued Melbourne where the buffed actor was dealt with as a first offender despite previously being dealt with by the court.

The Melbourne Magistrates’ Court heard the 28-year old had been charged as a 21-year old over a nasty incident that saw him forced to apologise to his victim and undergo an anger management program. 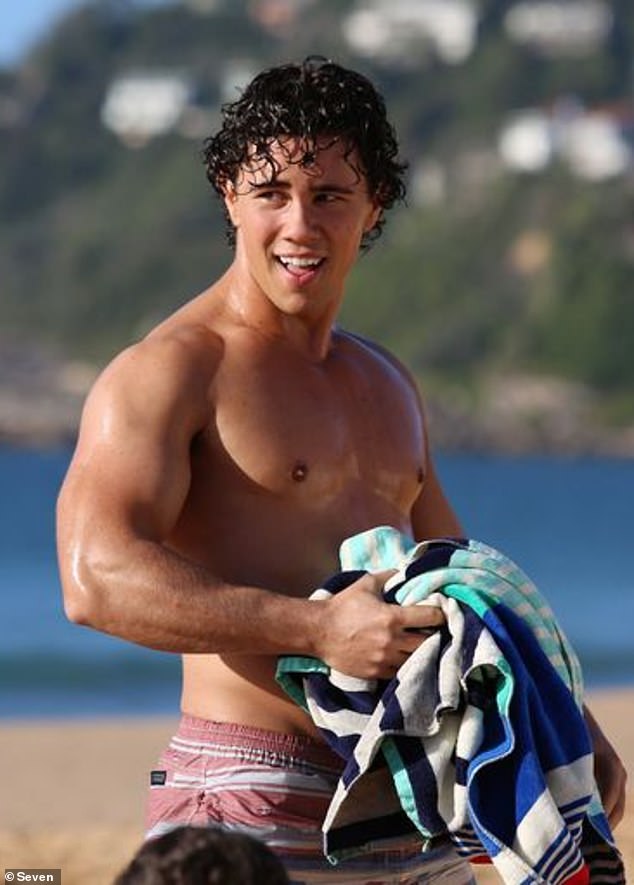 Pledger’s Home and Away character Mason Morgan (left) was killed off in the 2019 season finale. He was caught by uniformed police allegedly in possession of meth. 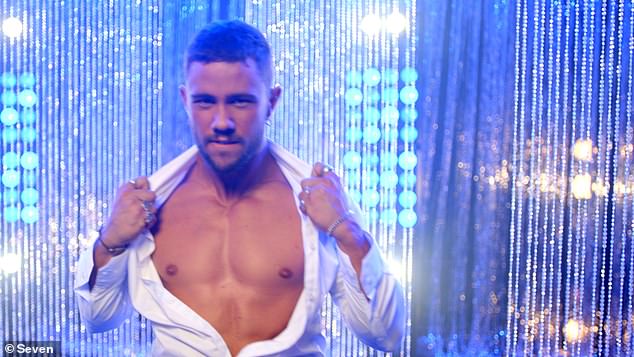 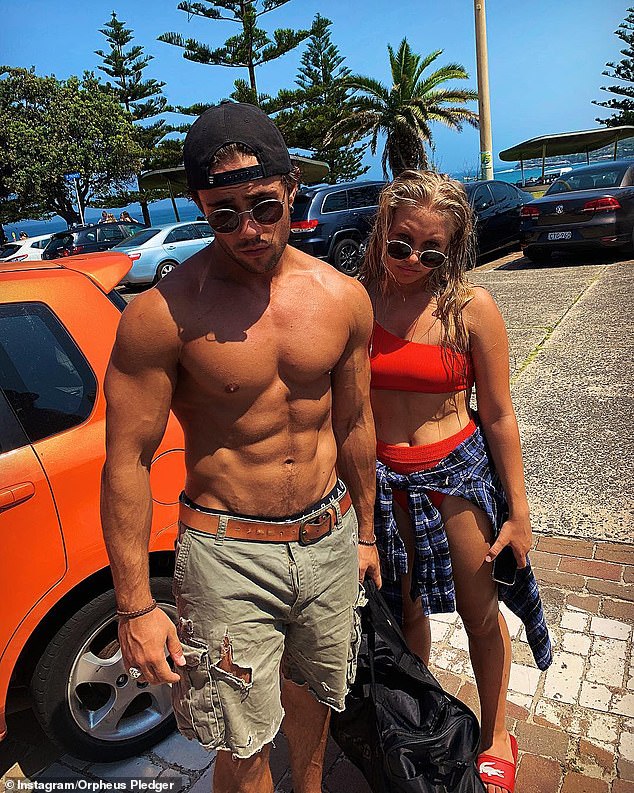 Pledger quit Home And Away in 2019 after deciding he wanted to pursue a career in music. He is pictured here with his former co-star Olivia Deeble

The circumstances around that offence remain largely unknown after the court was unable to turn up the details.

Instead, Magistrate Tim Bourke heard he had been placed on the court’s diversion program, asked to donate $150 to the court fund, complete an anger management program and write an apology to his victim.

Under Victorian law, diversion plans are often handed down to first-time offenders and are designed not to impact on a person’s life going forward.

Pledger got lucky on Tuesday after Mr Bourke agreed to place Pledger on yet another diversion program despite his prior offending.

Pledger had admitted to possessing a little over half a gram of meth and 30 Diazepam tablets.

Police arrested him on February 19 in Prahran – just outside of Melbourne’s CBD – after they found him sitting in the driver’s seat of his BMW.

Pledger had appeared under the influence of drugs and slurred his speech as he attempted to answer questions.

A search of his car revealed a baggie of meth and a bottle of the prescription medication, which did not have a label.

Pledger had tried to claim the pills were his brother’s, but the officers didn’t swallow his lie.

The actor was so trashed upon being taken back to the police station that police were unable to interview him.

Under the diversion plan, Pledger was not required to formally plead to the charges and instead simply made admissions to the charged offences.

His lawyer, Carmela Pezzimenti, told Mr Bourke the only details the court had of his prior offences were provided by Pledger himself.

‘Unfortunately the summary wasn’t available … and so it simply came down to what the memory of my client was,’ she said.

‘I also spoke to my client’s mother, who was also present in court when that took place.’ 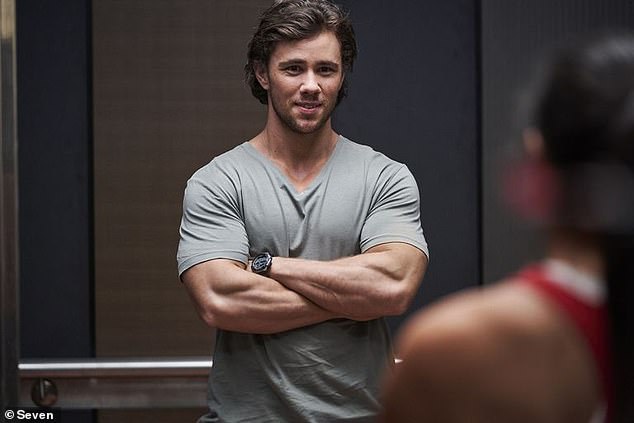 Pledger appeared in court via videolink with his cat 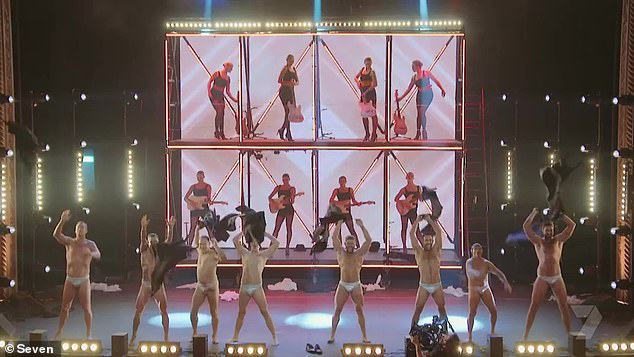 Pledger in Channel 7’s The All New Monty: Guys & Gals

LIFE AND TIMES OF HOME AND AWAY HUNK

2011: Pledger joined the cast of Neighbours as student Noah Parkin in a recurring role.

2015: Pledger joins Home and Away as Mason Morgan.

2019: His character is killed off and he announces a new career in music.

Ms Pezzimenti said Pledger likely had a defence to that charge in 2015, but had accepted the diversion because he was unrepresented by a lawyer and police had ‘steamrolled’ the process.

In May, MasterChef’s Ben Ungermann was placed on an undertaking of good behaviour and told make a $1000 donation to White Ribbon Australia after being placed on a diversion plan over an assault charge.

Unlike Pledger, Ungermann was forced to fly to Melbourne from his home in Queensland to face the magistrate in person.

Mr Bourke said he would grant Pledger another chance at diversion due to his previous offence being six years old and it being of a ‘different style’.

‘Conditions of diversion will in actual fact assist in the rehabilitation of Mr Pledger,’ he said.

Mr Boorke ordered Pledger undertake a drug awareness course, write a letter of gratitude to the officer who busted him and pay $150 to the court fund.

He must also be of good behaviour for the next six months or else find himself back before the magistrate.

Daily Mail Australia revealed in July how Pledger had wound up on the wrong side of the law.

His life had been on a ‘downward spiral’ before he was charged with carrying the deadly drug ice. 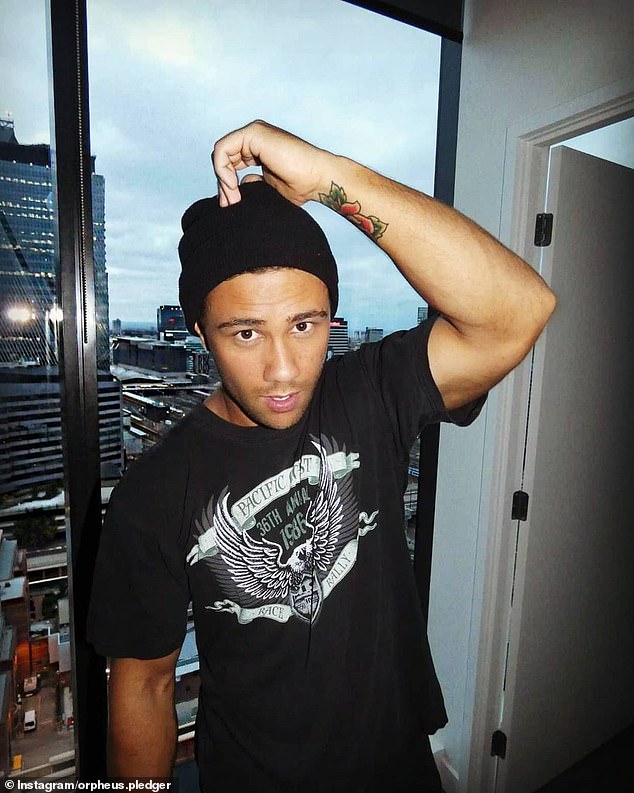 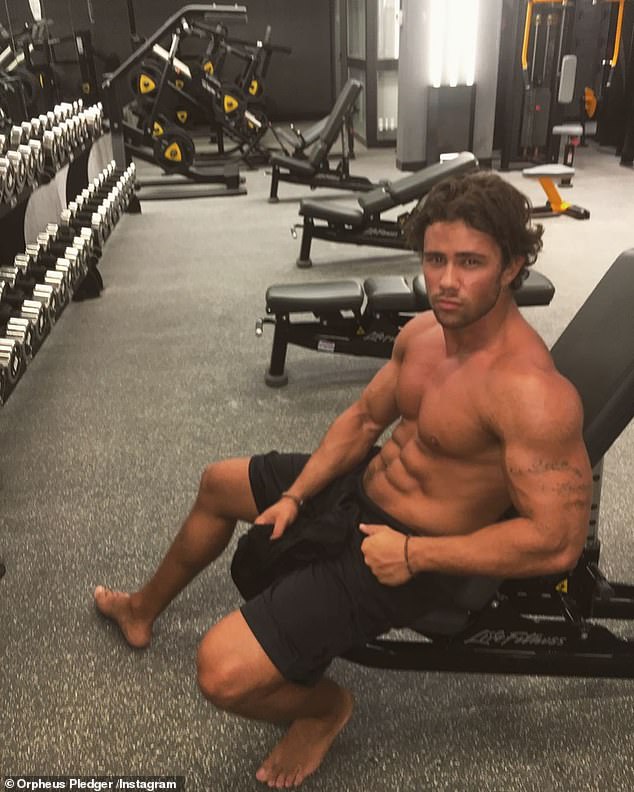 A chiseled Adonis on the outside, Pledger allegedly set off alarm bells late last year while in Sydney filming Channel 7’s The All New Monty: Guys & Gals.

A glorified strip show, Pledger appeared to relish his time getting his gear off on camera for his adoring fans.

His Home And Away character had been killed off in 2019 and Covid had seen Pledger reinvent himself as an Instagram star and part-time music producer.

In October last year, he made headlines when he announced a new love interest and Pledger was reportedly ‘the most happiest’ he’d been in a long while.

But in June he raised eyebrows when he revealed a lot more than he bargained for while filming himself in the shower.

Pledger briefly exposed his manhood in the raunchy clip.

He had been showing off his jacked physique before stepping out naked and preening in front of the bathroom mirror.

While laughed off at the time as a playful mishap, Daily Mail Australia has been told those closest to Pledger held deep concerns for his welfare.

At an earlier court appearance via videolink, Pledger asked the magistrate to ‘be gentle’ on him.

In a bizarre court appearance in July, the actor was seen sucking from a vape and stroking a black cat.

A source close to Pledger, who asked to remain anonymous, told Daily Mail Australia the actor had been struggling since leaving Home And Away in 2019.

‘Orpheus has been exerting this problematic behaviour for a while, since he relocated back to Melbourne after his character was killed off,’ the source said.

This increasingly unpredictable and worrisome behaviour continued with his split from his partner late last year, sources said.

Little has been seen on the actor’s Instagram page since the charges went public in July.