He’s the friend of the royals who’s become an arbiter of everything that should be avoided by those wishing to mix in polite society.

And now interior designer Nicky Haslam has helpfully compiled a list of the most vulgar aspects of post-pandemic life.

Under the headline, Even More Things Nicky Haslam Finds Common, two things he finds most vulgar are associated with the Duke and Duchess of Sussex. 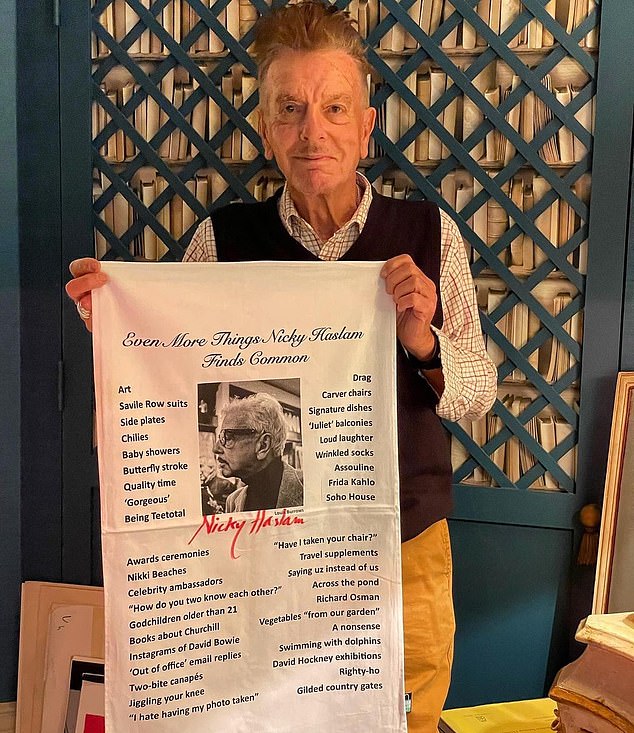 The first is ‘Baby showers’, that American import where a party is held to ‘shower’ a pregnant woman with baby gifts ahead of her child’s birth.

Although they usually last just an afternoon, Meghan flew to New York on a private jet for her two-day event, with Amal Clooney and Serena Williams among the guests. ‘They’re a terrible idea,’ Haslam tells me.

‘Awful. In the old days, people didn’t shout about it and just kept quiet until the baby was born.’

The second is ‘Soho House’, Harry and Meghan’s favourite chain of private members’ clubs where they had their first date. ‘They all look the same,’ Haslam declares. ‘There’s nothing special about them at all.’

But why has he included BBC star Richard Osman, the Pointless host turned best-selling author?

‘He’s everywhere,’ Haslam sniffs. ‘He’s on every time I switch the TV on.’ 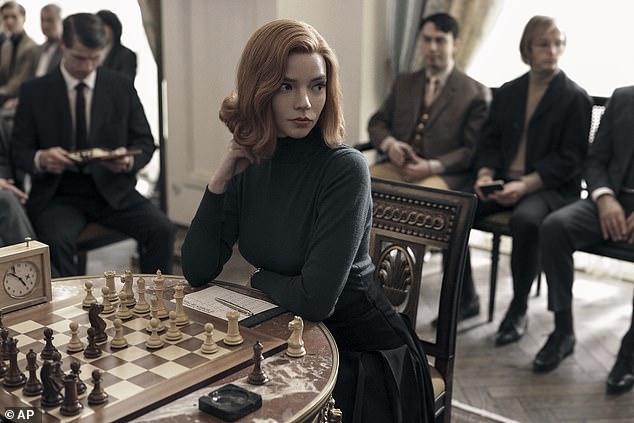 She played a brilliant woman who beat every man she encountered at chess, but Anya Taylor-Joy still faces whingeing from the ‘wokes’ for being ‘too sexy’ in The Queen’s Gambit.

Now, celebrated screenwriter Allan Scott who helped create the series, has hit out at critics complaining that she was too attractive while portraying a drug addict having a mental breakdown.

‘Have you heard a lot of people are calling The Queen’s Gambit sexist?’ he asks me at a Catholic Herald drinks party at Brown’s Hotel in Mayfair supported by CCLA.

‘It’s complete bulls**t. It’s a show about a woman being better than a man.’ Checkmate to Allan Scott?

Inconvenient truth is Emma’s bra was the star 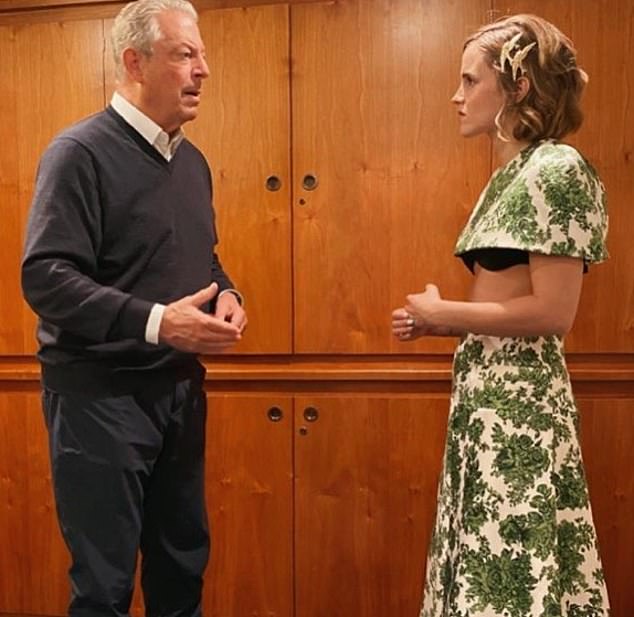 Harry Potter star turned ‘activist’ Emma Watson got people talking when she met environmental campaigner Al Gore this week — but not for the reason she’d hoped.

Emma, 31, was interviewing the former U.S. vice-president and maker of An Inconvenient Truth eco film, 73 — whom she describes as her ‘hero’ — about climate change, only to later discover her outfit had stolen the show.

She wore a bespoke green, floral two-piece by royal favourite Emilia Wickstead. But when the designer posted a picture online, critics quickly noted Emma’s black bra was showing underneath.

‘Is there a portion of the dress missing?’ asked one. Another wrote: ‘If this were a real business meeting, this would be highly inappropriate and no one would take her seriously.’

Emilia says: ‘It was an honour to dress Emma.’

The Earl of Bradford’s wife has broken her silence on their marriage split. Last week, I disclosed that the restaurateur Earl, Richard Bridgeman, was being divorced by the Countess, who is an obstetrician known as Dr Penelope Law at London’s private Portland Hospital, after 15 years.

‘Bringing our marriage to an end has been terribly hard for me, but circumstances have arisen, which I intend to keep private, that have given me no choice,’ Penny tells me.

‘I have instructed Ayesha Vardag and Lois Rogers, of top divorce law firm Vardags, to represent me, and I am confident that they will obtain a fair outcome in due course.’

The Earl, 74, was devastated when his beloved first wife, Jo, abandoned him just days after their silver wedding anniversary.

Sir Mick Jagger’s parsimonious tendencies kicked in when he was required to add his voice to the Rolling Stones’ 1981 hit Start Me Up.

‘I had to try to drag Mick in to put the vocals on, which he didn’t really want to do,’ recording engineer Chris Kimsey says.

‘When he did the vocals he was so budget-conscious that we ended up in the Stones’ mobile [studio] in a railway warehouse on the periphery of Paris in winter.

‘It was so cold that when we did the handclaps you could see the breath coming out of everyone’s mouths.’

Cheers! Jodie in bid to save our local pubs 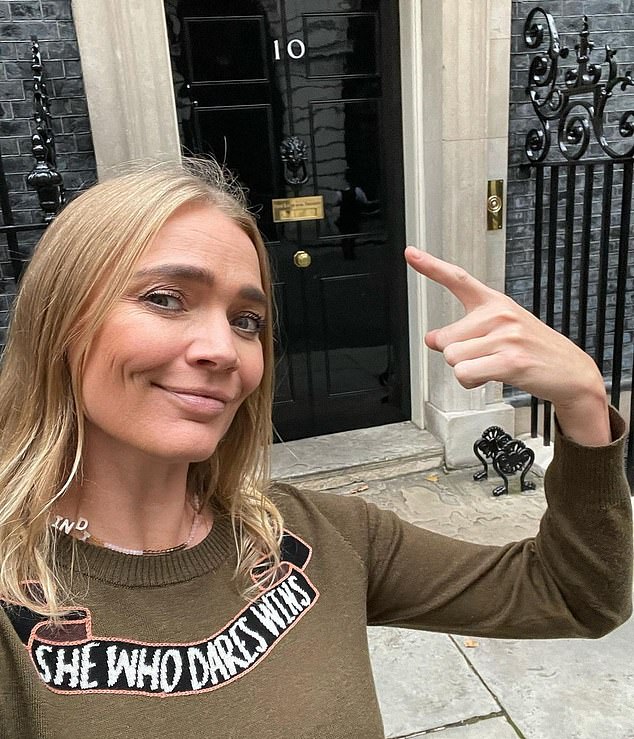 Jodie Kidd, who owns The Half Moon in West Sussex, visited No 10 wearing a £185 jumper with the apposite slogan: ‘She Who Dares Wins’

Forget the catwalk. Society model turned pint-puller Jodie Kidd strutted down Downing Street instead this week to save Britain’s pubs.

The former Strictly star, who owns The Half Moon in West Sussex, visited No 10 wearing a £185 jumper with the apposite slogan: ‘She Who Dares Wins.’

Kidd, 43, says: ‘I was dropping in my petition for the Long Live The Local campaign, urging the Government to rethink its reform of Beer Duty, VAT and business rate taxes within hospitality.

‘After a year of lockdowns, severe trading restrictions and huge uncertainty, almost 2,000 pubs have gone for ever.’

Queen star Brian May’s wife Anita Dobson is learning that being married to an ageing musician is not all sex, drugs and rock ‘n’ roll.

The guitarist, 74, nearly died last year and Dobson wails: ‘Lockdown was dreadful, a nightmare that I wish never to go back to.

‘My husband had a heart attack, sciatica and a haemorrhage and suddenly I went from being a working actress to being a cleaner, cook and carer. Not a role I’m easily castable for.’

The former EastEnders star adds: ‘Even when Brian started to get better, there was this awful feeling of: ”Is this my life now?”’