Only three per cent of doctors think remote consultations are better for patients than face-to-face appointments, a major study has found.

Researchers at Cambridge University concluded the shift towards phone and video appointments is proving ‘disastrous’ for many patients.

They said online consultations ‘increased the risk of misdiagnosis and barriers to care’, and were particularly damaging for the elderly, poor and disabled.

Some 93 per cent of doctors agreed that remote appointments are worse than face-to-face for accurately assessing and diagnosing illnesses.

In the first study of its kind, experts evaluated the NHS’s ‘rapid move towards telemedicine’ — video or phone appointments — during the pandemic.

Researchers surveyed 1,340 rheumatology patients and more than 100 hospital consultations and GPs between April and July this year.

About one third of the patients had inflammatory arthritis and another third had the immune disease lupus, with many needed regular appointments for flare-ups.

Some 93 per cent of doctors said telemedicine was worse than face-to-face consultations for accuracy.

The study said that a lack of in-person examinations and tests meant ‘misdiagnosis and inaccuracies were frequently reported’.

Nine in ten doctors also said phone and video consultations are ‘worse than face-to-face for building a trusting relationship’ and only three per cent said they were better overall. 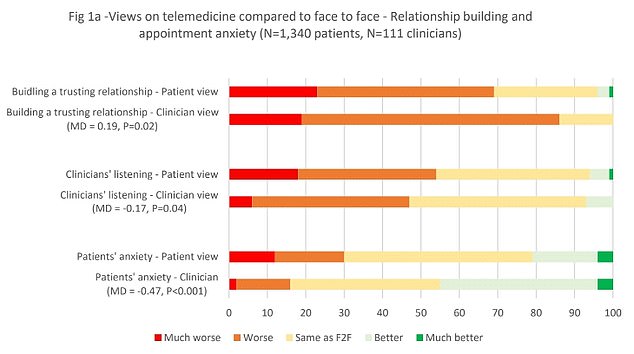 Researchers surveyed 1,340 rheumatology patients and more than 100 hospital consultations and GPs between April and July this year. The graph shows their views on how virtual appointments compare to in-person on relationship building and appointment anxiety. Nine in 10 clinicians and 69 per cent of patients felt telemedicine was worse than face-to-face for building a trusting relationship 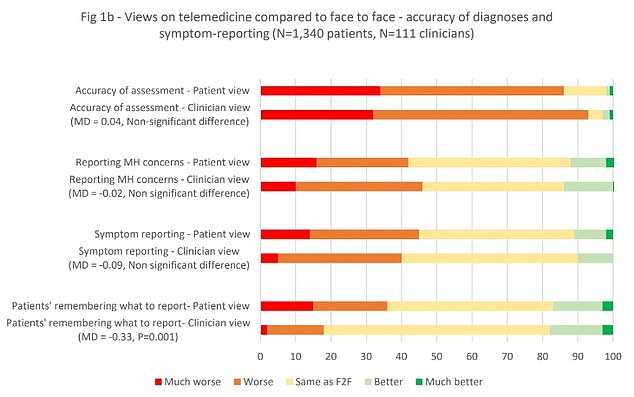 The researchers also asked patients and doctors about how virtual appointments impacted the accuracy of diagnoses and symptom-reporting. Some 93 per cent of doctors said telemedicine was worse than face-to-face consultations for accuracy 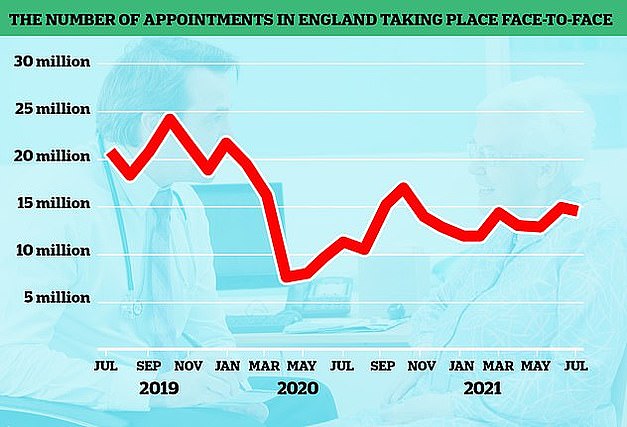 The number of GP appointments taking place face-to-face tumbled at the start of the pandemic when surgeries were told to see patients remotely where possible. But despite the country largely returning to normal, in-person visits are yet to climb back to pre-pandemic levels. The above graph shows the number of face-to-face GP appointments (red line) by month since the end of 2019

Patients calling their GP surgeries to book an appointment face waiting in a queue for up to an hour, according to a snapshot survey by the Daily Mail.

Some have been cut off on more than one occasion after waiting for more than ten minutes.

But in a stark illustration of the postcode lottery facing patients across the country, six out of ten practices surveyed answered in five minutes or less.

With demand for appointments returning to pre-pandemic levels, patients have struggled to get hold of their surgery by phone.

And when they do get through, frequently they will only be offered a telephone appointment rather than a face-to-face consultation.

A survey of 60 randomly-selected urban and rural surgeries across England conducted by the Daily Mail has found that almost one in five left callers waiting for 15 minutes or more.

Across England the average wait time was 8 minutes and 36 seconds, but 19 per cent of surgeries left callers waiting for 15 minutes or more.

The longest wait time was an hour and 19 minutes at a surgery in Kent.

It took 45 minutes to get through to a medical centre in Newcastle upon Tyne, while the third longest wait was 39 minutes at a practice in Lancaster.

On a more positive note, six out of ten practices answered in five minutes or less.

All calls were made after 9am – after the rush of patients seeking urgent appointments – and before 3pm.

Many practices play recorded messages to callers queuing, urging them to hang up and visit their website or call 111 for urgent medical advice.

But campaigners say elderly or disabled patients are more likely to struggle to access technology.

Meanwhile many patients said they felt like online appointments were like a ‘rushed tick-list’ and ‘perfunctory’, although 60 per cent said they were more convenient.

The damning report found it was particularly damaging and ‘unfair’ on the elderly, disabled and those who do not speak English.

The Daily Mail is campaigning for a return to face-to-face appointments as default.

Currently just 61 per cent of GP consultations are in-person, down from 80 per cent before the pandemic.

Today’s report highlights the stark concerns of many doctors about the pressures to shift to remote appointments, after NHS chiefs said one in four appointments should be over phone or video.

It said doctors ‘raised concerns that telemedicine may be over-used by the NHS and hospital management as a cost and time-saving measure, rather being than in patients’ best interests’.

They said one senior doctor ‘summed up the overall feelings of many’ stating that telemedicine ‘is perfect for some but disastrous for others’.

Lead author Melanie Sloan, from the Primary Care Unit at the University of Cambridge, said: ‘The pandemic has had a major impact on the ability of healthcare professionals to see their patients face-to-face, and this has led to a significant increase in the number of telemedicine consultations.

‘As the NHS develops a telemedicine strategy, we hope there will be a thorough assessment of the clinical and psychological risks and steps taken to mitigate those risks, as well as action to address the possibility of worsening existing health inequalities for those less likely to be able to benefit from remote consultations.’

Co-author Professor Caroline Gordon, from the University of Birmingham, added: ‘Some stable rheumatic disease patients can benefit from telemedicine but new patients, those with worsening symptoms or more complex conditions such as lupus, need quickly accessible, face-to face appointments to manage their conditions.’

Senior author, Dr Felix Naughton from the University of East Anglia, added: ‘Of greatest concern was the great variability in accessibility to care.

‘Approximately half of all patients felt they would not receive a prompt response when very unwell.’

The study, published in the journal Rheumatology, found many patients had ‘great difficulties in accessing support’ including struggling to get through to their GP. 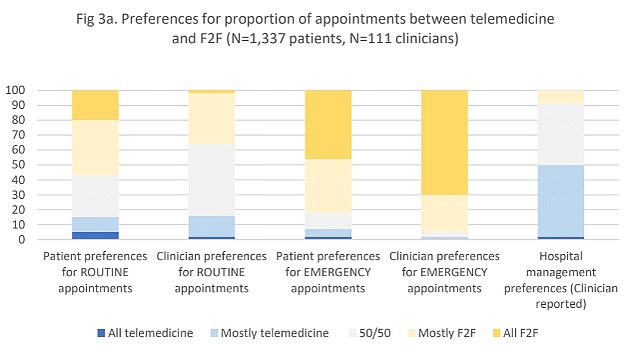 Overall, both patients and doctors preferred in-person appointments, but most participants supported a mixture of face-to-face and telemedicine. And significantly higher proportion of clinicians (70 per cent) than patients (46 per cent) wanted all emergency appointments to be face-to-face 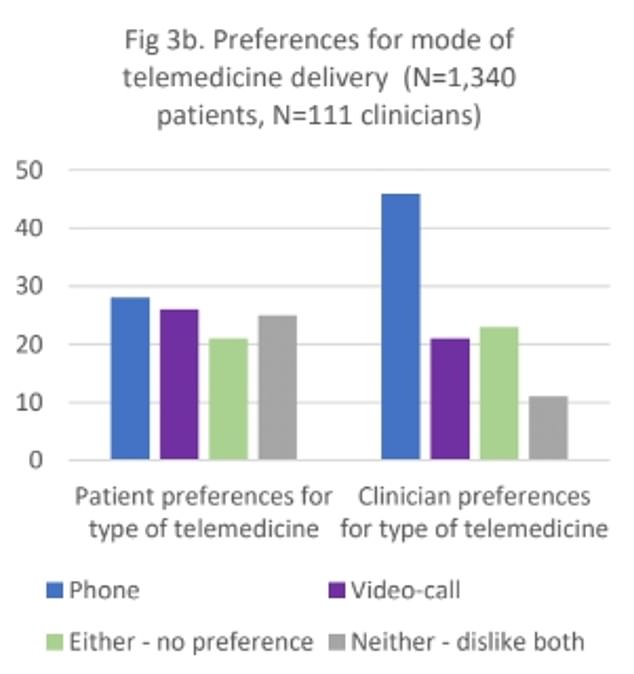 One patient said: ‘Waiting for a call back after four voicemails…feel sad and scared knowing that when I really needmedical help I have no-one.’

Another said: ‘My rheumatologist cannot see or hear how I move, look at my skin, eyes, hair, hands, bones, how I am…I was diagnosed with something over the phone, which I know isn’t right, and it’s getting worse.’

The Daily Mail has highlighted how the shift away from face-to-face GP appointments is having devastating consequences for patients.

Last month the Government and NHS chiefs unveiled a nine-point package of measures to tackle the problem.

The £250 million plan would mean doctors cannot deny a face-to-face appointment unless there is a good clinical reason, and name and shame surgeries which don’t deliver them.

But the British Medical Association has urged GPs to refuse to comply with the plan and is balloting members over industrial action to reduce their ‘unmanageable’ workload.