Paris Hilton was busy yachting off the Corsican coast on Sunday morning.

The 40-year-old socialite turned heads sporting a vibrant outfit as she danced around on the deck while taking in all that the shining Mediterranean sun had to offer.

The reality television personality also shared a set of videos that give her nearly 16 million followers a better look inside the luxury vessel. 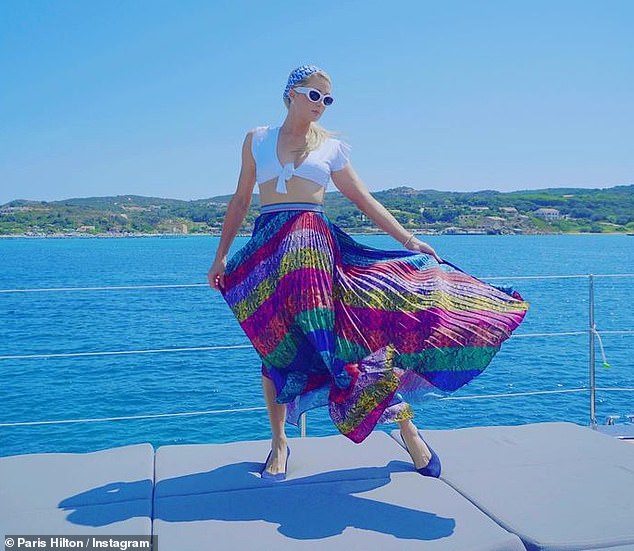 Soaking up the sun: Paris Hilton enjoyed her Corsican getaway in a series of stylish snaps on Sunday

Hilton wore a white crop top that showed off a slight portion of her toned tummy during her boating trip.

The designer also sported a vibrant and multicolored long skirt that flowed gracefully in the coastal breeze in all of the shots.

She sported a pair of deep blue high-heeled shoes and wore a stylish set of white-framed sunglasses while spending time on the water.

The model also wore a blue cap that covered the top portion of her beautiful blonde hair, part of which fell onto her left shoulder. 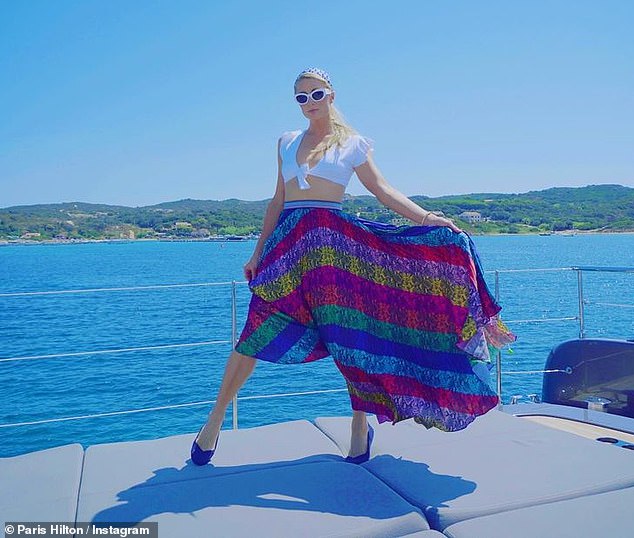 Ooh la la! The socialite sported a white crop top that showed off a slight portion of her toned tummy while spending time on a yacht 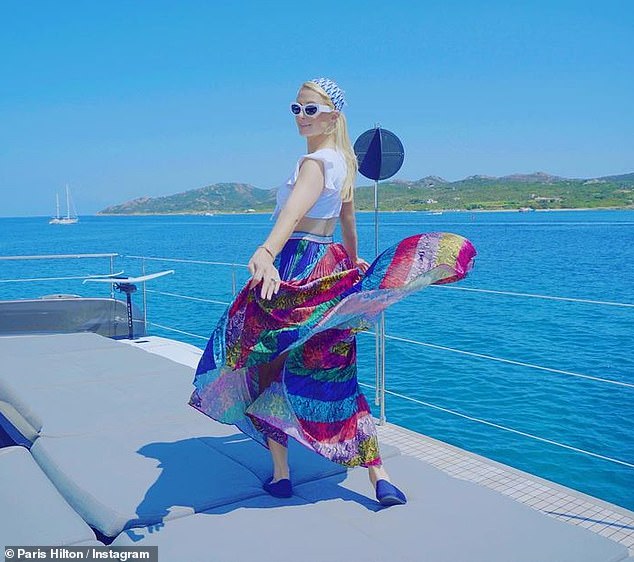 Hilton also wrote a short message in the post’s caption that read: ‘She is the gold at then [sic] end of the rainbow.’

The reality television figure went on to share s trio of videos to her Story, the first of which showed a side view of the yacht.

The socialite was then seen spending time with a male pal as they jetted off on a smaller vessel.

Her third clip showed an impressive view of the yacht’s amenities, including a lounge area that seemed perfect for soaking up the sun. 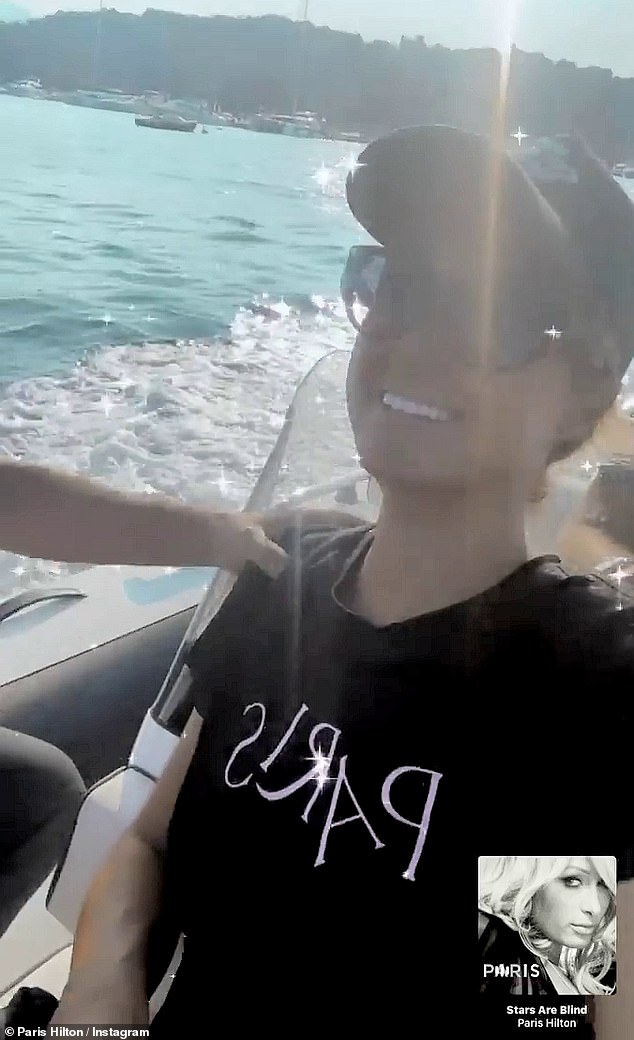 A better look: Hilton also shared a trio of videos from the boating excursion to her Instagram Story 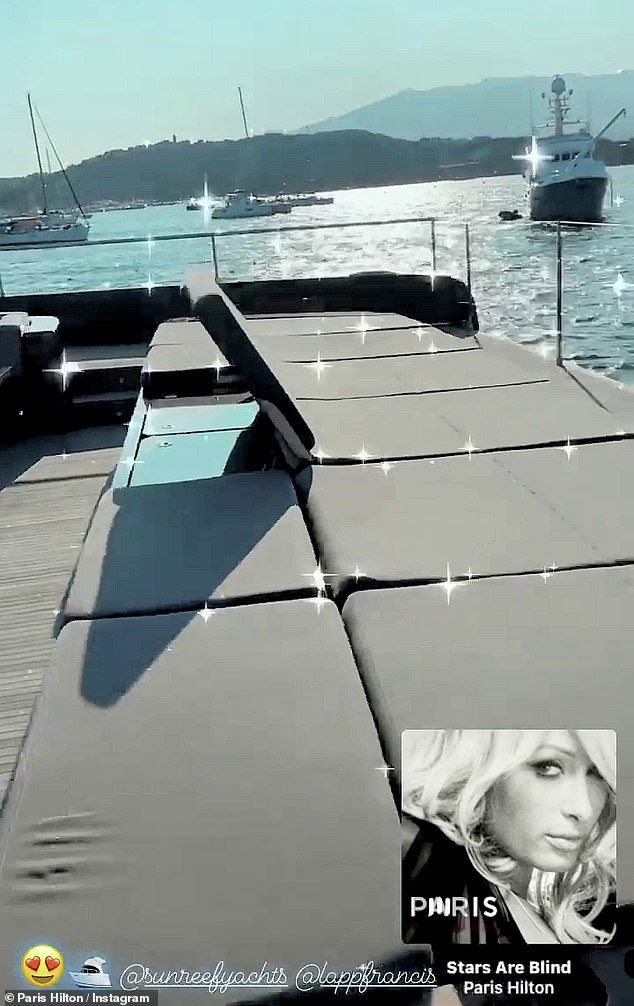 Sailing in style: The reality television personality shared a clip of the yacht’s deck to give her nearly 16 million followers a better view of the vessel’s amenities

All of the videos featured Hilton’s 2006 track Stars Are Blind playing in the background.

The single was also included on the performer’s debut album, Paris, which was made available to the public that same year.

The album received primarily mixed reviews upon its debut, although the project was commercially successful following its release. 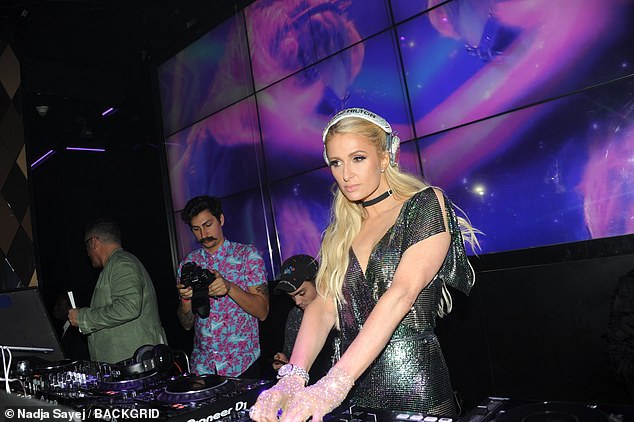 Going back: All of the clips featured her 2006 single Stars Are Blind, which was featured on her debut studio album Paris; she is seen performing in 2019

Hilton spoke to Billboard in 2017 and told the media outlet about her views on the constantly changing face of the entertainment industry.

‘Music moves so fast nowadays that if you do a song a year ago, it’s going to be not the same as something that you do right now…I want a newer, more fresh, like futuristic sound,’ she said.

The socialite also spoke about her long-awaited sophomore studio release and noted that she was busy with several projects that took precedence over her musical output.

She expressed, ‘I’ve been working on my second album forever, but I’m also running a huge business and doing a million other things.’ 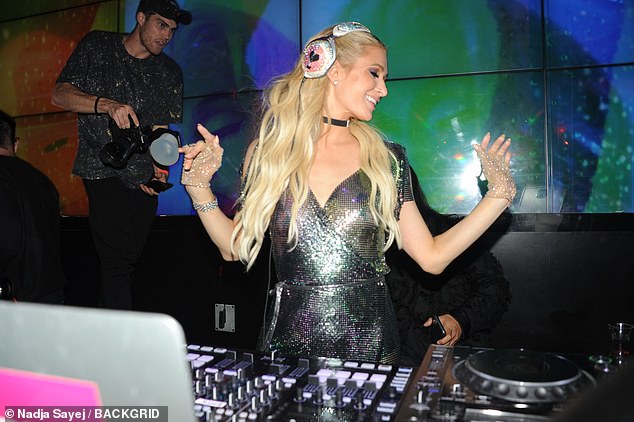 In the making: Hilton previously told Billboard that she had been ‘working on my second album forever’ despite being occupied with other projects