The company’s stationary bike – which retails from $1,895 – has become wildly popular amid the coronavirus pandemic, as gym closures have forced many Americans to start working out at home. 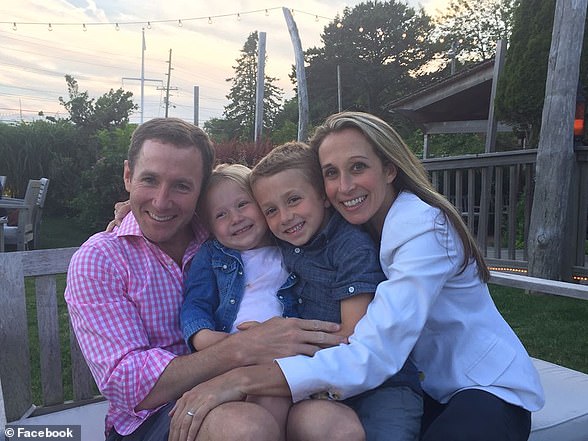 Foley, pictured with his wife Jill and their children Quinn and Mae, became a newly minted billionaire this year as demand for Peloton products spiked during the COVID-19 lockdowns 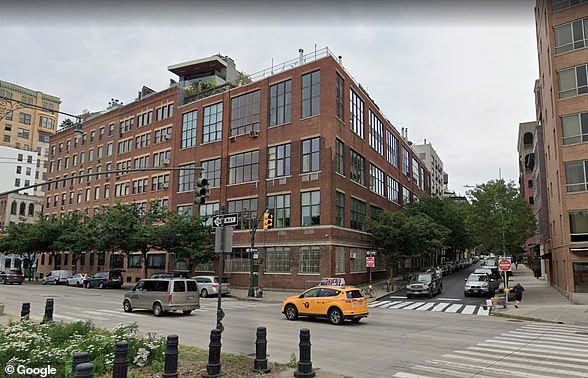 Foley had lived in a penthouse in this West Village building which he attempted to sell for $7.5million in 2013 after he and his wife spent more than a million renovating

Foley, who was born in Florida, began his career as an engineer in 1990 for Mars Inc. in 1990. According to the New York Times profile, he had previously put himself through college working nights at a Skittles factory.

The Harvard Business School graduate later helped to build CitySearch.com before becoming CEO of Evite.com, Co-founder and CEO of Pronto.com, and President of ecommerce at Barnesandnoble.com, where he helped launch the Nook e-reader.

He left Barnes & Noble in 2012 to start up Peloton on New York City after family life left it difficult for him to enjoy the boutique fitness classes he loved and he decided to find a way to bring them into the home.

According to Bloomberg, he initially posted a video to Kickstarter in 2013 which raised him $307,000 to get the company off the ground.

In the beginning, Foley also personally pushed the bikes, spending Sundays in Short Hills Mall in New Jersey trying to sell them, according to the Times.

He told Master of Scale in August that he spent the first three years pitching the company to thousands of investors, but nobody was interested.

‘No investors wanted to look at this thing. They wanted nothing to do with it,’ he said.

‘They couldn’t understand how we’d possibly be able to build the bikes, deliver them, produce the tablet software and then create the content, all by ourselves,’ he also told the Wall Street Journal in 2018. 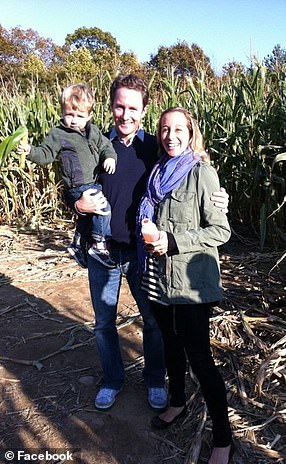 Foley, pictured, with his wife Jill, came up with the idea for Peloton after the couple struggled to get to boutique classes after having children. They are pictured with their son Quinn who is now 12

Yet having sold its first bike in 2013, Peloton now has more than 2.6 million members and 3,500 employees worldwide.

And once the pandemic hit and demand skyrocketed, Foley found himself a newly minted billionaire by September.

Bloomberg estimated then that he was worth $1.2 billion, his wealth having tripled this year. He owns 8 percent of stock in the company.

The former engineer now lives in the West Village with his wife Jill, 42, their son Quinn, 12, and daughter Mae, 9.

They had previously listed a home in the area for $7.5million, according to Curbed.

Jill, who is the company’s vice president of apparel, said the idea for the company had come up because she and her husband were ‘addicted to fitness’.

‘We loved the way we felt after a high-energy, instructor-led interval training class.’

However, once they started having kids, their lifestyles and jobs became more demanding.

‘We found it hard to get to these classes and we actually would get in arguments about whose turn it was to work out!

‘So, one day, John came home and said, ‘I have a great idea!’ What if you could get a high-energy, instructor-led interval training class in your own home!? Working out at home was traditionally so boring and not very effective’, she said. 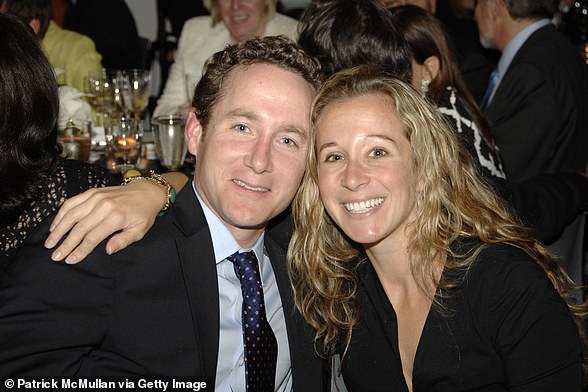 In December last year it was announced that Peloton was joining the Nasdaq 100 index and its stocks enjoyed a boost from the inclusion on Monday.

The company’s sales had grown by 172 percent that year as its stationary bike became wildly popular when coronavirus-related gym closures forced many Americans to start working out at home.

The company halted their own lives classes for a while in April after an employee in the New York City studio contracted COVID-19 and members urged for them to be shut down to keep the instructors safe.

The exercise equipment company was vilified over the commercial titled ‘The Gift That Gives Back’, which shows a woman receiving a stationary bike from her husband on Christmas morning.

She then documents her year-long fitness journey in a series of selfie clips that she compiles into a thank you video for her husband. 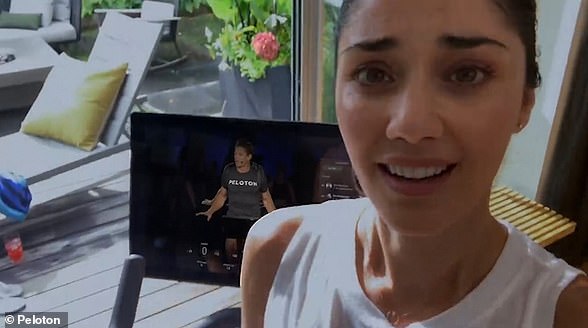 The 2019 holiday commercial was slammed by viewers on social media

Before this, Peloton shares had risen steadily through November 2019 in anticipation of a strong holiday season. The company had gained almost 10 percent just the week before after strong Black Friday sales.

The company’s stock fell 9.12 percent just two days after the commercial’s debut and dropped the market cap to around $9.4billion.

Shares would continue to fall in early December after Citron RESEARCH, an online stock commentary website, claimed in a report that the firm is worth $1billion rather than the $8.8billion they claimed.

The report found that Peloton’s true stock price should be just $5 per share by 2020, a dramatic drop of 85 per cent, and it could be worth as little as $1bn.

It based the downgrade on the fact that other manufacturers produce smart exercise bikes for just $500 and that existing bikes can be converted into Pelotons with a $12 attachment and the use of the firm’s app. 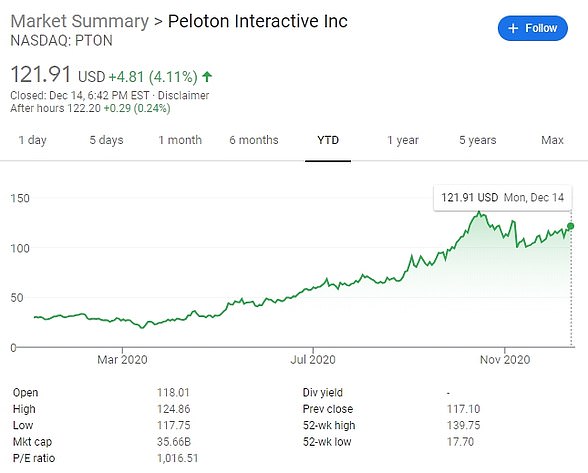 The report also criticized the firm for charging customers who buy their exercise bike $39 dollars a month to access online classes – and only charging $12.99 for their app for people who don’t own a Peloton.

And it called into question the reliability of CEO Foley who it said wrongly claimed the firm is profitable.

In February 2020, before the pandemic hit, shares plunged as much as 12 percent further and Peloton reported a loss of 20 cents per share.

It came as the company was embroiled in a lawsuit with Flywheel Sports over patent infringements.

Peloton accused Flywheel Sports of infringing two patents, as well as copying their streaming service on bikes, right down to metrics model and display.

Ultimately, Flywheel sports was forced to stop offering its At Home service and gave customers one month to trade the $2,000 bikes for Peloton models.

After these losses, Peloton has since regained ground and continues to climb, yet this year has not been without its own setbacks. 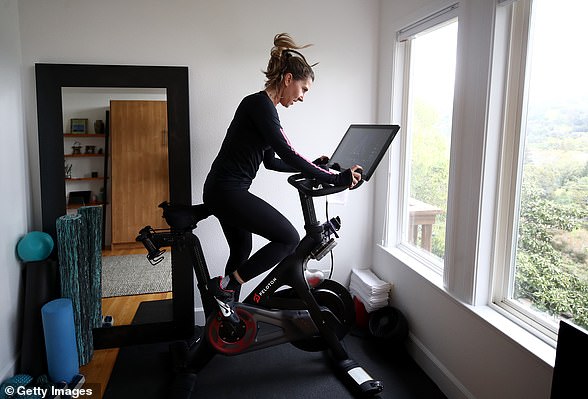 The company’s most famous product is a $1,895 stationary bike that has become wildly popular amid the coronavirus pandemic, as gym closures continued

It was also hit with a patent infringement lawsuit from a company credited with sparking the world’s indoor cycling craze over a quarter of a century ago.

Mad Dogg Athletics (MDA), which brands itself as ‘the creator of the Spinning and indoor cycling category’, filed the lawsuit against Peloton in the US District Court for the Eastern District of Texas on Monday.

The suit alleged that Peloton infringed upon two of MDA’s patents that are ‘directed to core features of an exercise bike designed to bring the experience of an instructor-led class into the rider’s home’.

Peloton has reportedly brought in revenue upwards of $1.8billion in 2020, and the company’s daily stock price climbed above $100 in September.

The soaring demand during the holiday season has caused headaches for the company, however, as customers complain of months-long delays in deliveries that have caused some to cancel their orders and defect to rival brands such as SoulCycle.

Last month Peloton told The Wall Street Journal that the delays ‘are primarily due to shipping logjams, particularly at ports as the bikes are transported to the US from manufacturers overseas’.

A spokeswoman stated: ‘The wait times right now are not how we want people to experience Peloton’.

Peloton bosses stated in a recent letter to shareholders that they were ‘doing everything we can to get our products to our prospective Members as quickly as possible’.

Then in May this year Peloton announced it is recalling all of its 126,000 Tread+ and Tread treadmills across the United States after they were linked to the death of a child and multiple injuries.

The US Consumer Product Safety Commission (CPSC) issued a statement saying: ‘Consumers who have purchased either treadmill should immediately stop using it and contact Peloton for a full refund or other qualified remedy.’