Perrie Edwards was seen brushing off the latest drama surrounding Little Mix and the band’s former member Jesy Nelson as she headed out for a date night on Thursday.

The singer, 28, headed out with boyfriend Alex Oxlade-Chamberlain in Manchester for the first time since welcoming their son Axel in August, as they enjoyed a lavish dinner at The Ivy.

It was also the first time Perrie has been seen amid Little Mix’s clash with Jesy Nelson, which saw Leigh-Anne Pinnock accuse Jesy of ‘blackfishing’ – a term used to describe a white person attempting to appear to have black heritage – in leaked messages shared on social media. 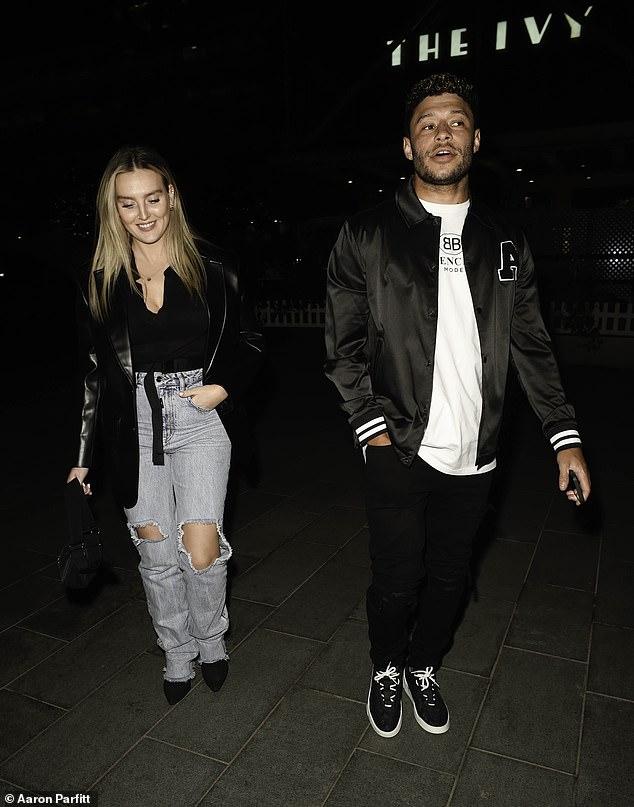 Moving on: Perrie Edwards was seen brushing off the latest drama surrounding Little Mix and the band’s former member Jesy Nelson as she headed out for a date night on Thursday

Date night: The singer, 28, headed out with boyfriend Alex Oxlade-Chamberlain in Manchester for the first time since welcoming their son in August and enjoyed a lavish dinner at The Ivy

Brushing the drama aside, Perrie seemed in great spirits as she was spotted heading home from the eatery with her footballer beau in tow.

The Little Mix star nailed casual chic for her evening out, as she dressed down in on-trend ripped jeans and a tailored leather blazer jacket.

Pairing her outfit with a low-cut black top underneath, Perrie added a boost to her ensemble with heeled boots and clutched onto her essentials in a chained shoulder bag.

She left her blonde locks down in a sleek and straight style and favoured natural make-up for her date night with her long-term boyfriend Alex, who cut a cool figure in a bomber jacket and dark jeans.

Enjoying a break away from their parenting duties, the couple looked relaxed as they headed out without their son Axel, now two months old. 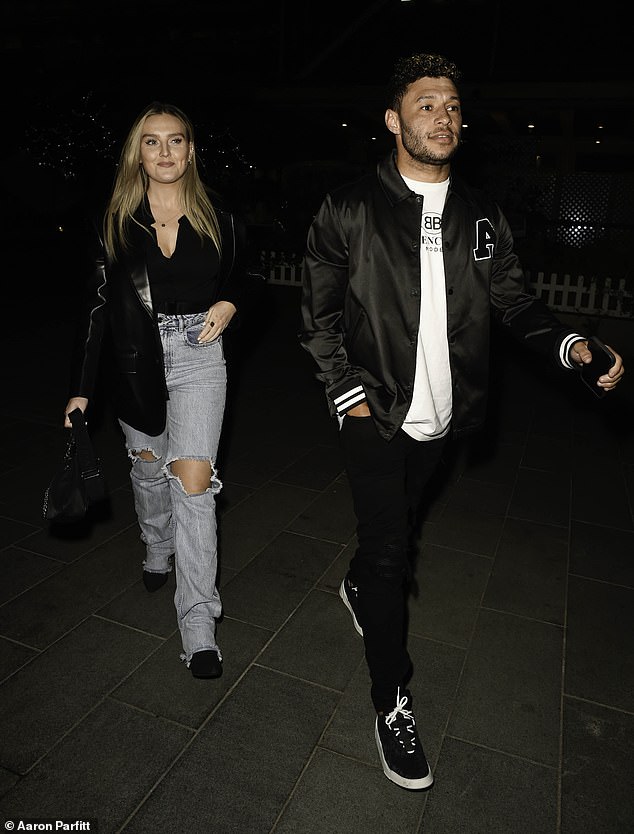 New parents: Perrie and Alex looked relaxed as they took a break away from their parenting duties, after welcoming their son Axel in August 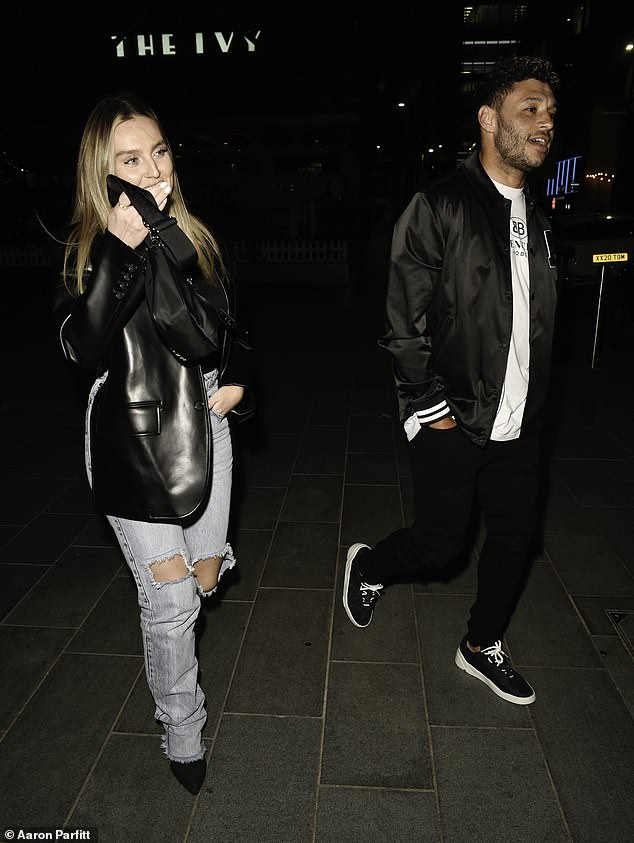 Casual: Mum Perrie was dressed down in ripped jeans and a leather blazer while Alex cut a cool figure in a bomber jacket and dark jeans

Perrie gave birth to Axel in August, just days after her bandmate Leigh-Anne welcomed twins with her fiancé Andre Gray.

She announced her son’s arrival on social media with a black and white snap of the tot moments after his birth and added the caption: ‘Welcome to the world baby 21/08/21.’

Since then, she has shared rare snaps of her baby boy with fans on Instagram, including a post that came a fortnight after his birth. Perrie gushed: ‘2 weeks of loving you. I’ve never felt love like this before! Axel Oxlade-Chamberlain.’

While she has been seen gushing about her baby boy, Perrie has remained tight-lipped over a reported fallout between Little Mix and Jesy, who quit the band after nine years in December last year. 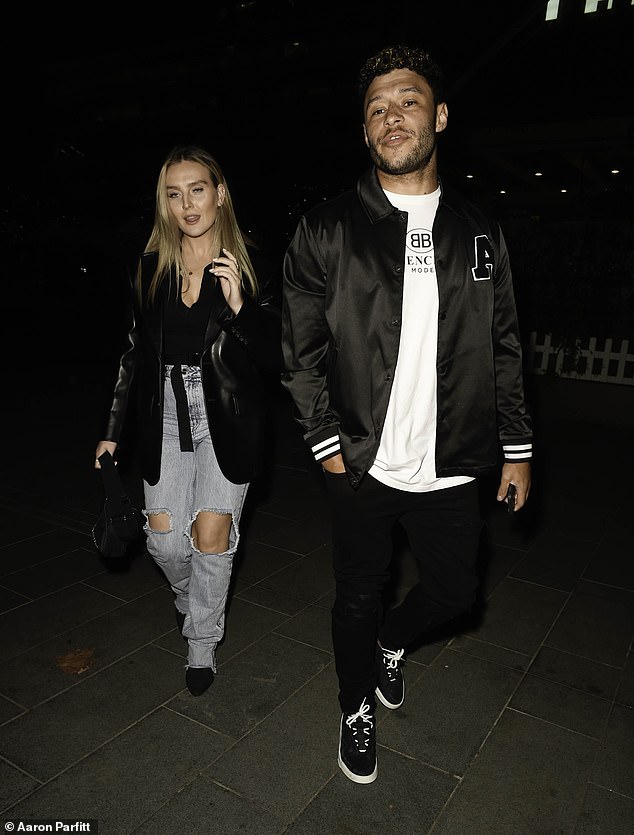 Taking a break: The new parents left their little one at home to enjoy some quality time

Reports of tension between Jesy, Perrie, Leigh-Anne and Jade Thirwall surfaced following the release of Jesy’s debut single Boyz – a collaboration with Nicki Minaj and Diddy – earlier this month.

Amid its release, it was reported that Jesy, Perrie and Jade had all unfollowed Jesy on social media before Leigh-Anne claimed Jesy had actually blocked her former bandmates in leaked messages that surfaced online.

In an awkward exchange with influencer NoHun, Leigh-Anne was seen accusing Jesy of ‘blackfishing’ in the music video for Boyz, as she replied to NoHun’s poll asking fans whether he should create a dance routine to Jesy’s new track.

Leigh-Anne advised him not to and insisted that ‘no one knows anything’ when it comes to the fallout between the stars, as she revealed she was ‘raging’ in a slew of messages.

Gorgeous: Perrie opted for natural make-up for the couple’s date night, while Alex kept it casual in trainers and a white T-shirt 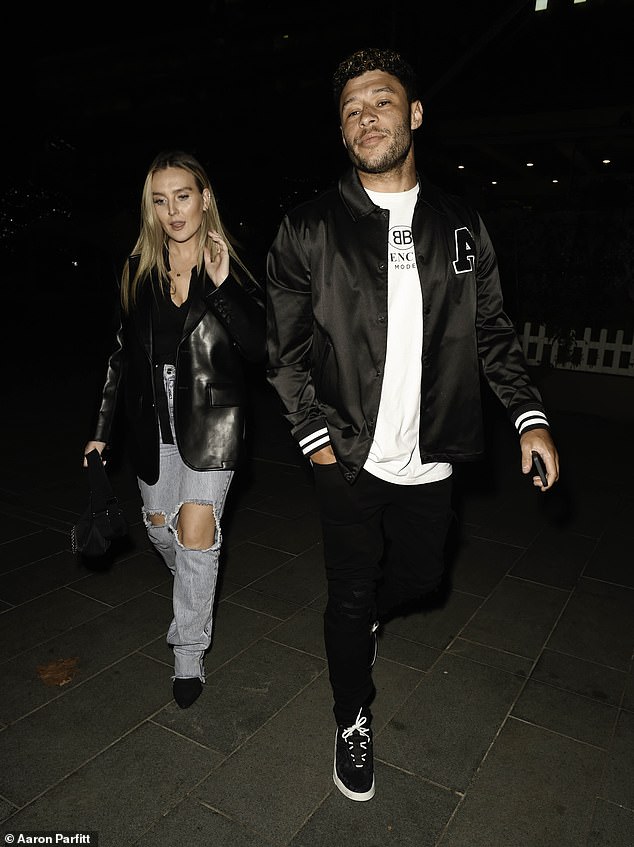 Beauty: Perrie left her blonde locks down in a sleek and straight style for their evening out 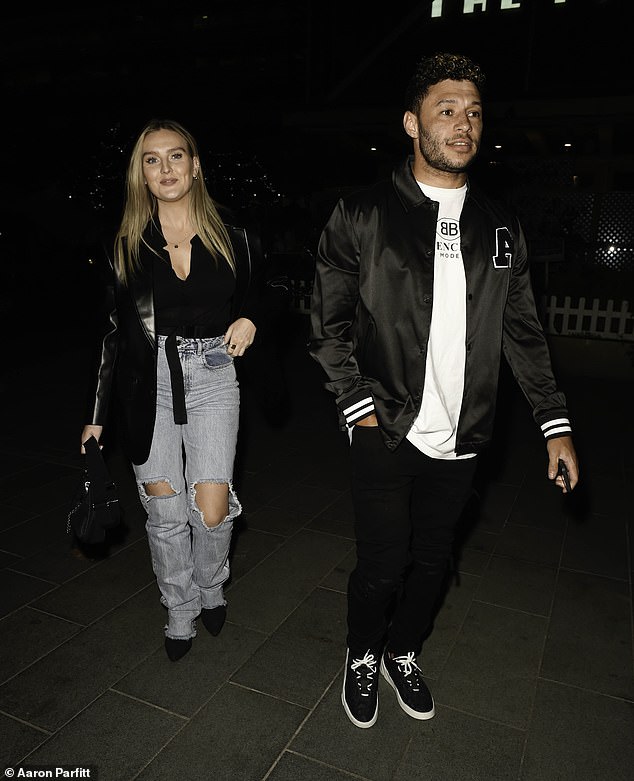 No drama here: Perrie’s date night with Alex marked the first time she has been seen since rumours of a fallout between Little Mix and Jesy following the band’s ‘blackfishing’ row

Jesy then took part in an Instagram livestream with Boyz collaborator Nicki, who accused Leigh-Anne of trying to ruin Jesy’s new solo career and branded the new mother and the rest of the group ‘jealous miserable clowns’.

The songstress was then said to be ‘devastated’ Leigh-Anne had ‘sparked racial hatred’ and a new wave of intense trolling towards her, telling pals she couldn’t believe ‘someone she once called family could be so cruel.’

However, a source clarified to MailOnline: ‘It’s not fair to criticise Leigh-Anne over this. She was just upset as were others over blackfishing, and social media is awash with it.’

Jesy has spoken candidly about her mental health battles in the past, and revealed in her 2019 BBC documentary, Odd One Out, that she attempted suicide after being subjected to vicious trolling. 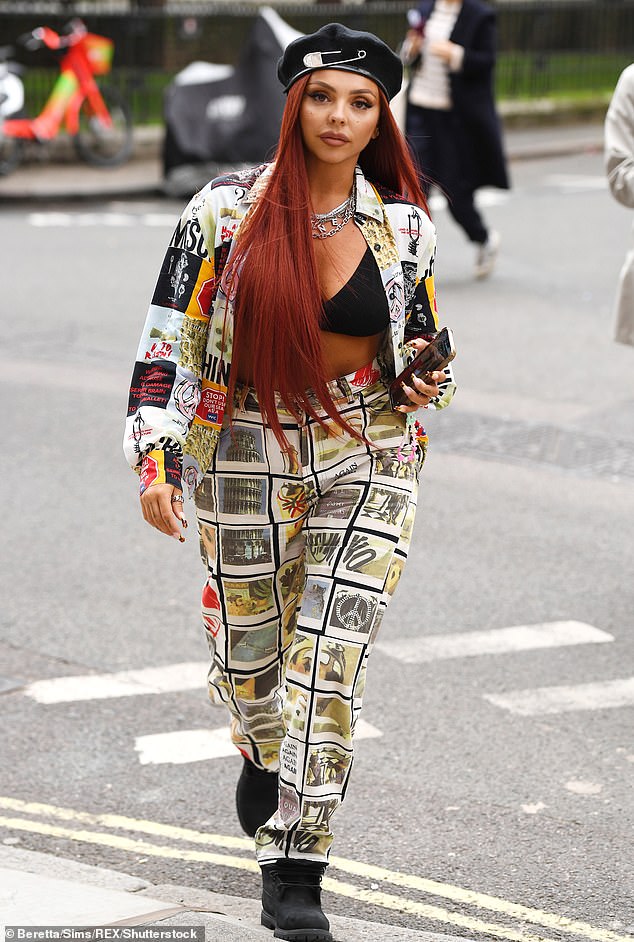 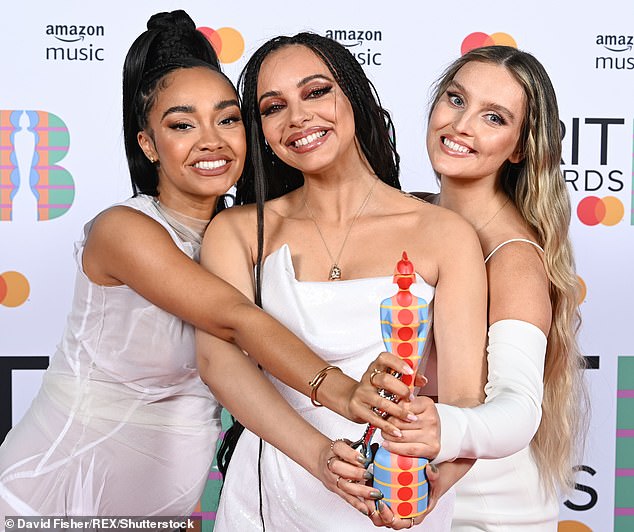 Fallout: Leigh-Anne claimed that she was ‘raging’ in the leaked messages, as she accused Jesy of blocking the Little Mix stars on social media after reports they had unfollowed her

Following a backlash over the livestream chat, Trinidadian-born rapper Nicki noted Jesy’s mental state as she tweeted: ‘JeLeigh btchs actin real messy. ~ if you know someone has been suicidal from bullying in the past, why try to get a bunch of ppl to bully them again about smthng else, on an even bigger scale?

‘Shame on you— that’s rlly sad. You don’t know what ppl can deal with. Mental Health [sic].’

The post came after Nicki also took a not-so subtle swipe at Leigh-Anne in which she accused the singer of only speaking out about blackfishing now that Jesy is no longer helping the band make money.

Nicki posted: ‘Don’t call things out when they benefit your personal vendetta to ppl. Call them out immediately once you see it chile. Don’t wait a decade after you’ve made millions with the person #BoyzOutNow.

‘When ppl can’t get money with you they always try to stop your bag. Well only the corny ones chile #BoyzOutNow going live in one hour.

‘Jesy! We got all these #Jelly btchs actin real MESSY!!!!! Stop it miss gorl Flag of United Kingdom going live in one hour on IG to get into sum thangz [sic]’.

Three years ago Jesy was first accused of cultural appropriation when she sported braids in her hair in a photo posted to Instagram, which was later deleted.

She came under fire yet again after releasing the music video to her new single, Boyz – a remake of Diddy’s 2001 video Bad Boy For Life, which she samples in her new track.

Addressing the claims in an interview with Vulture, Jesy claimed that she was never targeted with ‘blackfishing’ claims while she was in Little Mix and has only faced such criticism following her departure from the girlband.

‘I’m very aware that I’m a white British woman; I’ve never said that I wasn’t,’ she said, defended herself from the accusations.

While Little Mix has remained silent on the matter, Leigh-Anne seemed to refer to the clash with Jesy during her 30th birthday celebrations, as she teared up giving a speech at a party she hosted for family and friends.

‘I’ve got the most beautiful fiancé who I’m still pretty much obsessed with. Best believe, everything I stand for, everything I’m fighting for, it’s for them [her twins].

‘I will never stop. I have found my voice now and I will continue to use it. Tonight we celebrate life, best friends and amazing family. I love you all.’

Her husband-to-be Andre then said: ‘You can put this on Instagram or whatever and if you’ve anything to say, come and find me. She’s my baby mother, my wife.

‘If you’re going to try and disrespect my baby mother, my wife, my fiancée and my children, there’s gonna be a problem. That’s how it is.

‘All I want to do is support you three. Everyone in here knows their names. When they grow up, I hope they’re just like you.’

A source close to Jesy told MailOnline: ‘Jesy has already apologised for any offense caused with the blackfishing claims and she hasn’t said a word about Leigh-Anne.’