By Eve Buckland For Mailonline


Pregnant Vogue Williams was glowing as she headed to London’s Heart Radio on Tuesday.

The presenter, 36, who announced she was expecting her third child last month, showed a hint of her bump in a cream rollneck sweater, teamed with a furry gilet.

The star teamed this with a leather mini skirt which showcased her enviable legs in black tights. 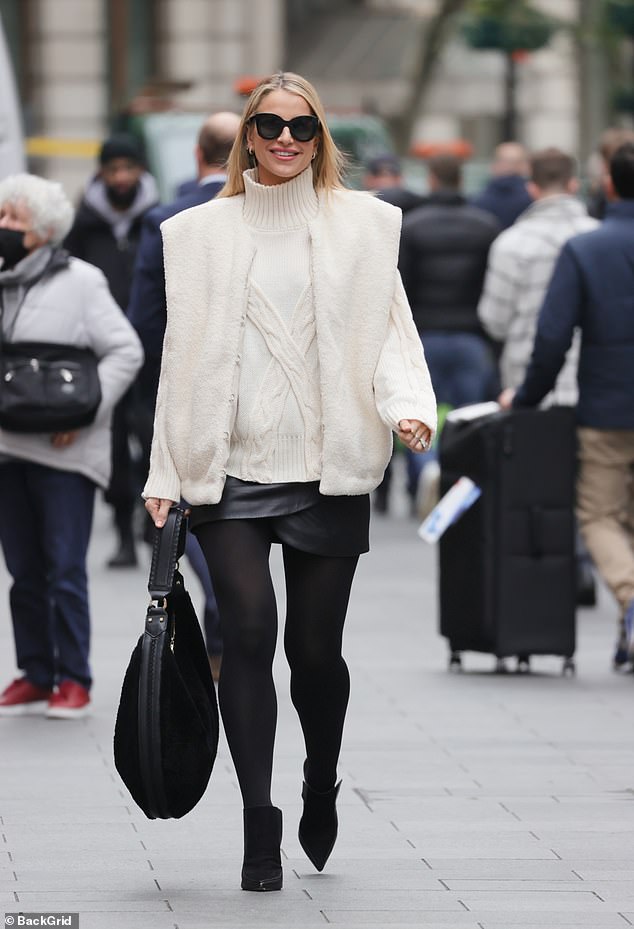 Leggy: Pregnant Vogue Williams was glowing as she headed to London’s Heart Radio on Tuesday

Vogue boosted her height with black stiletto ankle boots and accessorised with a black handbag.

The couple, who were married in June 2018, are already parents to three-year-old son Theodore and a one-year-old daughter called Gigi.

Confirming her third pregnancy in October,  Vogue told Hello!: ‘Baby number three on the way!!! This has been a lot harder to hide third time around, I feel like I’ve had a bump since the first month.’

Spencer shared a sweet snap of the couple and wrote: ‘WE’RE HAVING A THIRD BABY!!! 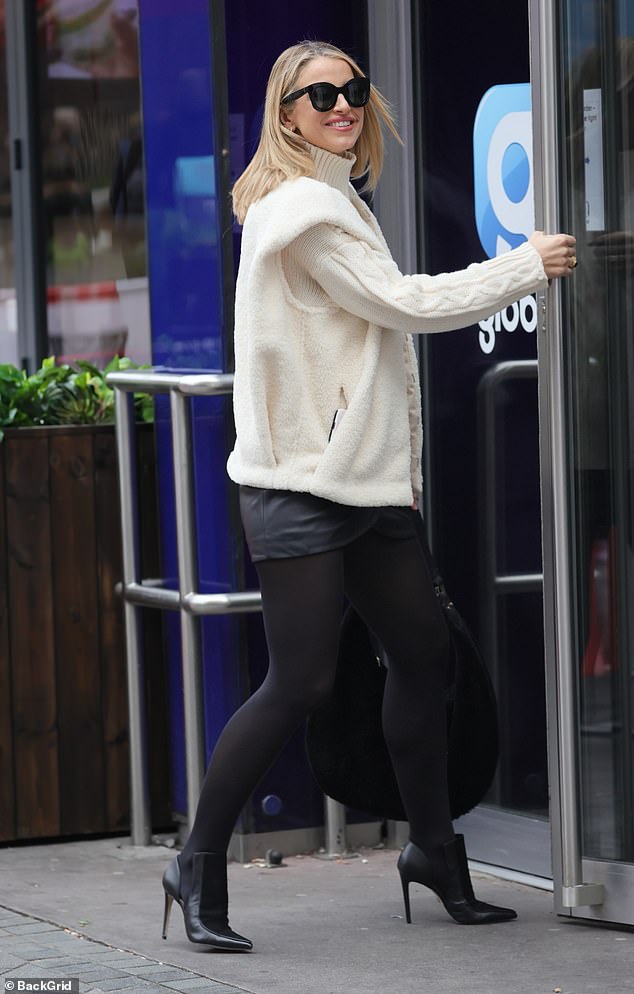 Glow: The presenter, 36, who announced she was expecting her third child last month, showed a hint of her bump in a cream rollneck sweater, teamed with a furry gilet

‘If you’d have told me a few years ago that by the age of 33 I’d have three beautiful children with the woman of my dreams I WOULD have believed you because that was always the plan….

‘Having said that I feel fortunate every day for what we have. Family is EVERYTHING.’

Vogue added of their new baby: ‘It’ll be the more the merrier. ‘Theodore and Gigi absolutely love each other, they’re always playing together.

‘My sister Amber is my best friend and I want the three of them to be best mates.’ 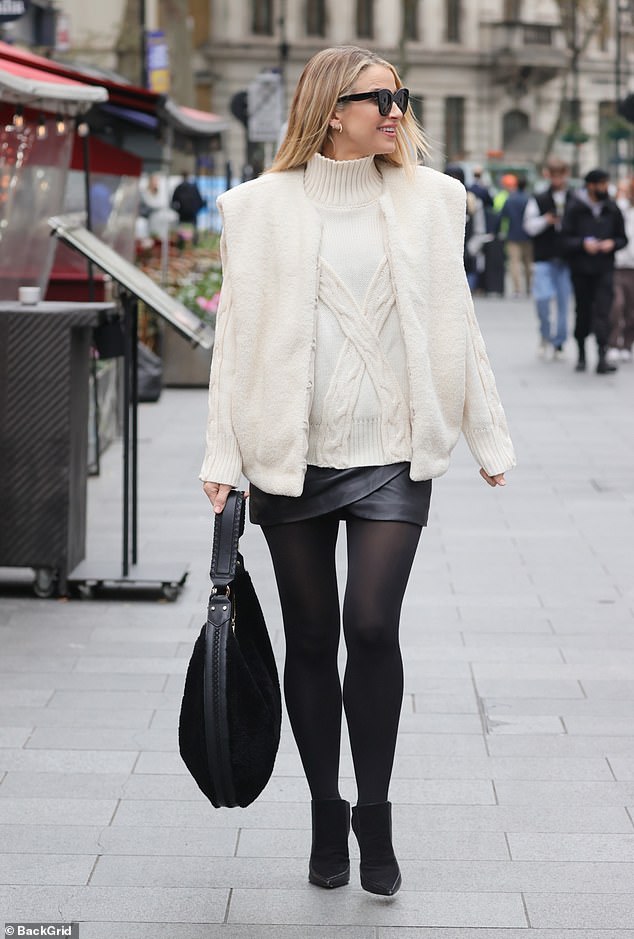 Baby number three: The star teamed this with a leather mini skirt which showcased her enviable legs in black tights

The Irish-born TV and radio presenter added: ‘Gigi doesn’t have a clue she’s getting a little brother or sister and I don’t think Theodore minds.

‘He doesn’t really understand yet. If I ever mention the baby, he asks: ‘Is it coming now?”

Vogue presents on Heart radio on Sunday mornings and is the host on a new Irish talent contest The Big Deal alongside a star-studded judging panel which includes Boy George, entertainment duo Jedward and JLS star Aston Merrygold. 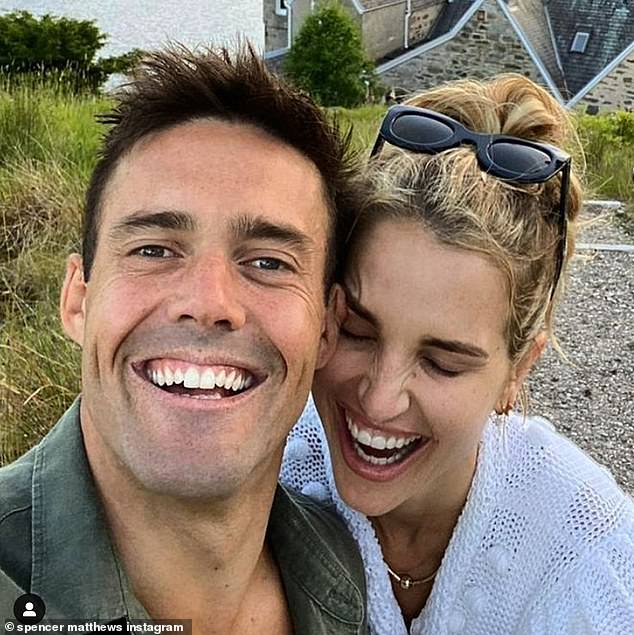 Announcement: Spencer confirmed the couple were expecting their third child in October

The presenter revealed that she will probably keep working till the baby arrives, adding: ‘I wouldn’t know what to do with myself if I wasn’t working.’

She said keeping her pregnancy a secret at work was relatively easy until her bump began to show a couple of weeks ago and admitted Matthews had nearly let it slip while recording their joint podcast, Spencer & Vogue, and they had to edit it out.

Discussing finding out Vogue was pregnant, Spencer said: ‘It was a wonderful moment. I was delighted.

‘We’d been trying, but I never expected it to happen as easily as it did. We’re very lucky.’

The former Made in Chelsea star referenced his work trip to New York and the couple said they will use the break to spend some quality time together.

He added: ‘I’ve got a few meetings, but Vogue and I will spend time together.

‘When you’re as busy as we are, sometimes you fail to make time for one another so we’re treating this as an opportunity to enjoy each other’s company.

‘We’re very fortunate to be so close and happy together and it’s a special thing to be able to grow our family.’ 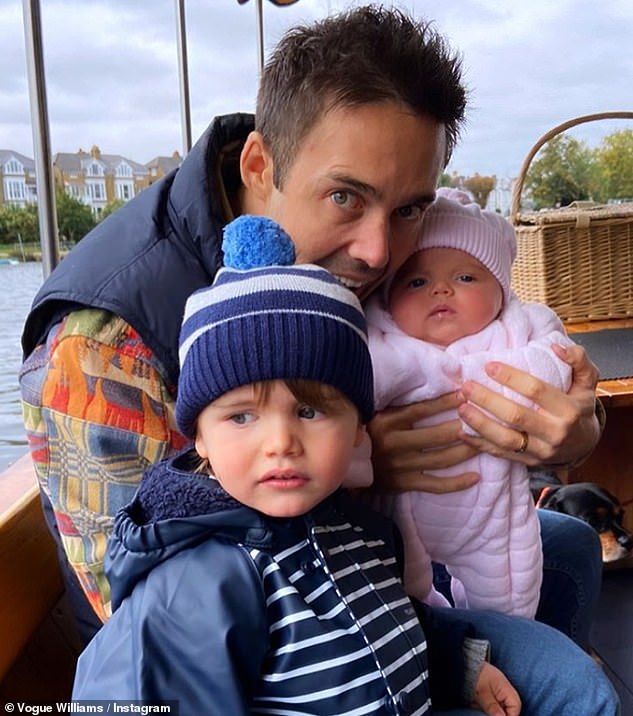 Delight: Vogue and husband Spencer Matthews, who were married in June 2018, are already parents to three-year-old son Theodore and a one-year-old daughter called Gigi