However, the monarch’s decision not to attend COP26 after spending a night in hospital does represent a “watershed moment”, suggested Jonathan Sacerdoti, a regular on Sky News as well as a contributor to The Spectator. The 95-year-old Queen was ordered to rest by doctors after her admission, with son and heir Prince Charles effectively filling in in Glasgow, assisted by wife Camilla, Duchess of Cornwall, and the Duke and Duchess of Cambridge.

Nevertheless, Mr Sacerdoti does not believe there is any prospect of Her Majesty, who is gearing up for next year’s Platinum Jubilee to mark her 70th year on the throne, stepping down.

He told Express.co.uk: “I just can’t imagine the Queen abdicating.

“I think that she’s always made it clear that she saw her role as one for life. 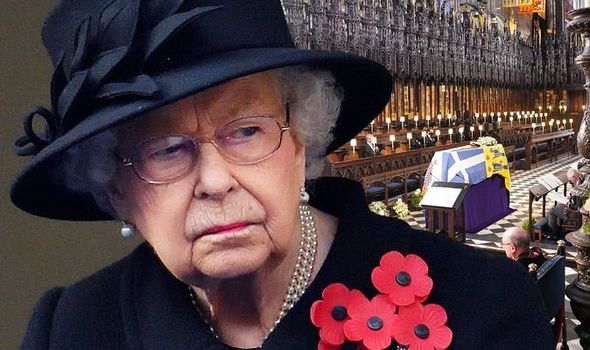 Queen Elizabeth has been “under pressure” – but will not abdicate, said Mr Sacerdoti (Image: GETTY)

“And I think that what we’re seeing now actually is probably a good sign that as long as she is able mentally to carry on doing her duty as Queen, it seems to be her intention to do so.“

Mr Sacerdoti acknowledged the Queen was probably frailer than she had been previously – but suggested the structure of a Royal Family was such that it was perfectly possible for other senior royals to support her in her activities.

He added: “So she will carry on doing what she can when she can how she can to the best of her abilities.

READ MORE: Queen may NEVER meet Lilibet ‘Virtually impossible to see how it could happen smoothly’

“I think that for a while now, even before this recent hospital admission, and a couple of cancellations of royal appearances, we’ve seen the other royals stepping up and helping her more just as we do in other families.”

In relation to her absence from the crunch environmental summit, Mr Sacerdoti said: “I think that the Queen’s decision not to go to COP26 and not to deliver her speech in person was obviously a bit of a watershed moment.

“And I think in a way it’s a sign of Britain learning to adapt to having an older Monarch.”

Buckingham Palace has recently confirmed that in the future the Queen will always bring a second family member to public engagements, Mr Sacerdoti pointed out.

“And I think that’s something that most people are massively supportive of.

“She’s reached this amazing age of 95, carried on working incredibly hard with a full and busy schedule, so I think people are more than ready for her to make whatever adjustments she needs in terms of her health and her age so that she can carry on fulfilling her duties as best she can, but without putting a strain on her.”

Nevertheless, Mr Sacerdoti argued it was impossible to downplay the strain the Queen had been placed under by the various problems she has been having to contend with, not least the death of Prince Philip in April after more than 73 years of marriage, Prince Harry and Meghan Markle’s move to the United States, and son Prince Andrew’s well-publicised legal difficulties.

He explained: “I think aside from her advanced age the Queen has been under enormous personal pressure in recent years.

“Not just the loss of her husband after they’d spent that prolonged period in lockdown together, but also Prince Harry left the country to start a new career as a celebrity in America.

“And he’s been using his royal status and fame to secure lucrative business deals and revealing family tensions to the media.”

He added: “So there’s been an enormous amount of pressure on her, and then add to that the fact that the media seems to have revived its interest in Princess Diana.

“We had an A-List movie being released, Spencer, further coverage in The Crown not just of Diana but of other things that might concern the Queen, the tasteless Diana, The Musical on Netflix, and the HBO cartoon mocking Prince George.

“There’s been tons of stuff that I think on a human level would have been challenging for anybody, let alone the Queen at her age, particularly having lost her husband after such a long time together.

“So I think that all of these things will have had a knock-on effect on her health and simply the fact that she is quite senior in years.”