The discovery of skeletal remains at the foot of an ancient temple in South Korea gives further credence to legends that the Silla empire performed ritual human sacrifice.

The body of a young woman in her twenties was unearthed under the west walls of the Wolseong Palace site in Gyeongju, South Korea, which was constructed in the fourth century.

She was found less than two feet away from the remains of a man and woman discovered on the site in 2017.

Initially, researchers believed the couple’s deaths could have been accidental, but with the discovery of a third body ‘there’s no denying Silla’s practice of human sacrifice,’ said Choi Byung-heon, the Soongsil University archaeologist who led the excavation, said in a statement.

The young woman’s burial dates to the 4th century—the same era when the palace was built—and her killing may have been part of a foundation sacrifice to ensure the building stood strong for years to come, Cho said.

‘After finishing off the foundation and moving onto the next step of building the fortress, I guess it was necessary to really harden the ground for the fortress to stand strong’ Choi said in a statement.

‘In that process, I think the Silla people held sacrificial rites, giving not only animals but also humans as sacrifices.’ 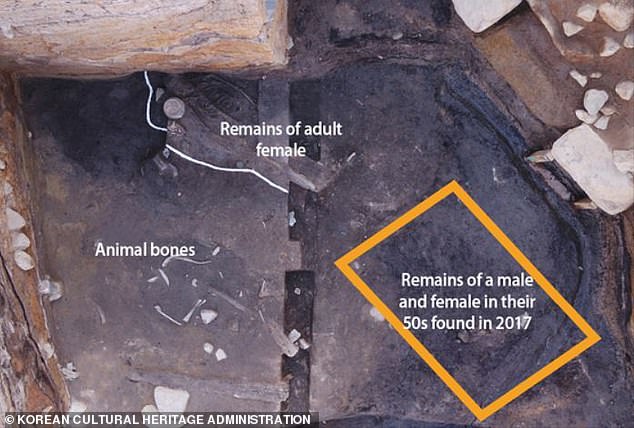 The body of the young woman, in her twenties, was found less than two feet from the remains of a male and female in the 50s buried up to 100 years later

Wolseong, which translates to ‘moon castle,’ is a Unesco World Heritage Site and listed as Korea’s Historic Site No. 16.

The discovery of the two original bodies there in 2017 made headlines across Korea, where ancient human sacrifices during large-scale construction projects have long been considered ‘a horrific myth,’ reported Korea JoongAng Daily.

But because neither body showed signs of struggle and animal bones and objects used for ancestral rites were located nearby, the Cultural Heritage Administration of Korea concluded the pair died as part of a sacrificial ceremony.

The young woman’s skeleton was original found in April but, because it measured just four-and-a-half feet long, archaeologists initially thought it belonged to a child. 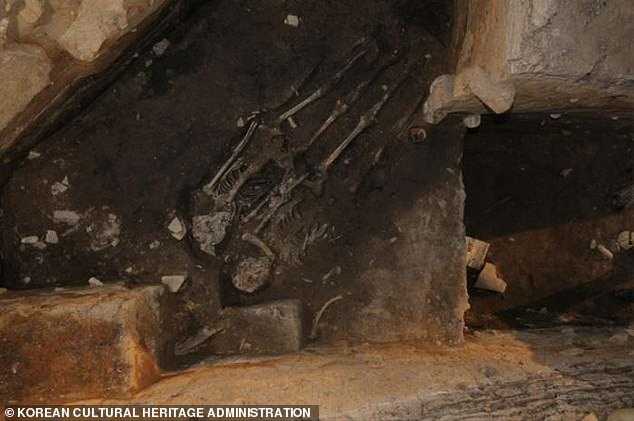 Two skeletons (pictured) were previously found at the palace in 2017, but experts believed heir deaths could have been accidental.  Now with another body in similar condition surrounded by similar artifacts, ‘there’s no denying Silla’s practice of human sacrifice,’ said Choi Byung-heon, the Soongsil University archaeologist 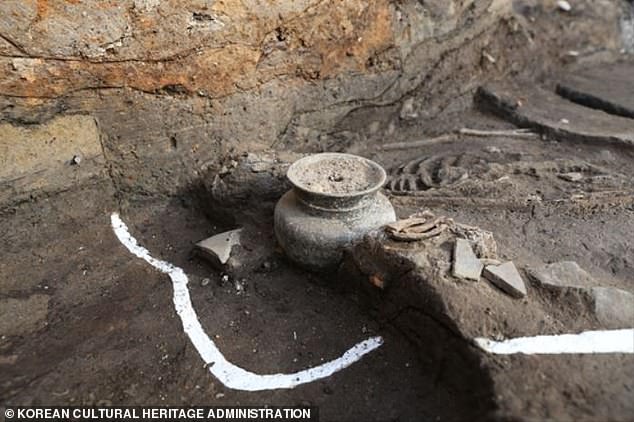 Remains of an adult female from the 4th century was found in Gyeongju, Korea, at the site of Wolseong Palace, the capital fortress of the Silla Empire. Near her body was intact pottery that may have contained alcohol 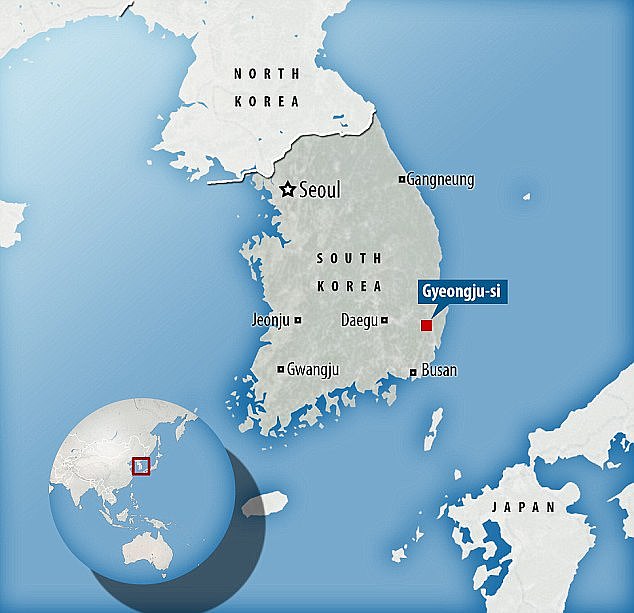 Gyeongju, about 175 miles from Seoul, was the capital of the Silla Kingdom, which controlled most of the Korean peninsula from 57 BC to AD 935

‘The first thing we do when we find human remains is figuring out the gender and age,’ said Kim Heon-seok, a researcher at Gyeongju National Research Institute of Cultural Heritage.

‘Though her remains were also in good condition, her pelvis, which we use to find out the gender, was damaged, so we had to look at other things like her physique and height to figure it out.’

Eventually, isotope analysis of her teeth determined she was an adult who suffered from chronic malnutrition that stunted her growth, a sign she was of lower social status.

An intact pot was found near her head, with x-ray analysis indicating there was another, smaller vessel inside it. 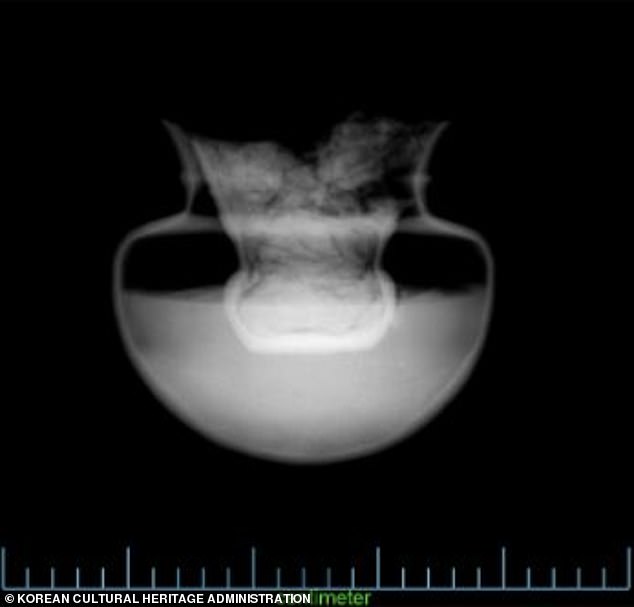 X-ray analysis of an intact pot found near the latest body  indicated there was another, smaller vessel inside it. Similar pottery was found at the 2017 site, researchers say, though it was ‘not a common feature you witness in ancient tombs’ among the Silla

Who were the Silla? Korean kingdom’s culture still visible more than 1,500 years after the dynasty fell

The ancient Silla Kingdom reigned over part of the Korean Peninsula from 57 BC to AD 935, making it one of the longest-ruling royal dynasties.

Many of Korea’s modern-day cultural practices stem from this historic culture. 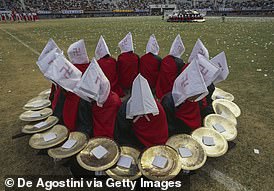 Participants in traditional costume in a Silla festival in Gyeongju, South Korea

Despite its long reign, the number of Silla burials with intact skeletons remained few and far between.

However, in 2013, researchers had a lucky break while excavating a grave near Gyeongju, the historic capital of the Silla Kingdom.

Inside a traditional burial coffin, called a ‘mokgwakmyo,’ lay the nearly perfectly intact bones of a woman who died in her late 30s.

‘It looks like the larger pottery carried alcohol or some kind of liquid,’ said Insistute researcher Jang Ki-myeong. ‘It was buried together with the body. This is not a common feature you witness in ancient tombs, but something similar was found at the 2017 site.’

And like the earlier bodies, the young woman’s skeleton showed no signs of struggle.

Also, all three were buried facing the sky on top of the bottom layer of the palace’s western wall, directly in front of where a gate would have been.

The couple found in 2017 appeared to be in their 50s, but they died (or were killed) well after the younger woman—probably some time in the fifth century.

There is evidence in China of human sacrifice to ensure success and durability in construction, specifically during the Shang Dynasty, which lasted from 1600 to 1046 BC.

As at Wolseong, the sacrifices during the Shang period were commonly buried near entrances.

‘Historical records say such rituals were carried out before making the gates or just before engaging in the most important part of the construction process,’ said geologist Lee Seong-joo of Kyungpook National University.

Wolseong Palace was the main complex of the Silla Dynasty, located in its capital city.

The 12th-century history text Samguksagi claims King Pasa constructed the fortress in 101 AD, but there’s no archaeological evidence to support that date.

Accelerated mass spectrometer analysis, however, suggests construction started in the early 4th century and lasted for about 50 years.

Instead of discounting the first-century origins, Jang said, ‘We should further the research on Wolseong and try to find out what may have resulted in making such a record.’

The Silla ruled much of the Korean peninsula for nearly a millennium, from 57 BC to AD 935, making them one of the longest-ruling royal dynasties in history.

Many of Korea’s modern-day cultural practices stem from this historic culture. 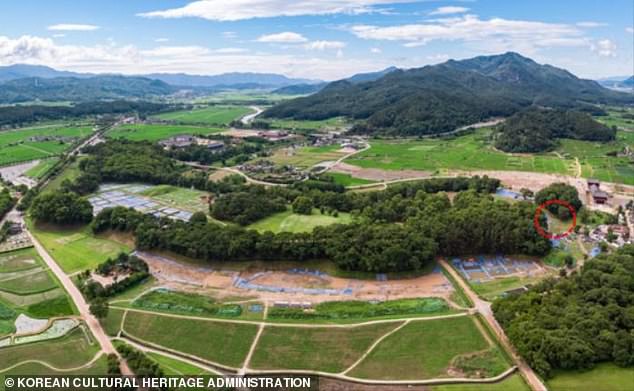 Wolseong Palace was the main complex of the Silla Dynasty, located in its capital city in Gyeongju, South Korea. Today its ruins are a UNESECO Heritage Site

Despite the Silla’s long reign, the number of burials with intact skeletons remained sparse.

‘Skeletons are not preserved well in the soil of Korea,’ Dong Hoon Shin, a bioanthropologist at Seoul National University College of Medicine, told Live Science in 2016.

Earlier excavations in the 1980s and 90s did result in the discovery of the 20 more Silla skeletons, but it’s not clear if they were sacrifices or not.

Only three were in good condition, Jag said, ‘while the rest were just scattered across a vast area with animal bones.

They’re definitely related to Wolseong, he added ‘but we need to conduct more research to find out if they were human sacrifices.’