Robbie Williams’s wife has come under fire for sharing a grim video of the popstar having a huge piece of ear wax removed from his ear on Instagram on Thursday.

The singer, 47, had been holidaying in St Tropez with Ayda and their four children, but his trip overseas was rudely interrupted by a trip to the doctors.

Robbie had been complaining of a painful ear and was forced to have it syringed in order to remove a giant piece of wax that had got stuck inside it.

Ayda filmed the entire ordeal and shared the graphic footage with fans – warning her followers it was ‘super gross’. 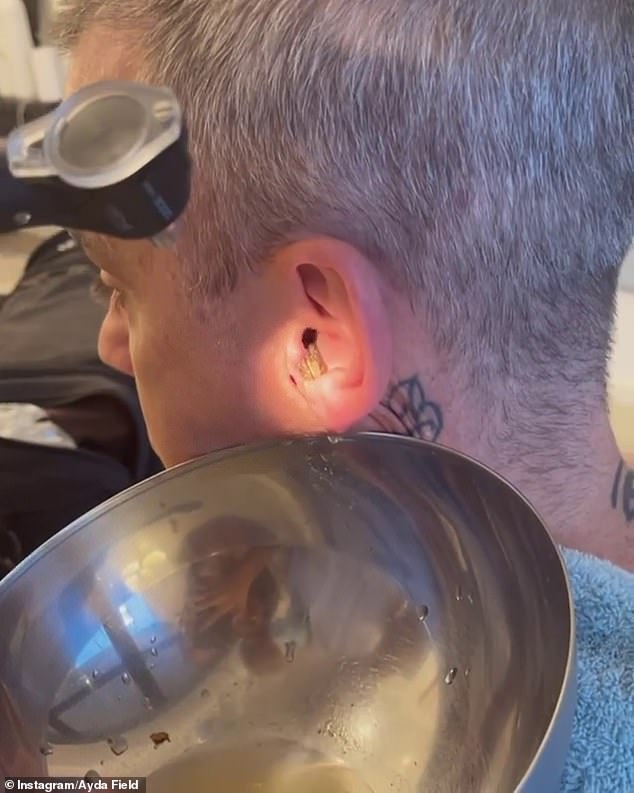 Super gross: Ayda Field took to Instagram on Thursday with footage of husband Robbie Williams having his ear syringed to remove a huge clump of wax 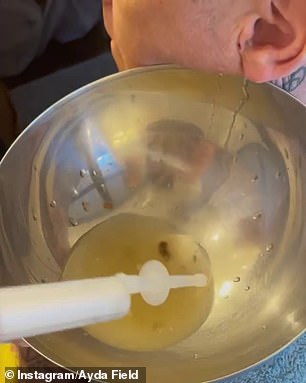 Grim: The video revealed the large block of wax which had been causing Robbie discomfort

The Let Me Entertain You hit-maker was seen sitting at the table while a French doctor used a syringe to push out the grim blockage.

Using a syringe, water is gently squeezed into the ear canal in order to remove the wax.

As Robbie winced while the doctor performed the treatment, a horrified Ayda was heard saying: ‘Ew, you had so much wax, what the heck is in there?’

A huge clump of earwax was then seen sitting in Robbie’s ear, before the doctor flushed it out into a surgical bowl.

Sharing the video on social media, Ayda joked that her famous husband can no longer ‘pretend not to hear her’, as she wrote: ‘Robbie Williams said his ear was hurting him and it was blocked…this is what the doctor found.’

However, the video didn’t sit too well with fans who claimed it was ‘too graphic’ to be publicly shared.

Ayda came under fire and was accused of invading Robbie’s privacy, with one of her followers quizzing: ‘Why would u film that?’ 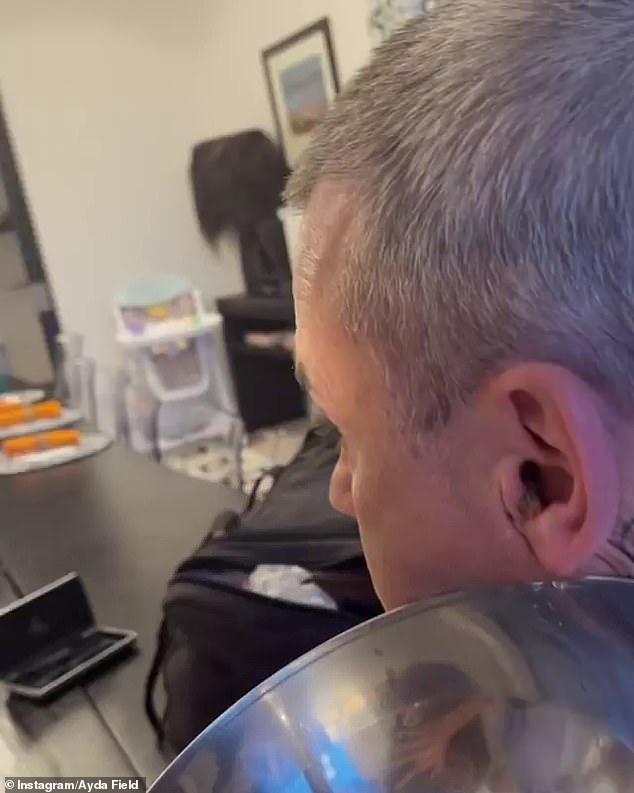 Not ideal: His holiday in St Tropez with his family was rudely interrupted with a visit from the doctor to treat his blocked ear canal 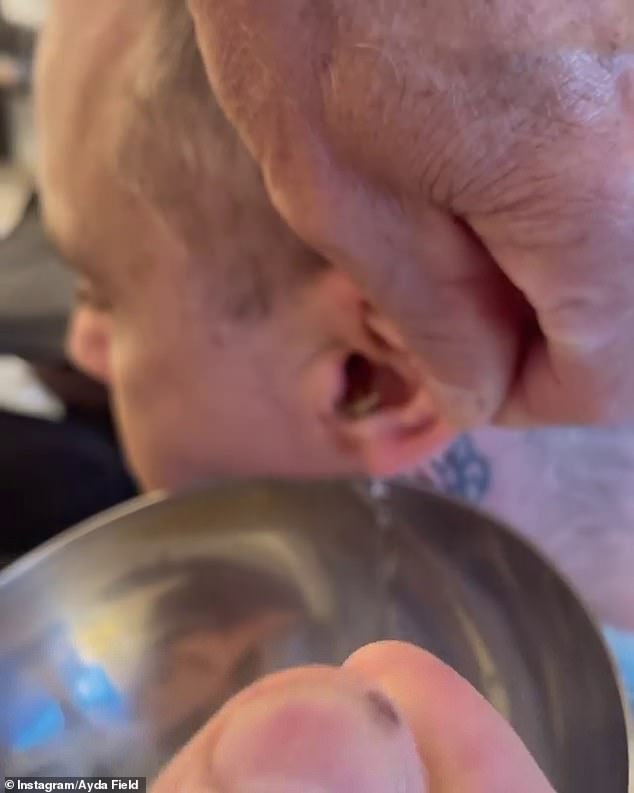 Satisfying: Robbie had to have his ear syringed, which sees water slowly pushed into the ear in order to remove the wax from inside

Another said: ‘Nothing of Robbie is now in his privacy… really sad,’ with one follower revealing: ‘Annnnd that’s when I decide to unfollow you.’

A fourth wrote: ‘But there’s no need to show EVERYTHING of your life…’

‘Seriously ! We surely aren’t this bored,’ said one more, while another fan added: ‘THIS is really Too Much. Stop this.. I am so sorry but I have to say it.’

Others, meanwhile, were all for the stomach-churning footage, with one person commenting: ‘This is my kind of content.’

Another fan insisted: ‘Haha this is grim and fascinating.’

Ayda’s post comes after Daily Mail Australia reported Robbie is set to fly out to Melbourne in the coming months to begin production on his upcoming biopic, Better Man.

The biopic is expected to tell the story of Robbie’s rise to fame while exploring the experiences that made him who he is and the demons he battled both on and off on stage.

Principle cinematography is set to begin early next year in 2022, with The Greatest Showman’s Michael Gracey set to direct the upcoming project. 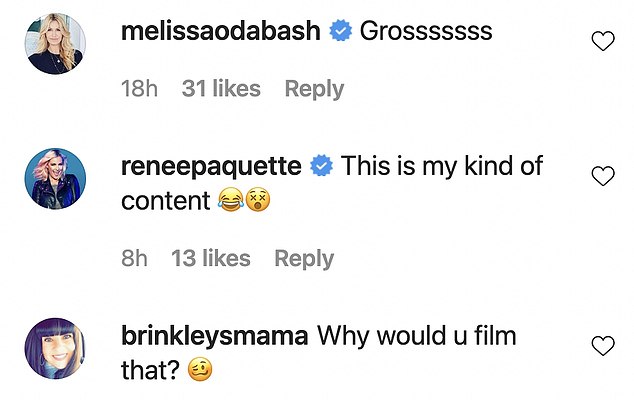 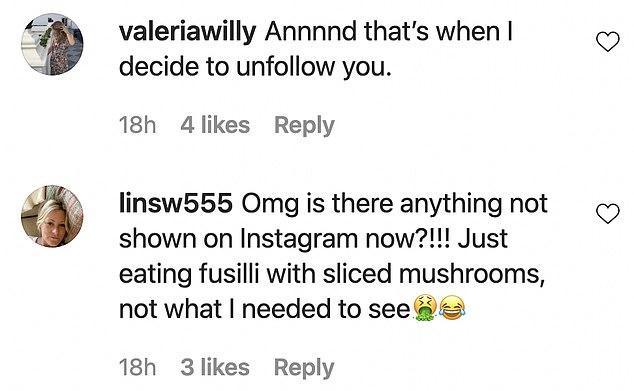 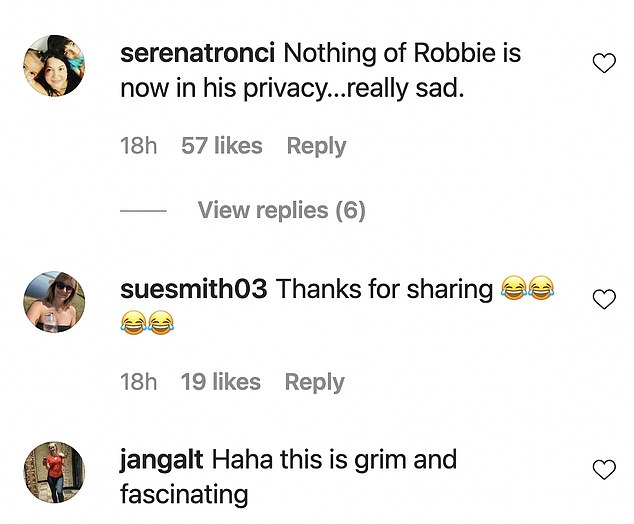 ‘Why would you film that?’ Some followers were left horrified by the grim upload and seemed to think it wasn’t appropriate for social media, while others were all for it

It’s claimed Robbie will relocate to Australia to help work on the movie, with sources claiming the project is part of an ‘$80million (£42.8m) deal’ to ‘continue injecting money into the film industry’.

Director Gracey has teased that the film won’t be like other biopics, for example Sir Elton John’s Rocketman or Queen film Bohemian Rhapsody which were about musical prodigies.

He instead described Robbie as an ‘everyman’ who has an ‘incredibly relatable story’ about following your dreams.

Robbie found fame as a teenager as a member of Take That and later went on to find wider success when he went solo in 1996.

His biopic reportedly comes off the back of the success of Gracey’s Amazon documentary, titled Pink: All I Know So Far, that follows singer Pink on tour. 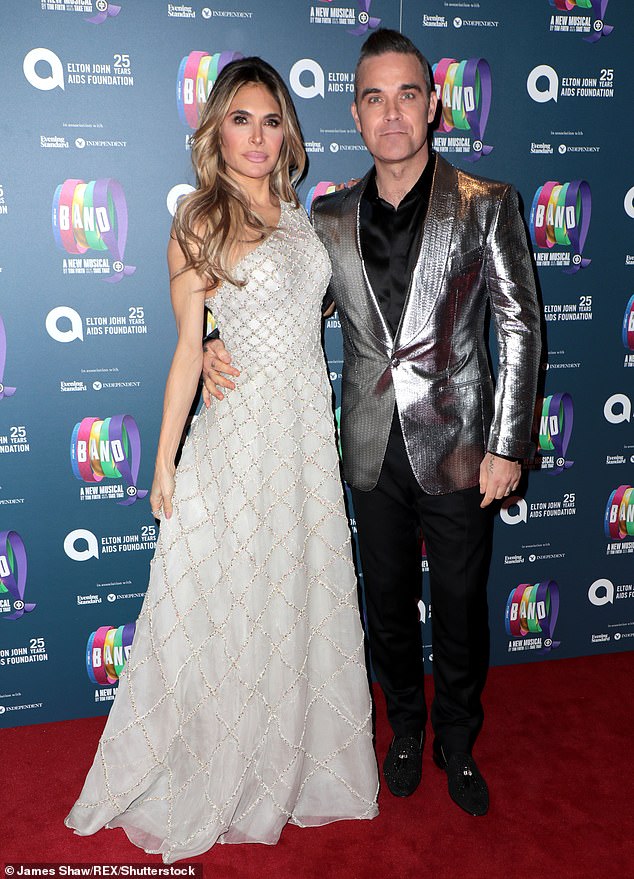 Life onscreen: Robbie is set to start working on his biopic in Australia in early 2022, according to reports, and will relocate to Australia where it’s being filmed (pictured above with Ayda in 2018)